The first place we visited in Paphos was The Tombs of the Kings, which I wrote about yesterday. After a relaxing brunch at a nearby restaurant, we hopped back on the bus and made our way to another big site in Paphos - St. Paul's Pillar. 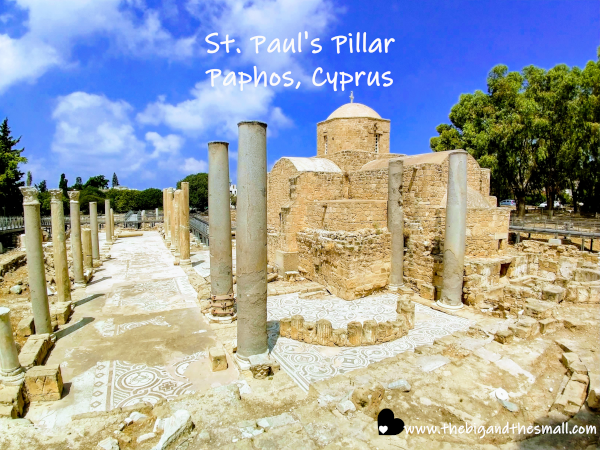 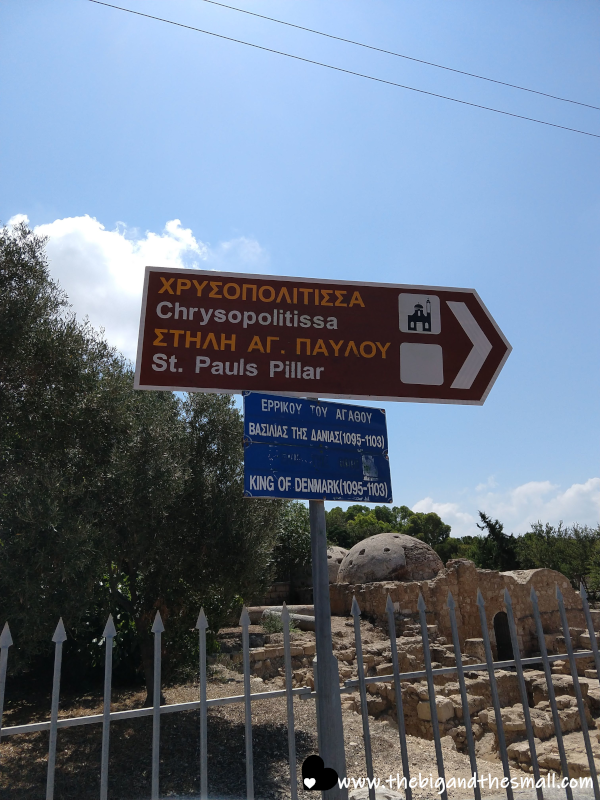 The entrance to this area is one block off a main road, but it feels even further away. It felt like stepping back in time, into a different world, even though there were obvious markers of contemporary life. You don't actually walk among the ruins, but rather on a raised walkway that has been built around the perimeter and leading into the church that still stands. 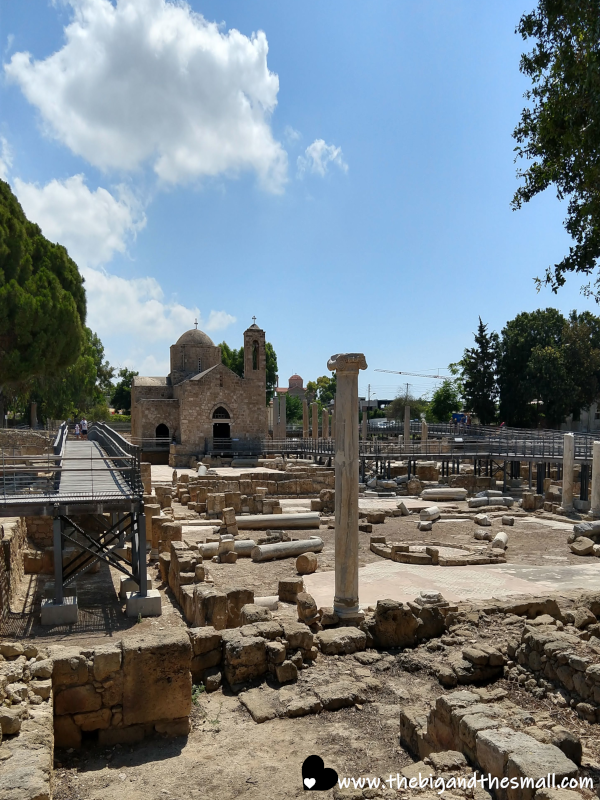 At first I thought that single tall pillar standing in the middle of the above picture must be St. Paul's Pillar. After all it is tall and imposing, and has stood the test of time. Instead, St. Paul's pillar is much smaller and unassuming; in fact, if you aren't looking carefully for it you could easily miss it entirely. The story of this pillar can be found in the Bible in Acts 13:6-12, which I opened up in an app on my phone to refresh my memory. Paul and Barnabas were sent to Cyprus to spread the Gospel, as they had been doing in so many places. They arrived on the island and began preaching in the Jewish synagogues. As often happened to them, they were received less than warmly by the religious leaders of the day. As punishment, for daring to share the story of Jesus, Paul was tied to this pillar and whipped a total of 39 times. This is believed to have occurred around 45 AD. 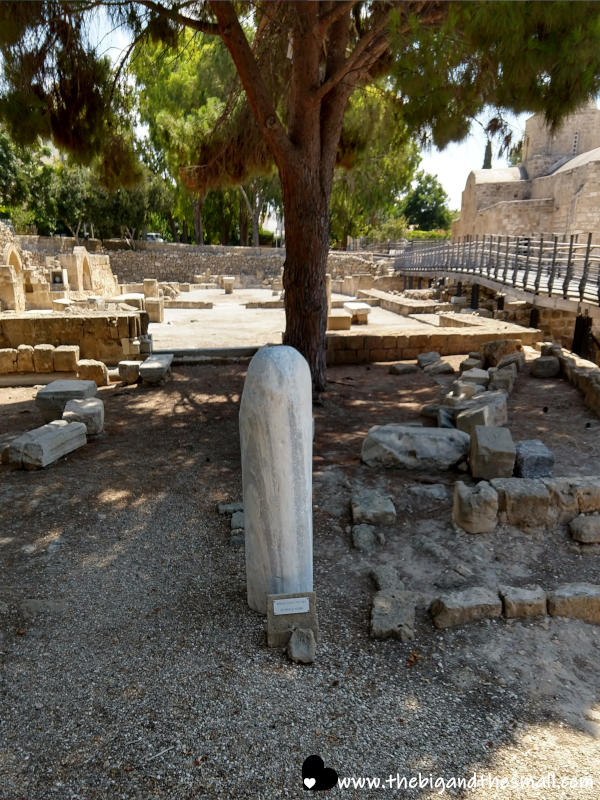 This is my first experience of actually being in a place where a Bible story took place. Many of my colleagues and friends have traveled to the Holy Land, and someday I would like to do so as well, as I have seen how life changing and ministry enhancing it can be. Just this one small experience has had an impact on me; I felt more connected to the words in Scripture than ever before. Walking where St. Paul walked is amazing enough; I can't imagine how amazing it will be one day to walk where Jesus himself walked. 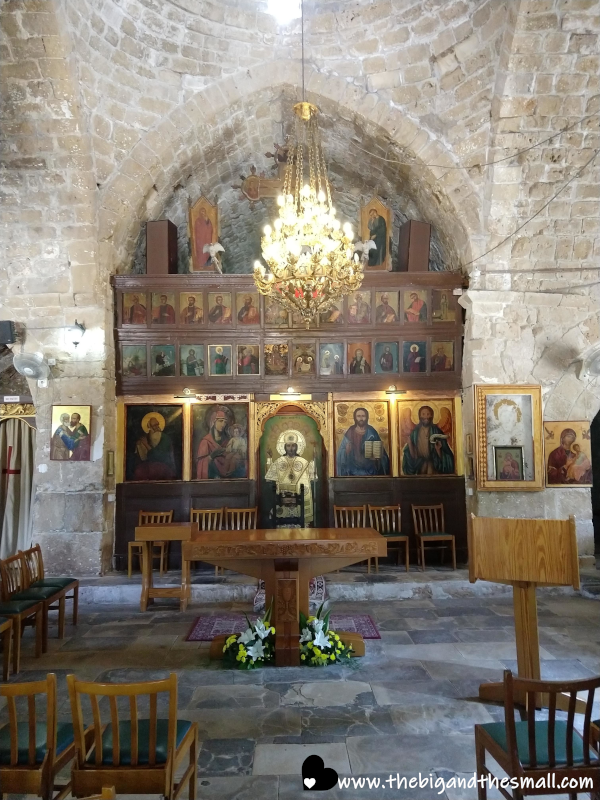 After a while we moved on to check out the church that still stands on this site. It is far from the original structure here, as you can see from the ruins that surround it. Previous incarnations were taken out both by earthquakes and invaders. The current church, as a guide at the entrance told us, is "only" about 500 years old. Only! What really took me by surprise is that this church is not just a historical site - it is an active congregation!  Two in fact! While the space is technically owned by the Greek Orthodox Church, they have agreements with both the Catholic Church and the Anglican Church to hold services here. There are services every day of the week! 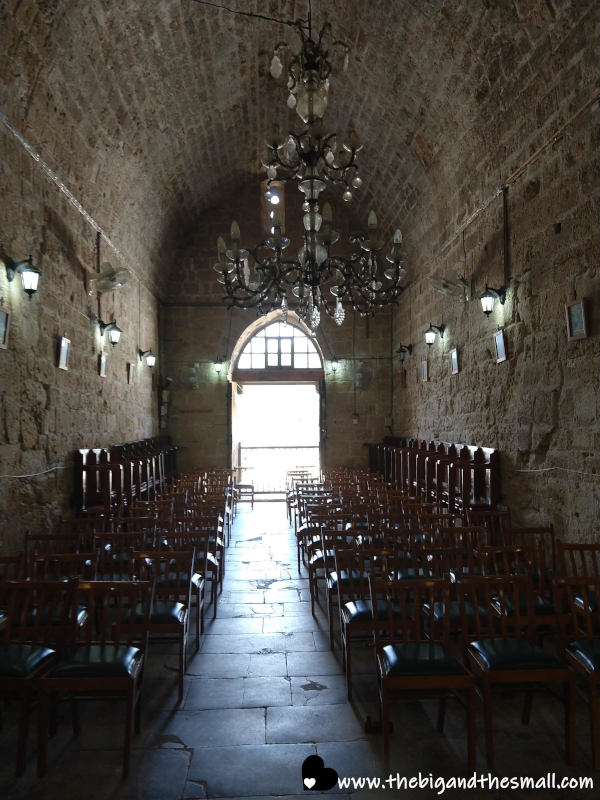 We entered the church around 11:30, and were told there was going to be an organ concert at noon. What perfect timing! We spent a few minutes looking around the church and taking pictures while it was still mostly empty (I asked if that was ok first). The church has been modernized slightly with electricity and speakers, and I suppose the organ isn't 500 years old. Yet it still retains much of its old world charm, stone walls, arched ceilings, old artwork. 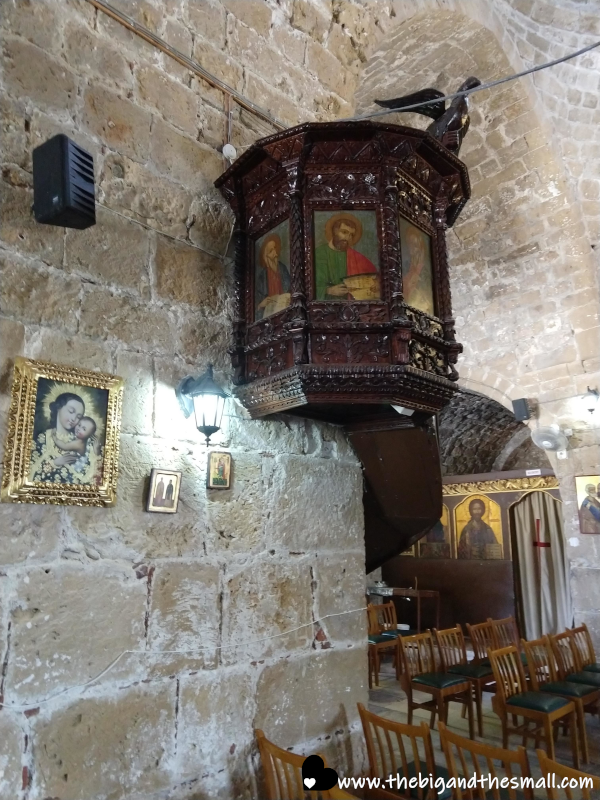 Perhaps my favorite piece of all was this old pulpit. It has a spiral staircase leading up to it and sits about 10 feet in the air! I imagine that before microphones this helped the preacher to take advantage of the acoustics of the building and allowed for everyone to hear him speak. I so badly wanted to walk up and see what the view was like from up there, but alas, the stairs were roped off. I've never seen such a high pulpit and can only imagine what it would be like to preach from one. That also made me think about what it would be like to preach at this church in general. I think I would find the history of the place intimidating. I mean, imagine, preaching in the same place St. Paul himself once preached! Incredible. I suppose after a while the uniqueness of the place wears off as you are there day in and day out, but it still seems to be an awesome responsibility.

We had some time to pass before the concert started so we set out to finish walking around the perimeter. At one point we paused to admire the church and as we were speaking to each other, someone came up to us and asked if where we were from. We said from the US, Iowa to be exact, and gestured to the Iowa State shirt Joel was wearing. The young woman was so excited to meet us - it turns out she is also from the states (Texas) and she is married to an officer in the British Airforce who is stationed here in Cyprus, and she said she NEVER meets Americans. She was visiting the site with her mother, so the four of us got to chatting about where we were, why we were all in Cyprus, and bonding over our commonality of being Americans in a foreign country.

Here is where the really awesome part happens. I mention to them that this site is really special for me to visit because I am an ordained elder in the United Methodist Church. The mother gasps and goes, "Really?! I am an ordained deacon!" I mean, what?!? Talk about a God moment. We just happen to visit this place at the same time, be at the same place on the large perimeter and start talking to each other? It was amazing. We chatted for as long as we could, and before we parted (us for the organ concert, them for lunch) we shared contact information so we can stay in touch. The daughter who lives on the island offered to show us around sometime in the next few weeks, so hopefully we can make that happen!

We returned to the church for the concert and it was lovely. The player wasn't the most technically perfect organist I've ever heard, but listening to familiar music in such an ancient place was moving for me. Sometimes in places like this I get overwhelmed by the history. I mean, this church building is older than the entire concept of the United States. As Americans I think we get this idea ingrained into us from a very young age that America is this powerhouse in the world, the best country on earth, and it makes it seem like we are some ageless monolith. But there is a whole lot of world outside the US, and a heck of a lot of history that happened before it existed. It's good to be reminded of these things.

So that's the story of our visit to St. Paul's Pillar. If you are ever in the area this is a must-see, whether you are religious or not. I have more to share about Paphos, so be sure to check back in tomorrow!

In the meantime, have you ever been to a place mentioned in the Bible? Where and what was it like for you? Or, what is your best "met a stranger and had something crazy in common" story? The people you meet is one of my favorite things about travel!

I remember thinking that very tall pulpits were pretty common in Israel. My favorite was in the Old Jaffa, Tel Aviv. An elder who let us in right as they were shutting down their daily tourist hours, told us that the pulpit was carved from one tree.  I've only ever preached from one tall pulpit and that was at the Upper Room in Nashville. It was terrifying (being afraid of heights) but gratefully, there was a balcony that was across the chasm from the pulpit so I just pretended that I was eye level with them and ignored those below. Probably not the most professional preaching attitude, but it kept me from white-knuckling the edge for the whole thing. I was wearing my most confidence boosting red heels at the time, and I remember regretting the choice on the stairs down from preaching.

A tall pulpit carved from one tree? That sounds amazing! I am not afraid of heights so I would LOVE to preach from a tall pulpit. Sounds like you had a good technique for handling it even if they people below felt a little neglected, lol. I definitely would have trouble navigating pulpit stairs in heels though so props to you for that. Of course now that I'm in my thirties I don't even own a pair of heels anymore and I doubt I ever will again. I envy the ladies who can still wear them but I'll just rock my flats and wait for the day I get to preach in a ridiculously tall pulpit :)