In order to stay within our self-imposed budget of €10 a day we've been doing a lot of eating at home. One of the huge perks of house sitting is that eating at home is pretty easy - we have a full kitchen at our disposal! However, one of the huge joys of traveling (especially for people like us, who love to eat) is trying all the local food. So we are trying to find a good balance between eating at home and eating out. 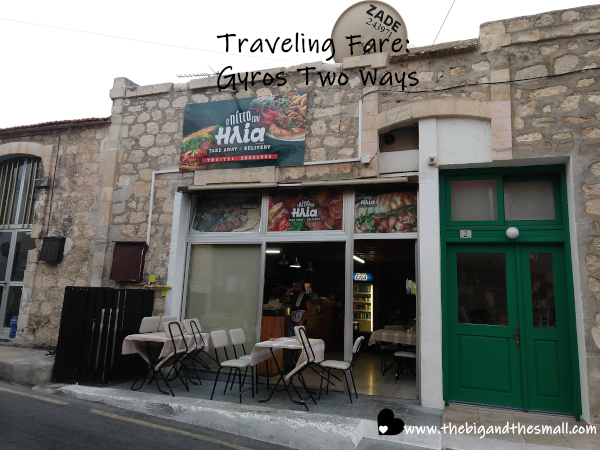 Last week we had tea with one of the neighbors who are good friends with our hosts. They live just down the street in a villa instead of an apartment, and they were just as fun to chat with as our hosts. While we were there, Dave and Denise gave us the scoop on some of the best places to eat in Peyia, so I started making a list of places we have to go. The local gyro place made first place on that list for two reasons: 1. Joel and I love gyros (we used to a buy a frozen box from Aldi that was fantastic, and eat gyros at home a couple times a month), and 2. This place is inexpensive! According to Dave and Denise we would both be able to get gyros without even going over our daily budget.

We were also told that there are two types of gyros available - the first is the typical Greek style gyro which we are used to, and the second is a Cypriot style gyro, more unique to the island. Well, with that information we knew what we had to do - get both gyros and have a taste test! The only downside to this mission - we would have to walk up the hill to the town at lunch time, which also happens to be the hottest part of the day. Ugh. We did go early, getting there around 11:15, hoping and crossing our fingers they would be open already. 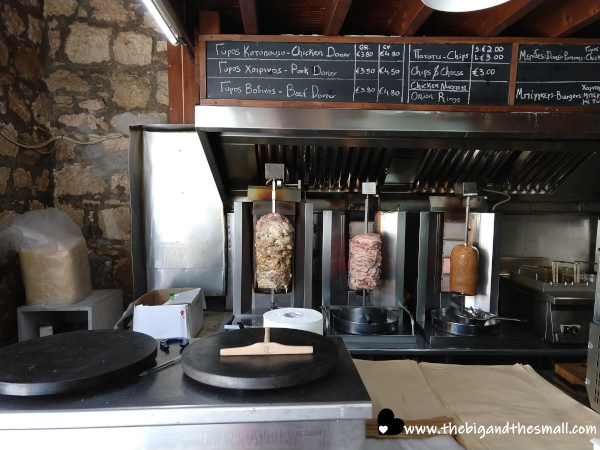 No such luck. The doors were open and the meat was roasting, but the proprietor told us he doesn't open for business until noon so we would have to come back. So we walked a little further to find some shade and found a place to sit down. One good thing about the heat here is that the shade really does make a difference, you can feel the temperature drop as soon as the sun isn't beating down on you! I settled in to wait while Joel went to look at some other places, and he surprised me by coming back with a chocolate croissant! 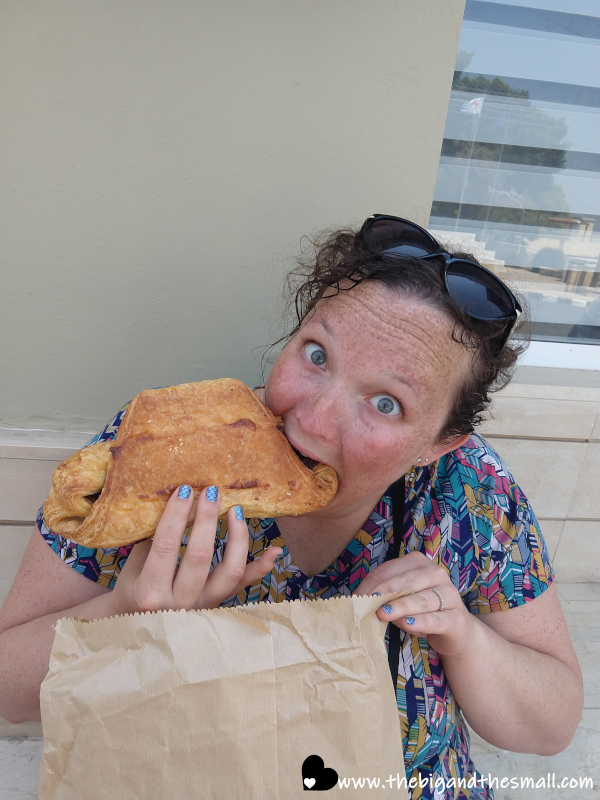 I hadn't eaten since breakfast and who am I to say no to dessert first? My grandmother used to always order dessert first at restaurants, so every time I do this it always makes me think of her. With dessert out of the way I was ready to get my hands on some gyros, so we headed back to the restaurant a few minutes before noon. The name of the place on the sign is "HAia" although that first A is probably not an A but a Greek letter. The locals (we had to ask for some last minute directions at the bakery) pronounce it "Helios" and said "it's like the Greek word for sun". 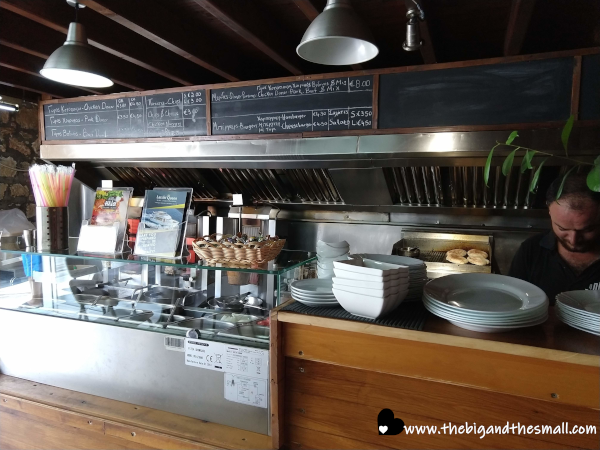 Once inside the owner was excited to see us again and told us it would be another 15-20 minutes before our food could be fully ready. No worries! We have started getting used to things being on "island time" here. The grocery story regularly opens 20 minutes after the posted time, the fruit market was still closed an hour after opening time the other day, and when we went to coffee with the neighbors they were straight up surprised that we showed up exactly at the agreed upon time. During our wait we sat on the chairs outside that had just enough shade, which was quite pleasant until the sewer guys showed up to do some work. The smell was, um, unpleasant. This event made us realize that we should take our gyros to go and eat them at home, so I set off down the hill and Joel stayed to get the food then followed me home. 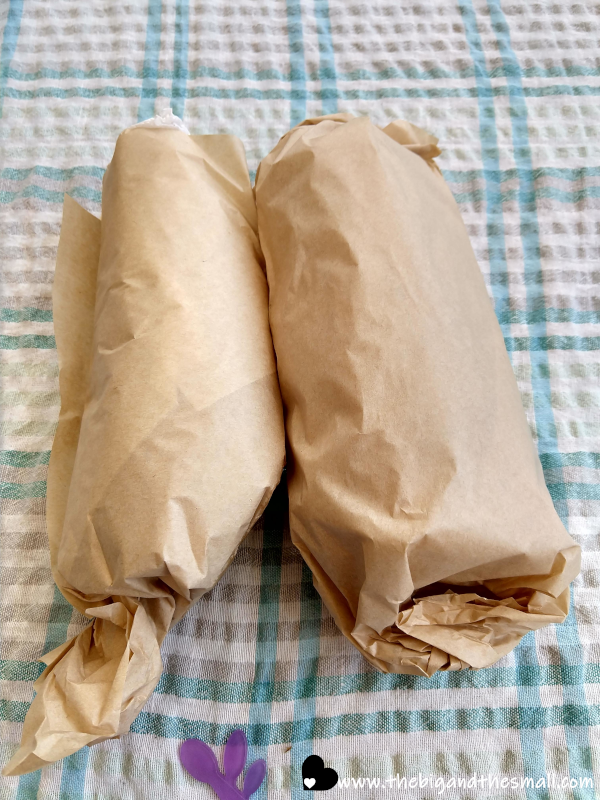 Before digging in I took a picture of the gyros all wrapped up, side by side, so you could see the difference in size. We chose to get both gyros with chicken, so that we would really be comparing "apples to apples" ("chicken to chicken"?) when it came to comparing the two types of gyro, rather than just deciding which type of meat we preferred. Once unwrapped it was clear to me which was the Greek style and which was the Cypriot style. 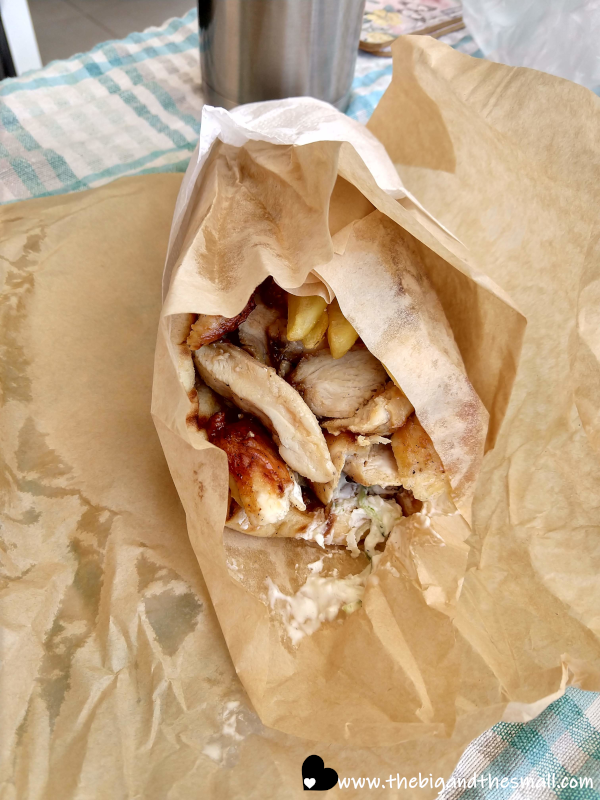 The main difference seems to be in the bread. The Greek gyro had the typical Greek pita, toasted and folded in half. The pita was crisp on the outside and fluffy on the inside, the perfect base for the deliciousness of everything else. The gyro was stuffed with chicken, tomatoes, lettuce, tzatziki sauce, and interestingly enough, topped with fries! Or as they are called here with the British influence, chips. 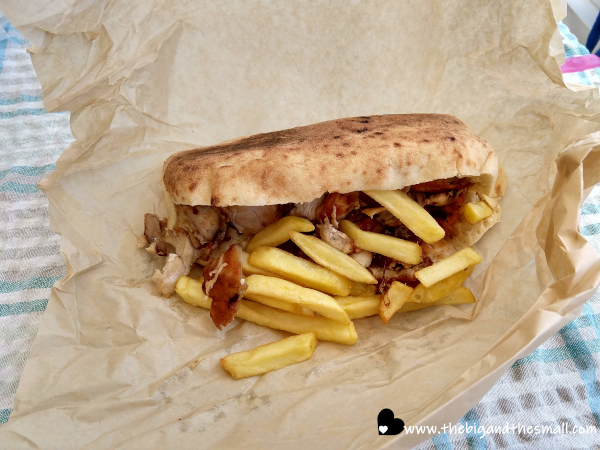 The Cypriot gyro was the bigger of the two because the Cypriot pita is bigger. We have bought similar pitas at the store here, they come in uneven sizes, but splice nicely with a pocket in the middle. The bread itself is much thinner than the Greek style, and it really ends up being mostly 'crust' rather than having a fluffy bread like middle. Which isn't really a bad thing as it makes the fillings and toppings the star of the show! This one was filled the same way as the Greek style.

Not Pictured: Us chowing down on these gyros! After walking up the hill and back in the sun you did not need to see how sweaty we were in a post about food, lol.

Both gyros were delicious. The chicken was marinated perfectly, it was incredibly flavorful and so juicy! The toppings really added to the meat, and the sauce was excellent. My biggest complaint is that the sauce wasn't distributed evenly so some bites had a ton while others were dry. If I were to go again I'd probably ask for extra sauce on the side so I could add it where I wanted needed more. Also I chose to take the fries off and eat the separately as I thought they distracted from the flavor of the gyro, but Joel kept his on. Between the two we did have a favorite however...drum roll please...we both preferred the Greek style!  Sorry Cyprus! On the one hand the Cypriot one really let the filling be the star, but the bread was dry enough to distract from the experience. In the Greek one the pita added to the flavor of the gyro as a whole rather than detracting from it.

The whole experience was great (minus walking up the hill at noon) and if it fits in our budget I plan to eat at least one more of these gyros before we leave. If you are ever in Peyia, Cyprus, this is a restaurant you don't want to miss!

So what about you?  Have you had gyros before? Any style other than Greek? What's the best gyro you've ever had? Tell me all about it!