The Tombs of the Kings - Paphos, Cyprus 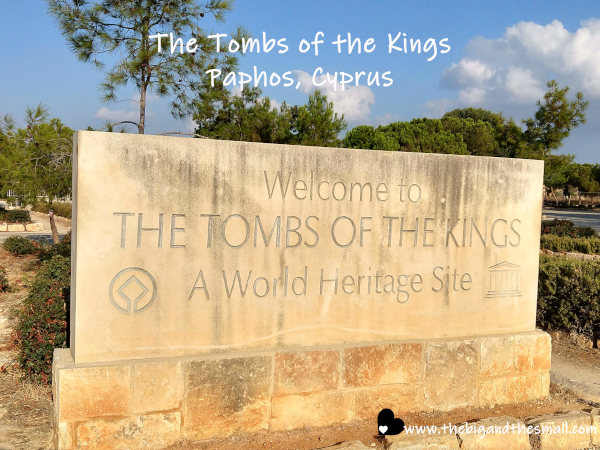 Yesterday we decided to get out of our cozy Cyprus routine (which mainly consists of dog walking, naps, and doing our best to avoid the heat) and take a bus to the nearest big city to see some of the amazing history of the island. A neighbor our hosts are friends with offered to watch the dog for the day, so we didn't have to worry about getting back in time for her, which was nice. We set out with the goal of seeing two major sites: 1. The Tombs of the Kings and 2. St. Paul's Pillar. We got to see both of them, and of course some food and other travel adventures along the way, so I will write about our day trip over the course of the next few posts! 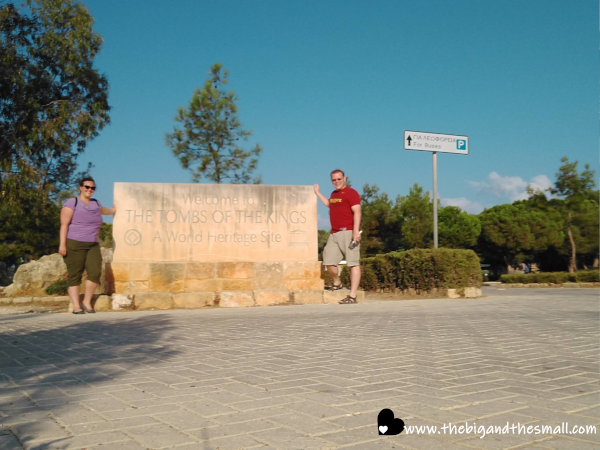 Today is all about The Tombs of the Kings. What a grand name, right? It sounds like the setting for something truly majestic, and in reality, it was. We were hoping that entrance to the tombs would be free, but there was an entry free of €2.50. That's about $3ish, so still relatively inexpensive, and well worth it. 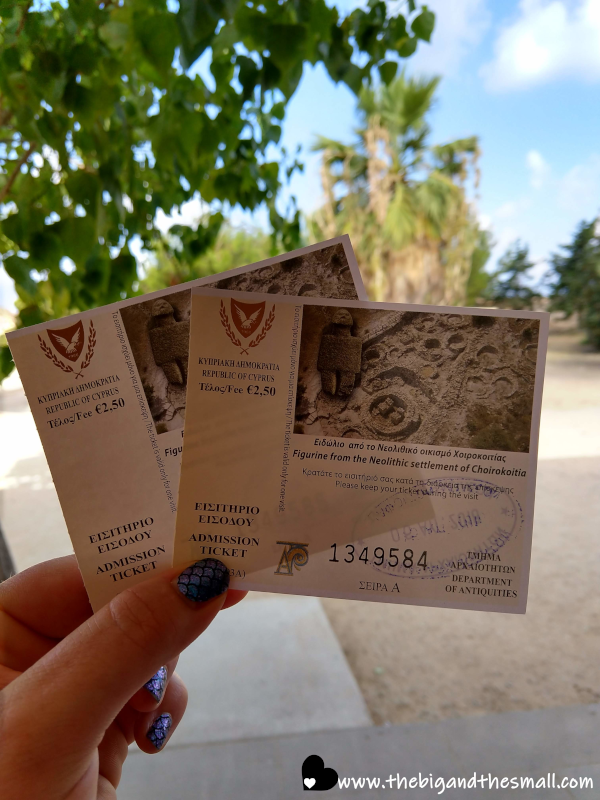 One of the first things we learned upon entry is that the title "Tombs of the Kings" is actually a bit of a misnomer. As far as history knows, no royalty was ever buried here. Rather they were resting places for rich citizens and high officials of the government. The site earned the royal moniker because of the monumental character of the tombs. According to archaeological evidence this site was used during the Hellenistic and Ptolemic periods. 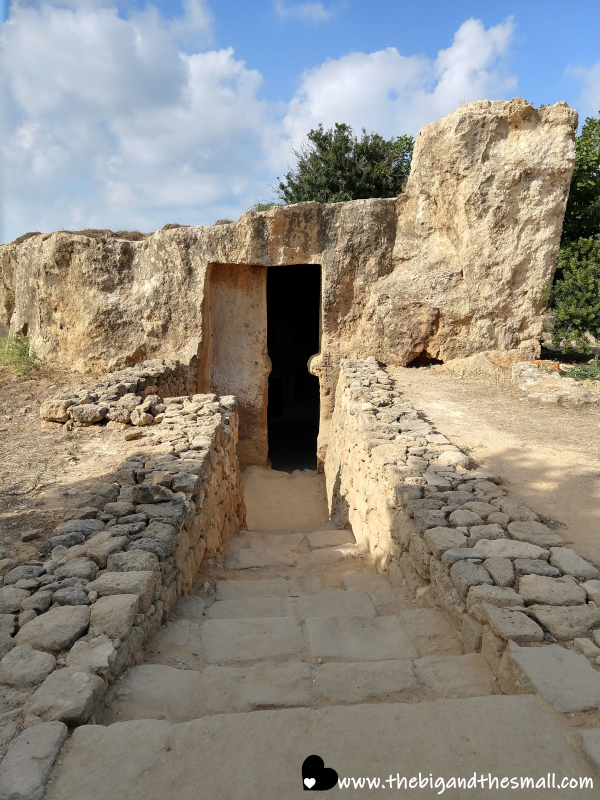 The first tomb was immediately to our left when we entered.  The uneven stone steps took us down into the cavern, where immediately the temperature dropped. The space was designed with a wide space in the center and resting places carved out of the sides all around. The architecture of the tombs imitates that of the houses of the same period. 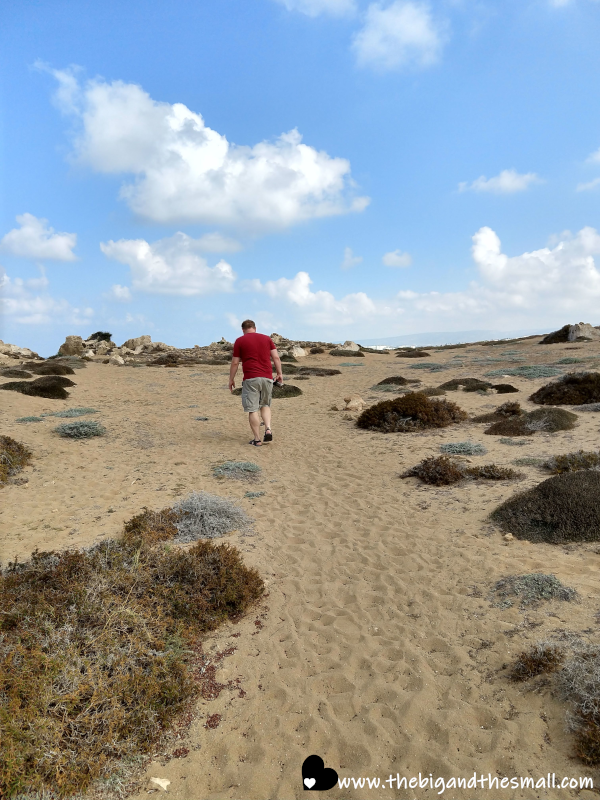 After we left the tomb we continued on to our left, making our way around the park counter clockwise. The ground starting rising and rising, and soon we were walking uphill. The ground became rockier and harder to navigate, but it was worth it getting to the top. From up here we could see back towards the entrance and many of the tombs, as well as out towards the Mediterranean sea. The view was gorgeous and easy to see what someone would choose this as their final resting place. 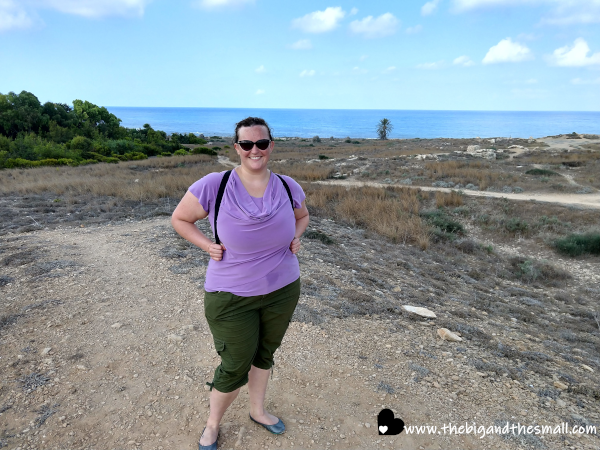 (Pardon my sweaty mess look, it was hot and all the clouds had disappeared!)

As we moved downhill and got closer and closer to the water the ground turned from hard packed dirt to sand. There was a fence just before the beach to keep people from entering without paying the entrance fee, but it hardly detracted from the beauty of the area. We walked along the fence for a while, then turned our attention back towards the center of the park. 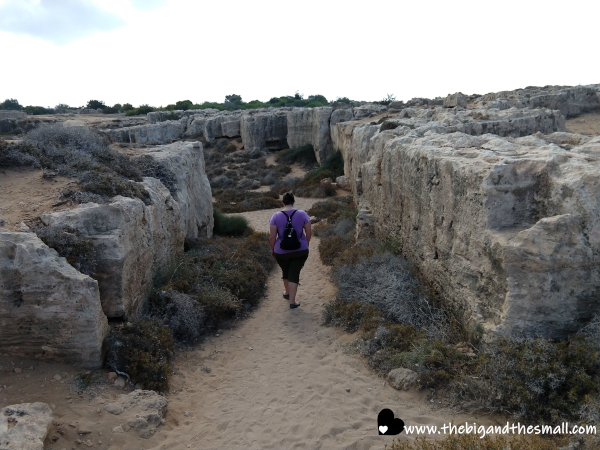 To our right was an area that descended into a grand open sandy area, with rock walls all around. It was harder to tell if this one was more a natural formation or man made. There were holes dug into the walls that were clearly man made, and must have been the resting places for some of the less wealthy persons who made it in here. It was less grand than many of the tombs, but still breathtaking. 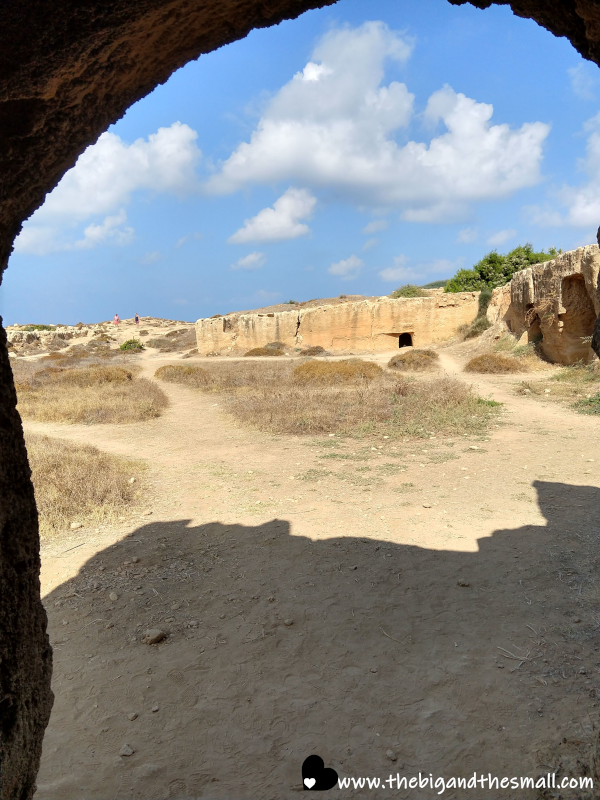 From there we hiked up and out and back down into another section. Here the buildings were such that you could walk into them from the ground level, or go up and around onto the roof. We took advantage of the shade to rest a bit, and I worked on getting the sand out of my shoes that had accumulated when we were by the water. Joel decided to climb up onto the roof so he could look down at me, and we grabbed quick pics of each other. 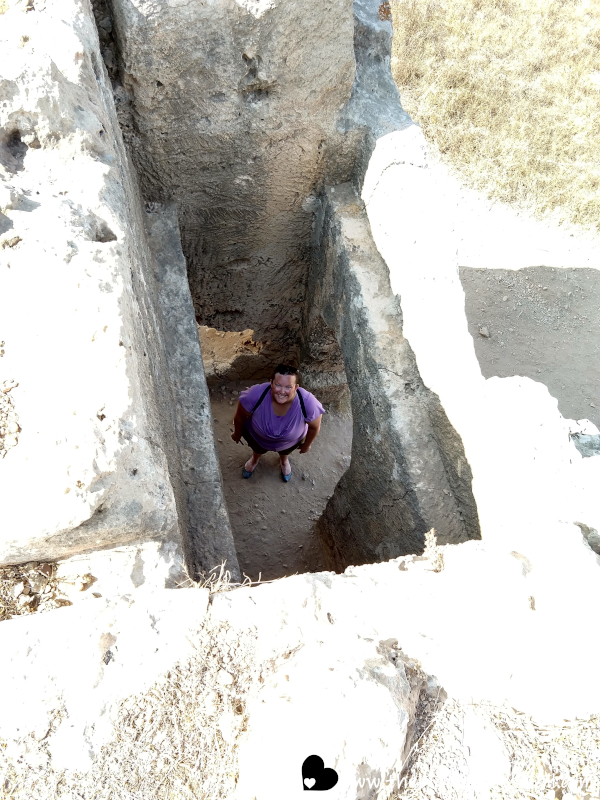 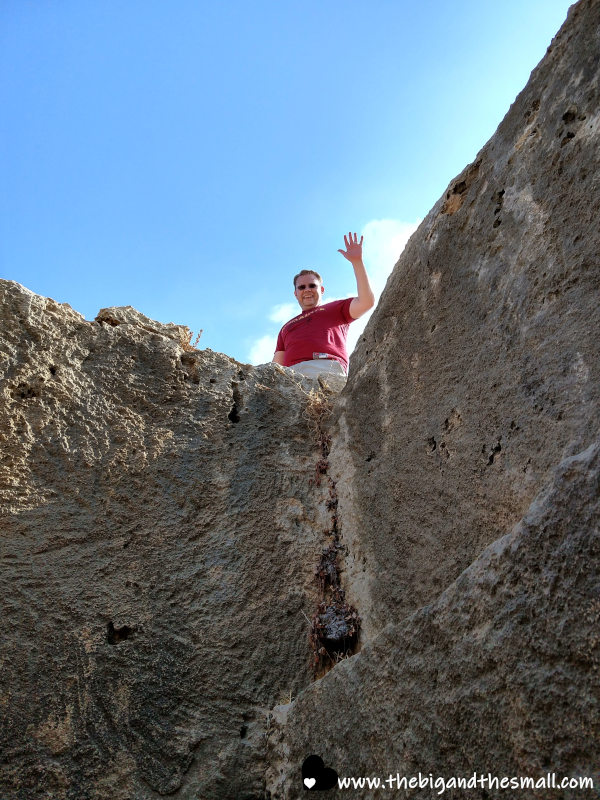 After we were ready to brave the sun again we moved over to an area that seemed to have the grandest tombs of them all. We had to walk carefully over some walls to get to this section, it was a bit of a balancing act. 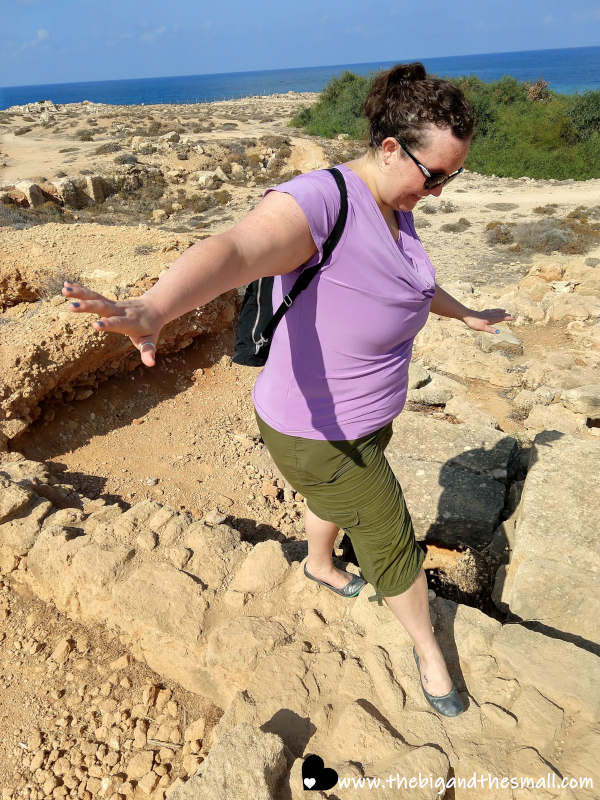 These tombs were much larger than the first one we entered, and built deeper into the ground. The stairs to get into them were uneven, some steps just a few inches and others a foot or more. Once at the bottom you could see that rather than being one enclosed area, they were huge and made up of several rooms. There were pillars holding up each section; some of the pillars were rounded and smooth, while others were square and rough. 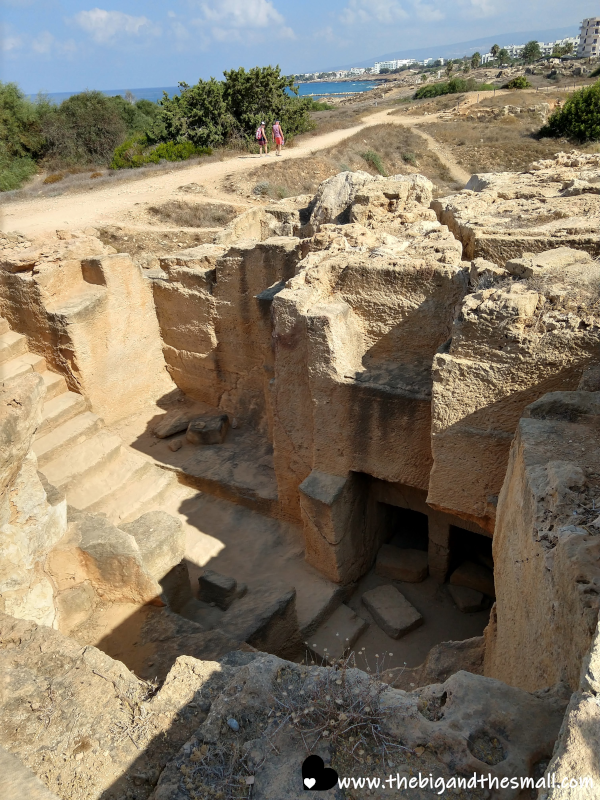 Perhaps the most interesting part to me was the way the tombs connected to one another. Many parts of the area were roped off, so we couldn't walk through all of them, but you could see through the openings to the other side. 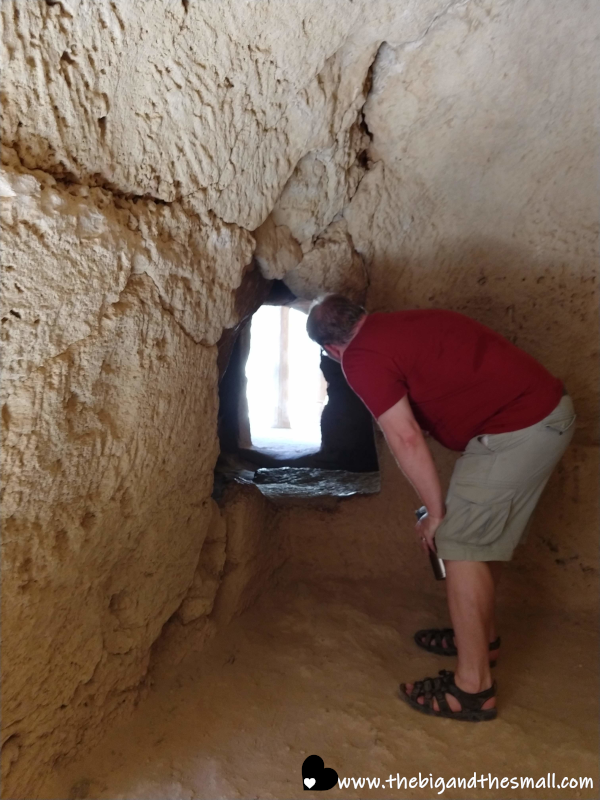 After we thoroughly explore as much of the tombs as we could, we were ready to get out of the heat and set off to find a restaurant. If you ever come here yourself I recommend coming as early in the day as possible. You want to avoid the straight on sunshine of the day as much as you can! Overall I'd say this historical site is well worth seeing if you are in the area, and might be worth a special trip if you are anywhere on the island of Cyprus.

Tomorrow I will share even more about our adventure in Paphos; I can't wait to tell you all about St. Paul's Pillar and our time there!

It sounds like some of the areas might have been restricted if they were governed by the often overly cautious US's safety precautions/lawsuit liability advice. Were there any parts that felt like they were potentially risky?

I don't think that parts that were roped off seemed overly risky.  Honestly some of the stairs down into the tombs felt much more dangerous! Joel laughed at me for walking down more than one of them old lady clinging to the wall style, lol. I'm guessing they were roped off just to avoid more wear and tear?