I definitely owe you all several posts about our adventures with Steve last week (we visited three new towns!) and I promise those are coming soon. However, as the Superbowl just happened last night (also known as early this morning for those of us on this side of the pond) and my newsfeed is full of reactions and arguments about, in particular, the halftime show, I thought I'd share about that, first.

When the year started I really thought that when it came time for the Superbowl this year Joel and I would be in our own flat in London. However, things have been delayed and delayed again, so we are still staying with our angels, Joan and Vince. I hadn't planned ahead much for watching the game or, let's be honest this is the most important part, what we would eat during the game, so on Sunday afternoon we went to the store to get supplies for Superbowl snacks. (This is a bad idea. Grocery shopping on the weekends is the worst!) We survived our trek through Aldi and returned with the ingredients to make cheese dip, deviled eggs, and ranch dip with veggies.

Joan had been craving deviled eggs, so that's why we went for those. I made myself choose between wings and cheese dip and I'm glad the cheese dip won because I made one of the best versions I've ever made (mostly on accident, I threw in some leftover corn and salsa that really made it awesome.) The flavoring for the ranch dip was actually courtesy of the care package we got in France way back when, and yes, I have carried those little ranch packets all around the world just waiting for a suitable occasion. Everything turned out delicious! 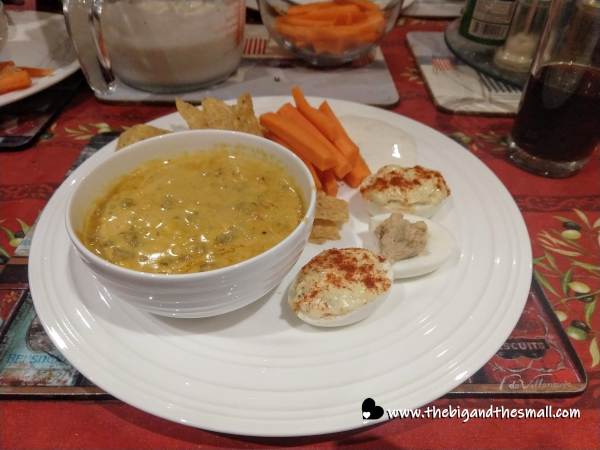 We ate at a normal dinner time of 6PM, then around 7:30PM Joel and I went to bed. Kick-off wasn't until 12:30 (or so we thought, time zone math is hard and we ended up missing the first quarter) and we knew we would enjoy it more if we got some sleep. We woke up around midnight, figured out how to stream the game, and settled in on the daybed in the kitchen to watch the game. I cannot stress enough how much I don't care about sports, but this is the one football game I like to watch every year. Yes, mostly for the commercials and the food.

This year I was a bit more invested in the game as I actually liked both teams. The Kansas City Chiefs are a Midwestern team so I was initially rooting for them. Then I learned the San Francisco 49ers had the first female coach to ever coach in the Superbowl, so I was rooting for them, too! I also appreciated that the game was well-played (as far as this novice can tell) and by that I really mean that it wasn't just one side stomping all over the other. I hate when one team runs away with the whole thing and you can see the ending by halfway through. This game was really watchable through the final moments of the final quarter!

Speaking of watchable, I loved the half-time show. It did not even cross my mind that it would be controversial in any way until I opened my Facebook feed and started seeing all the reactions pouring in from people who loved it and people who hated it. Personally, I thought the dancing was incredible, I love that J-Lo showed off the pole dancing moves she learned for the movie Hustlers (if you haven't seen that movie yet, I recommend it), and I appreciated the diversity represented on the stage.

Apparently, some people thought the whole show was overly sexualized. Um, what? You will see skimpier outfits when you take your kids to the pool this summer, I guarantee it. Most of the controversy I see seems to be around J-Lo's pole dancing moves, claiming that it just isn't suitable for children. Here's what I have to say about that.

Pole dancing is not inherently sexual.

Yes, in most of American culture, it is most often associated with strippers - women who remove their clothing for money. (As it was in the movie J-Lo learned her moves for. But also, if you watch the movie you can see that it was actually pretty empowering for the women in a lot of ways.) But if you think about it, just the act of climbing up a pole or making moves around it is not inherently sexual. J-Lo did not remove her clothing on national television. The pole dancing she did was not sexual.

Cirque de Soleil performers do incredible moves on poles and no one decries them as being sexual. Kids climb poles on the playground and that isn't sexual. Firemen use poles. Pole dancing has even come in vogue as a workout routine because it is not inherently sexual. If you watched J-Lo's moves on the pole last night and thought it was too sexy for TV or for children that's on you. A friend posted that her 5 year old saw it and said something along the lines of "Wow! She's really strong for climbing that pole!" That's what kids see. They only see the sexual part if you put it out there for them.

I thought what J-Lo did was incredible, admirable, and I could only dream of being that fit at 50 years old (I am not now, at 33.)

There is a lot more I could say on this topic but I think I'm going to leave it at that. I would love to chat about this with you if you have a different opinion.

I hope you enjoyed your Superbowl Sunday!