Last week Steve came to visit us which means there was some adventuring to be had! Our first stop was St. Albans - a town a mere six miles away from where we currently and, incidentally, where Steve was staying in a hotel. We drove over on Tuesday afternoon to explore the town and first up on our list was the St. Albans Cathedral. 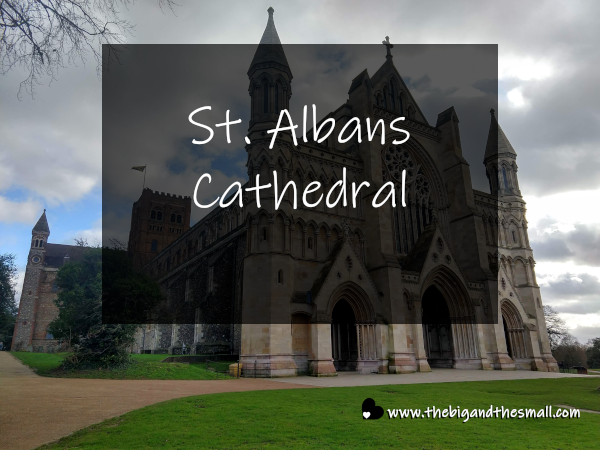 Near the cathedral is a structure known as the Abbey Gatehouse. This was built around 1362 and was once the main entrance to the Abbey of St. Alban. This and the Abbey church (which is now the cathedral) are all that remains of Britain's leading medieval monastery. This information was available on a sign near the gatehouse: "The gatehouse was attacked in 1381 during the Peasants' Revolt - a nationwide popular uprising against taxation and oppressive rule. Local townspeople demanded the abolition of the Abbey's rights over them. After Henry VIII shut down the Abbey in 1539, the gatehouse became the town prison. The Catholic martyr Alban Roe was imprisoned here before his execution in London in 1642." 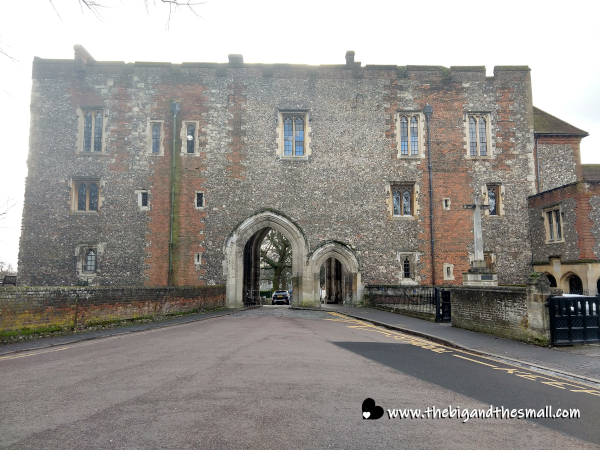 "Look to the right and you can see Romeland where in 1555 the Protestant martyr George Tankerfield was burned at the stake. His statue is in the Cathedral with that of Alban Roe and others who gave their lives for their faith." 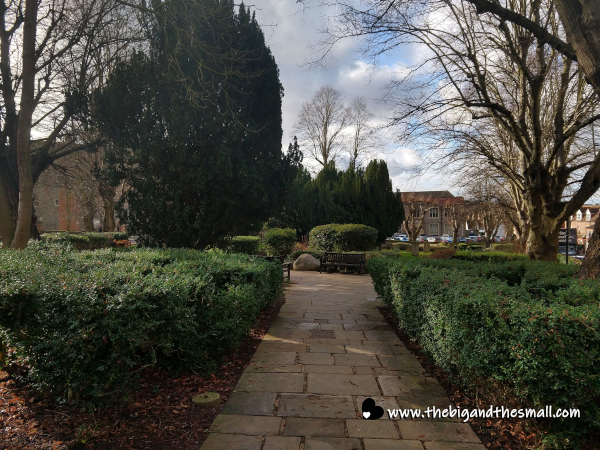 Here is information about the Cathedral itself: "This magnificent cathedral stands on the hillside where Alban, Britain's first saint, was buried. He gave his life for his Christian faith around the year 300. Many generations have repaired and renewed this ancient church since it was first built 950 years ago as part of St. Albans Abbey." From this angle, we are looking at the West End which was rebuilt in 1880 in a grand Victorian style by Lord Grimthorpe, a wealthy local resident. While what he did likely saved the Abbey from complete ruin, the fact that he refinished it in a modern (for that time period) style is still controversial today. 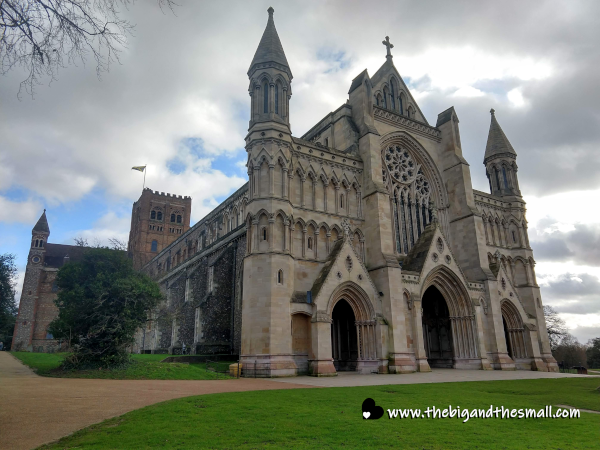 We saw a comparison photo to what was there originally (well, what was left in partial ruins) and while the turrets and embellishments are definitely different these arched doorways were exactly like this. Even if perhaps he should have tried to stick a little closer to the original style, I am grateful he restored the church at all, and to such a level of beauty. 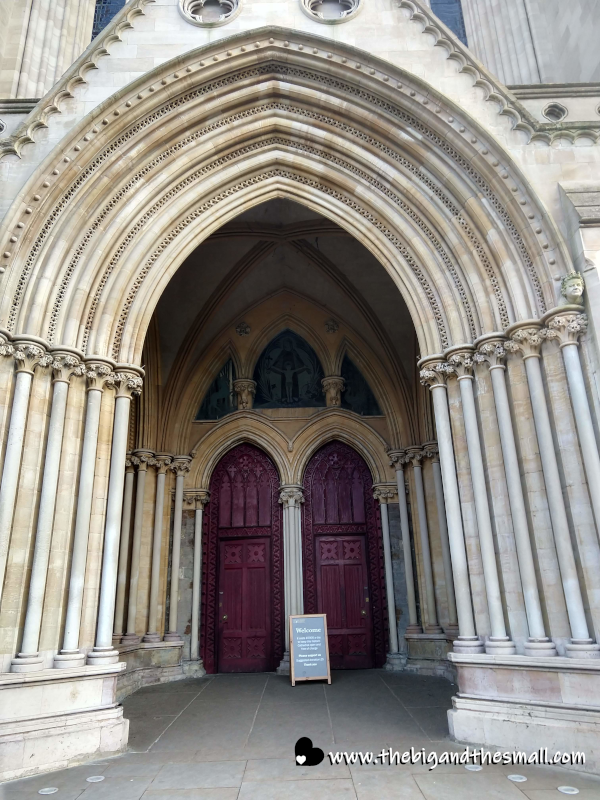 If you thought the outside was stunning, the inside was just as breathtaking. Though the Cathedral is a fully functioning Church of England parish they also recognize their status as a tourist attraction and have regularly scheduled tours as well as volunteers who greet everyone as you enter the church. They also regularly have school children visiting and on the day we were there we saw no fewer than three different groups doing various activities around the church. 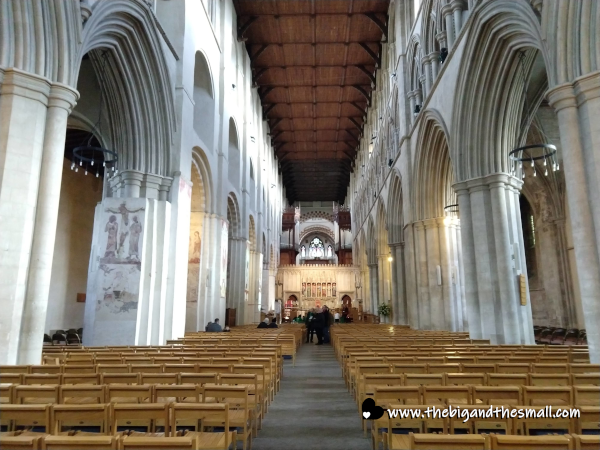 On the side of the main hall are pillars that are decorated with paintings that have survived since medieval times. They are rare survivals and the earliest dates from 1215. "Many colours came from natural plant sources. There are also traces of expensive gold leaf and precious stones such as lapis lazuli and malachite. The first large figure on the left is St. Christopher, today regarded as the patron saint of travellers. He is placed near the original church entrance. Here the pilgrims gave thanks for a safe arrival after a long journey." 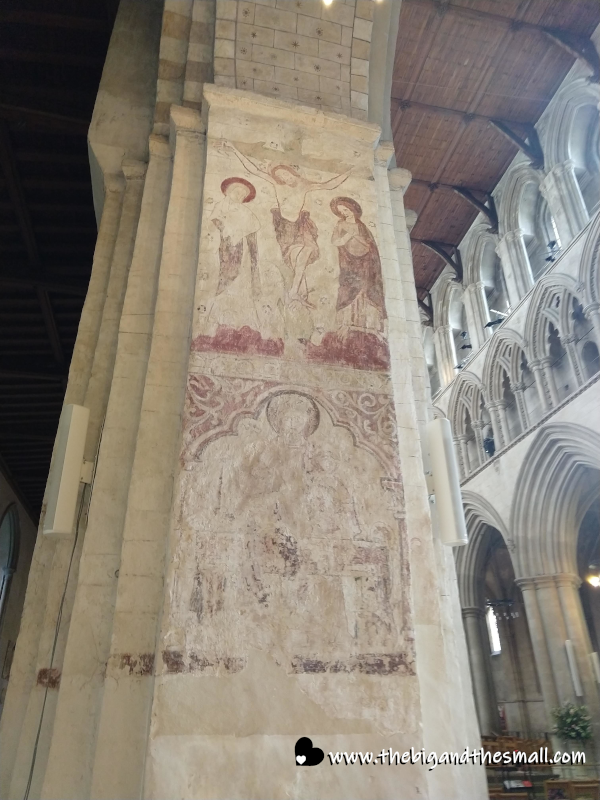 As we moved further into the church the clock struck two and suddenly someone came out of nowhere and entered the tall pulpit nearby. She invited all visitors to pause for a moment to join in prayer. Apparently someone comes to this spot and leads whoever is around in prayer on the hour every hour. I was grateful for the reminder to pause and pray in this beautiful worship space. 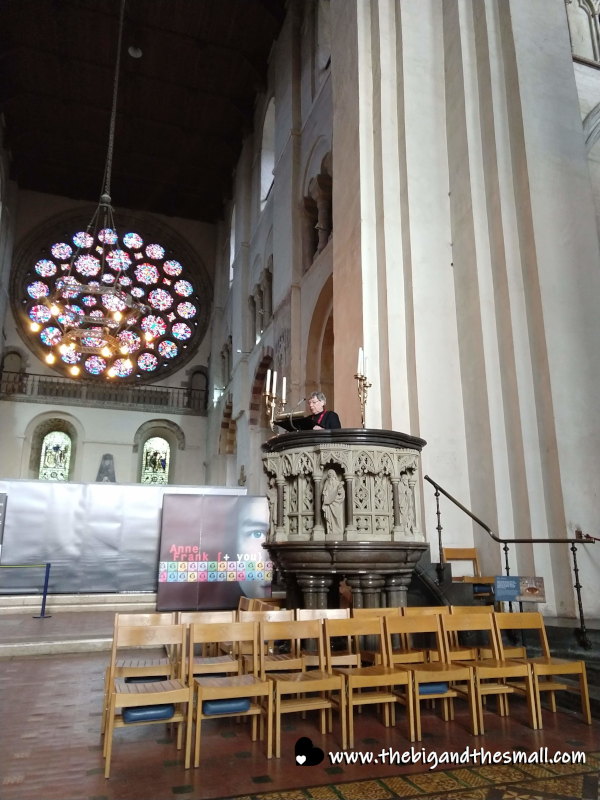 Just behind this area was an entire learning exhibit and tribute set up for Anne Frank and the Holocaust. We spent about half an hour making our way through the displays that showed the life and death of Anne Frank and her family. At the end, it also spoke about contemporary issues that relate to what happened to Anne - continued racism and nationalism that endangers people around the globe.

After well over an hour wandering through the church and the exhibit we made our way back outside through a different door than where we entered. We started moving back towards the town center when we spotted a door to a secret garden to our left. Walking through the garden afforded us this incredible view of another side of the Cathedral! 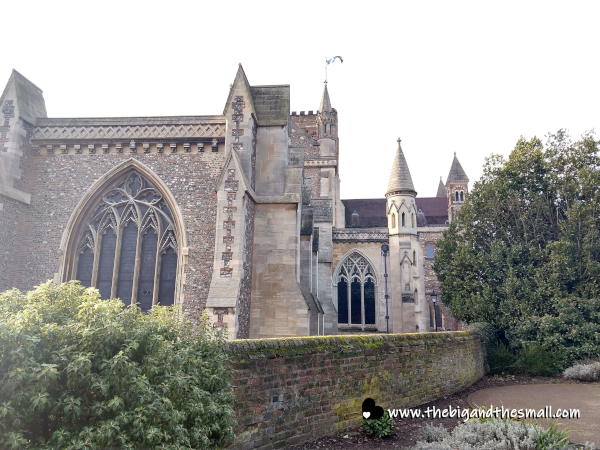 I can only imagine how amazing it would be to live in a town where a gorgeous historic structure like this is still an important part of everyday life. For now, I'll just enjoy it when I get to visit!