Though our flight to Thailand was uneventful and felt like first-class thanks to Turkish Airlines, it was still an overnight flight on which we got very little sleep. We were safely ensconced in our hotel room by a little after 12 PM, local time, and the first thing on the agenda was to take advantage of our comfortable king-sized bed! Well, after a shower for me. We slept long and hard, finally waking up around 6 PM. We both felt like we could have slept all night but I didn't want us to accidentally get on a bad schedule (we had just shifted four hours further East) so I made us get up and go explore! 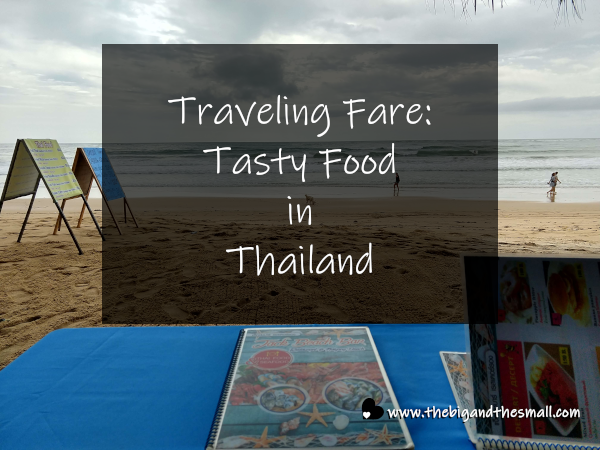 The weather wasn't great on our first day - it rained most of the time. Not gonna lie I was okay with that as it made me feel less guilty about sleeping away our first six hours in Thailand. When we ventured out the rain was still threatening but was holding off for the moment. We grabbed the very large umbrella provided by the hotel, just in case, and stepped off the hotel property to explore. Right across the street was the beach, and about two minutes down the road we came across a great shopping/nightlife/restaurant area. When we booked the hotel we knew the beach was close (thanks Google Maps!) but we didn't know about the rest of it so that was exciting to find!

At first, we had decided we weren't going to eat anything that evening. Traveling usually gets us off of our intermittent fasting schedule and we try to get back on track as soon as we can after arriving somewhere. But as we walked by multiple restaurants with incredible smells wafting from them I suddenly realized...that was stupid! We only had four days in Thailand and since breakfast was provided by our hotel, that meant only four chances to eat out and try the local food (we usually only eat twice a day.) Were we really going to just skip one of those meals? As soon as I explained that logic to Joel he agreed that the answer was no. Also, by this point, the rain was pouring down hard so we had even more reason to take refuge in one of the many local restaurants.

We had looked at a lot of menus as we wandered around the area, and they all seemed very similar when it came to what was on offer and the price, so we pretty much just picked one at random. Our only real requirement was that they take credit cards since we didn't have any local cash on us at the time. I don't recall the name of the restaurant was chose but it was open-air, had friendly staff, and was very fast! Less than 10 minutes after ordering our Pad Thai we had food on the table!

I went with the Pad Thai with chicken and I was impressed with the serving size I received. The price was 120 baht which is about $4. Not quite Bulgaria prices when it comes to eating out... but still a lot cheaper than any Pad Thai I've had in the States! And, of course, it was tastier, too. Now, some of that might have been the atmosphere and the sheer joy of actually eating Thai food in Thailand for the first time ever, but it was really just a good plate of food. 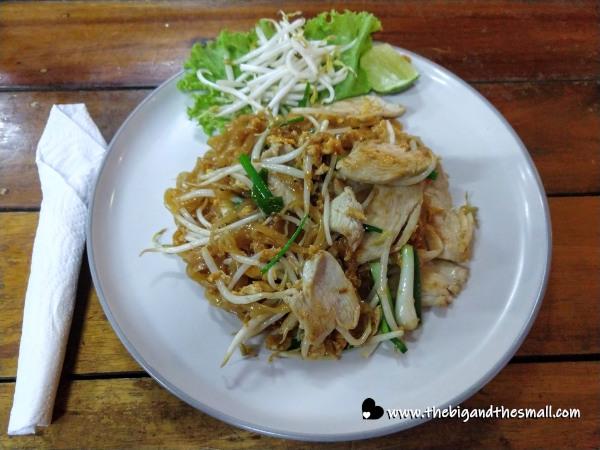 As much as I detest seafood, Joel loves it, so he went with the Pad Thai with seafood. His portion was a bit smaller, though it was the same price as mine. I didn't try any of his but he said it was great! 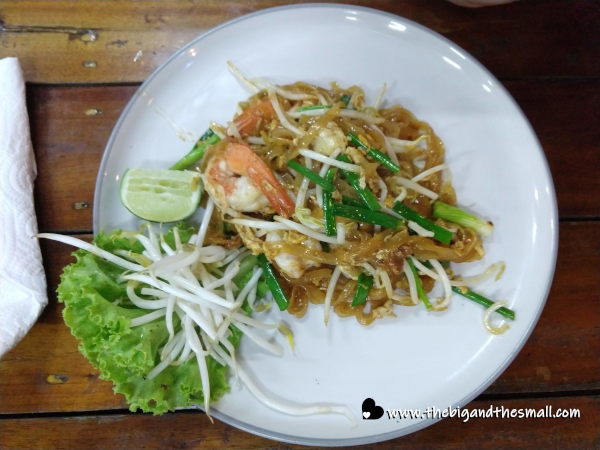 The next morning we had breakfast at our hotel (which I will rave about later), swam in the pool, then decided to go take a walk on the beach. The night before we had avoided the restaurants that were directly on the beach because we assumed that they would be more expensive. Boy were we wrong about that! As we walked along the water we noticed that all of the restaurants were serving Pad Thai for about 80-90 baht, as opposed to the 120 we paid the night before! Well, now we knew that dinner tonight would be literally on the beach.

Later that day we returned to the first restaurant on the beach from our hotel. The tables and chairs were literally just set up on the sand in front of the restaurant. It doesn't get any more casual, cool, beach vibe than this! 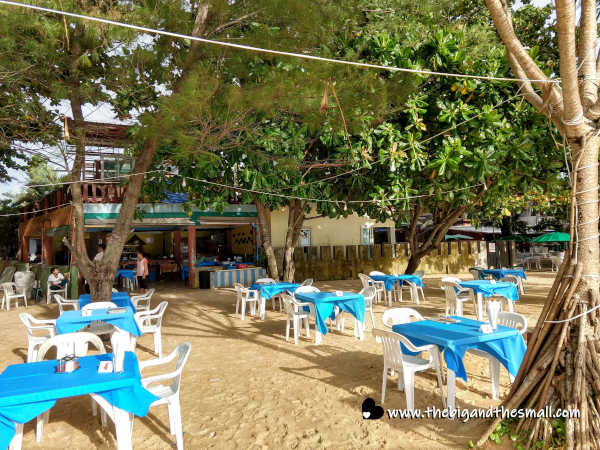 And who could get mad at this view when eating? Not me, that's for sure! 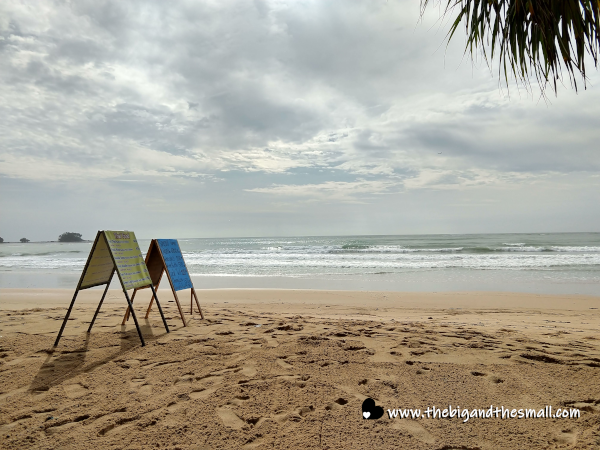 It turned out that we loved this restaurant so much, we ended up eating here the rest of our time in Thailand! I suppose for some people it might be a shame that we didn't try more places, but once we found a local place we loved, with a view and prices that couldn't be beat, we decided to support this one business and just try different menu options here. The first day I went with, of course, Pad Thai. I did get it with pork to mix it up a bit, and at this restaurant, they also put tofu in all of the options! We also liked that they gave us chopsticks which is how we are used to eating Pad Thai. 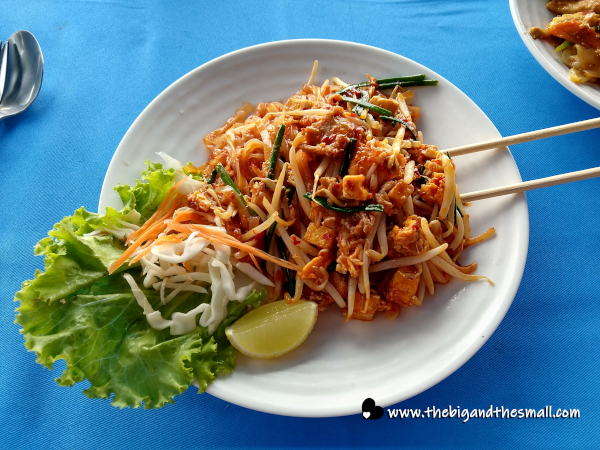 We decided that in addition to my daily Pad Thai, Joel would order something different and we would share so we could try something new as well. Our first choice was something called "Fried Noodle" on the menu. The noodles were like Pad Thai noodles but they were much wider cut (sort of like spaghetti vs. fettucine.) The sauce was different and it came with more vegetables like greens, carrots, and baby corn. It was delicious! 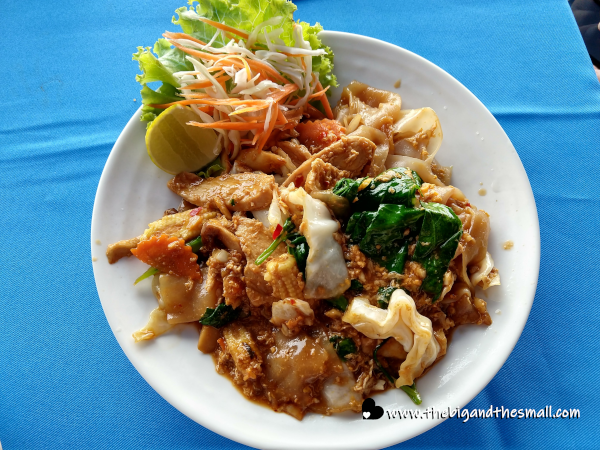 We were extra hungry that day so we actually order three entrees and the third one was the seafood fried rice. Joel said it was delicious and contained both crab and shrimp. I tried some of just the rice after he picked out all of the "good stuff" and it was pretty tasty. All three entrees were only 80 baht, or about $2.60 apiece. Even with the small surcharge for using a credit card our whole meal clocked in at less than $9! (Note: we were happy to pay the credit card surcharge as we don't like making a small business take that hit, and it was still way cheaper than the ATM fee we would have gotten charged had we taken out cash.) 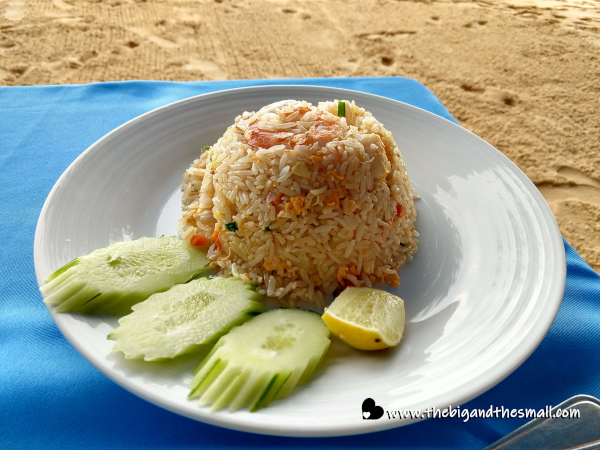 The next day we splurged a bit and tried a more pricey option on the menu - the green curry which clocked in at 120 baht (aka what we paid for Pad Thai the first night.) It wasn't exactly what we expected - I was expecting a rice-based dish and instead, we got more of a soup, but it was delicious! The spice level was perfect - hot enough to give you some burn but mostly had flavor, not just heat. 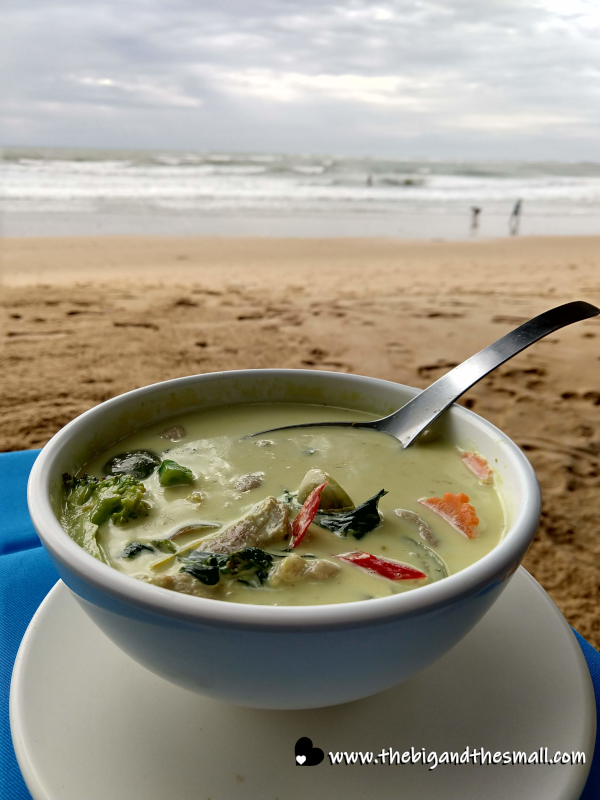 On our last day, we ended up both just getting our favorite - Pad Thai with chicken for me and with seafood for Joel. I know there are a hundred more dishes we could have (arguably should have?) tried but we just couldn't resist! The restaurant provided some sauces/enhancements on the table and we both had discovered our favorite combinations. I liked adding the lime they always included and plenty of this hot chili oil. (Also I super loved the tiny ladles!) 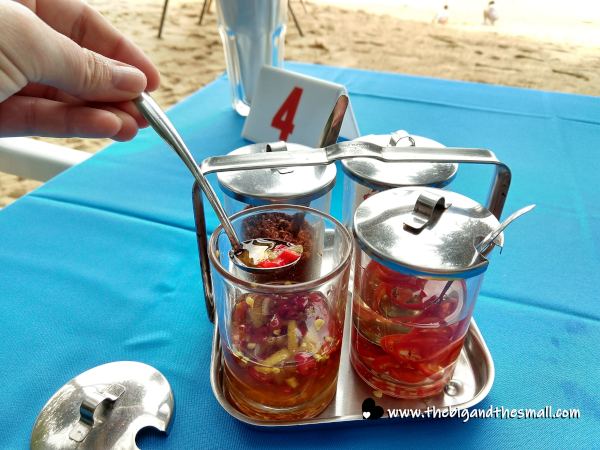 As I write this post we are now in Australia, and while we are less than a five-minute drive from the beach, there are no restaurants at our local beach. I am missing cheap, delicious, authentic Thai food something fierce! Someday I think I'll need to learn to make Pad Thai at home, so I can have something close when I get the craving.

I have been on the search for a great Pad Thai recipe so if you find one, let me know! I made the mistake of ordering Pad Thai from a Malaysian restaurant and it was not the right blend for my understanding/interp of Pad Thai and now I've been craving the good stuff. I commend you for living the dream and eating Pad Thai on the beach every day of your stay there.

I don't think I'll do any serious experimentation until I have my own kitchen again (I can't wait!) but I will definitely keep you posted if I find something good! I bet somewhere in Minneapolis you can find the good stuff!