I don't normally do a full post on the pet or pets we are caring for but in this case, our new pet is so cute I just couldn't resist! At least 90% of my photos so far in Bulgaria are just of this little guy - a few of which you've already seen if you follow us on Instagram. I really don't know what I'm going to do when we leave here at the end of the month, I'm going to miss him so much! 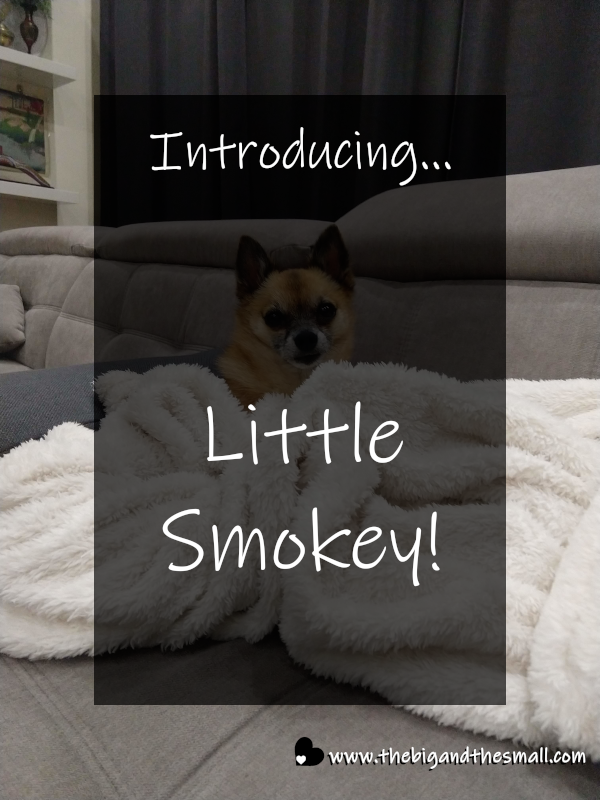 Smokey is a Pomeranian/Chihuahua mix Cassie adopted from a rescue in Hawaii 9 years ago. They think he was around 2 at the time making him the stately age of 11 years old, currently. You can tell he's getting a little older because of the gray around his face, but not because of his energy levels! He's a pretty spritely little dude. 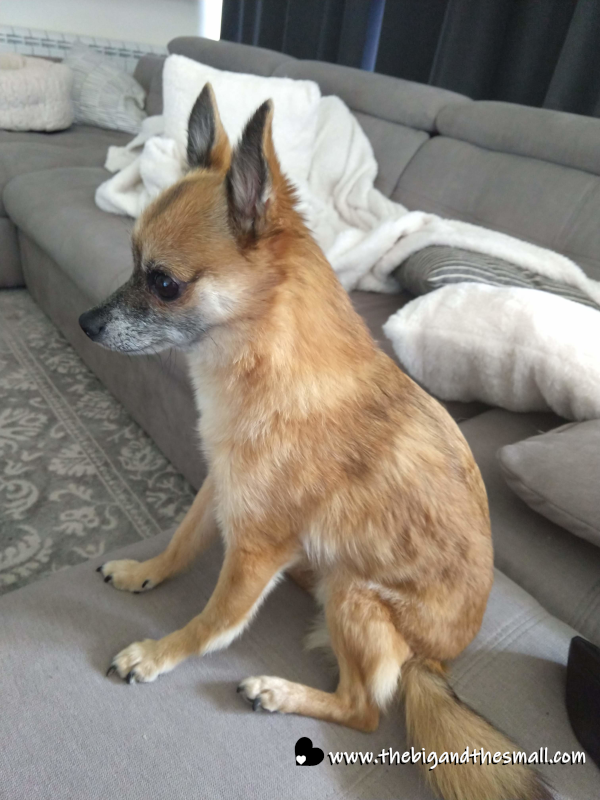 One of my favorite things about Smokey is how much he loves to cuddle and snuggle with us. He is never very far from us, he even follows me from room to room if I go around doing things. This morning he tried to hang out with me while I did some yoga - every time I held a pose he would snuggle into a spot, then when I had to move he got annoyed with me until he finally went back to Joel on the couch. It was super cute and if I hadn't been using my phone for the yoga video I would have tried to grab a picture. Instead, just imagine this snuggly little cutie all up in your business while trying to do downward dog and you'll get the idea. 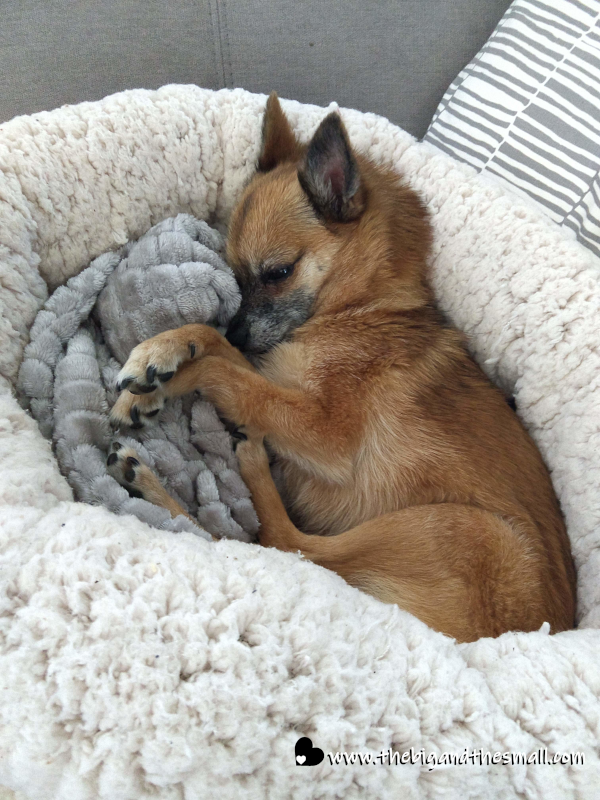 In a first for us with pets during our travels, Smokey also sleeps with us at night. Normally we wouldn't really like that sort of thing (pets shed, get in the way, etc.) but he is so tiny we barely notice him. He doesn't seem to care if I move around a lot at night, which I usually do, he just moves around a bit and resettles down. One morning I felt bad about moving him too much so I decided to go finish sleeping on the couch, but no sooner did I get settled in then I felt him hopping up on the couch and found him snuggling in the crook of my legs! 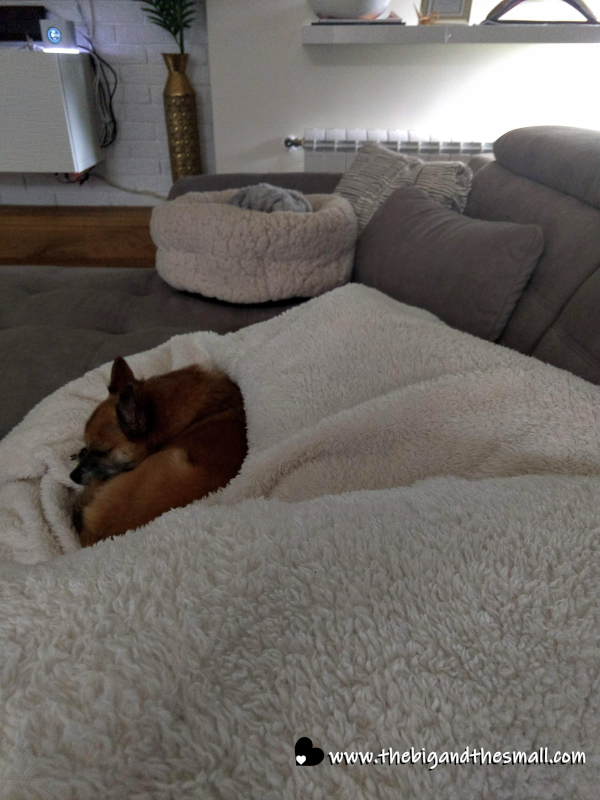 During the day he often naps in his own bed which sits at one end of the couch. That bed also contains his very own blanket which is even monogrammed with his name! I mean, how cute is that. One time I found him all snuggled up in the bed with the blanket wrapped around him so that he looked like a little puppy burrito. I mean, couldn't you just eat that up?! 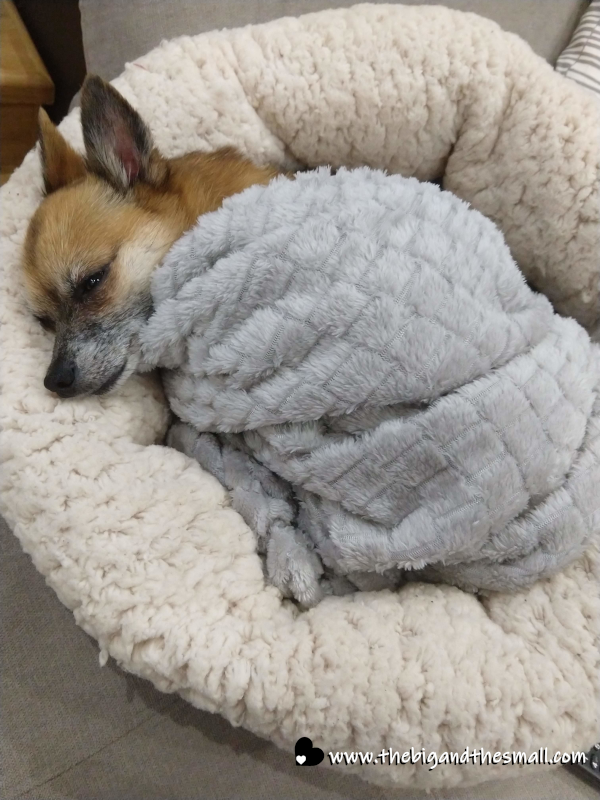 When I say he goes everywhere with us I do mean everywhere - even to the grocery store! He has his very own carrier/backpack which makes it easy to take him places. It's also perfect for taking him on longer walks/hikes with us - if he gets tired we just put him in his backpack and carry on! 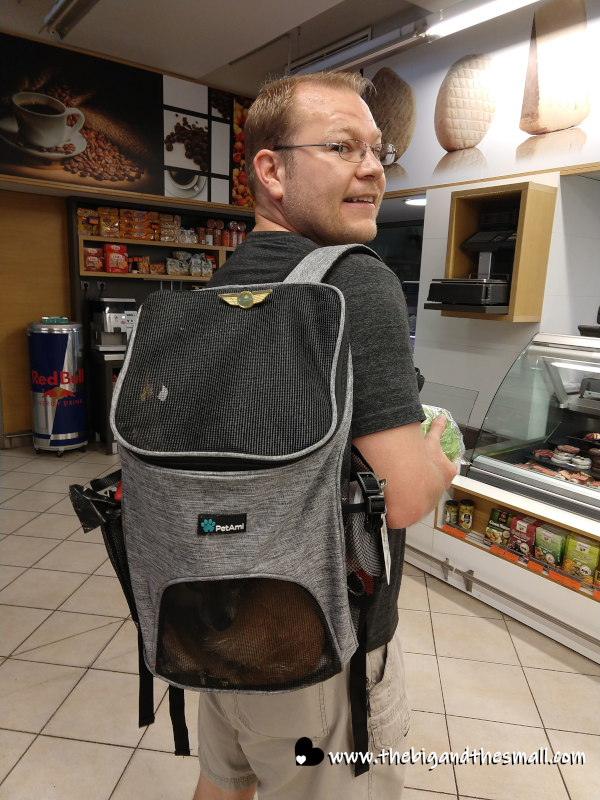 When at home, if he's not sleeping, eating or snuggling with us, he has a variety of toys he likes to play with. It is so fun to play fetch around the apartment and watch him get all ferocious with the chewies. His favorite seems to be a stuffed duck but here he is playing with a fox. 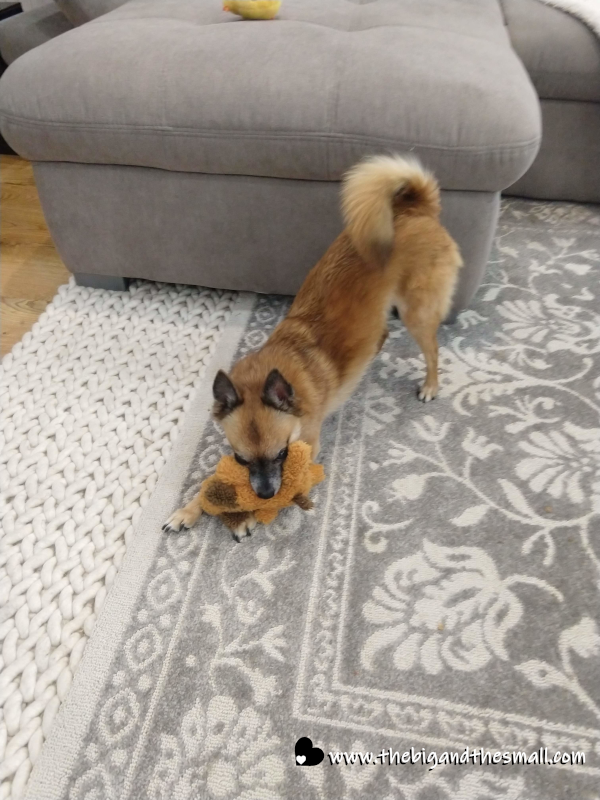 Even though Smokey is a small dog, most of whom are infamous for being rather, shall we say... yappy... he hardly ever barks. Which is definitely something we love about him! When he wants to go outside on the balcony he just starts bouncing around and making it very clear in his actions. When he's ready to go on a walk he does this hilarious thing where he starts sneezing at us! It's so cute.

He does have one interesting little quirk - he does not like it if Joel and I show each other some form of affection that he deems too, I don't know, potentially violent? He really does not like high fives, and if Joel tries to give me a back rub he will jump up on my back to defend me. These are the only times that he will bark in protest of what we are doing. It's so odd!

Smokey is overall just about the perfect pet - he is mostly quiet, incredibly adorable, easy to fit into our lives and routines, super snuggly, and fun! If he was a breed that didn't shed I would actually call him perfect. He travels so well I'm half tempted to sneak him into my luggage when we move on to Australia soon, but I'm pretty sure his owners would notice and be very sad. So I'll just have to enjoy his company while I've got him and take lots of pictures to look back on!