Sometimes we do things just for the blog, because we figure, hey, that might be a cool thing to write about! Other times we say to ourselves that we are doing something just for the blog, but in reality, we really want to do the thing anyway, the blog is just a decent excuse. This is one of those times. 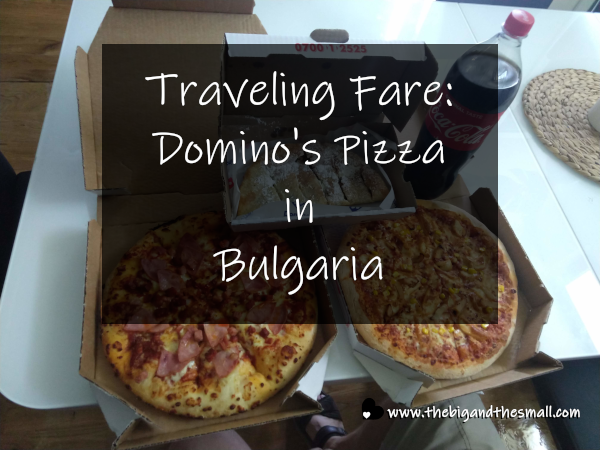 On one of our first days here, while we were walking to the grocery store, we saw a car drive by with a Domino's delivery sign on it. They have Domino's here?! we said to each other. Hmmm, maybe we'll have to try that sometime... After all, we did try Pizza Hut when we were in Wales so this could be us just continuing that trend. And ya know, we could write about it for the blog... Fast forward to last Friday when mid-afternoon hit, I was starving, I didn't feel like cooking, and neither of us were feeling any of the food we had in the house. I remembered the Domino's delivery car and so it was decided, we would figure out how to order some!

Now, as usual, Google is our friend. I quickly found the correct Domino's website, though it took a little longer to figure out which of the 15 or so locations we should order from. Who knew Domino's was so big in Bulgaria?! I had to comb through old texts from Cassie to find the address and then we had to do some Google map sleuthing. Thankfully the website let us choose to have it automatically translated into English or we would have been dead in the water before we even started. The auto-translation did lead to some pretty funny things though, like this screen to choose between getting our order via "Shipping" or "Taken Out of Place" - aka delivery or carryout. 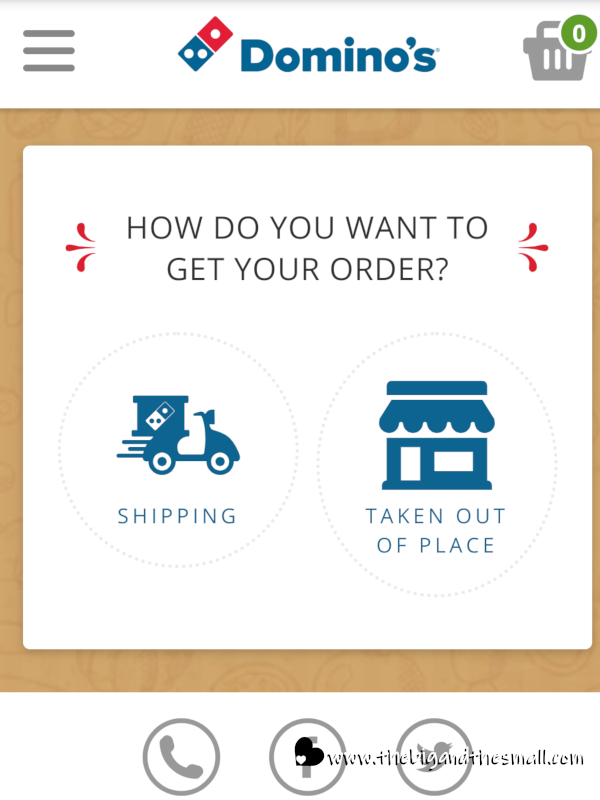 The most exciting bit was perusing the menu options and seeing what we could get on our pizza. Most of the options we pretty familiar pizza toppings, though with some funny names like "Beast V2" (a meat lovers style, the second version maybe?), "American Hot" (pepperoni and jalapenos), and "Extravaganza" (aka Supreme pizza but I must say I like the celebratory feel of extravaganza better.) They had a "fasting pizza" which appeared to be without cheese for anyone who is lactose intolerant.

The weirdest option was the "Tuna Pizza" which had tuna, onions, and fresh tomatoes. I must admit, we've actually seen this tuna pizza a lot in Europe - basically, any time I've seen frozen pizza there has been an option with tuna on it. I first remember seeing it way back in Germany and Joel wanted to try it but I refused. I don't care for fish or seafood for the most part, though I will, strangely, eat tuna noodle casserole. But I draw the line at pizza. Ya know that scene in Inside Out where Anger sees broccoli on pizza and goes "Congratulations San Francisco, you've ruined pizza!"? That's exactly how I feel about tuna on pizza. "Congratulations, Europe, you've ruined pizza!" (Ironically, I actually enjoy broccoli on pizza.)

In the end we went with "Meat Mania" - another meat lover's style and a fun name, and something called "Chick-Chi-Rick" which came with chicken and sweet corn! They had an awesome family deal that got you two large pizzas, a dessert, and a 2 liter of Coke for only 25.90 Bulgarian money. We figured 25.90 in American money would have been a pretty good deal, so this was a real treat! We tipped the driver bringing the total to 30 lev, which is only about $17! 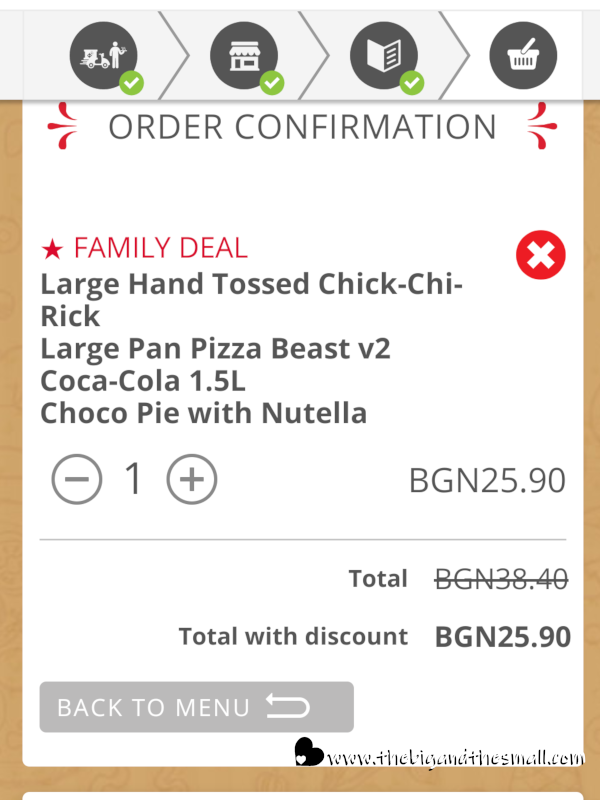 Of course now that we had our order figured out, we had to figure out how to pay. We really wanted to use our credit card because A. we get travel points and B. we don't have much Bulgarian cash on hand. We are only here for 5 weeks total, and we haven't actually gotten any of our own money out yet, but we did have a 50 that our hosts left us for "just in case." (Obviously we pay them back for any of that we use unless we had to use it on something for their house or their pet.) We tried really hard to figure out how to use our card but it just wasn't working. The problem was that the pay screen switched to Bulgarian and would not switch back to English so we had no idea what we were clicking. We were ordering on my phone, so we tried using Joel's phone to have Google Translate read the Bulgarian for us, but in the end we could not get it translated well enough for us to know what was going on. 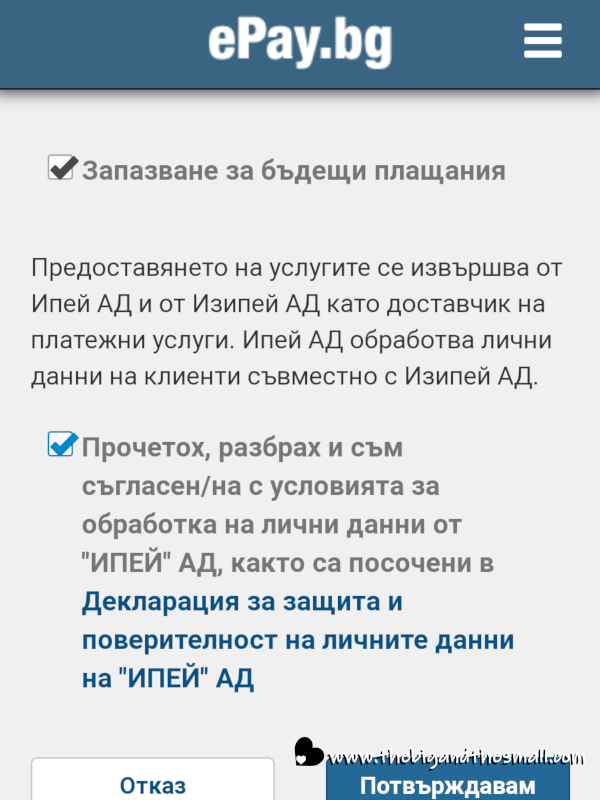 So we switched to cash and finally got the order placed! Phew! Then came the waiting and hoping that we had put the address in correctly and that they would find us. Since we are housesittig in a secure apartment building, we knew we would have to go outside to meet them. There isn't really a front door to this apartment since we actually have an elevator that opens up right into the foyer! Yes, like a fancy penthouse! You have to have a special electronic key to have the elevator go to our floor. I killed some time by taking the dog for a walk, then we stood outside waiting for our pizza to arrive.

There seemed to be a bit of confusion as we saw the pizza guy first go to the building next door to ours, but then we flagged him down, confirmed that it was our delivery and success was ours! We paid him cash, got our change, and headed back upstairs to enjoy the spoils of our victory. I tried to take a picture of Joel in our elevator and when I told him to look excited he apparently took that to mean look slightly deranged. 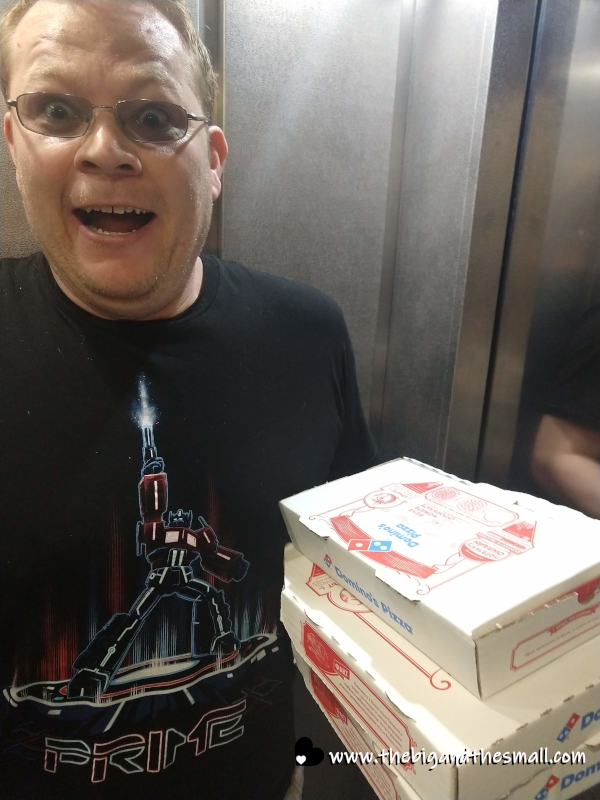 We spread it all out on the table to take a picture first, then moved to the couch to settle in for pizza and a movie! Truly, one of my favorite activities, no matter what country I'm in. I am happy to report that the Domino's pizza was pretty decent. I'd say my expectations aren't high even for Domino's back home, and it lived up to those. The larges did seem to be more the size of mediums to me (I think that's my American expectations of oversized food at play, everything always seems smaller here) and they could have used more cheese, but the toppings were great. We each preferred one pizza over the other so we got to eat most of our favorite after trying both (I liked the meat, Joel liked the one with corn.) 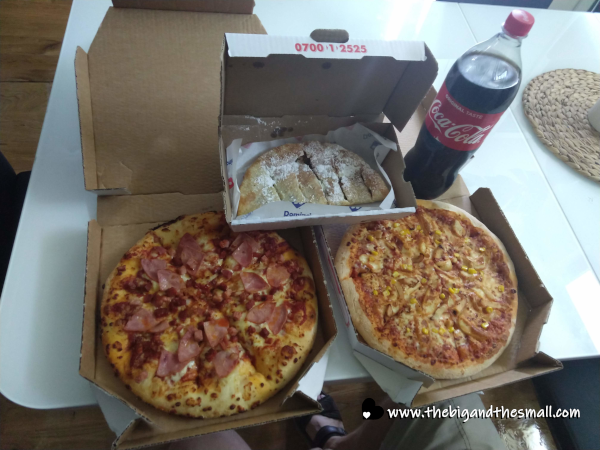 The dessert was really great - it was basically just a pastry crust with Nutella inside and powdered sugar on top - but yum! We ate half of all this for lunch, then the other half for dinner, so we got two meals out of all of it, making it an even better deal! I suggested we make ordering pizza a Friday tradition oh and hey... it's Friday again... hmmm! Of course, this would certainly be easier if we could use the credit card as we no longer have enough cash on hand for an order, dang it.

So there you have it. Domino's pizza in Bulgaria - not too hard to order if you have cash on hand, decent pizza, and definitely a great deal price-wise. This is one of those things I love about traveling via housesitting - we get to try something like this since we actually live here for a while, rather than just passing through quickly as a tourist.

We do have more touristy things coming up on our agenda for the next couple weeks. It's time to get out of our great apartment bubble and really go see the area!