Yesterday we went full American (or, as American as we can over here) for breakfast and had biscuits and gravy. Then Steve decided that for the rest of the day we needed to go full British! Turns out that means eating a ton of carbs. 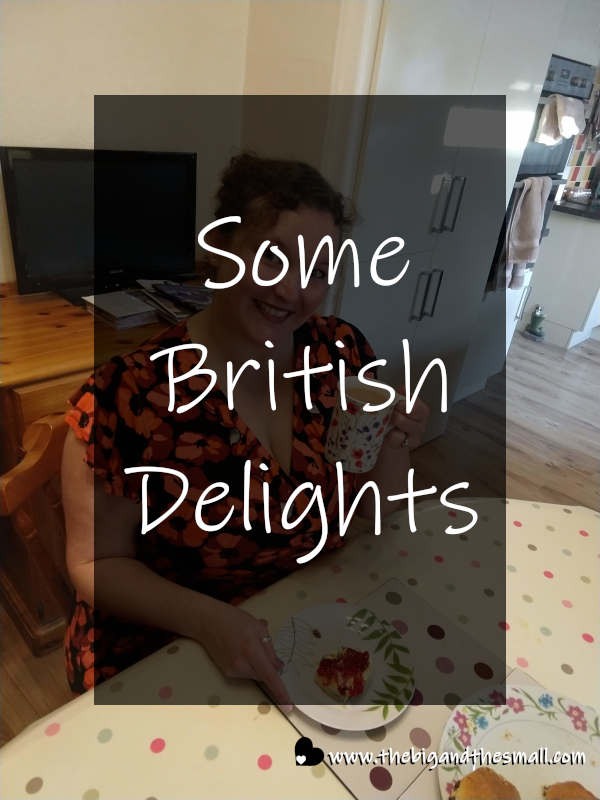 In the early afternoon yesterday I was gone for several hours at a church event. The ladies group at the local Methodist Church had asked me to come to speak to them at their weekly meeting. I had a very enjoyable time chatting and having tea, but this meant that the guys were on their own...which can be dangerous! They went to the grocery store without me and went a bit crazy.

While I was gone Steve created a snack called a "Chip Butty" for them to enjoy. When I first got home I was annoyed they had eaten something potentially delicious without me, but then they described it and I decided I was okay with missing out on this one. A Chip Butty is a bread roll filled with chips (what American know as french fries), then covered in melted cheese and smothered in gravy. I mean, it kinda sounds good, maybe? But I think I'd just rather have the fries with cheese and gravy, and skip the bread roll. I mentioned that this sounded like something people might eat when they are drunk, and Steve confirmed it is often a treat indulged in after a night out. The guys didn't bother to take any pictures of this lovely creation so you'll just have to use your imagination.

What I did get to partake in when I got home was a "cream tea." This is apparently a "west country" treat - having scones with clotted cream and jam with your afternoon tea. The table was set with some scones (these ones had sultanas in them, aka raisins), the clotted cream, and strawberry jam. 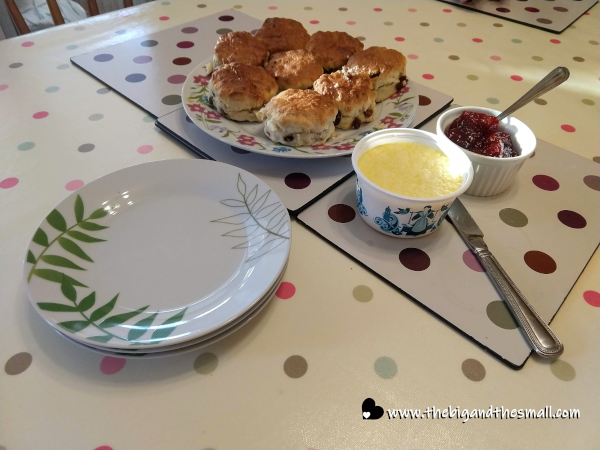 Steve informed us that there is a right way and a wrong way to put the cream and jam on your scone. In Cornwall (where we spent Christmas), they put the jam on first, then the cream - which is the wrong way apparently. Steve told us in no uncertain terms that we were to put on the clotted cream and then the jam. We followed orders. 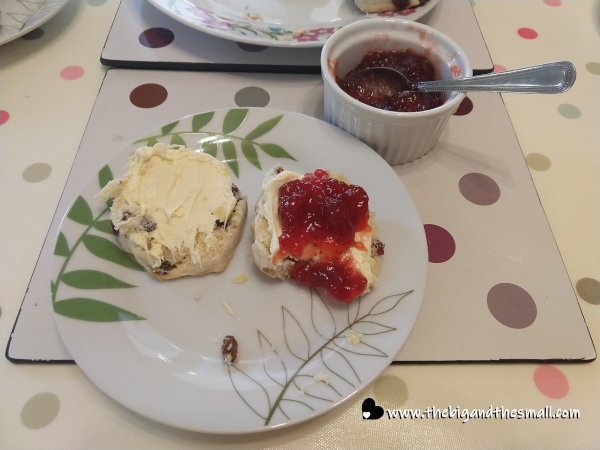 The clotted cream itself is quite interesting. Steve asked us what the equivalent would be in the US and I can honestly say that I don't think there is one. If I'm wrong about that let me know. The cream looked like butter and had the consistency of perfectly softened butter, yet that was while it was still chilled. It did have a sort of crust on top (which Steve said is his favorite part) that gave it an interesting texture. The taste was kind of like butter but with less flavor. It's really hard to describe! I will say that paired with the strawberry jam, it was delicious. 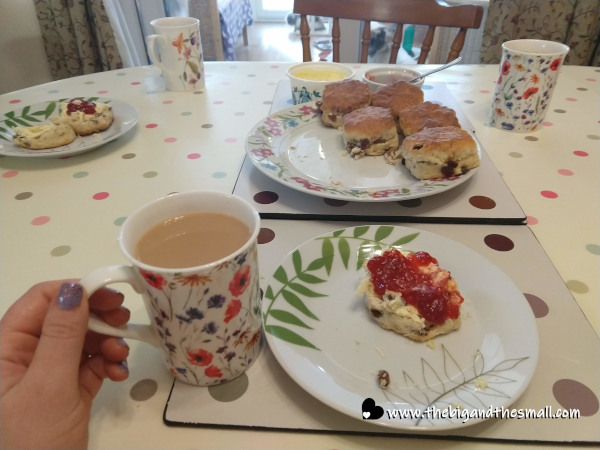 Being in the UK has yet to convert me to being a tea drinker, but I did decide to have one at this time so as to properly enjoy my cream tea. Steve was disappointed that he couldn't do it quite properly because we couldn't find a teapot (besides a super fancy one in the china cabinet we didn't dare touch). So we had to settle for tea that had brewed in our mugs rather than a teapot, and then Steve always adds milk and one sugar. I have to say, I enjoyed it more than I have enjoyed tea when I tried it in the past. I think the scones helped. 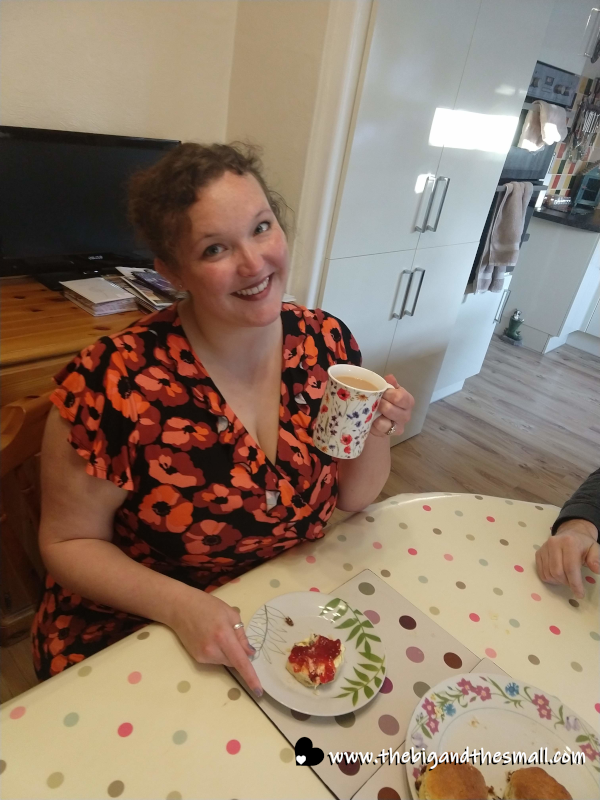 We indulged in this carb-heavy snack around 4:30, so we ended up having a later dinner than usual. I had told the guys not to buy anything for dinner because we had plenty of food at home, but Steve had a craving he just couldn't skip so we ended up with Lasagna and Chips! He has told me before that this is a thing - apparently, lasagna is almost always served with chips here, but I didn't quite believe him. It just seems like an overload of carbs, I don't get it! Nevertheless, that's what was for dinner. 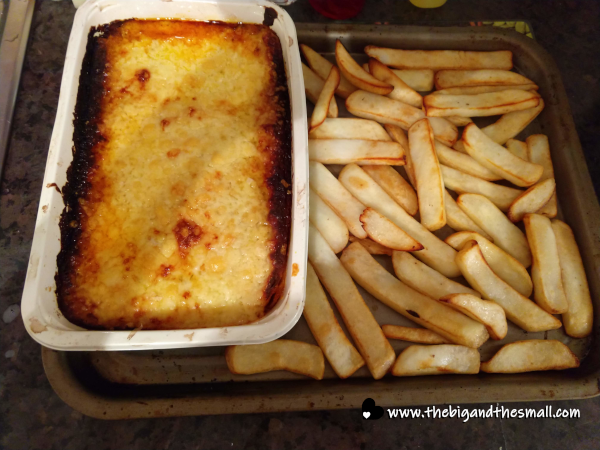 I was in the midst of a fairly emotional evening (fellow UMC people will know what I mean) so indulging in an overabundance of carbs was just what I needed. Turns out that Steve was right, lasagna with chips is quite delicious! You kind of take any extra sauce from the lasagna and use it as a sauce for the chips. Any extra crispy chips on your plate add an extra layer of texture to the lasagna if you eat them together. It sounds weird, I know, but don't knock it till you try it! 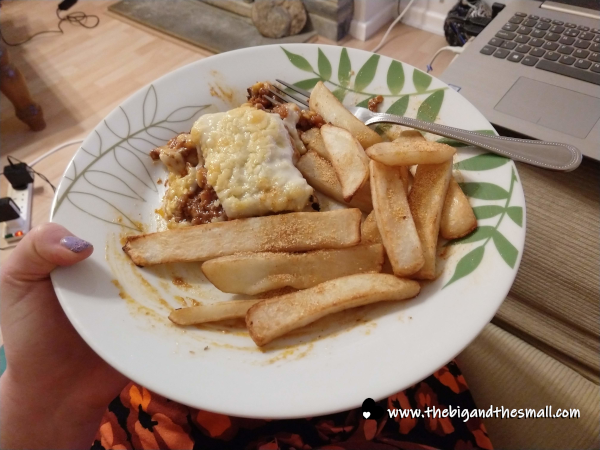 I can't say I'll be hankering after chips and lasagna again any time soon (I am trying to lose weight, after all) but I am glad I gave it a shot. It was better than I expected. And I suppose it's not that much weirder than having garlic bread with lasagna, which is also double carbing.

So what do you think? Which of these British delights do you most want to try? Which do you think you would enjoy the most? Do you think we should have eaten some vegetables to offset all these carbs? Yeah, me too.

I did not know that lasagna and chips were a thing! How fun. I'll have to try it sometime.

I had no idea either and was surprised at how much I liked it. I recommend eating it when going through emotional turmoil like watching GC, lol.