One of our favorite parts of hanging out with Steve (our English friend we met while we were in Wales) is exploring the difference between American and British culture, language, food, etc. So many things are so similar, and yet there is a lot that is quite different, too! A while back we had fun looking at language differences, and today we want to explore a difference when it comes to food. 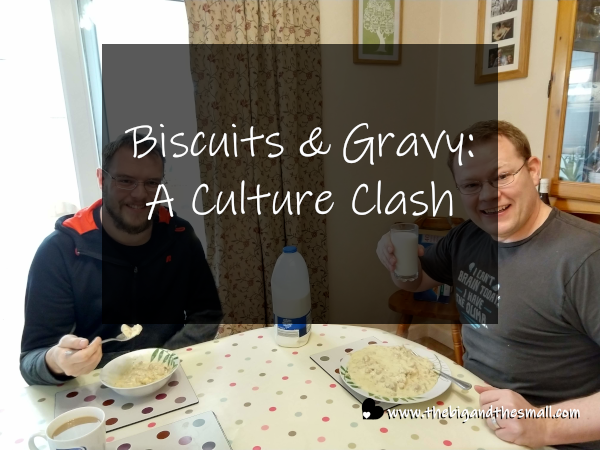 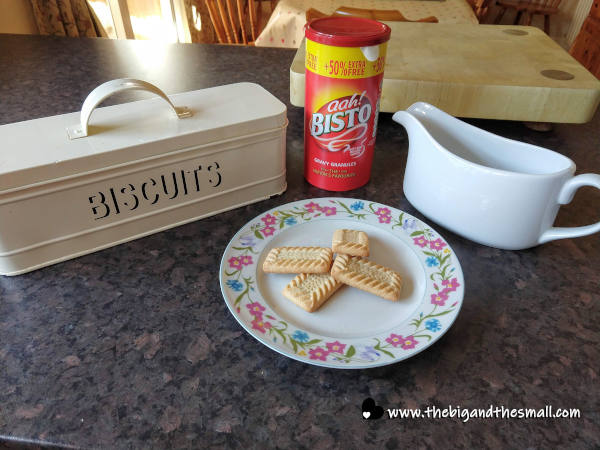 As a joke, we decided to try biscuits and gravy the literal British way. I plated some cookies, whipped up some gravy (you mix boiling water from the electric tea kettle with the gravy granules for a nearly instant gravy), and poured the gravy over the biscuits. Looks really appetizing, doesn't it? 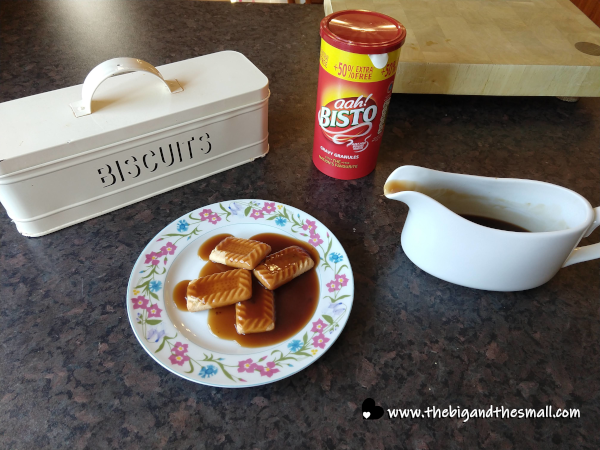 The joke was supposed to end there, but Joel (never one to let food go to waste) decided to actually try eating it. "How bad can it be?" I think the following picture shows the exact moment he realized how bad it can be... His final verdict - "Not. Good." He took one bite and then let me throw the rest in the trash. 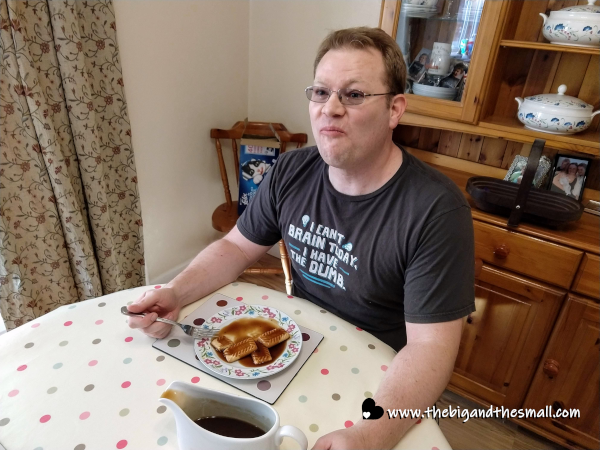 I probably could have gotten closer, but I am a pretty lazy cook. When I make B&G at home I use Pillsbury's biscuits and only make the gravy from scratch. I know I could have made real biscuits here (all the ingredients are easily available) but I was feeling lazy so I decided to see how close these plain butter scones were to biscuits (spoiler alert: not very). I also couldn't find regular ground breakfast sausage, so we got sausage links as the closest approximation. 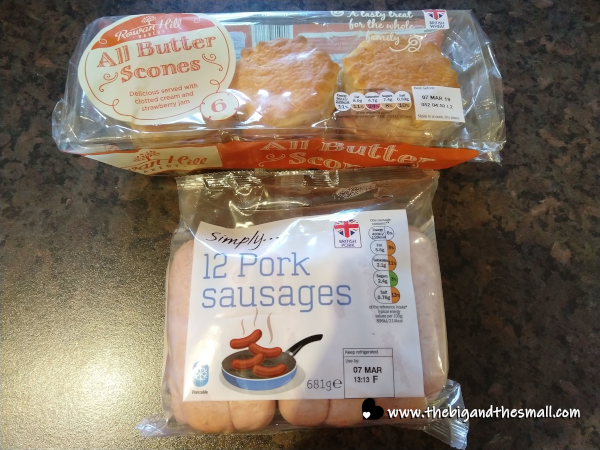 I roped Joel into being my sous-chef when he suggested removing the sausage links from their casings before using them in the gravy. That sounded like a lot of work I didn't want to do so I put him on the case! 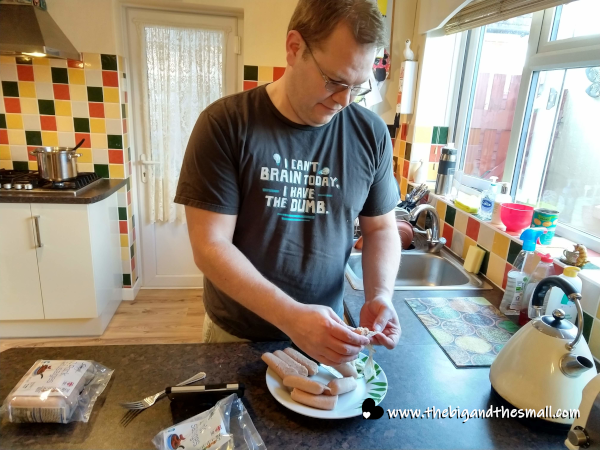 Then I browned and chopped up the sausage in a pan before starting the gravy separately. I don't follow a recipe when I make gravy because I've been making it for so long, so I just kind of eyeball the amounts of things as I go along. I make a roux with butter/flour, add milk and gradually thicken it, then season to my liking and add in the sausage. 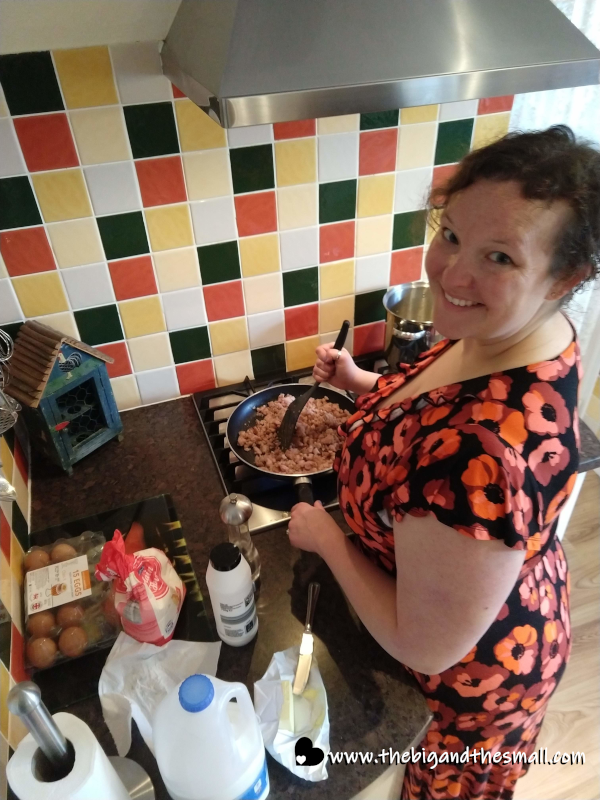 To try and fix up the scones a bit we cut them in half, added butter, and toasted them in the oven. By the time was all said and done we had a breakfast that at least looked like a good version of American biscuits and gravy! 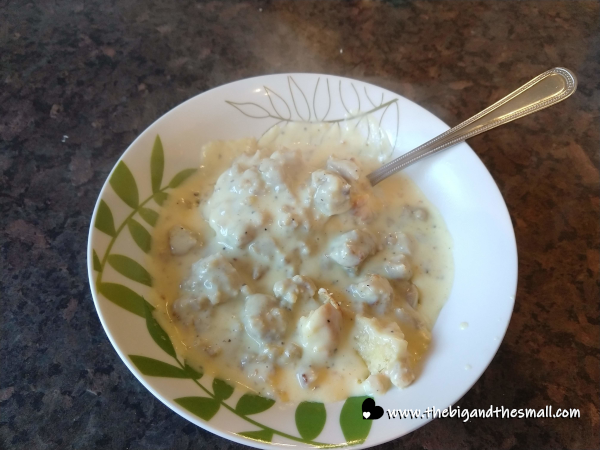 Turns out, however, that the scones were just a bit too sweet, which added just a bit too odd of a flavor when mixed with the sausage gravy. It wasn't necessarily bad...it just wasn't very good either. Let's just say I wouldn't make it this way again, and I have promised Steve that at some point in the future I'll make this meal again and put in the effort to make real biscuits. Steve did say it was better than the motel biscuits and gravy he's had in the past, which really, isn't saying much. But at least it wasn't worse! 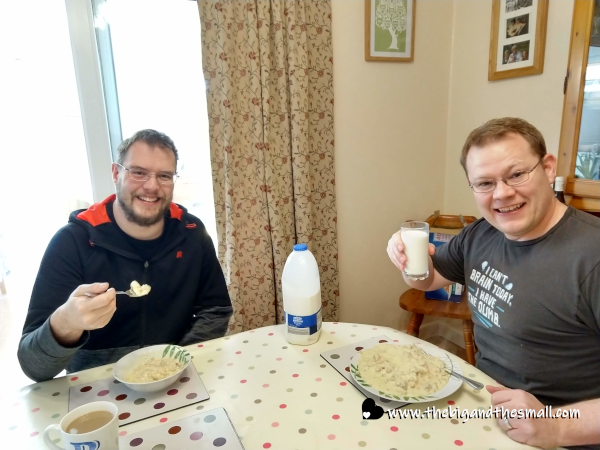 Since I Americanized our morning food, Steve set out to make the rest of the day extremely British. We are planning to have "cream tea" at some point and apparently dinner is going to be the very common mix of lasgana...and chips? Aka French fries? I'll have to keep you posted on what goes down over here.

How do you feel about biscuits and gravy? Love it or hate it or never tried it? Just how crazy do you think Joel is for trying cookies with brown gravy? Sound out below!