When air fryers first came out I jumped on the bandwagon and bought one. But like many new kitchen gadgets, I used it a few times and then forgot about it. But, lately we have been finding new ways to use it other than heating up frozen food.

I’ve noticed a lot of recipes now include air fryer instructions. And since we love eating breakfast for dinner, this one looked easy enough for even Dad to give a try. (In case you haven’t noticed, he’s not much into cooking in the kitchen.)

Monday in the kitchen with Dad & Matthew: Air Fryer Biscuit Bombs…biscuits stuffed with scrambled eggs, bacon & cheese then cooked in the air fryer and served with blueberries. 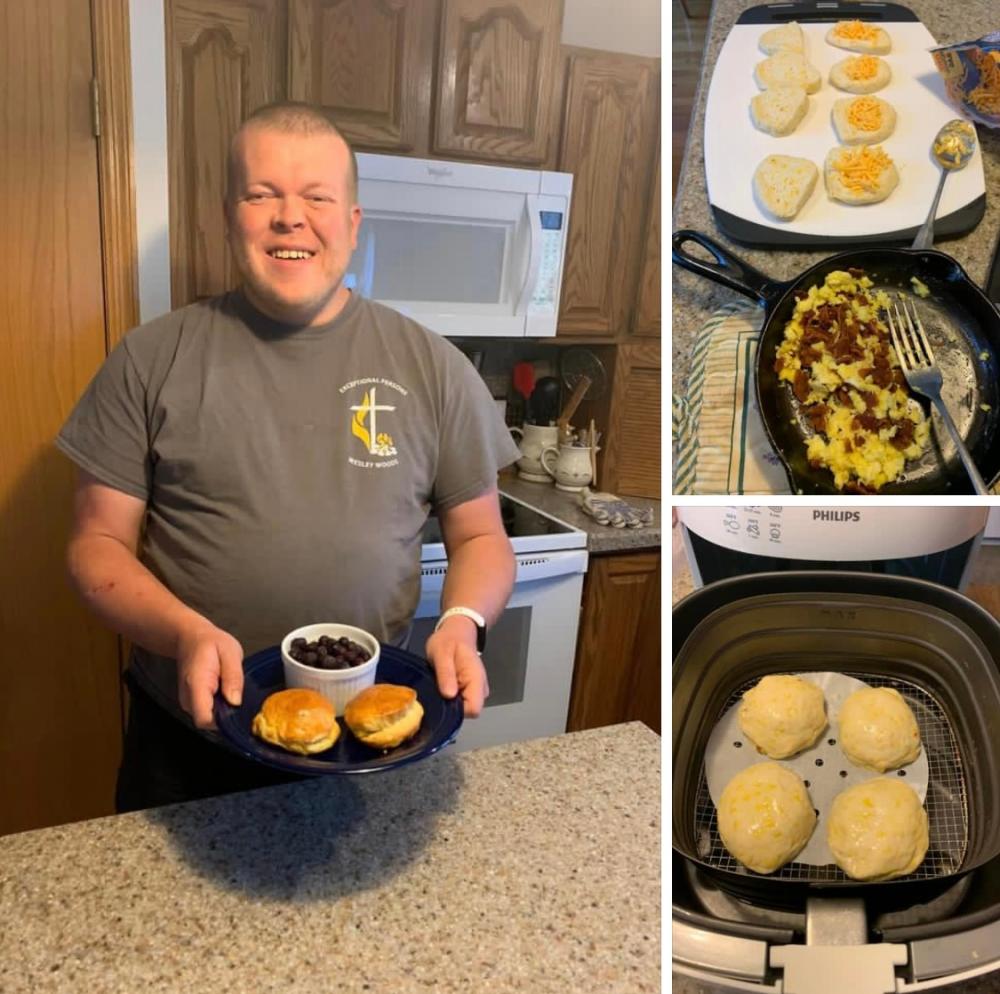 We love salmon, so when I ran across instructions for cooking frozen salmon in the air fryer I had to put it on the menu. The salmon comes out perfect. And with using up some of Matthew’s abundance of sauces (see the post from a few weeks ago), even he liked the salmon. 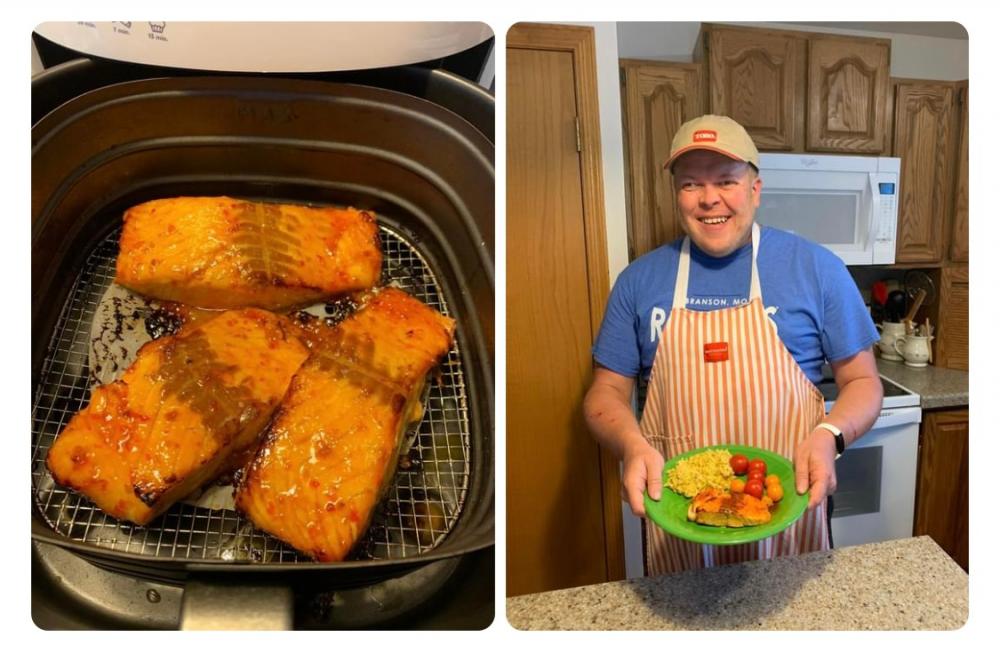 Matthew has now decided he wants an air-fryer at home. He offered to buy me a double basket air fryer in exchange for letting him have my single one. I have been reluctant to add a bigger gadget to my counter top, but I finally agreed.

He will be taking his air fryer home just in time to use it while we are on vacation. We will be gone for 23 days, so I have been helping him with some meal planning. (He will have some Supported Community Living staff during that time.) We did some batch cooking, so he now has sixteen breakfast burritos in the freezer waiting to be cooked in the air fryer. 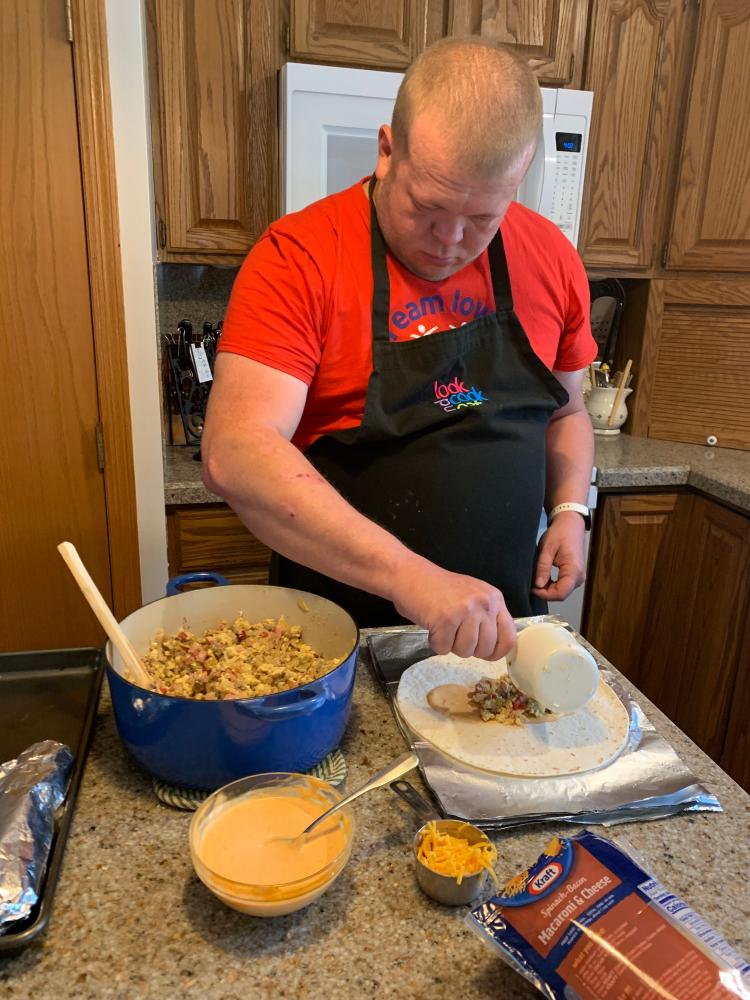 Thursday in the Kitchen with Matthew: We had enough filling left over to make Breakfast Burritos for dinner served with lettuce, guacamole, sour cream and salsa. 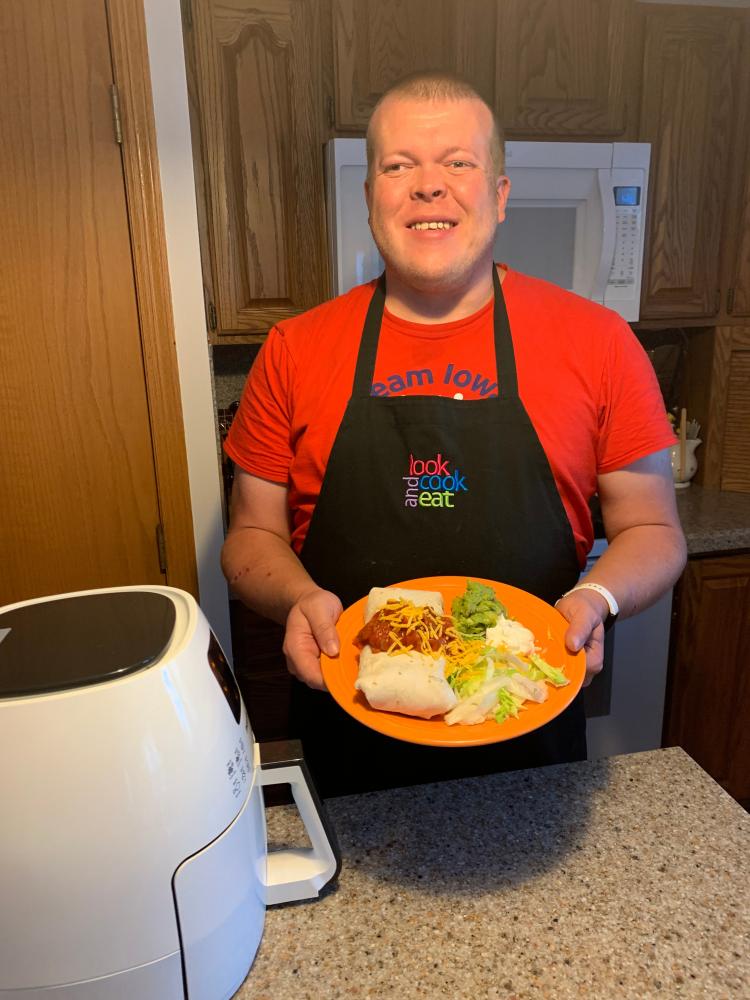 After reading about pizza on the grill, I’ve been wanting to give it a try on our Weber gas grill. There are three different techniques to do it: direct heat, a grill specific pizza pan (which I’ve had for years, but never used) and a pizza stone. We divided the homemade pan crust dough into thirds and tried all three.

The pizza stone had to heat for thirty minutes, so it was the first on the grill. Next up was the pan designed specifically for grilling. And finally, cooking the dough on the direct heat. We sprayed the grill and hesitantly put the dough on the grate. I was afraid it would be a mess. But, in just a few minutes it had perfect grill marks on the bottom. We then took it off the grill, added the toppings to the cooked side and put it back on to finish cooking.

With all three the crusts were amazingly crisp. The only downside is that the cheese didn’t get all melted and bubbly. So I cheated and popped them under the broiler for a few minutes. If I were to grill pizzas again, I would only do the direct heat technique. And, I would make smaller individual size pizzas and let everyone top their own.

Friday Pieday: Three ways of grilling pizza on the Weber gas grill… Basil from the garden & fresh mozzarella on a pizza stone. 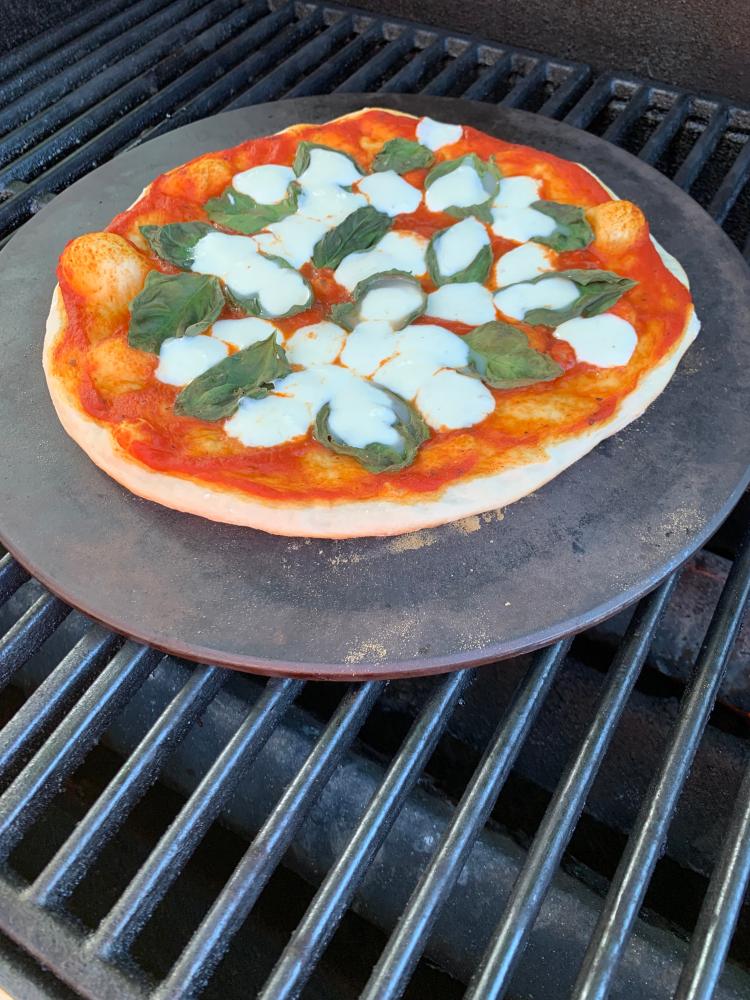 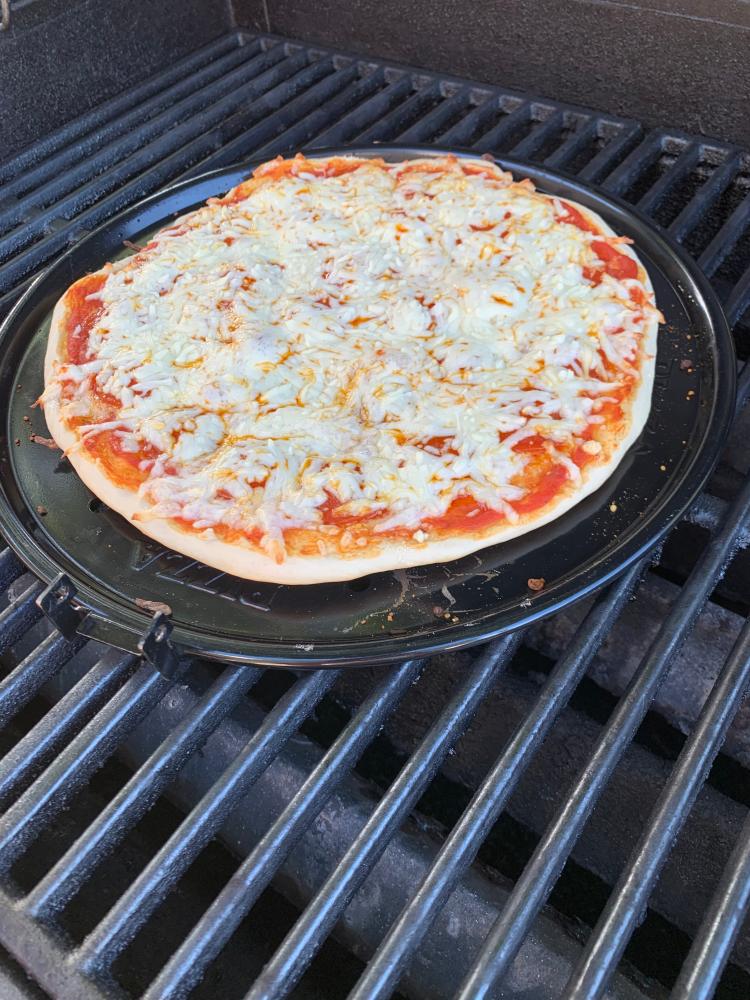 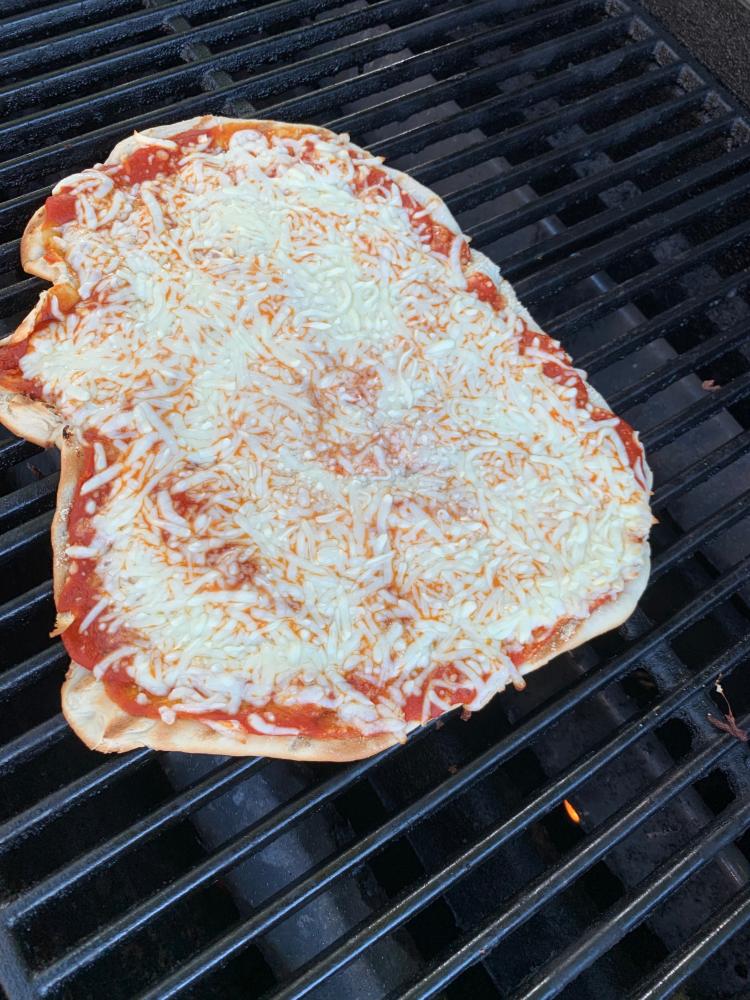 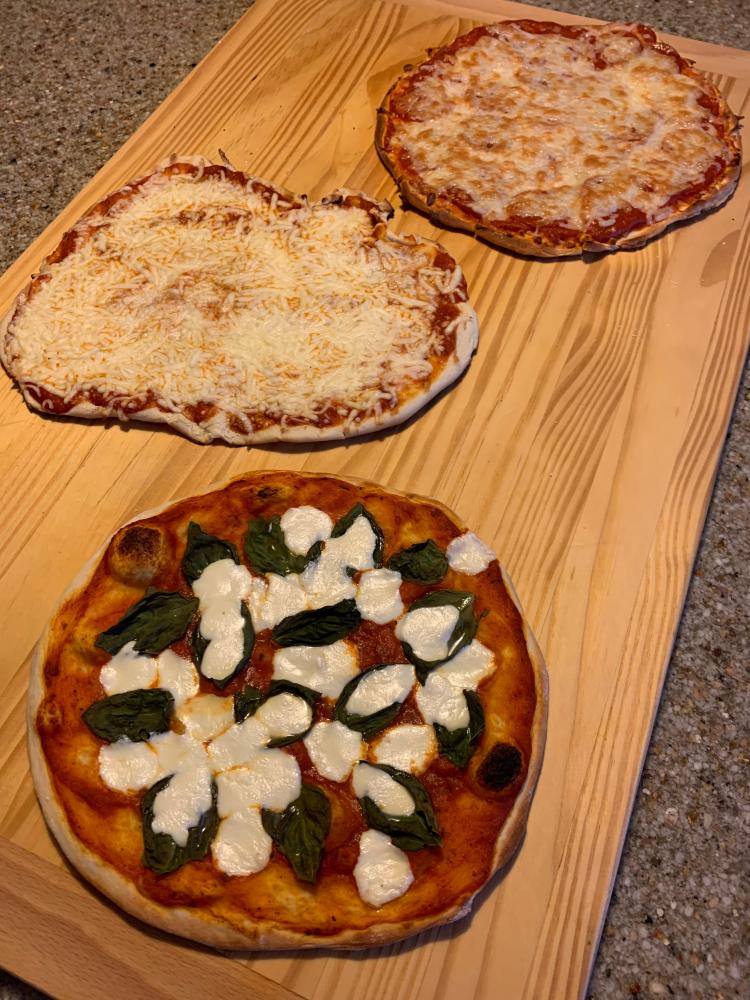 Recently, I saw a post on Facebook from Southern Cast Iron Cooking for individual breakfast pizzas that I had to give a try. (And I have the perfect six-inch pans with wooden chargers.) They were delicious… 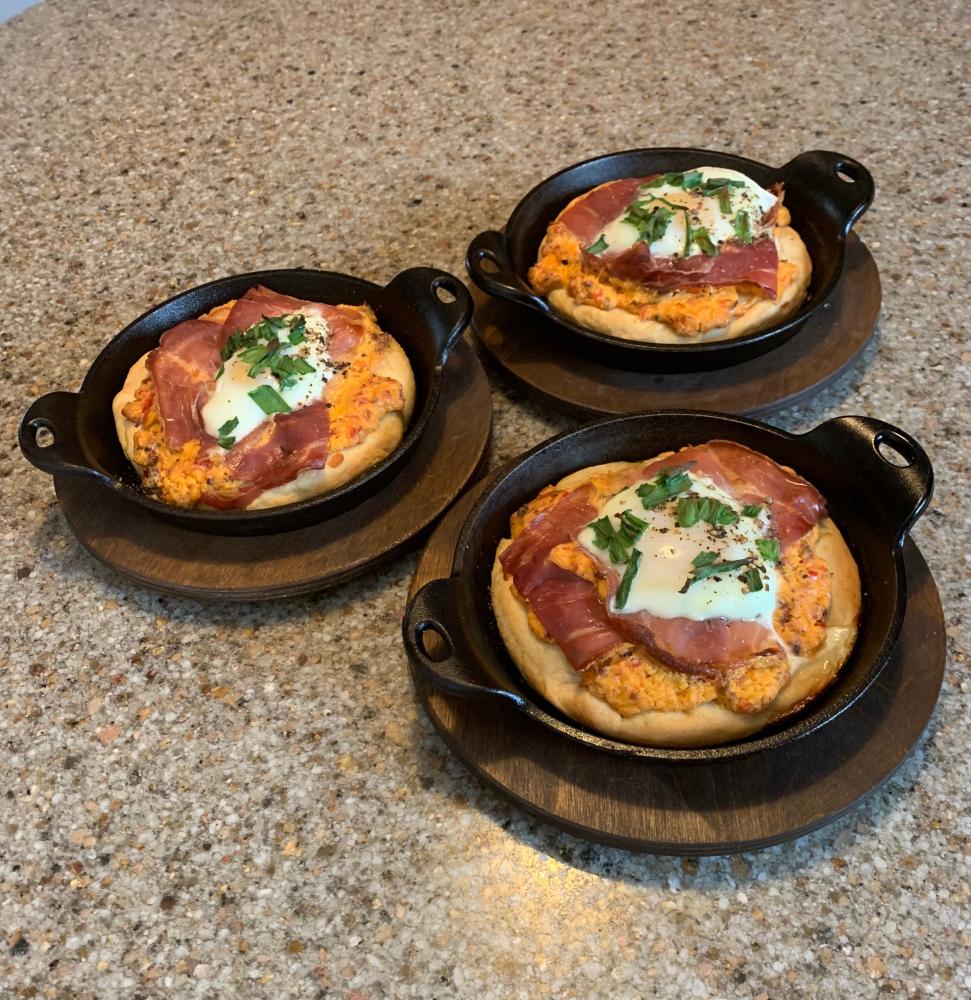