You know how I know we are officially back in Wales? We've been to a castle already! Wales has more castles per square mile than any other country in the world, and that is just one of the things I love about this place. After a good night's sleep at Rachel's manse, we set off the next day to explore the local castle. 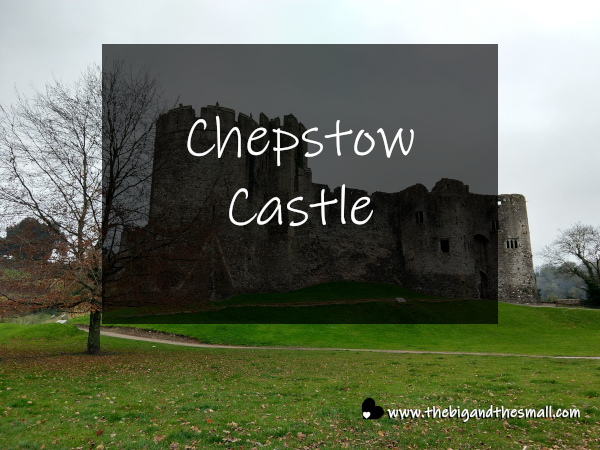 We started with a stroll through town with an eye to finding somewhere for lunch. Our first several choices were closed for various reasons, so we finally settled on a cozy little out of the way pub that Rachel had never been to before. Our random choice turned out to be a good one as, while the service was a bit slow, the food was incredible. We started with a cheese plate because Joel and I have missed British cheese (particularly cheddar) desperately and we needed some, stat. Then I went with a chicken and leek pie that came with mashed potatoes and gravy, Joel got lasagna, and Rachel had a jacket potato with brie and bacon. We ended by sharing an exquisite slice of chocolate orange cake. Between the food and the conversation, I was having such a good time I didn't take a single picture of our meal!

Once we were stuffed full we continued our stroll to the castle. (Side note: I long for the day when I can just walk from my own home to the local castle.) For most of our walk through town, we couldn't see the castle on the horizon (or perhaps I just wasn't paying attention) because all of a sudden we took a left turn and there it was! Chepstow Castle! Rachel and I had Joel take a picture of us out front, for posterity. 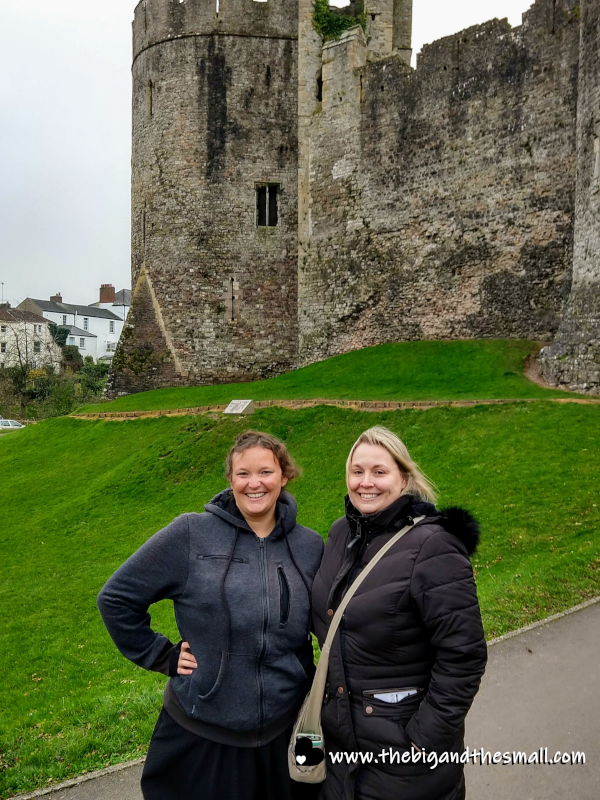 Joel decided to forgo actually going inside the castle, instead, he chose to wander around the trails and forest around the castle. I'm pretty sure he enjoyed himself just as much as Rachel and I did wandering around inside the castle! From the entrance/gift shop, we entered into a large green space surrounded by castle walls. There was a school group visiting that day and a historical re-enactor who was doing a demonstration for them. As we walked out he actually turned and pointed a crossbow at us! It was quite funny. 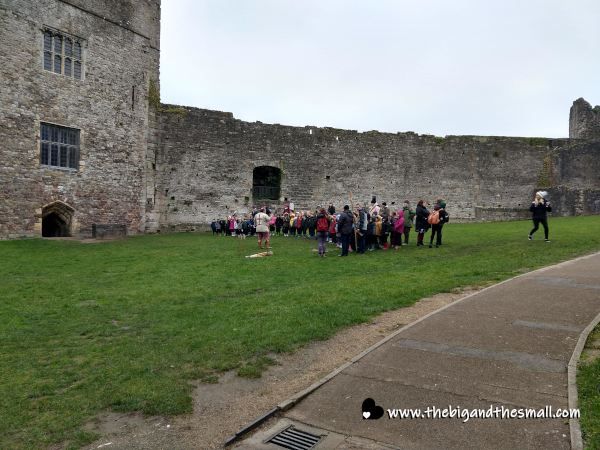 One of the first things that struck me about the castle was not the castle itself, but the view from the castle. Even on a gray, gloomy day, the view was quite stunning. It was at this point that Rachel informed that the land on the other side of the river was actually England! She had mentioned in one of our previous conversations that Chepstow was a border town between Wales and England, but I didn't quite realize how close the border actually was. This view is of the River Wye, which is actually a quite fascinating river - 99% of all the Earth's rivers flow in only one direction. The River Wye flows in two directions - south sometimes, and north others! The river changes its direction of flow 4 times in every 24 hours. Isn't that crazy?! I have never heard of a river like that before! 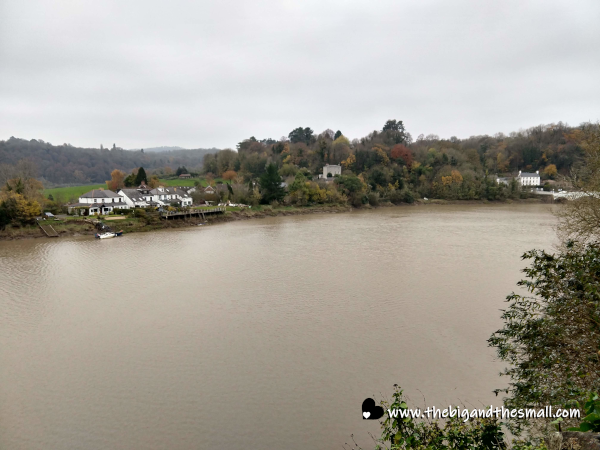 Our vantage point of the river also gave us a pretty cool view of the castle. Chepstow castle is large, consisting of many interconnected buildings. Turning to my left showed us just how much more castle we had to explore! 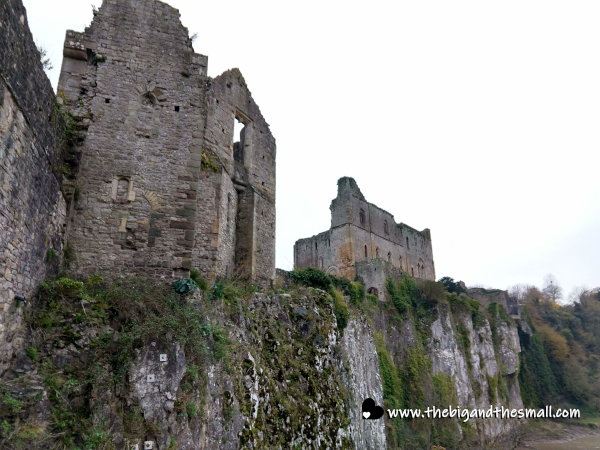 At one point as we wandered through the castle we came across the original castle doors. These hung at the main castle gateway until 1962 when they were copied and replaced with the replicas that are there now. They recently tested the age of the original doors (using dendrochronology - tree-ring dating) and discovered that they were made no later than the 1190s. This surprisingly early date makes these the oldest castle doors in Europe and prompted a review of Chepstow Castle's entire history. 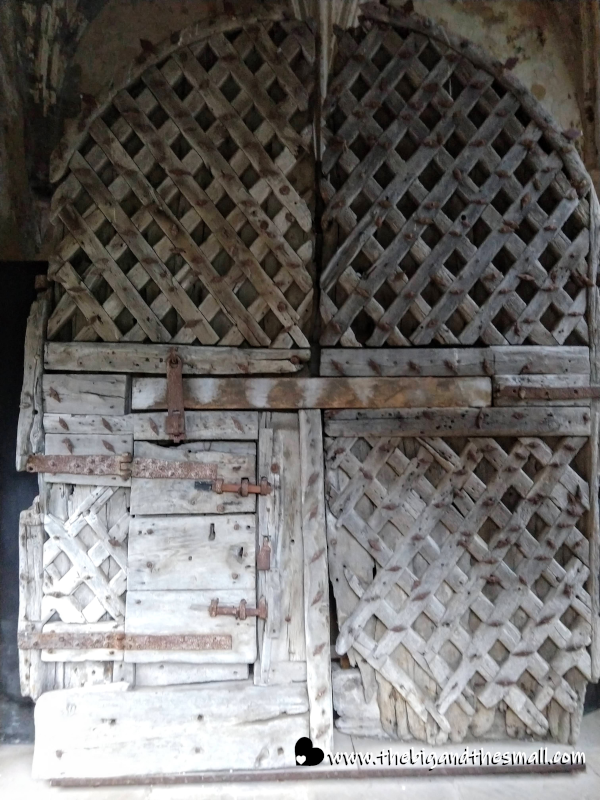 My favorite room in the whole castle was the great hall. Here is the information from the plaque at the castle: "This once grand hall was built c.1280 by Roger Bigod for entertaining and ceremonial purposes. Finely carved windows and painted plasterwork enriched its interior and its floor was paved with decorated tiles. Here, at the high end, the lord and his guests sat at a table on a dais overlooking the rest of the household. At the lower end were three elegant service doorways and the hall's main entrance (right) reached through an elaborate porch from the courtyard. The blocked upper door led to Bigod's private chamber." 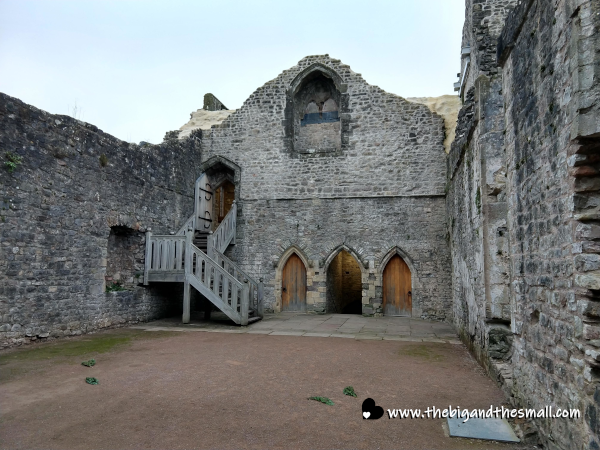 Near the end of the castle, there were several ways we could climb up to the top. The stairways were circular, steep, and dark, but we braved them anyway. Very, very carefully, as one of the things we discovered we have in common is that Rachel and I can both be klutzes. We survived our journeys both up and down the steps, and the view from the top was quite worth it. Looking one way we could oversee the town of Chepstow, and the other way gave us an aerial view of the castle. 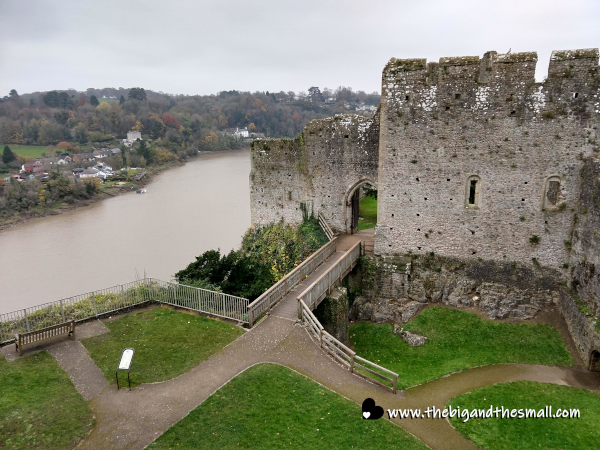 At one point when we were near the top, we heard someone shouting at us, and it turned out to be Joel! Apparently we were quite loud and he could hear us talking as we wandered around the castle. Here is a picture of Joel all the way down on the ground so you can see just how far up we were. (Joel did take a picture from the opposite direction but when I looked at them you could hardly tell where I was in the photo!) 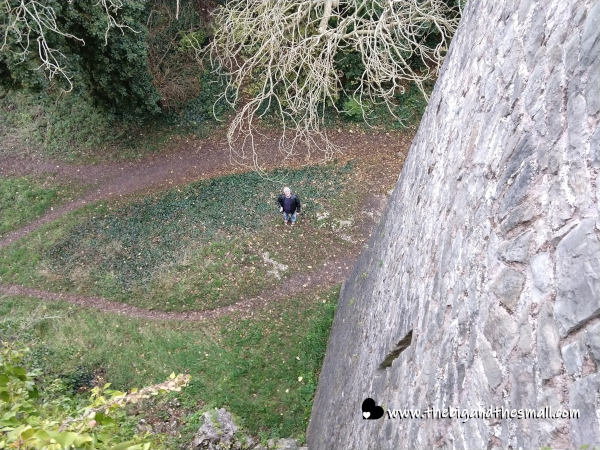 After perusing through the rest of the castle we returned back to the real world and rejoined Joel. Then Rachel led us a few more blocks away towards the river and across the bridge. At exactly halfway across this bridge, you can stand with one foot in Wales and one foot in England! Considering that Joel and I have a tough time determining which is our favorite between England and Wales, this seemed an apt photo for us to take. We'll just be in both at the same time, thank you very much! 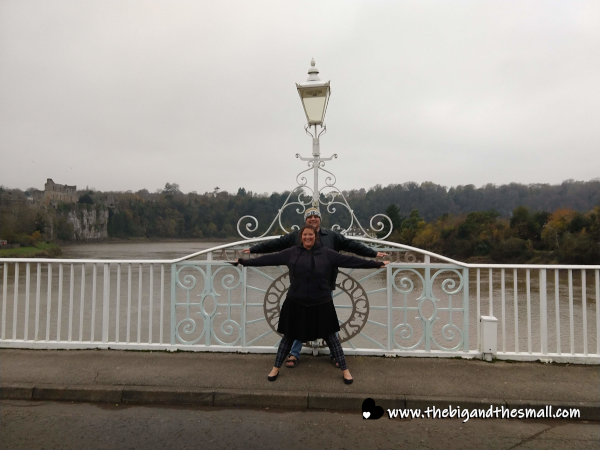 From there it was a cold and rather drizzly walk all the way back through town and up a rather steep hill to get back to Rachel's home. She lives in church provided housing which, while called a "parsonage" in most of the States, here is called a "manse." The name of her house is literally "The Manse" and that is part of her address as well, instead of a house number! That tickles me to no end. Rachel made us a delicious Mexican chicken soup for dinner which was the perfect food to warm us up after a cold, wet day. And still, I'll take all these cold wet days over the hot dry ones in Australia. I think I am just made for UK weather.

I'm taking tomorrow and Friday off to celebrate American Thanksgiving, but I'll be back next week!