Halfway Around the World - From Australia to Wales

The last week of travel has been overwhelming and kind of insane. Even if everything had gone according to plan (spoiler alert: it didn't), it would have been an exhausting week. I won't share our biggest disaster just yet, but if you follow us on Facebook you got a behind the scenes look as it went down. I have more to share about it but we'll get to that later. For now, let's get started with our journey from Australia to Wales! 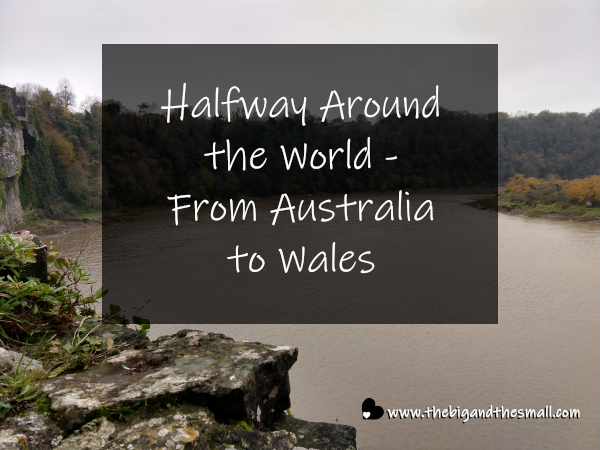 As much as we knew the journey back to the UK was going to be long and tiring, we were very much looking forward to it. We enjoyed Australia, but even at just the start of summer, the heat was beginning to be too much for us. As much as people complain about the gray, rainy weather in the UK, that's what we were looking forward to getting back to! Here we are at the airport with our excited faces. 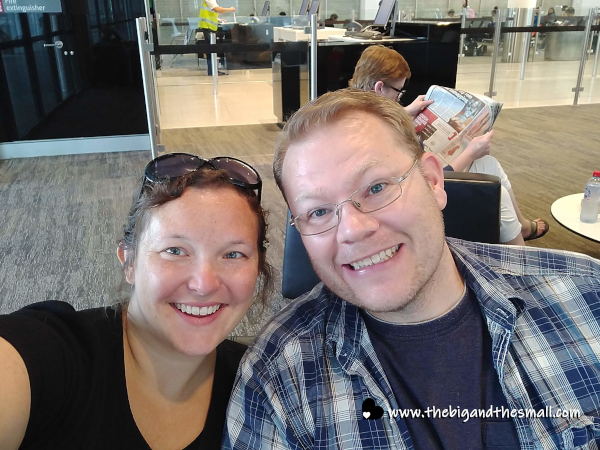 We left Elaine's house in Perth, Australia at 6:30 am on Tuesday morning. We did not lay our heads down on a bed again until 9:30 pm Wednesday night, in Chepstow, Wales. Since there is an 8-hour difference between the two, it was 5:30 am Thursday Australia time when we went to bed, which means we had been traveling for 47 hours. Whew, no wonder I was exhausted! (That's the first time I've done the math on that.)

Our first flight was a 7-hour journey from Perth to Bangkok, Thailand. We flew this time on Thai Airways - a new to us airline. I must say I was quite impressed with their level of service! On a 7 hour flight, we were served 2 snacks, a full meal, and offered drinks many times over. Each seat had its own TV screen and there was quite the selection of movies to choose from, including some very recent ones! I could not resist watching the movie Yesterday even though we did see it this summer when we were back in the States. It is in my top 5 favorite movies and might actually be my favorite movie of all time. The food was excellent and overall the flight was quite enjoyable. 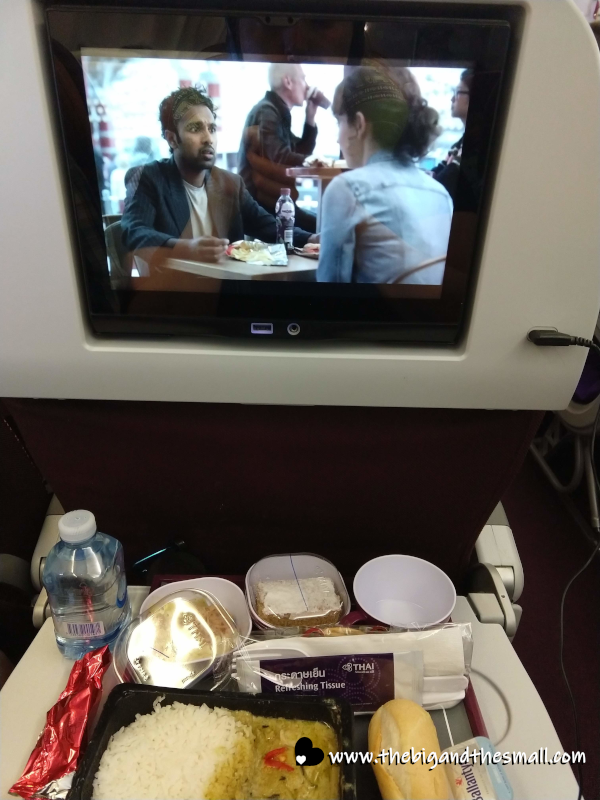 Our 9-hour layover in the Bangkok airport on the other hand... not so enjoyable. The airport was hot, barely air-conditioned, food was expensive, there was almost nowhere to sit, and the time just dragged. I know some people would see a 9-hour layover as a chance to get out and explore the city. I, however, am too nervous of a traveler for that. I just can't handle the idea of leaving the airport, wandering a city with our bags (even though we check some we do still have rather large carry-ons) and then having to go through security again. I'd rather just stay put. We also aren't in the financial bracket where we can justify paying for the special airport lounges...perhaps someday! For now, we just suffer through our long layovers.

When it was finally time to board our 13-hour flight from Bangkok to London I was excited to find that, again, our seats had individual screens for entertainment. For a time it looked like I'd be in the middle seat between Joel and a Scotsman, but with some clever maneuvering, the Scot managed to get himself moved to a different empty seat so we would both have some more space. So Joel and I had a whole extra seat between us which gave us some extra room to lay down.

I put on the movie Ocean's 8, hoping it would put me to sleep, and voila, it did! I actually managed to sleep for about 4 hours straight which is pretty darn impressive on an airplane. Once again I enjoyed the level of service by Thai Airlines - the food was delicious and we were given plenty of chances for drinks. Of course, no matter how pleasant a flight is, 13 hours is a really long time! For the first time ever since flying my ankles were swollen and they took several days to go down. We arrived in London at 6:30 am local time, exhausted, but happy to be here. 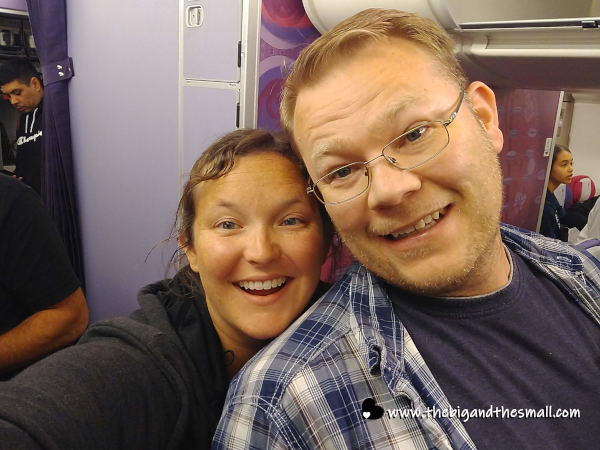 The exhaustion had to be short-lived for me, however, as I had to make a special trip into the city for a meeting. I cleaned up as best I could in the airport bathroom before heading out on the tube to navigate London by myself (Joel stayed back at Heathrow with our bags.) I hate to be a tease but I won't share what this meeting was about just yet...just know that good things are in the works and I could use some prayers that everything works out!

When I returned to Heathrow it was finally time to set off to Wales. We booked our bus tickets and then one (relatively) short 2.5 hour bus ride later we showed up in Chepstow! I shared a few weeks ago that in Australia I got to meet some women from the Young Clergy Women International group. Well, now I got to meet someone from that group again! Rachel is currently a minister in the British Methodist Church, though she hails originally from Pittsburgh, Pennsylvania. We actually went to the same seminary at the same time (she was a 3rd year when I was a 1st year) and we know a ton of people in common but we never met until just last week when we showed up on her doorstep to spend two nights!

We had, of course, gotten to know each other fairly well over Facebook messenger and Rachel was quite helpful in my application process to the British Methodist Church, always willing to answer questions I had. We were so excited to finally meet in person and it was fun to discover just how much we have in common. Joel and I also got along quite well with her fiance, Tom, and our evening together flew by quickly, despite our exhaustion! Tom and Rachel treated us to dinner at a nearby pub where they are known for their roast chicken. 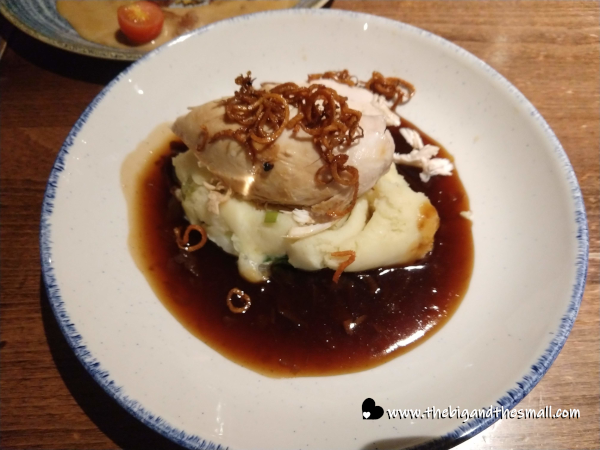 Joel got a little more creative, ordering a Welsh rarebit with cod. In the middle of dinner, a local came up to us to ask a few questions about where we were all from in the States. He said he couldn't help but overhear us (I can be a bit loud, especially when my ears haven't popped from multiple plane rides) and wanted to share about the time he lived in Oklahoma. I've really missed how friendly people are in the UK, and between the fab food, the cozy pub environment, and the random conversations it was a completely lovely evening. Everything culminated to remind Joel and me why were are so glad to be back in the UK. 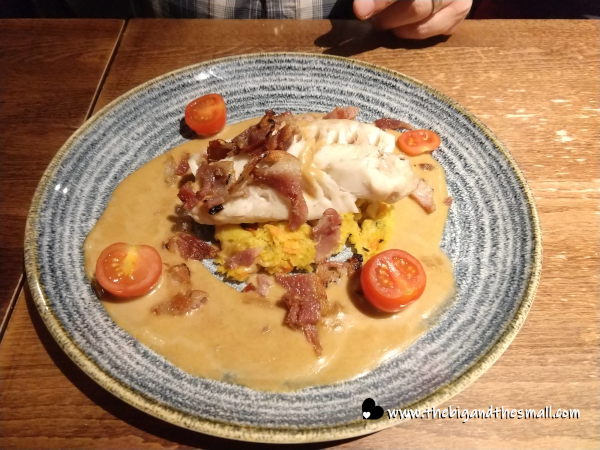 We only spent two nights with Rachel but we packed in a lot of fun - so stay tuned to hear all about Chepstow Castle and Tinturn Abbey!