Every year November 11th is a holiday in both the United States and the United Kingdom. The date was chosen because the eleventh hour, of the eleventh day, of the eleventh month of the year is when arms were put down to end World War I (known then as The Great War). The war lasted from 1914-1918, making this year extra significant as it marks 100 years since the end of the war. 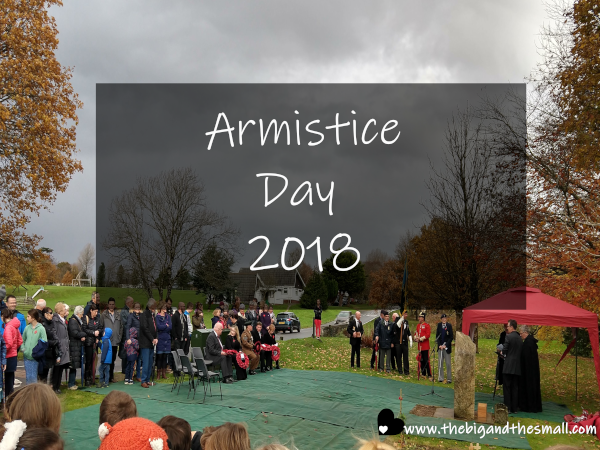 November 11th became known as Armistice Day in both the US and the UK, and it was a day to commemorate both the end of the war and to remember those whose lives were lost. In the UK it has also become known as "Remembrance Day", and there is a strong emphasis on remembering those lost, the sacrifices they made, and being grateful for the peace we enjoy because of their sacrifice. Yesterday we were blessed to attend a remembrance ceremony here in our local village. 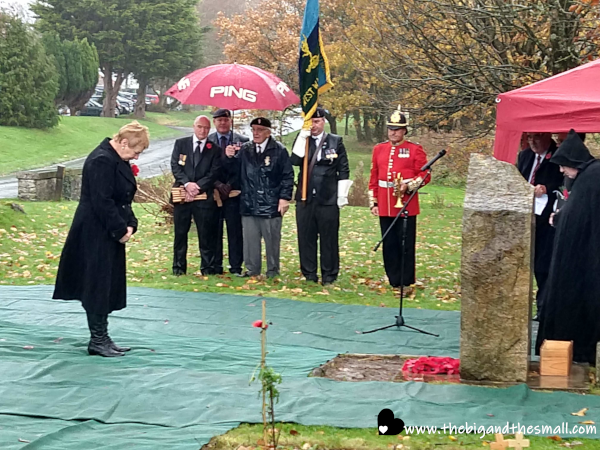 Despite some unfortunate weather, many people turned up for this service. It was held just across the street from the local Methodist church, where a stone has been placed in memory of all from the village who have been lost in combat. The weather conspired to make it very hard to hear the words of the service, but we could still feel the solemnity and sacredness of it. 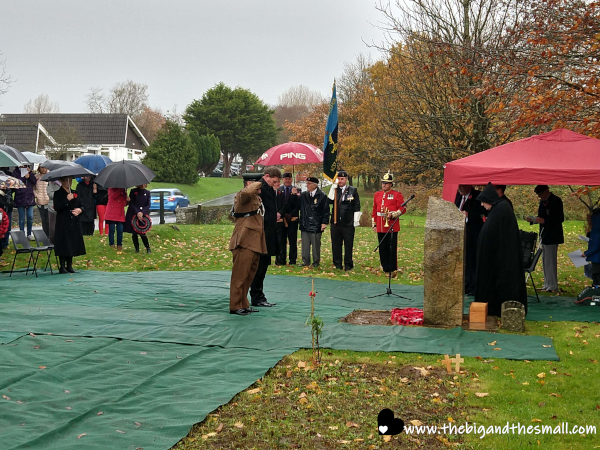 At one point the bugle was played while it poured the absolute hardest. I was awed by all of the gentlemen in this picture who kept their composure and performed their duty despite the deluge. 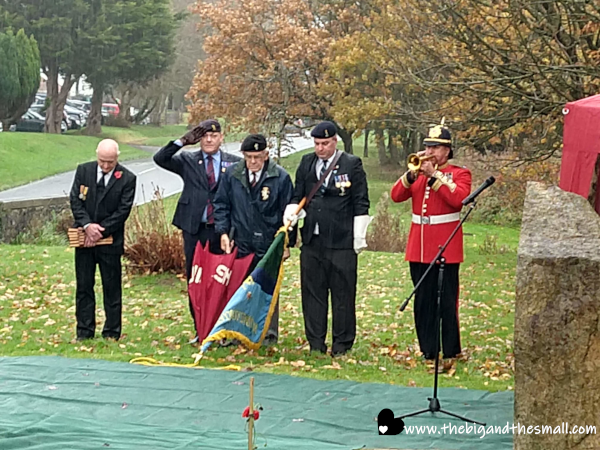 Towards the end of the service people came forward to lay poppy wreaths at the foot of the stone. The poppy has become a symbol of the day, and is often used in wreaths and in pins people wear both leading up to and on this day. The story is that the poppy flower was the first sign of new life to grow in the war torn fields where battles had been fought and where soldiers were buried. It has become a symbol of remembrance both personal (people will often say who they wear their poppy in honor of) and universal (in memory of all those lost). 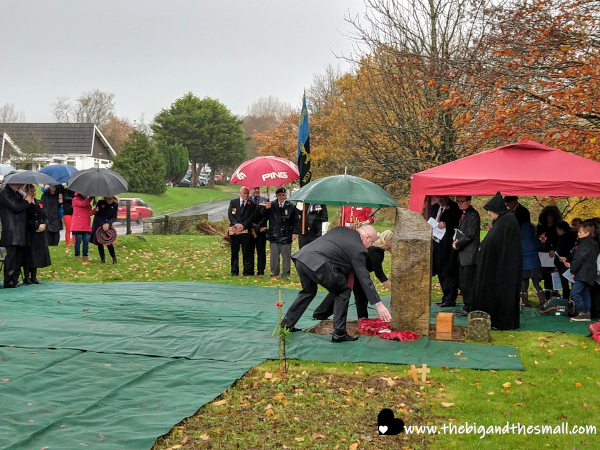 Here in Murton, after the poppy wreaths were laid, they also placed a cross for each person from the village who was lost in World War I. Each wooden cross carried the name of someone who died in the war. 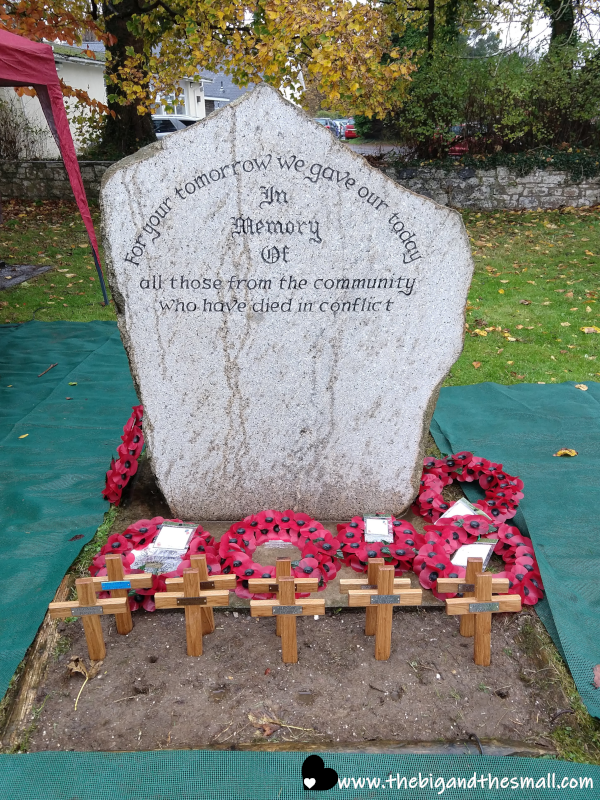 At the very end of the service, the children were invited to bring forward and place the memorial crosses they had been given. These crosses were marked with the poppy and the words "in remembrance." 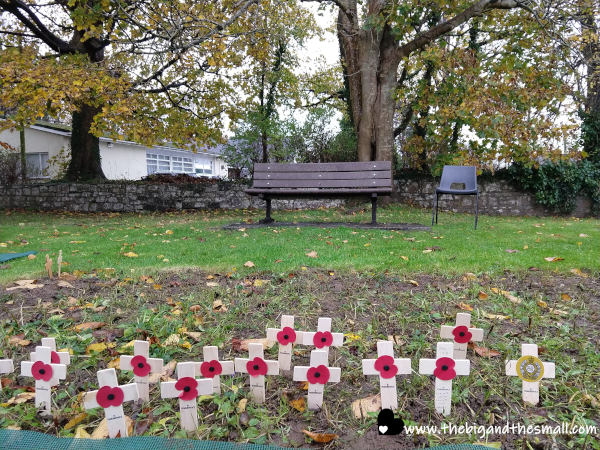 When the service was over, we went across the street to the church to see a display set up there. This art display is actually taking place all over the UK this year, Murton Methodist is just one of the locations. The title of it is "There but not there." The acrylic silhouettes are to remind us of all those who would be with us if it weren't for the war. For me it brought to mind not just those actually lost in the war, but all those the world never saw because of that loss. The ones who died would have had children, grandchildren and on who would be here today, and yet because a single life was cut short, those many lives never happened. 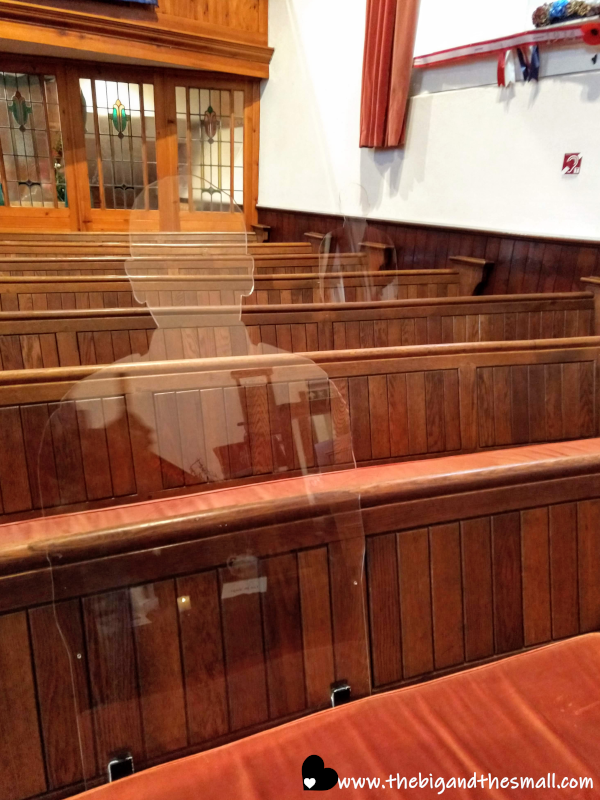 At the front of the church in the altar area was a very moving display marking the end of the war, and containing another silhouette. There and in other various places around the church there were also displays containing a lot of history about the war, those who were lost, and some survivors. It was quite educational overall, mostly geared towards children but it sure taught these Americans a thing or two. 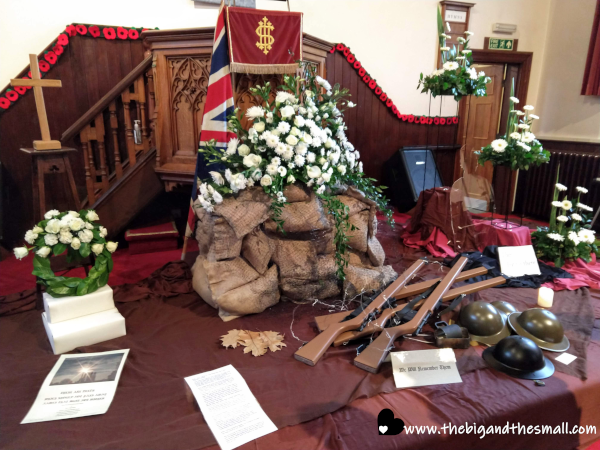 In the entryway to the church was a display about the actual signing of the armistice. Two more silhouettes were there at a table with the papers and other items that would have been there when it was signed. 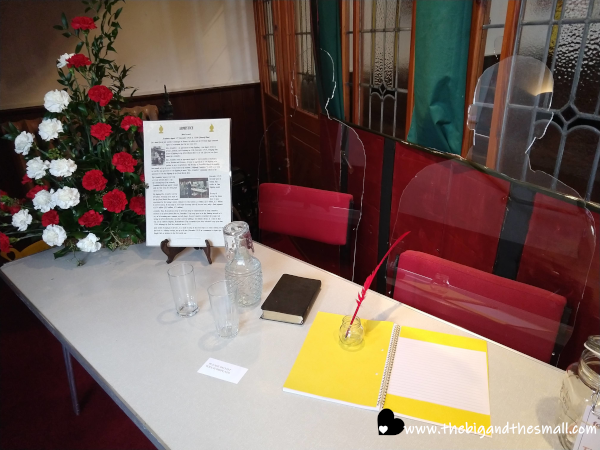 At the beginning I mentioned that when Armistice Day was established it was celebrated in both the UK and the US. While they once started as the same holiday, in the US it was changed to Veteran's Day in 1954. More than just a change of name, the holiday has really become something different in the US. Instead of remembering the end of the war, and honoring those who were lost, the day is, as the name implies, about veterans of all wars. 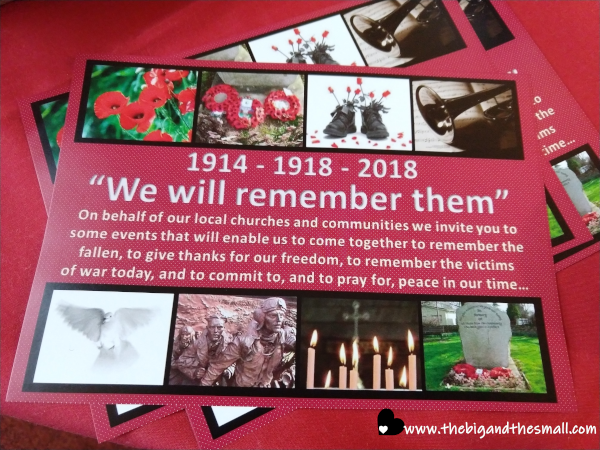 There are services around this time of year in churches and other community spaces to honor all those who have served and thank them for their service. It is a very important holiday, but having learned the history of Armistice Day and the significance of the date, I'm surprised that such a change took place in the US. What seems to be such an important day here - remembering those lost, acknowledging the horrors of war, praying for peace, is something entirely different back home.

I suppose the change might have occurred in part because we already had Memorial Day, which was established in 1868 after the Civil War, and now is a day to commemorate all those who have been lost in war. Even then, too often Memorial Day is overlooked in the US (in my experience) and sometimes becomes more about a three day weekend and the 'official start of summer' than a day of true remembrance.

I found myself impressed with the level of remembrance and reverence surrounding Armistice Day here. Granted, we've only experienced one portion of it in one town in Wales, so perhaps it, too, varies depending on where you are. I found myself reflecting on war, on loss, on peace, on gratitude, on what impact the World Wars have had on the world than I ever have before. I am grateful for this holiday that invites us to reflect, and for all it stands for.