I'm baaaack! We are fresh off a week in Bali and I am here to update you on the last bit of Halloween celebrating we did before starting to share tomorrow all about our trip to Bali. Way back in mid-September (shortly after we committed to what turned out to be an ill-fated housesit) I discovered a Halloween event that was scheduled to take place on November 2 at a place called King Carnival in Mandurah. We had King's Carnival on our list of places to visit anyway, so when we learned we could get 4 hours in the park with unlimited rides on the attractions, mini-golf (all of which would normally cost about $5 each!), and special events just for Halloween all for only $20 (Australian) each, we were sold! 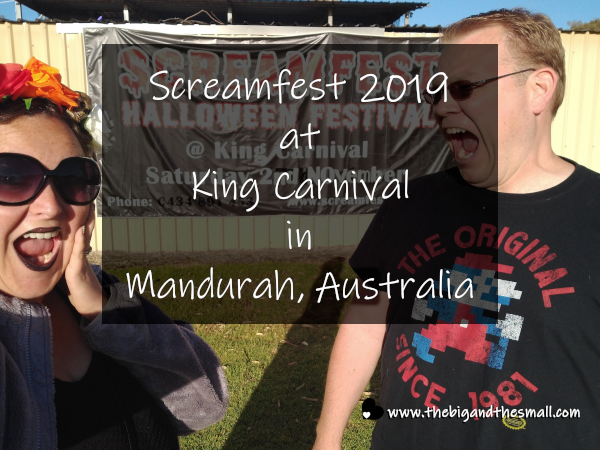 The weather that day was absolute perfection and for some reason, Mandurah (about 30 minutes south of where we are currently) does not have the same fly problem that Byford has. Here, we cannot step foot outside the house without getting inundated by flies. There, we were out all night without a single problem! The event kicked off with a "Zombie Walk" over the Mandurah Bridge, complete with a skeleton drum corps. I love a good drum corps almost as much as I love Halloween so this was a fantastic way to kick off the evening! The drummers led the parade all the way to the gates of King Carnival, played there for a while, then spent the rest of the evening (on and off) marching and playing around the park! It was a huge part of what made the night so special. 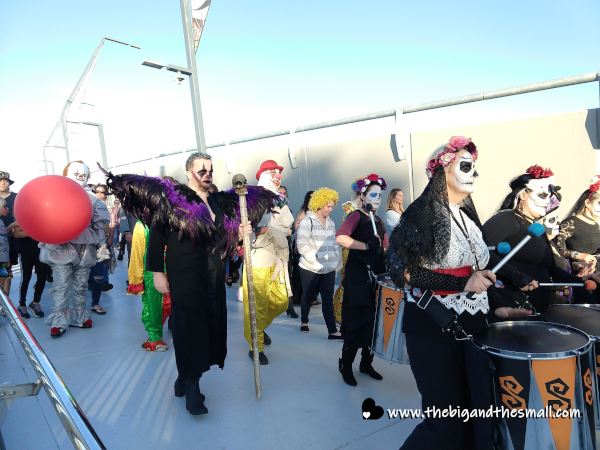 The event was scheduled for 6-10 and we were let in the doors right at 6. We immediately chose to head for the mini-golf before it got too crowded! Later, once it was dark, they had glow-in-the-dark golf balls available which I would have loved, but every time we passed by after nightfall the course was jam-packed so I'm glad we got it in early. The course wasn't very creative and it was in a bit of disrepair in a few places, but I still enjoyed it. 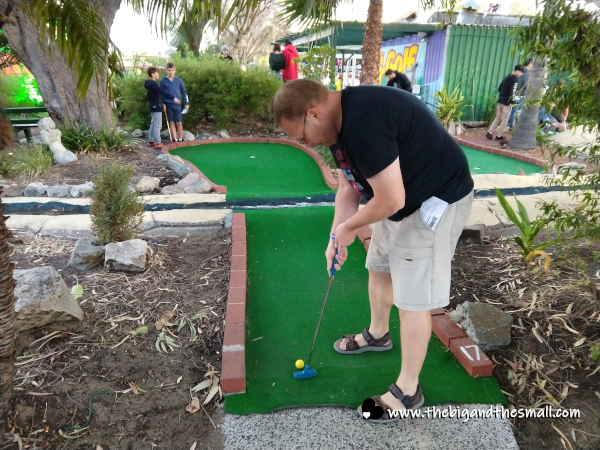 As the sun started to set, we stood in a short line before getting on the Ferris Wheel. Guess what - I also love Ferris Wheels! (This night was practically made for me, it seems.) We skipped a lot of them at Christmas events last year in the UK (paying $5+ each for a single ride just never seemed worth it) so I was excited to finally get on one. The view of the sunset from the top was incredible and we rode it again after the sun went down just for good measure. (After all, it would normally cost us $5 Australian each to ride it so since we rode it twice we got our money's worth just on this alone!) 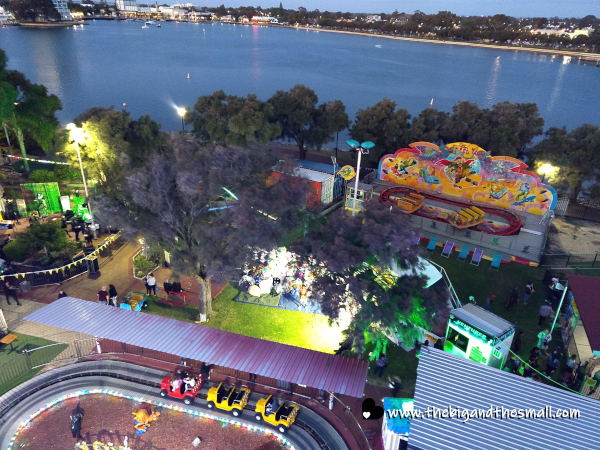 Next up was a haunted maze set up in a corner of the park. We had seen from the top of the Ferris Wheel that it wasn't a very large or elaborate "maze" (I use the term maze loosely, there was only one path to follow) but we figured it would be fun nonetheless. We entered shortly behind a trio of tween girls who were much more frightened of it than we were. They begged us to stay right behind them so no one could sneak up on them and we obliged. They reminded me a lot of myself at that age - loving and hating being scared at the same time! (Okay, that's also me now.) I'm very susceptible to jump scares and one guy got me right at the end - I couldn't tell if he was real or fake and when I said so out loud to Joel he suddenly sprung to life and said, "I'm real!" 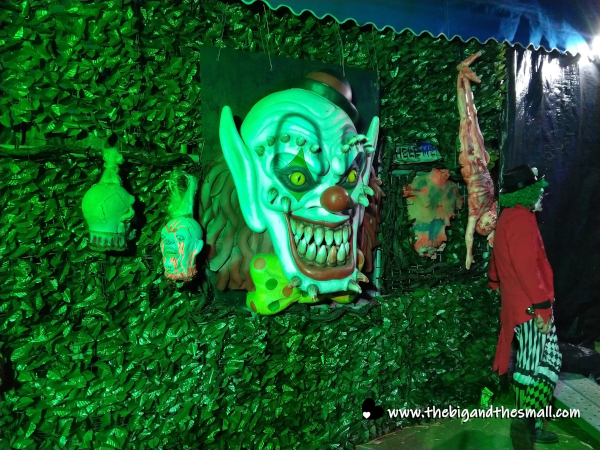 We got to try a "7D" theater experience which was the only real bummer thing all night. It was in a trailer that was hot, the seats moved around far too much so I started to get motion sickness and the 3D glasses and effects were inferior to what we used to have in our home theater in our basement. But that's the only part of the night I would give a thumbs down. There were professional face painters doing special gory effects - I thought long and hard about having something done but decided that since I don't have good makeup remover with me and I promised Elaine I'd go to church with her the next morning that probably wasn't the best idea. This spooky little house was where the kiddos could go to get some guaranteed candy. 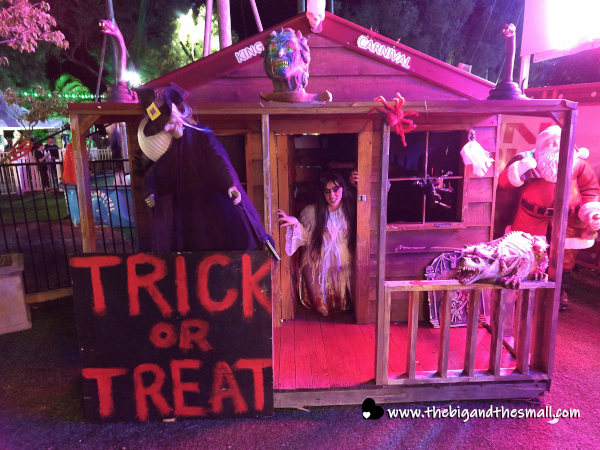 The biggest event of the night was a costume contest in which 3rd place was $50, 2nd was $100, and 1st place was $200 cash! Despite having such legit prizes at stake the event itself was kind of a joke. They didn't separate anyone into categories so they had adults in extremely elaborate and creepy costumes (see below) competing against small children in cutesy and adorable costumes. It was judged completely by the audience (which consisted of maybe 20 people, it was not well announced, we just happened to stumble across it at the right time) and just overall run poorly. There was a guy dressed up as the new Joker who was 1000% in character and totally deserved to win but the $200 went to an 8-year old in a standard store-bought witch costume. I mean, she was cute, but it just didn't make sense to have her competing with some of the others, they were literally on different levels. Ah well, such is life! 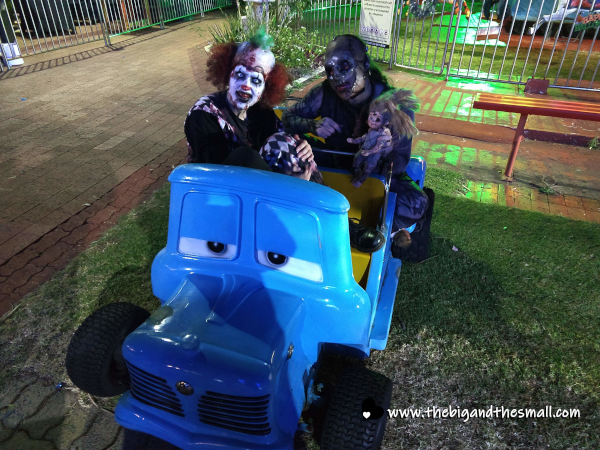 We stayed until about 9:30 (which is late for this old at heart lady) and thoroughly enjoyed ourselves the entire time. For dinner, we had a "demon dog" which was a chicken sausage smothered with salsa, guacamole, and sour cream. It was a bit pricey for what it was but it was also a fundraiser for a local community organization so we decided that was worth it. My favorite picture of the whole night is this selfie we took that got photobombed by some real creepers! 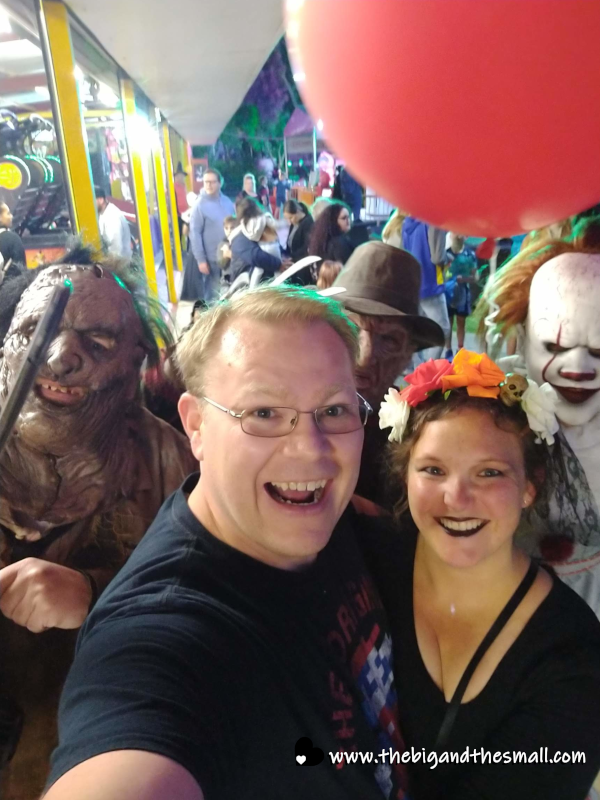 I am so glad I found out about this event and that we went to it. We absolutely got great value for our money and I had so much fun enjoying so many of my favorite things - mini-golf, Ferris wheels, drum corps' - all with a Halloween twist!