This is a general guide on how to make a good raid defense. Individual heroes can break these rules, but if you follow these concepts you should do pretty well. First, let's start with your tank!

Which one is the tank?

Your tank is your middle guy. He's going to take the most damage from gems. Here's a guide: 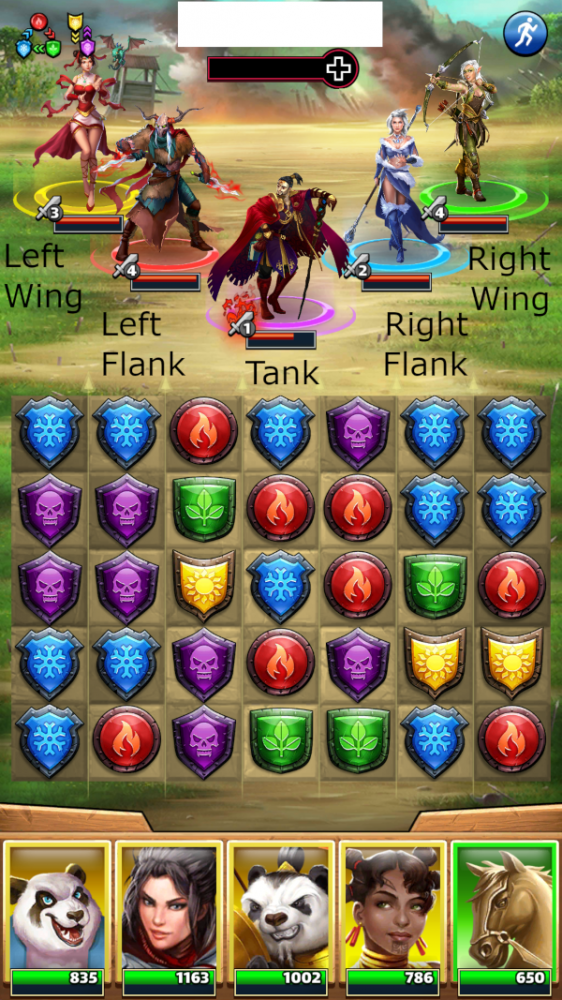 As you can tell from the image (and from experience playing), the tank takes damage from the center three rows of gems. Each of the other guys only can take damage from a single row until the others blocking them are gone. This makes each of their roles VERY important! The tank must survive as long as possible, but that's not all! If the tank doesn't really DO anything except stall, it not only stalls for your defense team, but also for the OFFENSE team!

Wait, how does that work? I don't get it!

Imagine a hero with 20,000 hit points but no special abilities. Would this make a good tank? NO! Sure, it will stall for a long time, but the offensive team can throw gems to charge THEIR GUYS, too! In the example above, we see a terrible, terrible board for this team. If that tank did nothing to impact the game with his special ability, all those purple gems can be thrown to clear the path for useful yellow gems to charge up your guys! Eventually, the special abilities will charge up and all the other heroes will start dying.

So what makes a good tank?

You want a hero that can survive but also impact the offensive team when the special ability goes off. Heroes that are 'pure' healers make TERRIBLE tanks, in my opinion. Sure, they stall, but a good player will use that time to build up their special abilities and pick off the rest of your team (more on how to use this strategy here). So you want a tank that can last AND has some impact. In this example, we find Kunchen. He's a healer, so he's hard to kill. He also removes status ailments, so you can't build up these detrimental effects on his friends. He naturally resists defense attribute effects, making him extra hard to kill! So, he's got the hard to kill part down, but he also gives your guys defense reduction making them easier to kill! He's an excellent tank, but he needs help from his flanks.

What makes a good flank?

Glad you asked! You want something different than your tank. If your tank is a healer, you should really try to avoid another healer as a flank. If your tank doesn't heal, you probably want a healer in your flank (or even BOTH flanks!). But NEVER put two pure healers next to each other! Why? Because that gives the attacker an outlet to throw junk gems with no real impact. Healing a team with no damage does nothing! Remember, though, a pure healer does nothing but heal. Most do something else, but often those effects are only heal effects, too (like removing buffs or ailments). A healer that also buffs or gives ailments is better. One that gives damage is even better! You just need to make sure not to give your opponent a way to throw gems without worrying about the repercussions.

So a good flank would be something that compliments your tank. I often have slow heroes as tank, average speed heroes as flanks, and fast or very fast for the wings. It doesn't have to be that way, of course, but that's a good guide to try and get your guys to build their special abilities well. If they all go off in the same turn, that's devastating!

Got it! Anything else I need to know?

Yep! Order matters! Heroes use special abilities from left to right. So try to consider how you'll want them to go off when ordering them. Oh, and also! Color matters! If your tank is purple, putting a yellow as a flank means the strong color against the flank will do weak damage against the flank, so they'll live longer!

Ok, I think that's it. If I think of anything else, I'll add it! Thanks for reading this far!