McDonald's Around the World: Pordenone, Italy

When we were in Venice earlier in the week, Joel spotted a McDonald's and wanted to eat there but I convinced him we should wait until we were somewhere less, well, Italian. It just felt wrong to eat at an American fast-food chain while in such an iconic Italian city. However, we knew we didn't want to leave Italy without trying a McDonald's there, and all our talk of McDonald's had made Sef start craving some American classics so after our day in the mountains we sought out the golden arches for a late lunch! 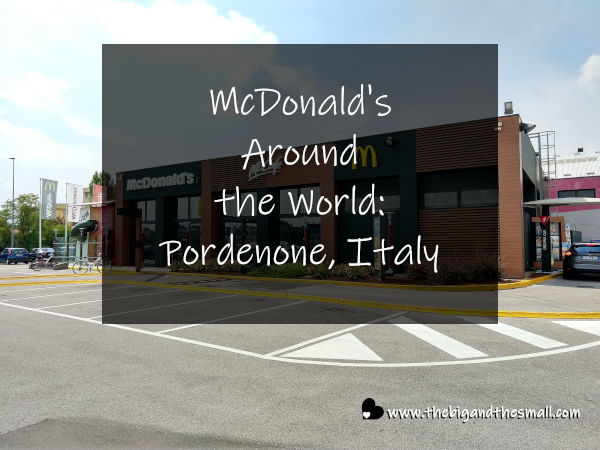 Fun fact - I did not actually know what town in Italy we were in when we ate at this McDonald's since Sef was driving. In order to be accurate for this post I was googling the nearest towns I did know to try and figure it out and ended up coming across my Google timeline. This thing is scary accurate - not only could Google tell me that I had been at this particular McDonald's on July 21 it also told me I was there from 3:07-3:52 PM. Um, thanks? I suppose if I ever need an alibi this could come in handy... What do you all think - is Google knowing our every move helpful or creepy? I'm undecided...

Anyway, back to McDonald's! As you can tell from the picture above, on the outside it looked like a typical McDonald's. It did on the inside, too. And, as has been standard for every single McDonald's we've been to outside of the USA, we ordered at a kiosk. I find this particularly helpful because we can always select English as our language and it makes ordering a breeze. Although it does still take us a while to order because we try to look through every single option to make sure we try the most unique items on the menu. I think we took a good five minutes longer to order than Sef did. 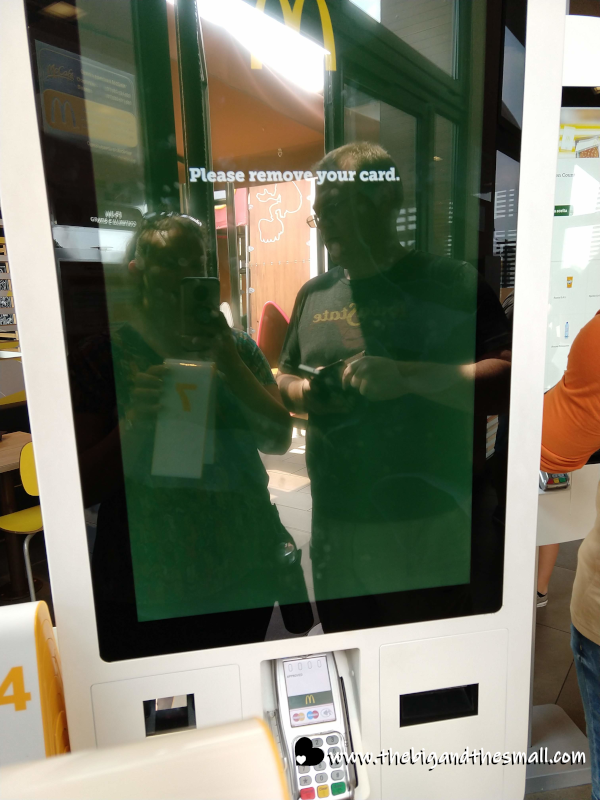 Sef was missing American food (he has been living abroad for a long time!) so he went with the classic chicken nuggets and French fries. His food arrived fairly quickly but ours took for.ev.er. Like, I know we took longer to order, but the wait time was ridiculous. Finally, Joel went up and asked about our order and was told that the chicken sandwich is what slowed our order down... I think they just forgot about us and that was a quick excuse. Sef was pretty much done eating by the time our food arrived, so no points for good service here.

There really wasn't a whole lot we could find on this menu that was super unique so we only ordered three items - although I did try to talk Joel into ordering a McFlurry that looked like it had interesting toppings, then he reminded me that we could get gelato instead. Yup, I would definitely rather have gelato.

Our chicken sandwich was a basic McDonald's chicken sandwich except for the toppings - ham, a special sauce (maybe mayo + siracha? it had some kick to it) and sauteed zucchini (that's courgette for our British friends)! I am obsessed with zucchini right now and I have literally never seen it at a fast-food restaurant so that was exciting. While the description of it sounds good, the execution was meh. I probably would have been happier with a typical McD's cheeseburger, to be honest.

Really the whole meal is something that sounded good in theory but was meh in person. The fries were topped with cheese sauce and pancetta - yum, right? Eh. The cheese made the fries kind of soggy and the pancetta definitely could have been crispier. The fried balls you can see in the picture were fried gruyere cheese with bacon, and like the fries, they lacked flavor. Plus they were expensive, at €2.50 for the box of them only containing 5 total, that made them £0.50 a pop! Definitely not worth it. 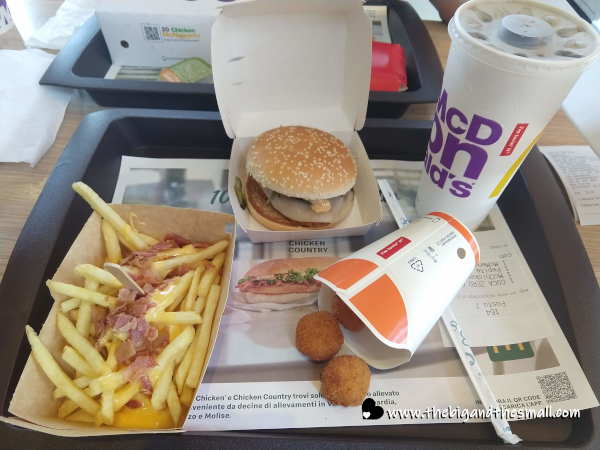 In pretty much every other place we have tried McDonald's it has seemed at least mostly worth it and most places we have found something new and really good to try. This trip was an overall meh. I don't know if it's because Sef's chicken nuggets looked better than anything we ordered or if I'm just so in love with Italian food that everything else pales in comparison, but this was a disappointment. So learn from us - if you go to Italy - don't eat at McDonald's! It's just really not worth it.

Locations like Italy make your McDonalds around the world project seem really sacrificial.  You had to use a meal in Italy to not eat Italian food. You have done the leg work so others don't have to, there is value in that. I have to say, from your post, it seems the only value in McDonald's in Italy may be the American fast-food craving solution. None of that looks very good.

Yes, it sucked not to eat Italian food! I would say, yes, if you are someone like Sef, an American living full time abroad and have a sudden craving for bad American fast food, this will definitely hit the spot. If you are only here for a short time, don't waste a meal on it! It's not even cheap so you don't even get the advantage of saving money, lol.