Okay, so I might have massively fallen down on my job of keeping the blog updated 5 days a week. In my defense, I went through a rigorous job interview that spanned multiple days, plus we have traveled extra and been hanging out with friends, all of which makes finding time to blog exceedingly difficult! We are in Italy at the moment, and I already wrote about our big day exploring London, but now I'm going to back it up and write about our trip to London. 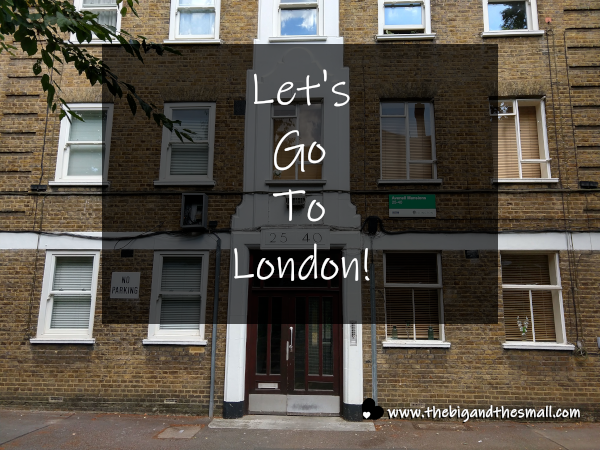 Last we left the story, Joel and I were sitting in the Chicago airport for 9 hours waiting for our flight. Weirdly, the wait went by super quickly, in part I think because I was anxious about the presentation I needed to write for my interviews that I had yet to write and the more I procrastinate on something the more time flies for me. When it was finally time to check-in for our flight our fancy "premium" tickets gave us 2 checked bags each. The guy at the desk briefly tried to ding me for an overweight bag because one of my bags was 3kg overweight, but since the second bag was 10kg underweight a colleague told him to just let it go. Thank goodness, I didn't need another reason to be annoyed with Norwegian Air. 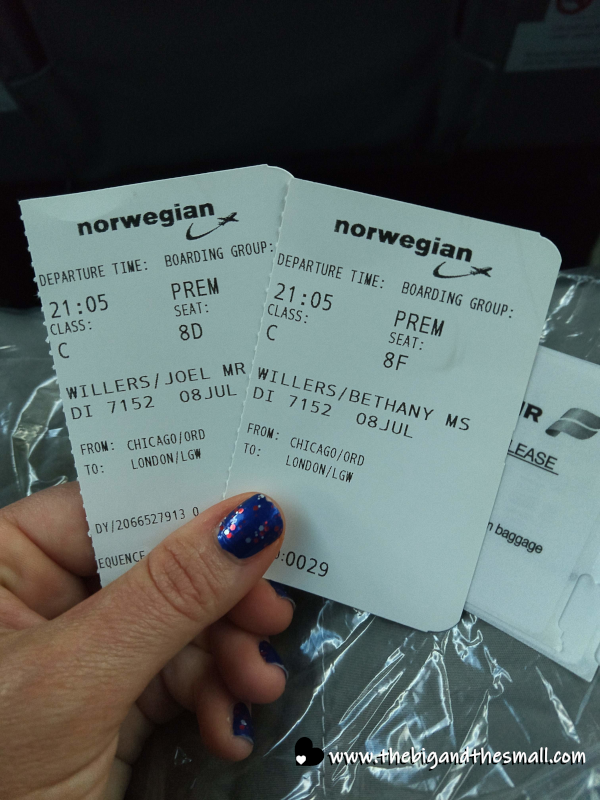 Other than the extra bags, and some provided food & drinks, we didn't really know what premium meant. Turns out, it's NA speak for first class! We got to board before everyone else and when we found our seats we were shocked at how awesome they were. We were in the last row of first class which was perfect as no one was behind us. The seats were huge and they not only reclined further than usual they had a foot rest! We tried not to take too many pictures as we didn't want to be totally obvious what a new experience this was for us, but it was awesome. They even came around before the flight took off to offer us water and juice. 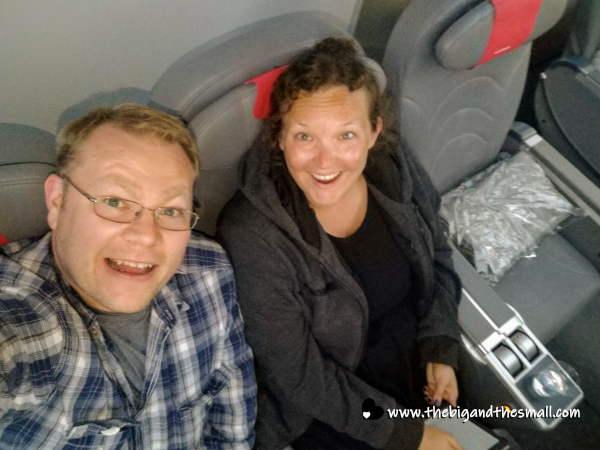 Our original plan for the flight was to sleep as much as possible so we could immediately adjust to local time when we arrived in London. However, when we realized how awesome this flight was going to be for us we wanted to stay awake and take advantage. I had a glass of wine with dinner, which was a delicious chicken and veggie mix. And then, we discovered that we each had our own TV that popped up out of the armrest and it had new-ish movies including one we had missed in theaters last year - Aquaman! So we watched Aquaman before finally getting some sleep - the best I have ever had on an airplane. 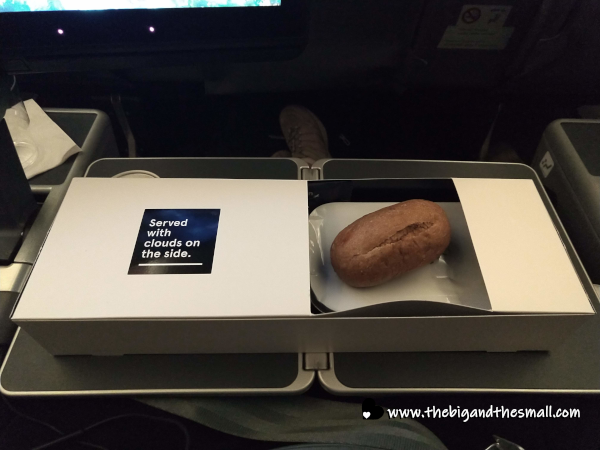 In the morning we were woken with a gentle shifting of the lights and given a simple breakfast of bread, cheese, and fruit. Oh, and several cups of tea because of course. I almost didn't want to get off the flight, but I was excited to see Steve so off we went! In striking contrast to our experience with passport control the first time we entered the UK, this time was really easy. Instead of talking to a border control agent we simply stuck our passport in a machine, got a green light, and off we went. We actually found an agent to speak to, making sure that was all we had to do because it felt deceptively simple, too good to be true. They confirmed that was all we needed to do here so we grabbed our bags and went out to meet Steve! 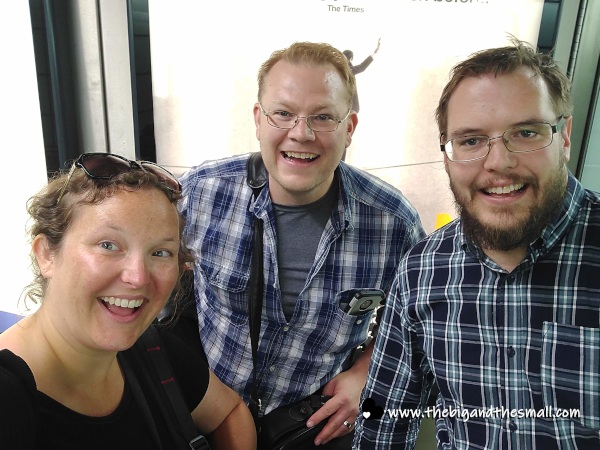 For the next part I am so glad we had Steve with us, as we had to navigate the city via train, underground, and lots of walking to get to the flat we rented through Airbnb for the week. One particularly delightful part had us passing through King's Cross station, which any devoted Harry Potter fan (like myself) knows is where Platform 9 and 3/4's is located! They actually have a set up where you can pretend to be pushing a cart through the wall, complete with wand and scarf appropriate to your house (Hufflepuff here!) but the line for the official photo was long and I'm pretty sure it cost money. So I settled for this close approximation. 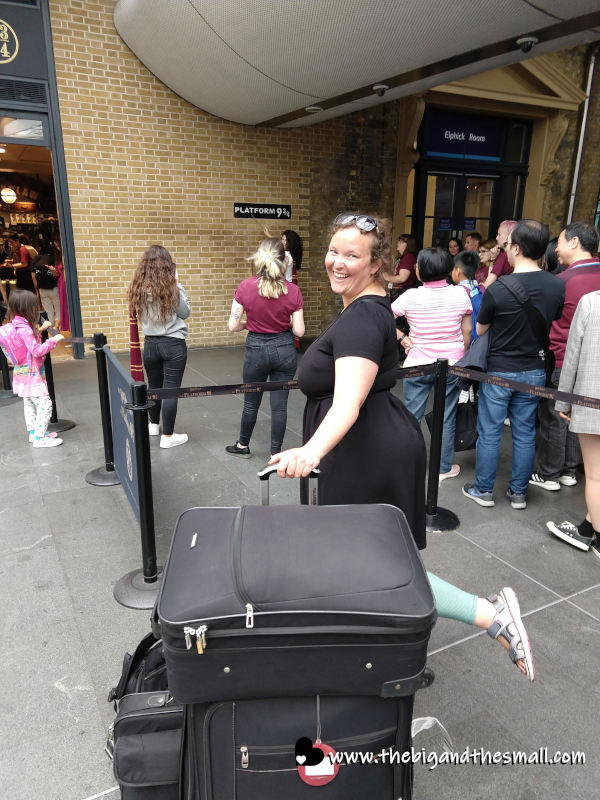 The underground itself wasn't too bad, pretty clean and at this time of day at least (mid-afternoon on a Tuesday) the ones we took weren't too crowded. Which, thank goodness, because we had a lot of luggage with us. To be fair, we have one whole less bag than we did last year; but when you have to haul these bags all over creation, it still seems like too much stuff! 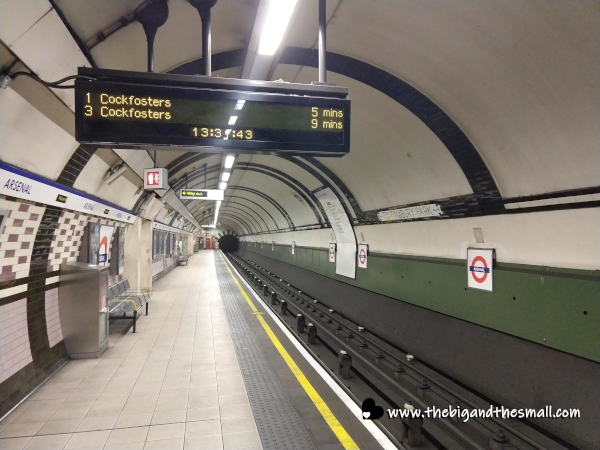 Once we had reached our final train stop and were walking the last ten minutes to the flat, we thought we had finally made a travel transition without any major incident. Joel went so far as to say that out loud. So you know what happens next, right? Some form of disaster. This time, my suitcase failed. The wheels suddenly stopped working properly, so we paused to check out what was going on. As I touched the back wheel I suddenly jumped in surprise as it burned me! The wheel had somehow gotten so hot that part of it melted and that's the trouble we experienced. We poured some water on it to cool it down and Steve set to work seeing if he could fix it. 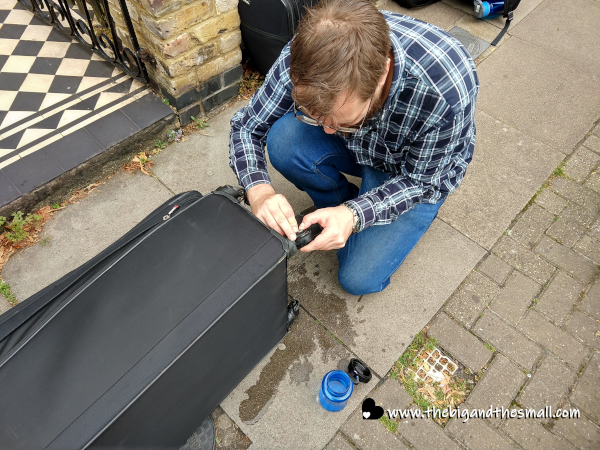 After a few minutes, it became clear that wasn't going to happen in the middle of the street, so we left Joel with the bag while Steve and I went ahead to check into the Airbnb. At that time we noticed in the handle of my small luggage had failed as well. (This one did turn out to be easily fixable.) 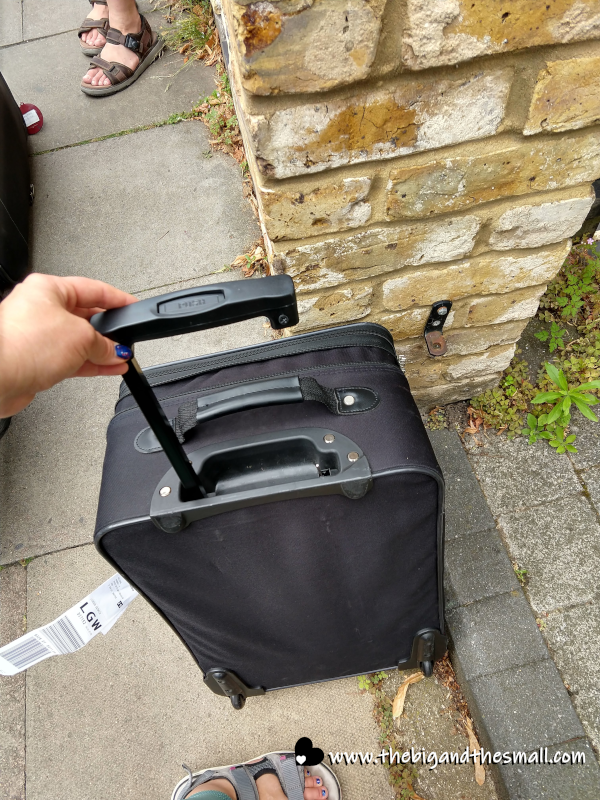 We made it to check-in, went back to get Joel, and carried the big luggage to the flat and up several flights of stairs. Then I promptly collapsed on the ground. All told from airport to Airbnb collapse about 3 hours had passed, it was exhausting! After some time of resting/napping, we scrounged up some groceries for dinner, then watched an episode of Black Mirror. I made it till 9 pm then called it a night as I had my first interview the next morning! 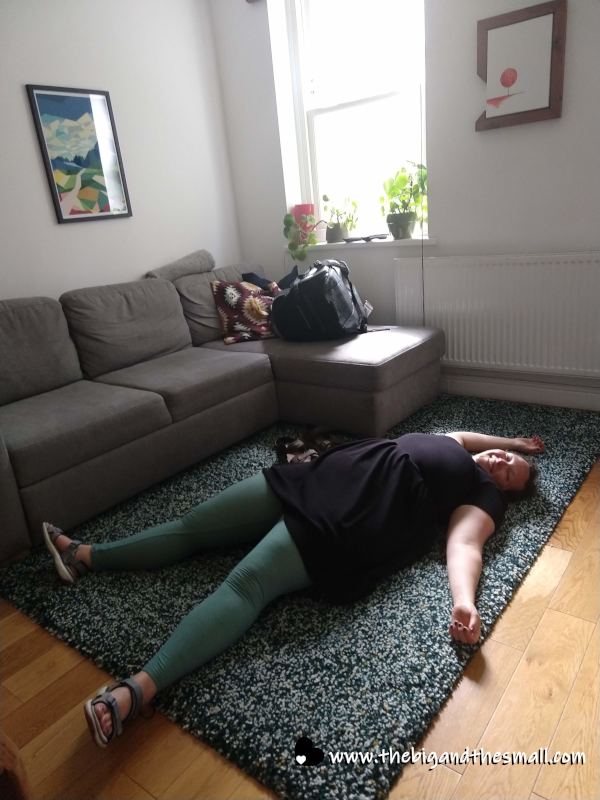 Over the course of our time in London, we did what we could to fix the wheel on my luggage, but in the end, it was a lost cause for us. We donated it to a charity shop in case someone wants to buy it and take a whack at fixing it, but we didn't have the proper tools or the time. Instead, we bought a new piece of luggage for £35 that is not nearly as nice but should suffice for the next year or so. Fingers crossed!

Why did he have to say it OUT LOUD before you made it in?!?

Steve and I both made fun of him for that. It was totally his fault.