Like many of you, I imagine, a new sort of technology has entered my life over the last couple of months of quarantine/lockdown - Zoom! I had heard of this program before, and even used it once or twice, but as soon as the world shut down it suddenly became much more commonplace. From family gatherings to friend reunions to attending large meetings back home, Zoom has been amazing! 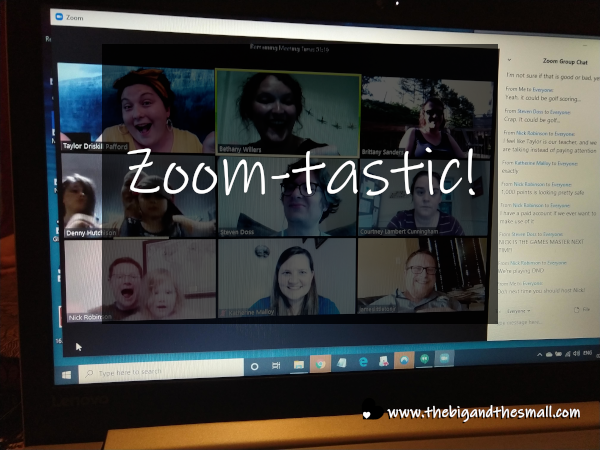 In my daily work life here in the UK, Zoom has not taken on much significance. At least, not yet. When I started at Notting Hill Methodist Church I did a few weeks of worship on Facebook live. On Easter, we switched to pre-recording and posting worship videos on YouTube (then sharing on WhatsApp, Facebook, our website, etc.) Starting next week, we are going to try Zoom! I'm excited to try a format in which I will get to see our parishioners rather than just the one-way format we've had where they get to see my face but not vice-versa. We do use it every Thursday for a brief staff meeting but running worship that way will be a whole new story!

However, I have seen Zoom work with large gatherings! A few weeks ago my district back home in the UMC held a district meeting on Zoom, and even though it was 9pm my time (3pm) for them, I decided to jump on and check it out. My friend Sarah shared the link with me so at first Zoom had me labeled as her, but then I figured out how to change my name. It was interesting to scroll through the pages and pages of attendees and see the various people who were gathered. In order to run the meeting efficiently, they muted everyone except the current leader/speaker. We could even take votes via polls run through Zoom which seemed to work really well! Our Annual Conference has obviously been canceled (would have been in June) but we will conduct some vital business parts on Zoom. This is actually really exciting for me because I would not have been able to attend in person, but now that some aspects will be online I can attend! 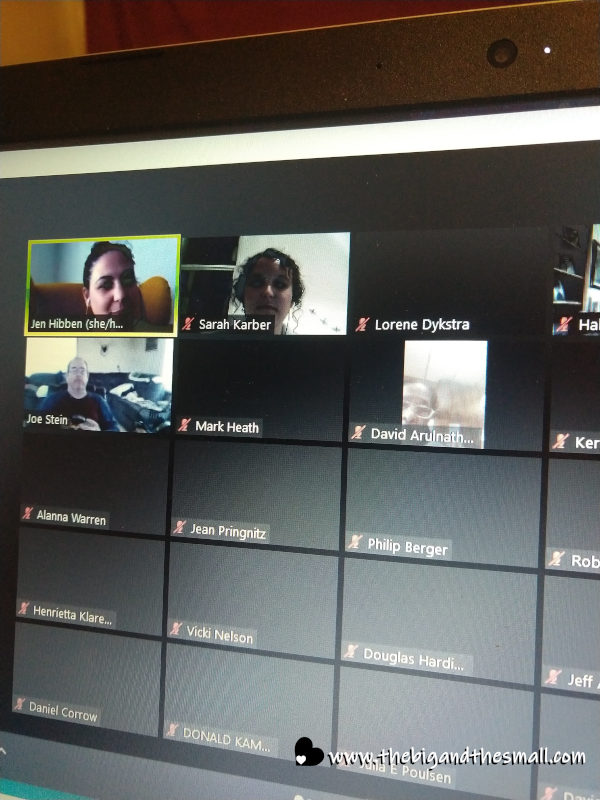 One of the first Zoom meetings that popped up for me was with my family. My mom's brother and his family live in Colorado and for a few weeks we were gathering weekly on Zoom. It was really fun to see everyone's faces and catch up! What strikes me about this one is that, really, we could have meeting like this all along. But it took quarantine for us to think about doing it! I hope we continue to gather this way every couple of months or so even after the pandemic has passed. Since we live abroad now it's a great way to keep in touch when we can't see family in person! 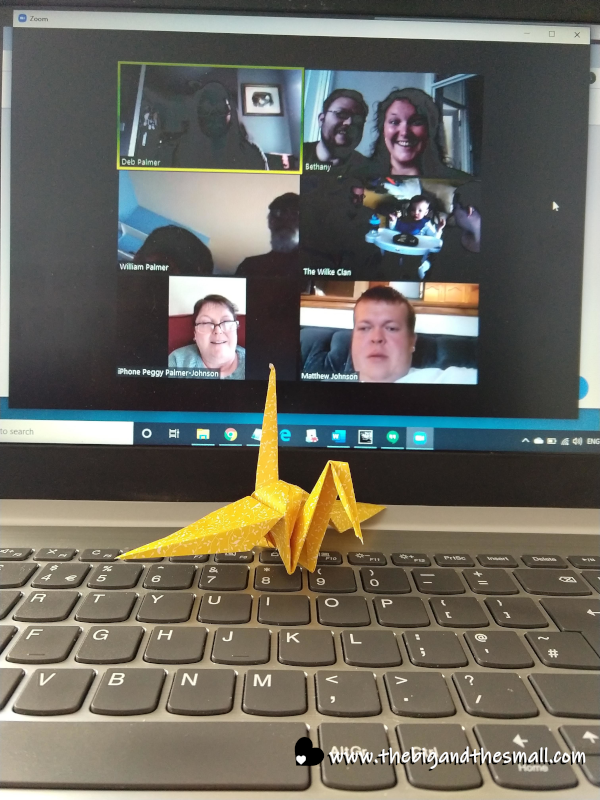 As part of staying fit for ministry, I have been a member of a covenant group since 2015. The four of us meet once a month to check in with each other emotionally, spiritually, and professionally. For several years we met in person, then when we started moving across the state, to different states, then out of the country, we moved to holding our meetings online. We used Facebook video chat for a long time, but of course, this last time we used Zoom! (Pardon the unflattering picture, Heather took it without telling us, and I was in the middle of talking, haha.) 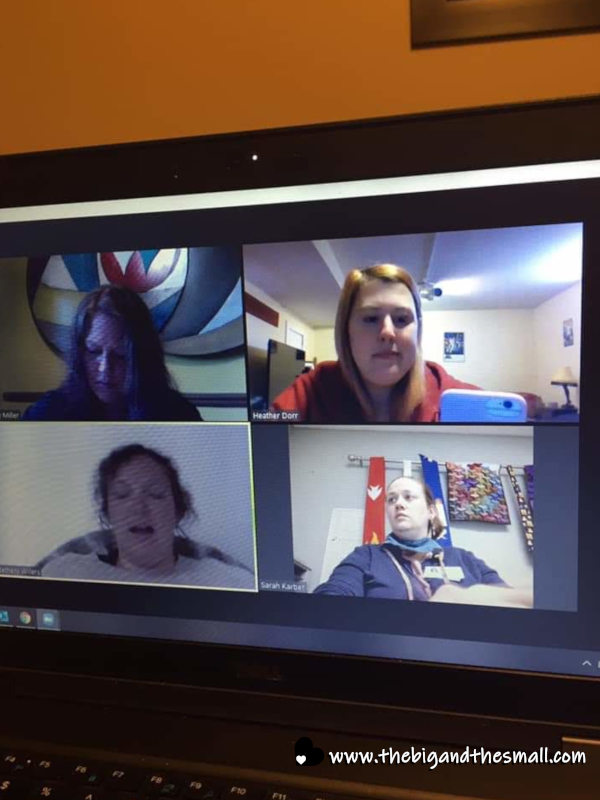 Perhaps my favorite use of Zoom has been reuniting with my seminary friends. We graduated ten years ago and despite a few gatherings here and there (mostly within the first couple years of graduation) I haven't done much more than interact on Facebook with everyone. When Taylor (my former roommate) mentioned a game night she was doing with her youth on Zoom, I convinced her to do the same thing for a group of us from seminary. It was a bit of a challenge to find a time that worked for both me (six hours ahead) and everyone who now has kids (when did we get so old!) but we made it work for a good chunk of us and gathered together on a Saturday night. 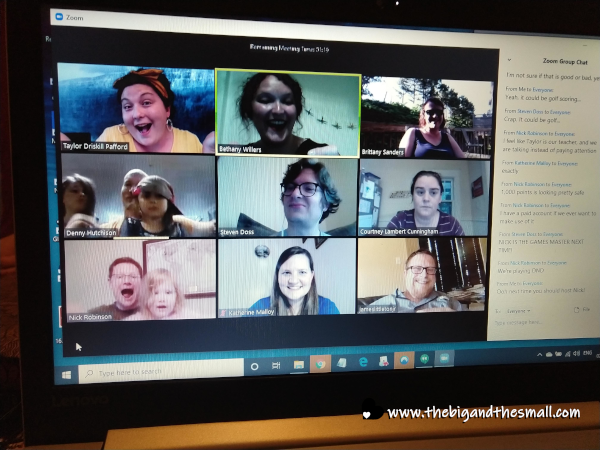 Not only was it good to see their faces and catch up on life, but the games Taylor ran were also incredible.

First, we played "Where in the World is Taylor?" She changed her Zoom background and we each had about 20 seconds to write down where we thought she was. Then, all at the same time, we revealed our answers and Taylor awarded points. She used both real places (i.e. Westminster Abbey) and movie/pop culture places (i.e. Monica's kitchen from friends) which I thought was particularly brilliant.

Second, we played "Silent Karaoke." Taylor would mute herself, then turn on a song and jam out/sing to it. We had to watch her without any sound and guess what song she was singing too! It was hilarious. She made sure to choose songs that had been popular when we were all in school together so it added a hit of nostalgia to something that was already super fun.

Finally, we played "Taylor Swift or Lamentations." We were given a line/verse and had to guess whether it was from a Taylor Swift song or from the biblical book of Lamentations. This was shockingly hard, even for us biblically literate people! So extremely clever and fun.

Those first two games would be easy for anyone to play with a group of friends/family/whoever. The last one takes more preparation but is also a lot of fun. My only regret is that Taylor only has the free account so we could only gather for 45 minutes so the fun ended too soon!

I truly hope that Zoom stays in everyone's repertoire going forward, even when life gets back to something resembling normal. I truly love being able to gather with friends, family, and colleagues back home even though we have moved abroad!

Have you been on Zoom lately? Do you love it or loathe it? Do you want it to continue when the pandemic is over or are you eager to get back with people in person? Some combination of the two? Let's chat!

P.S. This is my favorite Zoom cartoon that was making the rounds just after Easter. Enjoy! 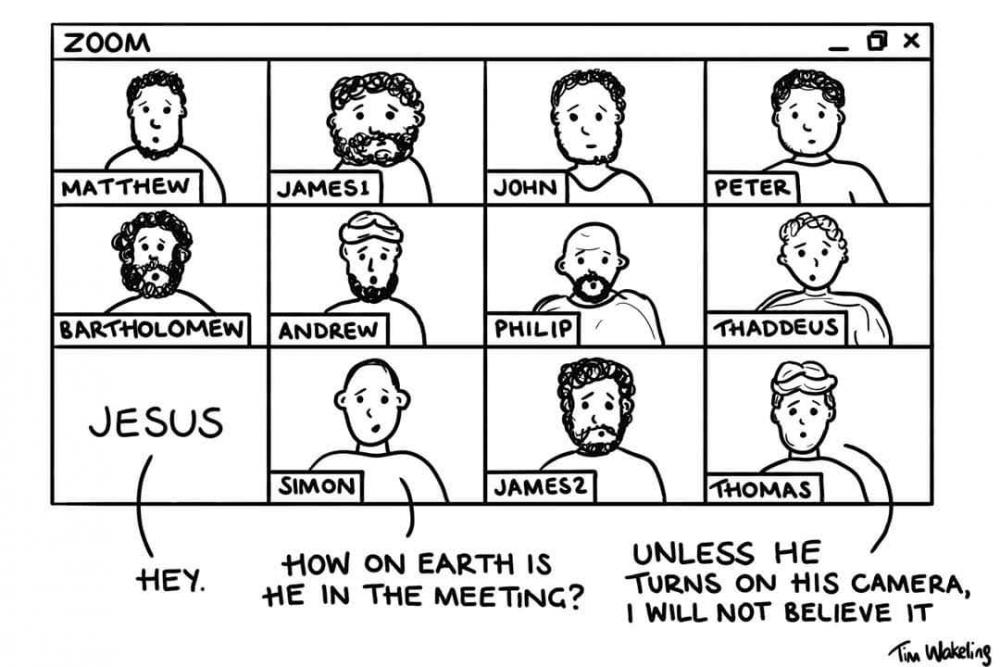