A Decade of Divinity

Precisely ten years ago yesterday, I graduated from the Candler School of Theology at Emory University with my Master of Divinity degree. I know I have pictures of that day somewhere...but my digital picture organizing method was pretty rubbish up until about 2013 (aka when Google photos took over all the work for me.) Someday I hope to find those photos again (I'm pretty sure they are on a flash drive buried somewhere in my parent's basement) but until then, you can enjoy this photo that was taken just a month or two before graduation. 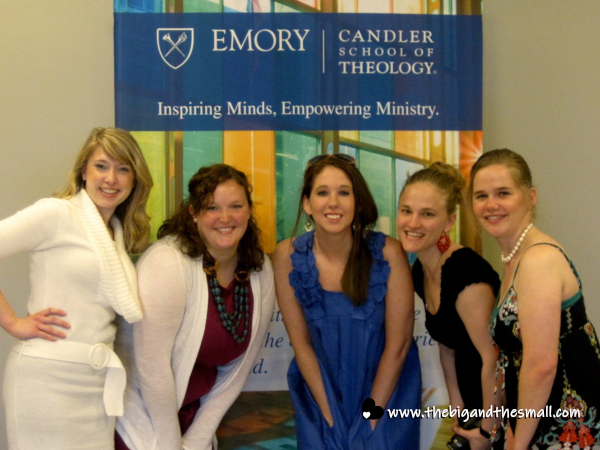 If you had told me on that day ten years ago, that in a decade I would be living in London and serving at a Methodist Church in Notting Hill (incidentally, the only part of London I was familiar with thanks to one of my favorite movies) I would have thought you were crazy. If you had told me that the world would also be in the midst of a global pandemic and most of society would be shut down and people living under quarantine, I would have known that you were crazy.

And yet, ten years after graduation, here I am. Living in London, under quarantine, serving Notting Hill Methodist Church. It's crazy where life takes us, isn't it?

Sometimes it feels, like my time at Candler was just a few years ago. But when I sit down and actually think about all that has happened and changed in the last decade, it's hard to believe that it's only been 10 years!

Since graduation I have:

- Served a one-year residency as a hospital chaplain (while living with my parents again at 23/24 years old!)
- Moved into the first (and only) place I lived alone - the parsonage of the first church I served
- Served as an associate pastor at First UMC in Ames for four years
- While there, met and married my husband, Joel
- Started dreaming (again, I first dreamed of this in college) of moving and living abroad
- Moved to Fort Dodge, IA instead, and bought a home!
- Served two years as a chaplain at a retirement community
- Quit my job in ministry and ran my own at-home clothing business
- Served 7 months as an interim minister at a UMC in the small town of Renwick
- Sold most of what we owned and left everything behind to travel the world for a year and a half
- Decided to apply to the Methodist Church in Britain, went through the interview process, then the work visa process!
- Finally made our dream of living abroad come true by beginning service with the Methodist Church in Britain
- Paid off my student loans! (I graduated with $45,000 in student loan debt.)

Okay, to be fair that last one won't be true until the end of this year. But as long as I stay on track with scheduled payments my student loans are set to be all done come December! I am so freaking excited about that.

In all these years I have learned a lot about myself and about how to be a minister. Candler taught me plenty, but real-life experience has taught me even more. Of course, now I have the added challenges of ministering in a new-to-me culture (as similar as the UK and the US are there are significant differences!) and in the midst of a global pandemic - they certainly didn't teach any classes on this in seminary!

So where were you 10 years ago? Does your life today look like what you expected or vastly different than you expected! I'd love to hear it!