Back in the USA!

We are officially back on home turf!

Our travel back was really quite smooth and easy, which bodes well for coming back for visits when we are finally actually living abroad. We started the day early with Vince driving us to the airport at 5:30 in the morning. We arrived at Heathrow at 6:30 for our 8:50 flight, but as we checked in the agent asked if we would want to move up to the 7:30 flight instead. We figured, sure, why not! We only had our carry-ons so we didn't have to worry about any luggage making it onto the plane, so he printed us new tickets, we zipped through security, and before we knew it we were on our way to Dublin!

The flight to Dublin was short and sweet and once we were in the airport we headed to the gate for our flight to Chicago. For flights to the USA, the Dublin airport has a USA "preclearance" area which meant that we went through US Customs & Border Control right there! The agent we talked to asked us where we had been since the last time we were in the US - when I started listing them all (England, Italy, Bulgaria, Thailand, Australia, Bali, and Wales) he was a little surprised. Then he called over another agent to talk to us because she has been wanting to go to Bali and wanted to know what we thought of it! (We told her it was hot and crowded and we liked Thailand better.) After some conversation about our travels and giving him a business card for the blog he waved us on through. And that was it! When we landed in Chicago it was like landing from an in-country flight - we just got off the plane and were good to go.

Before we left Dublin, however, we had about a 2.5 hour layover. I also saw something I've never seen before - beer on tap at the gate! Guinness, of course! My mom made me take a picture for my dad so I figured I'd share that here, too. 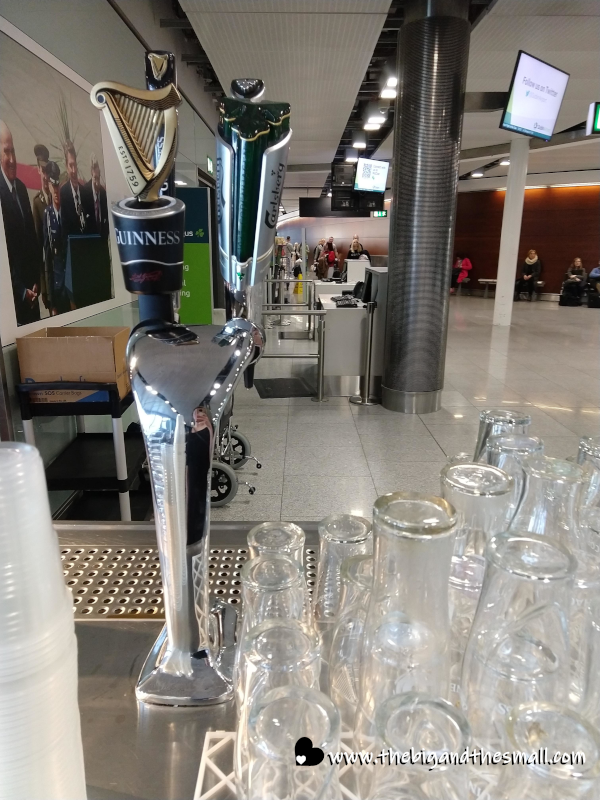 We flew on a new-to-us airline - AerLingus which is based in Ireland and a subsidiary of some sort of British Airways. Our experience with them was excellent! The food was delicious (chicken and mushroom ravioli in a cream sauce, yum) and the service was friendly. The in-flight entertainment was great as well, I almost didn't want to sleep as there were so many movies I wanted to see! We did get a nap in for a couple of hours, but we also managed to watch the new Charlie's Angels, Maleficent: Mistress of Evil, and The Kitchen (a movie about mob wives that was surprisingly good.) We'll be flying back with them on March 17th (if all goes well with the work visa!) and I'm oddly excited to fly with an Irish airline (complete with Shamrocks!) on St. Patrick's Day. 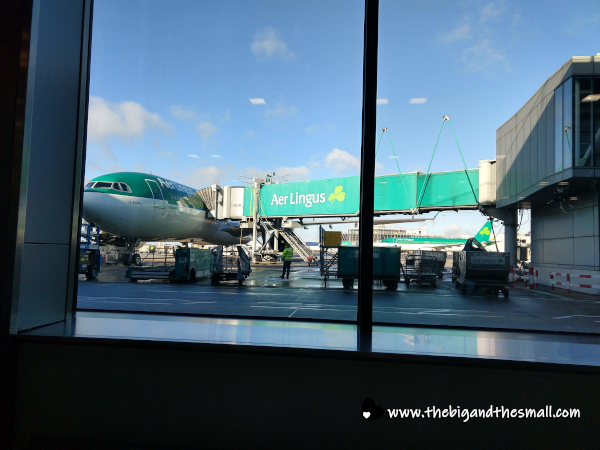 When we arrived in Chicago Thursday afternoon Joel's dad and stepmom picked us up and we spent the night with them. The next day we drove to Des Moines for a funeral (Joel's cousin's husband passed away after a battle with cancer). Then I went to my parent's house in Des Moines and Joel has been staying with his brother in Ames. We both have lots of family and friends we want to see while we are back - we might as well make the best of having to be here!

I'm also working on the big project of organizing all of the stuff we still own. We got rid of a lot...but boy it still seems like we have a lot, too! Next week some moving companies will be coming to give estimates on how much it will cost to move everything to Wales.

As of about 10 minutes ago, I got official word from our immigration lawyer that our applications have been submitted and we have to attend a biometrics appointment in Des Moines next Monday (fingerprints, photographs, etc.) Once that is done we'll submit everything to the UK government and since the church is paying for an expedited application they'll have 5 business days to give us an answer.

Eek! It's all starting to feel really real!

Wish us luck, and you know I'll keep you posted on how it all turns out!