On the last day that Steve was here to visit us, Vince and Joan offered to take us on an excursion to a nearby town. Several places were debated as options but we quickly landed on the town of Lavenham - Joan wanted to go, it ticked off a place on Steve's list of places to see, and a medieval wool town sounded pretty cool to me! Joel ended up staying home as it would have been pretty cramped in the back seat of the car with all three of us, and his introverted self just needed a day alone. 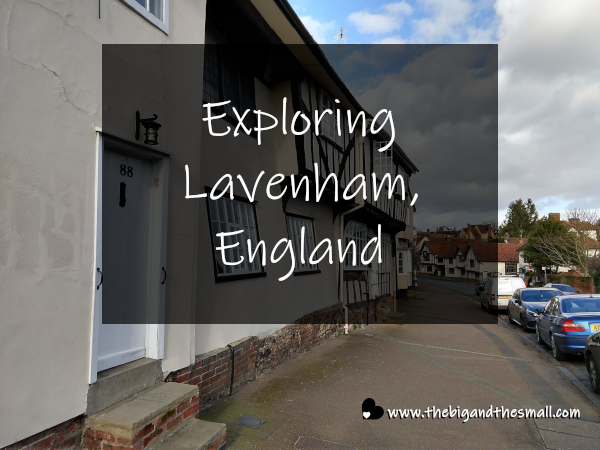 We set off around 10:30 and arrived in town just before noon. Driving down the main street made it clear just how adorable this town was going to be - almost all of the buildings are super wonky! Like, picture The Burrow (the Weasley's house) from the Harry Potter movies...do you have that in mind? How it's all lopsided and leaning and clearly held together by magic? Well, that's half the buildings in this town! Many of them date back to medieval times and are still functioning as private homes and businesses, reveling in their wonkiness. (Also a fun fact: the Harry Potter movies actually filmed in this town! Remember when Harry and Hermione returned to where Harry was born in movie 7? That was filmed in Lavenham!) 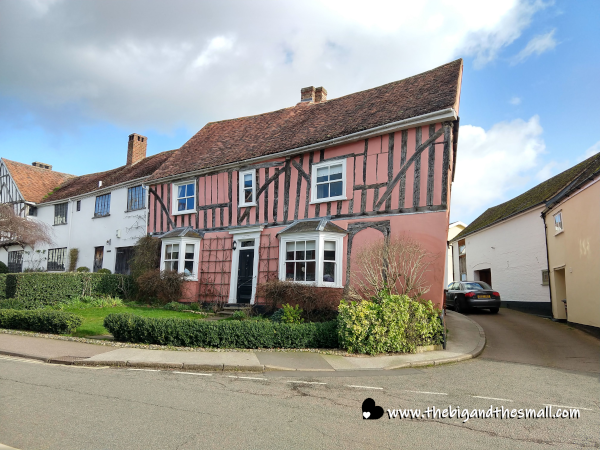 We spent the first hour or so just wandering around the streets marveling at all of the buildings and trying to get pictures that accurately captured the wonk. (That was surprisingly hard to do!) The weather was absolutely gorgeous - bright and sunny - though a bit windy. As long as we were properly bundled up the cold wasn't too bad. From where we parked to the old center of town was perhaps only a quarter of a mile but it took us a long time to get there as we just couldn't stop standing and staring at things along the way. Luckily this town is used to being a destination for ogling tourists so especially on a Saturday we didn't stand out too much.

A majority of the rest of our time was spent at the Lavenham Guildhall, which is set up both as a community space (locals can rent it out for gatherings) and a museum about the history of the town. The building itself dates back almost 500 years and you can really feel the history in the space. The museum portion is run by the National Trust, of which Vince, Joan and Steve are members, and Steve was able to get me in on his pass so we all got in for free! We are definitely planning to join the National Trust once we are settled (a set yearly membership gets you into hundreds of historical sites for free.) 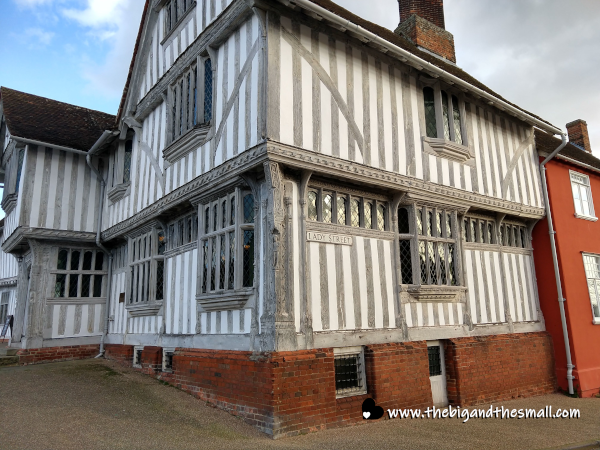 The museum was unique in that it was not just your typical "wander around and read plaques" kind of place. Rather, they have volunteers who act as storytellers. In several rooms when we entered we were greeted by someone who would then share stories about the history of the town. Lavenham was the third richest town in all of England, back when the work of creating blue cotton fabric was highly sought after (only nobility could wear blue, not mere peasants.) When their work was in high demand, the town thrived. However, when a new wool processing method was brought to England (that used heat) and the town failed to change with the times, prosperity soon passed them by. The town then became very poor and this actually why so many of the medieval buildings still stand today. When much of the rest of the world moved on from medieval building styles, towns often tore down their old buildings to make way for new. Lavenham, at the time, could not afford to do so. By the time the town was prosperous enough again to think about doing this (well into the 1800's!) one bright townsperson foresaw the tourist attraction that the old buildings could be, and began restoring them. Thus we have one of the best-preserved medieval towns in the world. 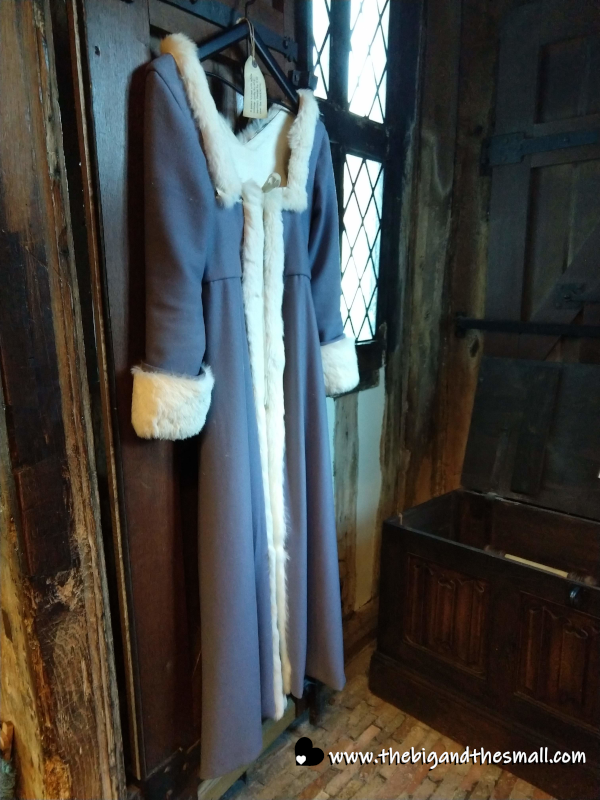 Though the building is still referred to as the "guildhall" it was really only used as such for the first 18 years of its now long history. It has also served as a jail, as a poorhouse, and various other things over the years. The upstairs rooms of the guildhall really focused on its history as a jail and there were some very sad stories. The most heartbreaking was the story of Anne Baker, a young girl who was jailed at the age of eight for running away from a union workhouse (where paupers were "employed.") In 1783 she was sentenced to three months but once released she ran away again. She was then sentenced to six months and "punished severely." Only three months after being released she ran away again and this time she was ordered to be transported to Australia in 1785. She was officially judged to be an "Incorrigible Rogue." She was taken to Australia aboard the Neptune, a ship that has become infamous for its poor treatment of the people aboard and the large number of people who died in transport. Anne survived the 159-day trip and served out the remaining two years of her sentence in Australia. In 1792 (at age 17) she married John Boxley, a fellow convict who had been sent to Australia for highway robbery. Together they had three children, two of whom survived into adulthood. They lived and worked on a hog farm until Anne died at age 29 in 1804. This history has been pieced together by her descendants who still live in Australia today.

After thoroughly exploring the guildhall and listening to the stories contained within, we returned to the outside world quite hungry. We ventured to Munnings Tea Room at the Crooked House for a late lunch. I didn't get a good picture of the building straight on, but it was indeed quite crooked! 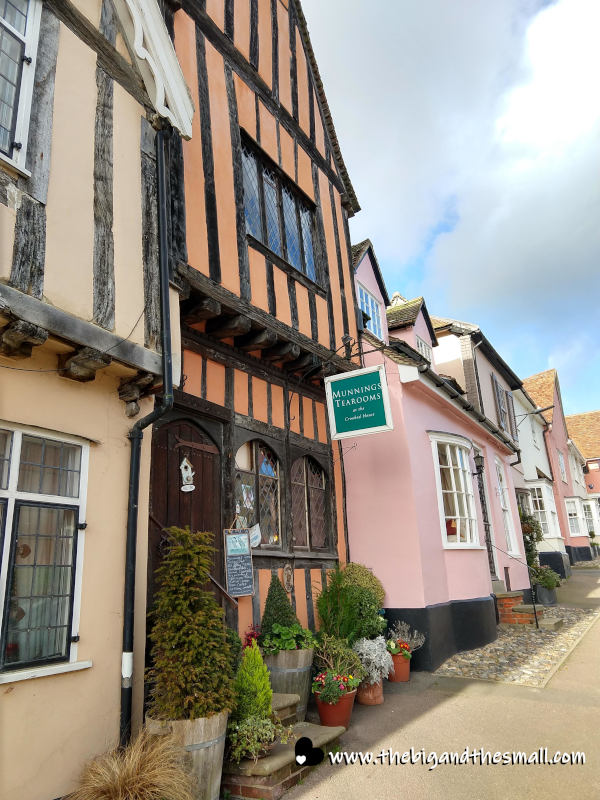 The inside was crowded and cozy in the best possible way. We got the last open table and settled in for some tea while we waited for our food. After the cold and wind outside there is nothing more comforting than a hot cup of tea with friends! 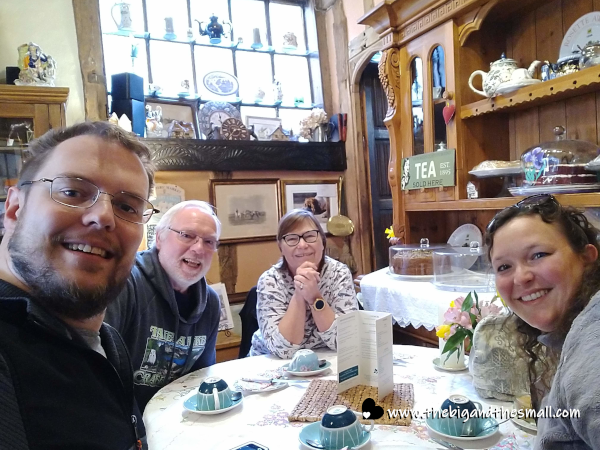 I ordered the special of the day which was mushroom and brie soup with a cheese scone. I was a bit worried it wouldn't be enough food...but the bowl was big and the scone large and it ended up being quite filling. The scone was also served with butter, onion jam (did not care for) and a large wedge of cheddar cheese (we all know how I feel about cheese!) It was absolutely delicious and if I ever return to Lavenham I will eat here again! 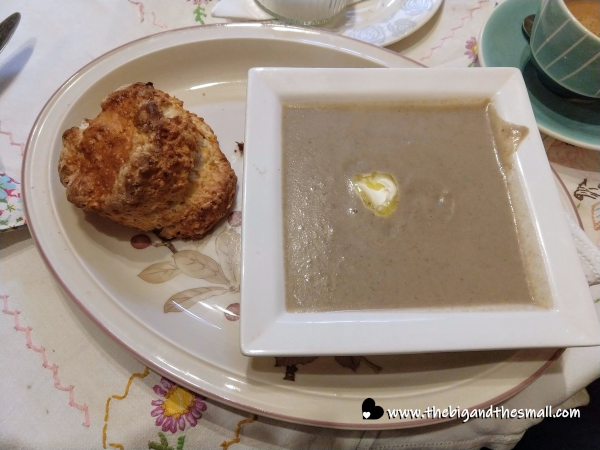 Once we had all eaten our fill we headed back to the car and it was time to head home. We had a wonderful day in Lavenham and I would recommend it as a good day trip if you are ever in the area!