The Maze at Milton Keynes

I mentioned the other day that Steve took it as a personal challenge to show Joel and me a town in the UK that we would not like. He was absolutely convinced that the nearby Milton Keynes would fit the bill and get the unfortunate distinction of being the first place in the UK we would not want to live. So on Wednesday of last week, we took a little road trip (about 1.5 hours each way) to check it out! 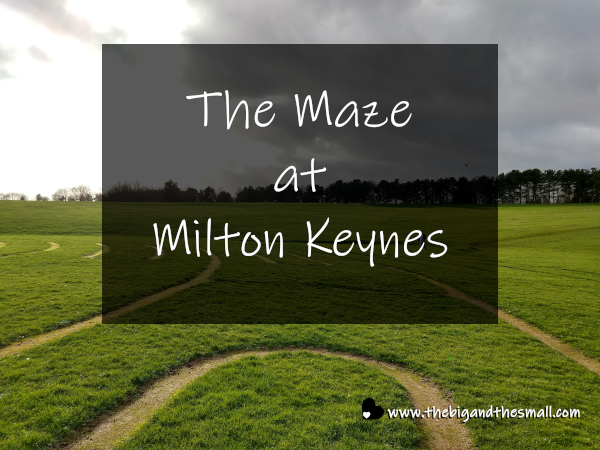 As usual when we travel with Steve, he researched the area and picked things for us to do without telling us about them. We love this surprise aspect of traveling with him! So when we first pulled into a random parking lot we did not know what we were getting into. We had arrived at Willen Lake park, which is not only a beautiful green space with wide trails surrounding the lake, but a park with several other surprises up its sleeve as well. I'll share more about everything else next week, but first I want to talk about the maze. We found the maze by climbing up a small hill and when we reached the crest we were greeted with this view. 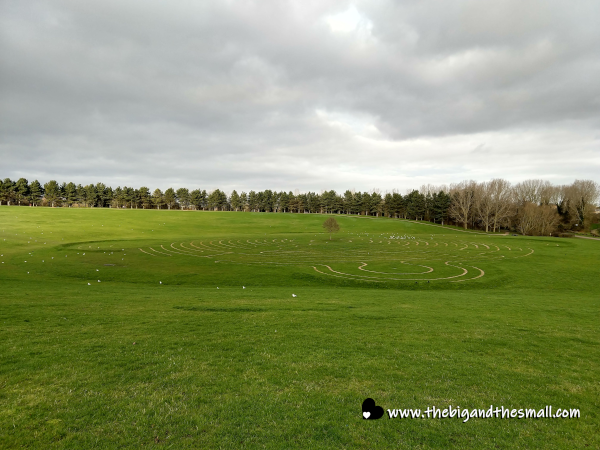 At first, I thought it was a labyrinth. And, to be fair, that is what the park calls it. But it is not, in fact, a labyrinth, but a maze. Both are awesome things to find in a park, but they serve different purposes. A labyrinth can look, at first glance, like a maze - a winding path that leads to the middle. But actually, a labyrinth only has one way to the center and one way out. You can walk a labyrinth without making any decisions or conscious choices and you will wind up at the center - which is why it is used in spiritual practices. A maze, on the other hand, does require you to make choices and you can make the wrong ones that will cause you to end up further from your goal. 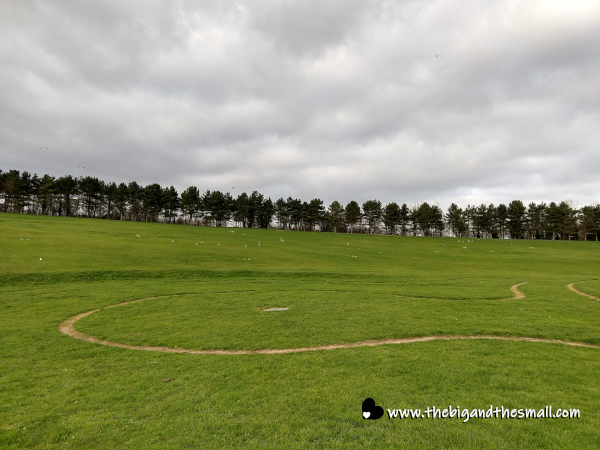 I was a bit disappointed to realize it was not actually a labyrinth, as I had been hoping to pray as I walked. However, I quickly warmed to the challenge of the maze and found myself enjoying the extra work it took more than I thought I would. At any point I could have easily ignored the lines and walked to the center of the maze (as a friend so helpfully pointed out when I posted a picture on social media.) But there came a point when I had invested so much time and energy into solving the maze that I absolutely had to figure it out for real, no cheating.

I was constantly looking ahead, trying to determine where my current path was leading me. At one point it took me within one row of the center, but it became clear that I still had a much longer journey ahead of me. From there I was able to trace from the ending back to where I was, so I could finally discern the path ahead. It was long, winding back and forth on itself several times, and once I knew I was on the right path I was so eager to get to the end I almost ran! (If you know me, you know that's a big deal. I don't run.) 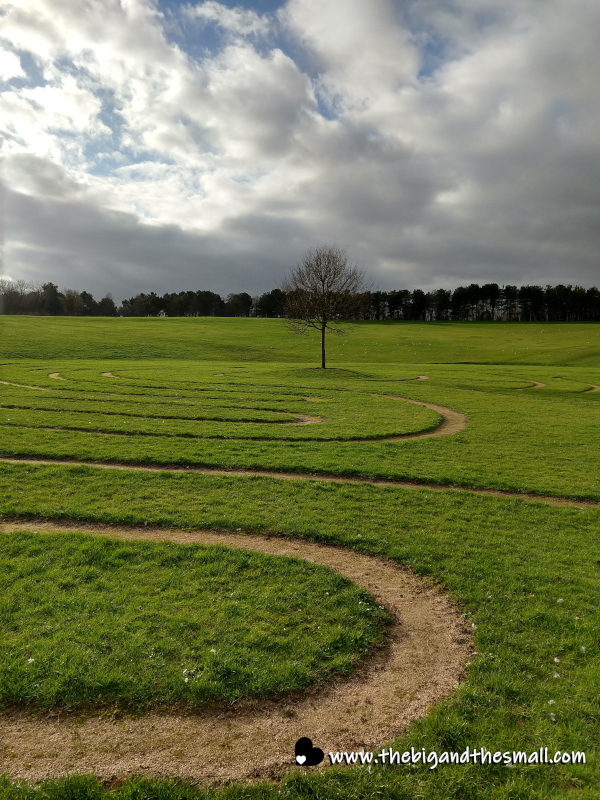 When I finally made it to the center I was exhausted and elated at the same time. (Later we realized we walked over a mile from start to finish - thus the tired!) It was so completely satisfying to both feel like I solved a mental puzzle and completed a physical challenge all in one go. If we lived here I would come to walk this at least once a month. So far Steve was losing on making us not like this town! 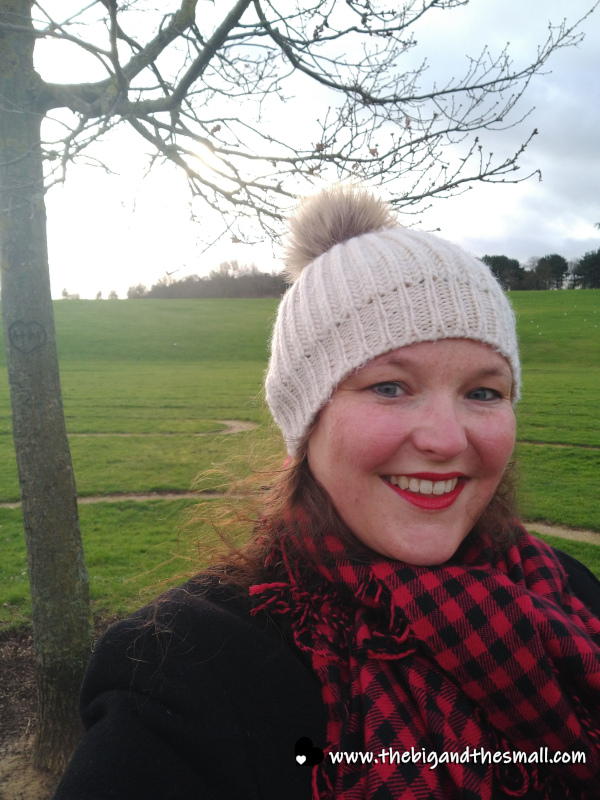 Joel and Steve had started a few minutes behind me (not as eager to take on the challenge at first as I was) and I had fun watching them follow the winding path, fight through some confusion, and eventually figure it out just as I had. 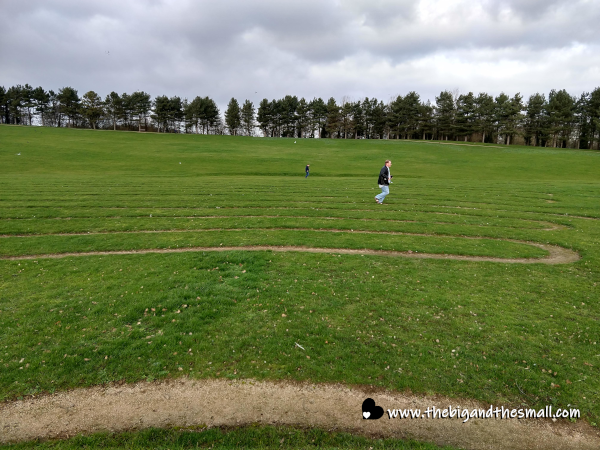 I decided that the maze was a pretty good metaphor for life. There were times when it seemed like the path to follow was obvious, and other times that the choice of which way to go was harder to make. There were times when it seemed like I was almost at my goal, just to realize that the next turn took me even further away than where I had started. That is how I feel about our process of moving to the UK right now - I get an email that makes it seem like everything will be imminently sorted, then another one that makes it feel like it might never happen. (More paperwork? More waiting? Ugh!) 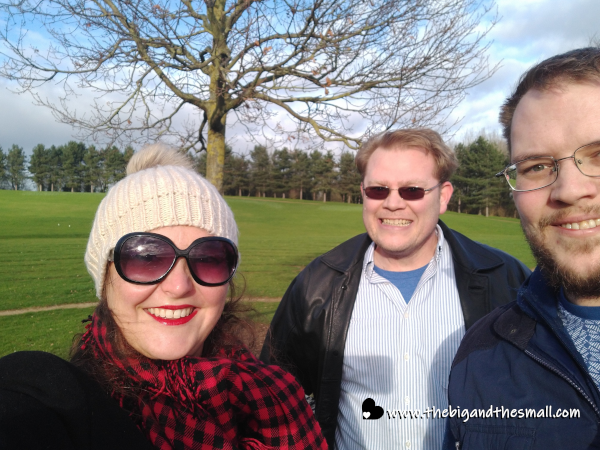 I need to trust that just like this maze at Milton Keynes, I will be able to sort out the maze that is moving to and beginning work in a new country. It is not easy. It is not always fun. It is often incredibly frustrating and achingly slow. But in the end, when I'm standing at that oak tree that is my new life in the UK, it will all be worth it.