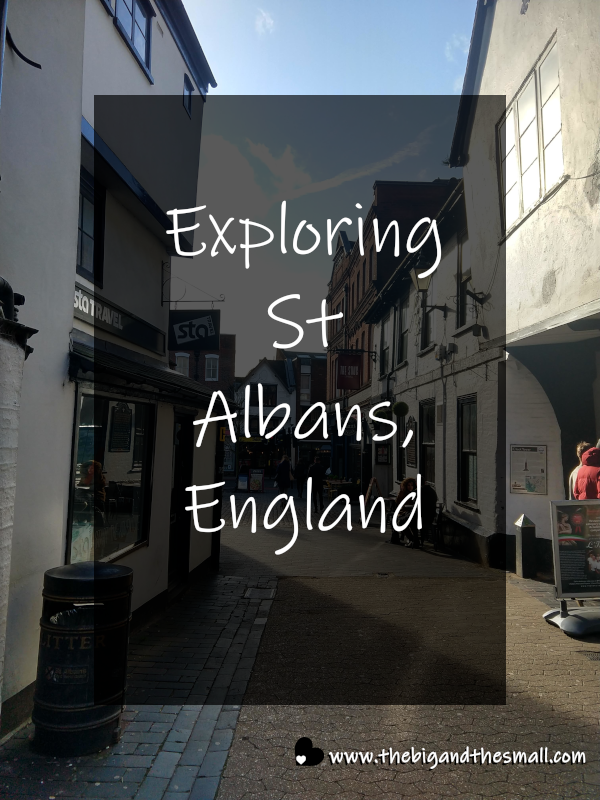 One of the first notable things we came across was this gorgeous clocktower in the center of town. It was surrounded by a pedestrian square where people can come sit and relax and enjoy time outside. Though, not on the day we were there as it was chilly and very blustery. The actual first thing we found was the door in the side of the clocktower - a small door (Joel and Steve in the picture for scale) with a sign that warned us to "Commit no Nuisance." Joel was disappointed he could not be a nuisance. 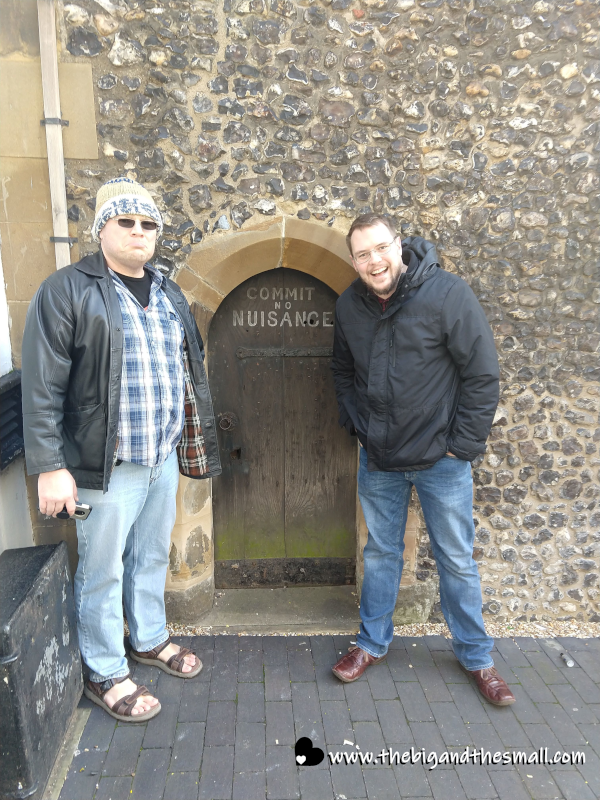 When we rounded the corner from that is when we realized the oddly diminutive door was part of the clocktower. A sign informed us that the tower was built between 1403 and 1412. It is a Medieval belfry almost unique in England, containing a large curfew bell which dates back to 1335. The adjacent French Row was occupied by the Duphin's troops in 1216. In the Fleur De Lys Inn King John of France was detained for a time in 1356. As if that wasn't enough history for this small area, another sign informed us that "Near this site stood the Eleanor Cross where the body of Queen Eleanor rested one night on its progress from Harby to Westminster 13 December 1290." Whew. Talk about ancient history. 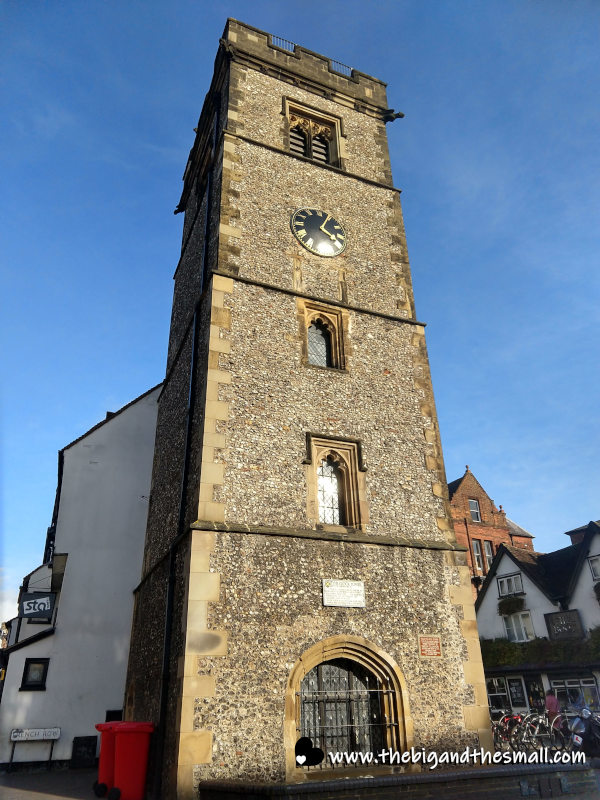 While I find myself fascinated by ancient clock towers and other buildings of historical significance, Joel is always intrigued by hidden alleyways. I'll give him credit that very occasionally we have found something cool by going down an alleyway - a hidden shop or a secret cafe, but often it's just, well, an alley. He and Steve explore Boot Alley and found nothing but rubbish bins while I happily browsed a nearby charity shop. To each their own, I guess. 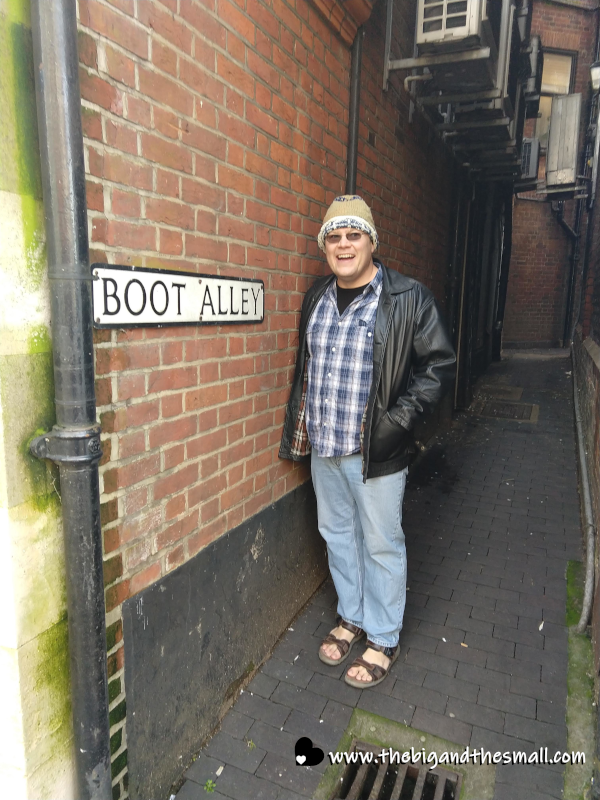 We all enjoyed wandering up and down the main streets of St. Albans. It is one of those picturesque English towns where even the local drugstore somehow manages to look cute and charming tucked into an old building. As we walked Joel and I declared that there has not been yet a single town in the UK that we did not enjoy and that would will be happy living wherever the church sends us. Steve seemed to take that as a personal challenge and declared that the next day he would take us to what he considers one of the ugliest towns in the UK. Lucky us, it's only a 45 minutes drive away! More on that tomorrow...but in the meantime here's what I mean about St. Albans being picturesque. 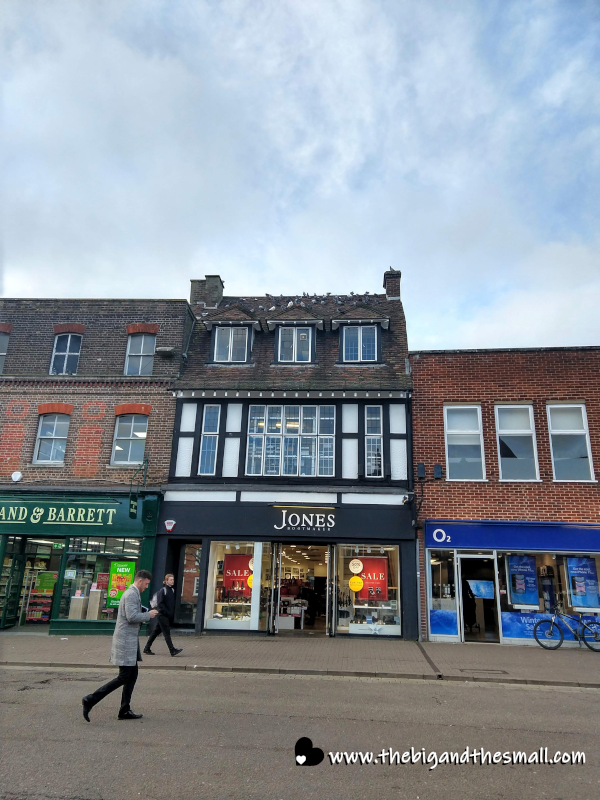 As we continued exploring we stumbled upon a tree that, while not very pretty looking during the winter, had a sign sharing its very interesting history. Here is that information: "This tree has grown from a conker which itself came from one of the last trees left standing after the Battle of Verdun during the First World War. On 21st February 1916, the Germans attacked the mighty fortress of Verdun in eastern France in an attempt to destroy the French Army. The ensuing battles lasted for 303 days. For the French, there was only one access route - a narrow road that become known as "La Voie Sacree" (The Sacred Way) along which all their supplies and reinforcements had to pass. In July of that year, the British launched the Battle of the Somme. One objective of this offensive was to relieve the pressure on the French by forcing Germany to remove troops from Verdun. Finally, on 19th December, perhaps the greatest and longest battle in world history ended, with the Germans having been pushed back to their original positions. Some 300,000 had been killed and a further 400,000 wounded. For France, Verdun is remembered much as the Somme is by the British, symbolising the horrors of war. In November 1920, to bring the Unknown Warrior back from France, the British government could think of no more appropriate ship than HMS Verdun. This Verdun tree was planted here in St. Albans in 1976 to mark the 60th anniversary of the battle." 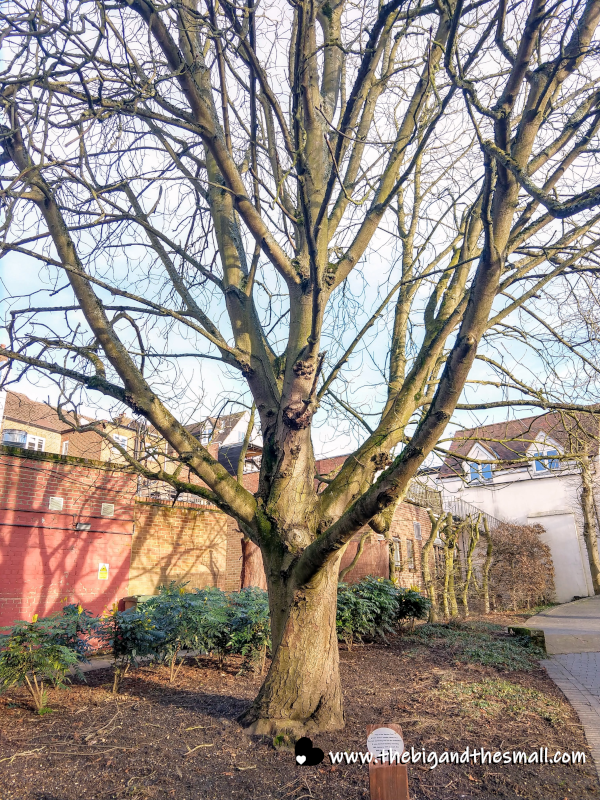 There were several other places we explored that weren't quite as noteworthy, including seeing what was apparently historic almshouses (housing for the poor) and walking too far out of our way to find what turned out to be a completely unremarkable park. (Joel picked up a town map at the Cathedral and when we went to some of the suggested places there were a bit disappointing.) Regardless, we enjoyed our day exploring St. Albans and it is definitely a place I would go to again!