It wouldn't be a trip to Cambridge (at least for church dorks like myself, Joan and Vince) without a visit to at least a couple of churches. We saw the chapel in Vince's old college, ate lunch in a church that has been turned into a restaurant (more on that tomorrow), visited a 1000-year-old church that is still in full operation, and capped off the day with Choral Evensong at King's College Chapel. In this post, I'm going to share all about those last two! 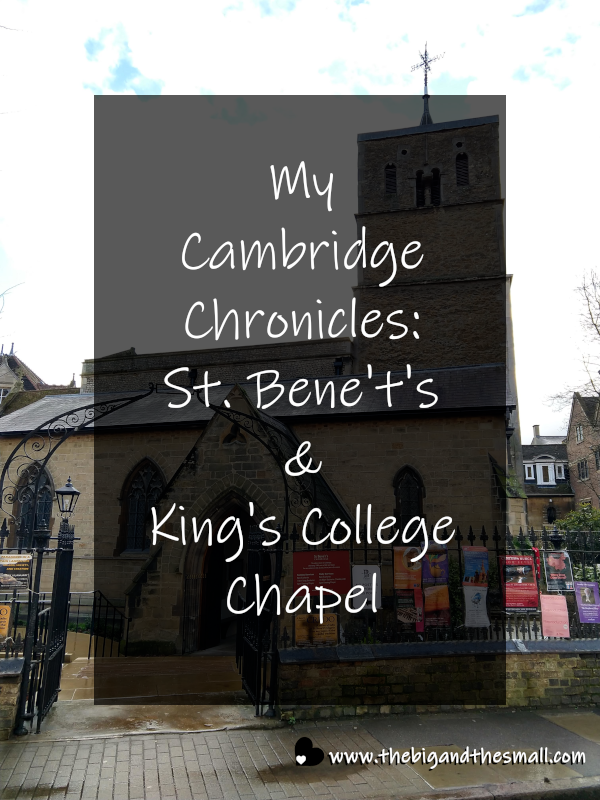 St. Bene'ts Church (short for St. Benedict) sits right across the street from the Eagle Pub. This church is the oldest one in Cambridge, dating back to 1020. It still blows my mind, typing sentences like that. I just can't believe that something built a thousand years ago is not only still standing but still serving the function for which it was built! It is just so incredible to me. The church is filled with arches, ornate woodwork, and stained glass windows. 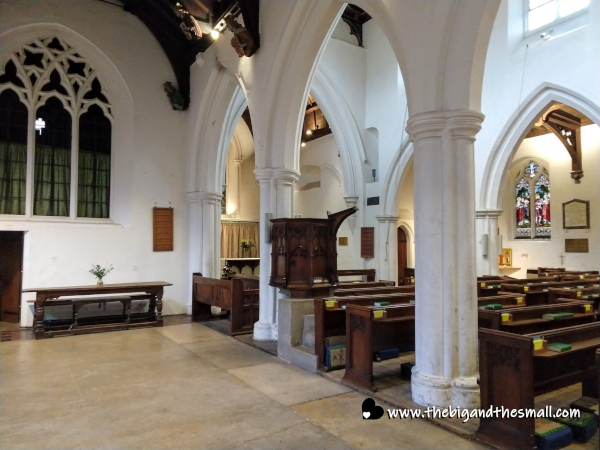 It is believed to have been built by the Saxons which is part of what dates the church back so far. One way they identified this is by looking at how this particular arch in the back of the church was formed. If you look on the sides of the arch you can see that between each big block of stone is a smaller horizontal block. That particular style is iconic of the Saxons, not the Normans who later followed. 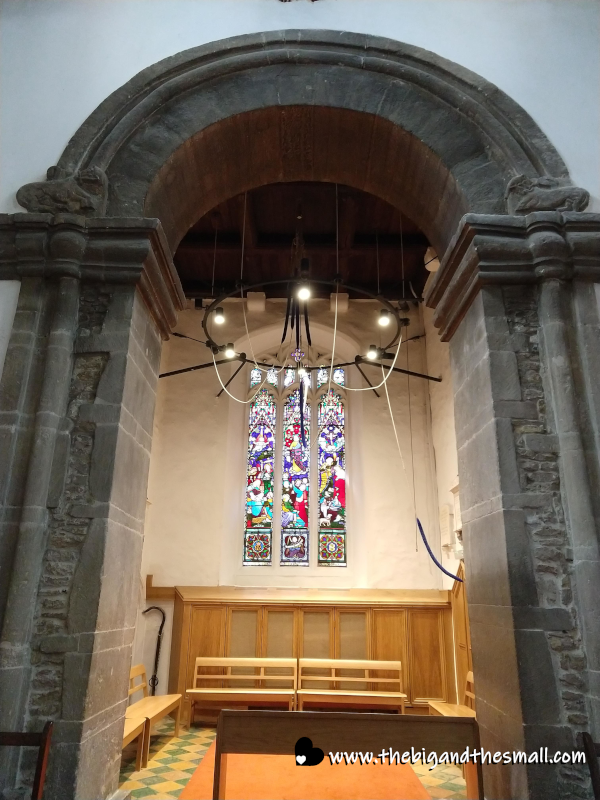 Tucked in the corner of this little alcove is something I never would have noticed or wondered about on my own. However, Vince told me to look for it and told me the story of this metal hook. Apparently, it also dates back centuries, back to when thatched roofs were used on buildings. The hook was kept around just in case the roof caught fire - the hook would then be used to pull the thatch down onto the street where people could then stomp on it or use other methods to put out the fire! I love that this piece of history still sits unobtrusively in the corner, harkening back to another time. 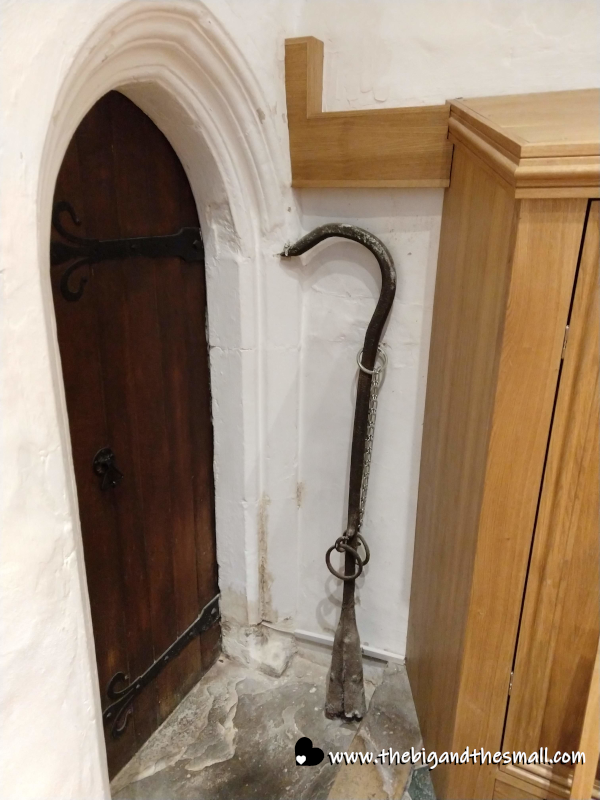 When I approached the altar at St. Bene't's I noticed that it was still decorated for Christmas. Joan told me that many Anglican churches will keep Christmas decorations up through Candlemas, which is on February 2nd. If you are unaware (I was until a short time ago) Candlemas celebrates the presentation of Jesus at the temple, and is widely regarded by those who celebrate it as the true end of the Christmas Season. While the secular world moves on starting on December 26, the Christian world holds Christmas closer a while longer. (Also I'm totally going to use this in the future as the reason for why I keep my Christmas decorations up extra long.)

While near the altar, Joan and I both found ourselves momentarily confused by this inscription on the floor. If you read it, it seems to imply that there was a female vicar who died in 1732. This did not make sense to us because I was pretty sure the Church of England did not start ordaining women until the early 1990's. Joan did a quick Google search and it turns out this inscription is referencing the wife of a vicar, and it is just confusing because when the altar was rebuilt at some point they covered up the first part of the wording. A strange choice! 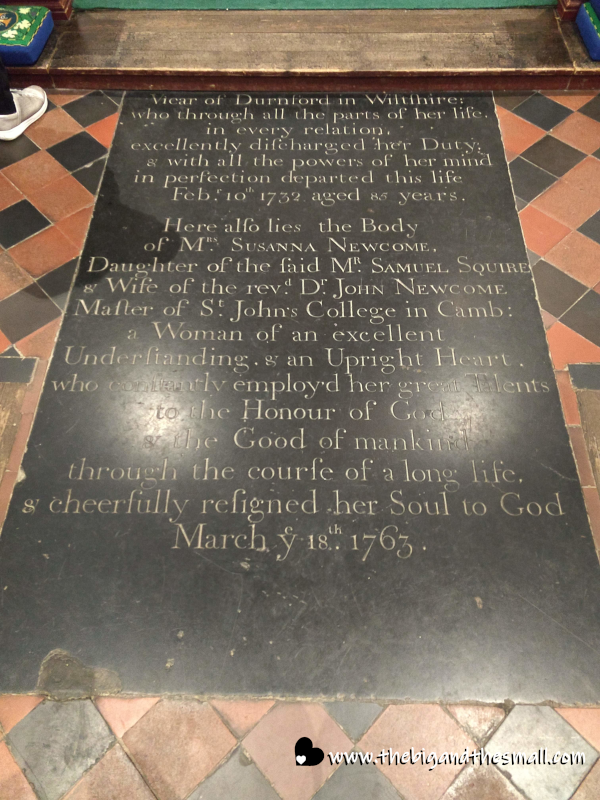 We spent some time in prayer and reflection here before moving on to the museum, which I shared about yesterday. Our final stop of the evening, and one of the main reasons we went to Cambridge, was to attend Choral Evensong at King's College Chapel. This worship service happens every day while school is in session, and while intended for members of the college and their guests, is also open to the public. The chapel itself is absolutely incredible, a real masterpiece of art and architecture. Unfortunately, the ask guests not to take any pictures inside (even after the worship service!) so you'll have to settle for this picture of the outside of the building. 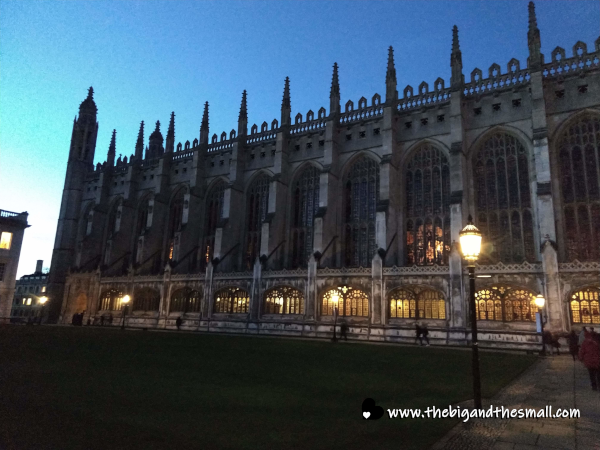 We got in line about 5:10 for the worship service that was to begin at 5:30. Yes, that's right, I said we waited in line to go to church. There are only so many seats available inside near the choir and we wanted to make sure we had good ones. It was getting dark and was freezing cold but it was well worth the wait. At about 5:20 someone came out to tell us about what we were going to experience (and lay down the law about taking pictures.) 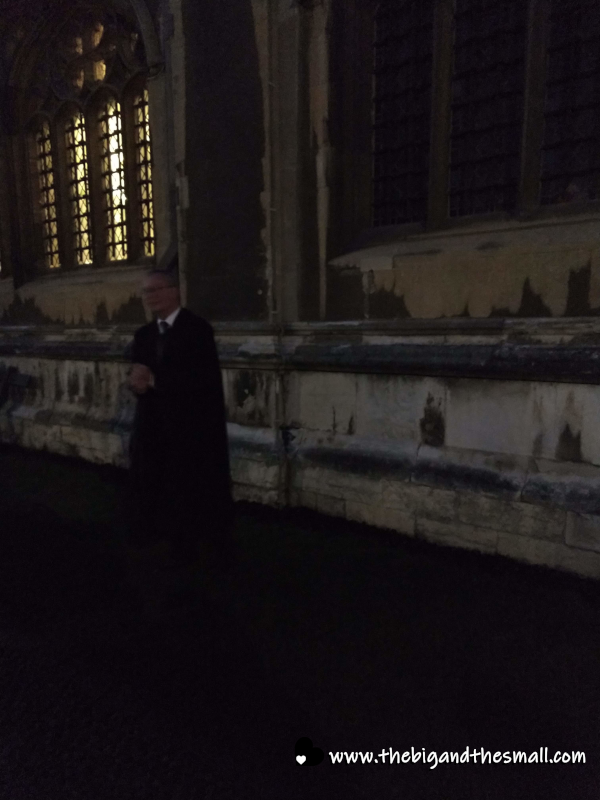 I find it hard to describe the true awe I experienced during Choral Evensong at King's College Chapel. The space was almost entirely lit by candlelight, the choir was all male ranging from boys as young as eight to college students, dressed in white robes. Every aspect of the service was sung, except for the scripture readings, even the prayers. I got chills more times than I could count, and was brought close to tears several times (in a good way!) It was truly a magical experience and I am so grateful to Vince and Joan for taking me.