My Cambridge Chronicles: The Fitzwilliam Museum

If you are just jumping into the Cambridge Chronicles with this post, you can check out the first in the series here. As we continued our exploration of Cambridge, the weather turned from mildly unpleasant (cold and drizzly) to exceedingly unpleasant (cold and pouring down rain.) But never fear, we had planned to visit the Fitzwilliam Museum anyway, and what better way to pass a chilly, rainy afternoon than by wandering the hallowed halls of a museum? (Perhaps by cozying up by a fire with a good book, but I digress. A museum will do for today.) 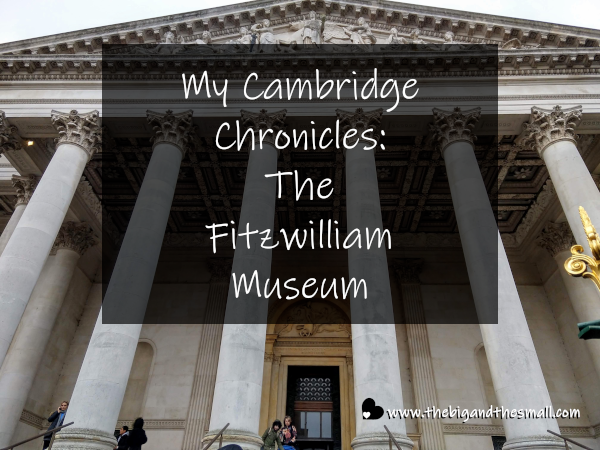 The Fitzwilliam Museum is vast and filled with many treasures - some on permanent display (like the impressionist paintings I'm just now realizing I didn't get to see even though they were high on my list) and some as rotating special showcases (like the two we spent the most time with.) You could easily spend an entire day, perhaps even an entire week, here and not see everything (at least not if you like to read all of the informational plaques like I do!) Like many museums in the UK, it is free to enter and explore, though they do ask kindly for donations as you are able. Even just stepping inside the front door of the museum was breathtaking, as the ceiling is something to behold. 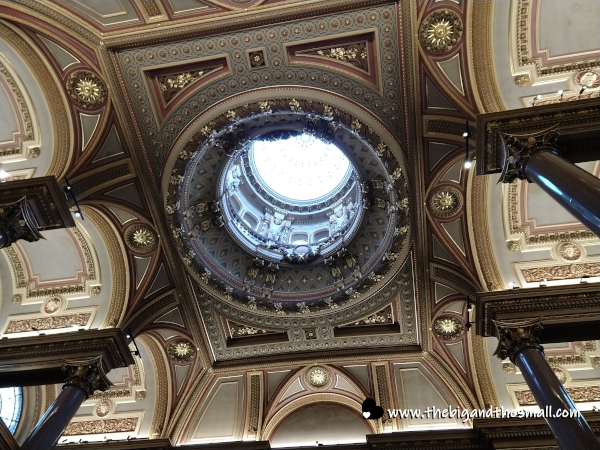 The first exhibit we went to check out was a display of historical fans. This may not sound very interesting at first, but I assure, it was quite interesting to see. The fans came from several private family collections who donated them to the museum so they could be preserved and restored. Fans used to be quite the statement - they could communicate your style and fashion, your place in society, and even your mood of the moment depending on how you displayed it (particularly towards potential suitors.) Women of a certain social status collected fans from all over the world like, well, I tried to think of an equivalent in today's culture. The best we could come up with was maybe a phone (something you carry with you all the time) or perhaps phone cases (show something about your personality/fashion statement) or maybe shoes? I definitely know some women who collect shoes (myself included, guiltily.)

The fans on display are only about 1/5 of the collection the museum owns. The rest are still in the midst of restoration and preservation, so only the ones that had been through the process could be put on display. This first fan caught my eye in part because it reminds me of my favorite scene from the movie White Christmas - except this fan is pink instead of blue! It is dyed ostrich feathers, made circa 1930, and, according to the sign, "clearly intended to make a statement." Statement made! 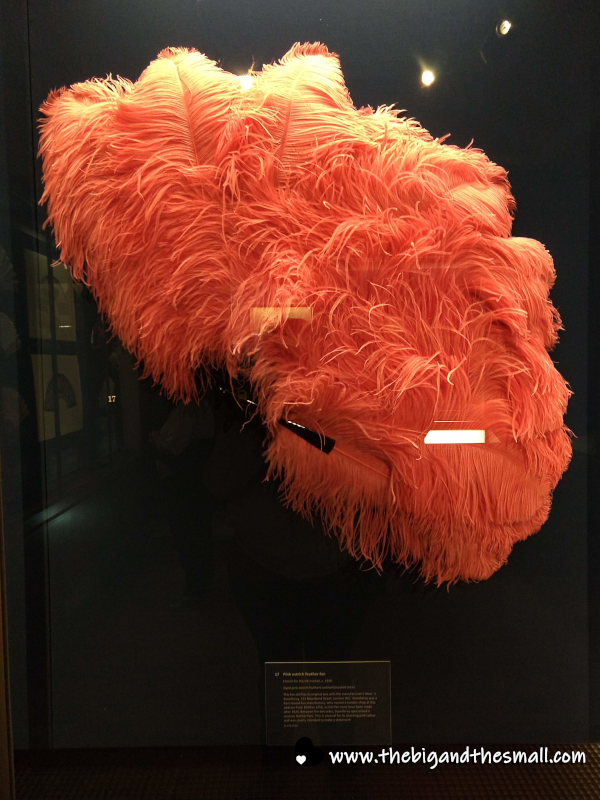 The next fan was on display right next to the pink one and was much smaller in size. It dates back to the 1870's and was popularized in 1871 by the Princess of Wales (later Queen Alexandra) when she was photographed at a society ball holding such a fan (I don't think it was this exact one on display.) The information about the restoration of this fan told me that the hummingbird in the middle is an actual taxidermied hummingbird! (I was previously under the impression it was a fake bird.) That made me like the fan less...and I am mildly horrified at the thought of wandering around a ball fanning myself with the wings of a dead bird. 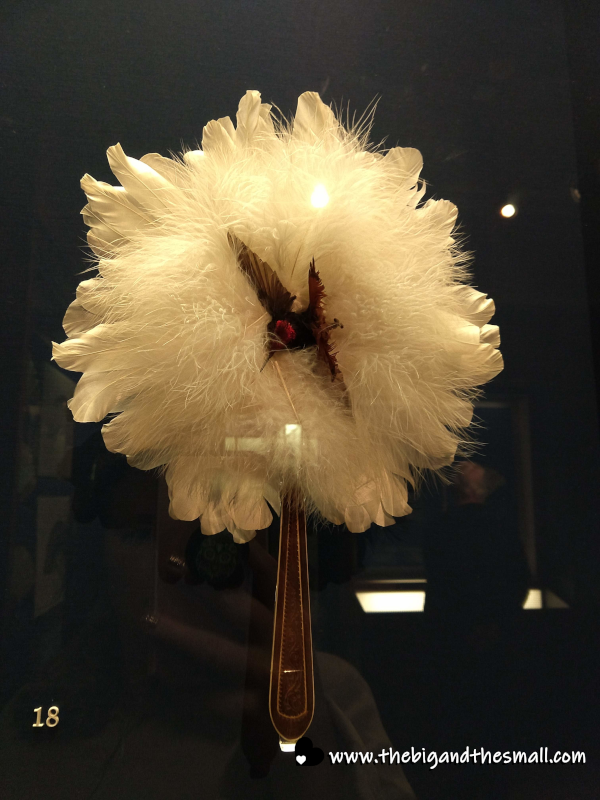 My absolute favorite fan of the whole collection was this fan that served a dual purpose - it was also a dance card! It is quite small, for perspective, the attached pencil is about the size of a golf pencil. This particular one was used on November 27, 1863 at a ball held at Hornby Castle in Lancashire. The female owner used each fan blade to record the name of the particular gentleman with whom she danced. How cool is that? I can just imagine dancing at a society ball, flirting with young men, and penciling them in on my dance card. Why did we ever let things like this go out of fashion!? 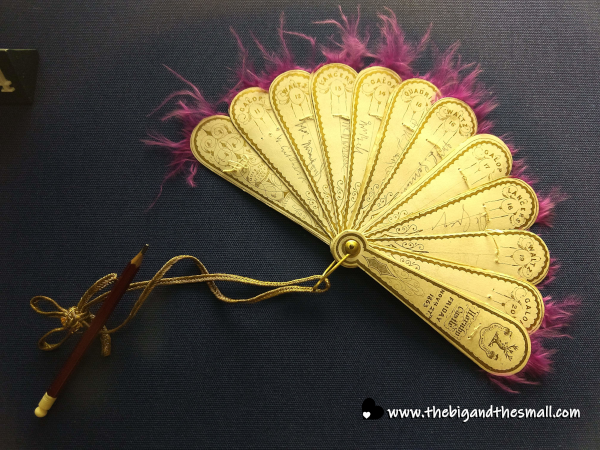 After the fans, it was time to go check out another special display at the museum right now - "Feast and Fast: The Art of Food in Europe 1500-1800." This collection will be on display through the end of April this year. It is signified on the front lawn of the Fitzwilliam by this giant golden pineapple statue. It's so strangely trendy (pineapples and hot pink are popular right now) and yet points to a museum display about the past - I love it. 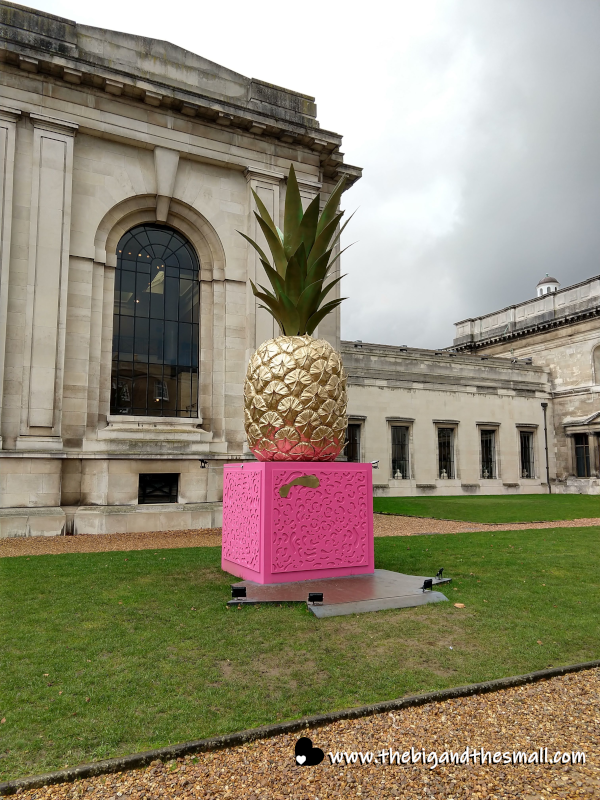 Inside, the collection explores everything about food (and lack of it) from that particular time period. There are elaborate displays recreating wedding feasts and other banquets, actual tools used to make food, and ancient cookbooks on display. This first table is a recreation of a Baroque feast from the 1600's. The description called it "flamboyant" and they are not wrong. The meal served was bird pies - not dissimilar to a chicken pot pie we might eat today. The difference was, they took the discarded parts of the bird and dressed them up (even to the point of adding gold paint) to adorn the top of the pie. I'm pretty sure a buffet spread like this would put me off my appetite, but then, I'm not a person of elite status from the 1600's. It was cool then. Also, they used fancier birds than chicken - here you sea peacock, pheasant, and yes, even swan.

From feast to fast, this next piece is the title page to a sermon that was preached to Parliament in 1666. At the time, London was plagued by, well, the bubonic plague. When the disease began raving in the spring of 1665, a Royal proclamation declared that a day of fasting be held on July 12, 1665 and on the first Wednesday of every month thereafter. This "fast-sermon" was delivered to the members of parliament on the official fasting day in October 1666, to encourage them in their good works and continued faithfulness. I never knew that fasting was a part of the response to the plague - how fascinating! I wish the content of the sermon had been on display as well - I would love to know what it said! 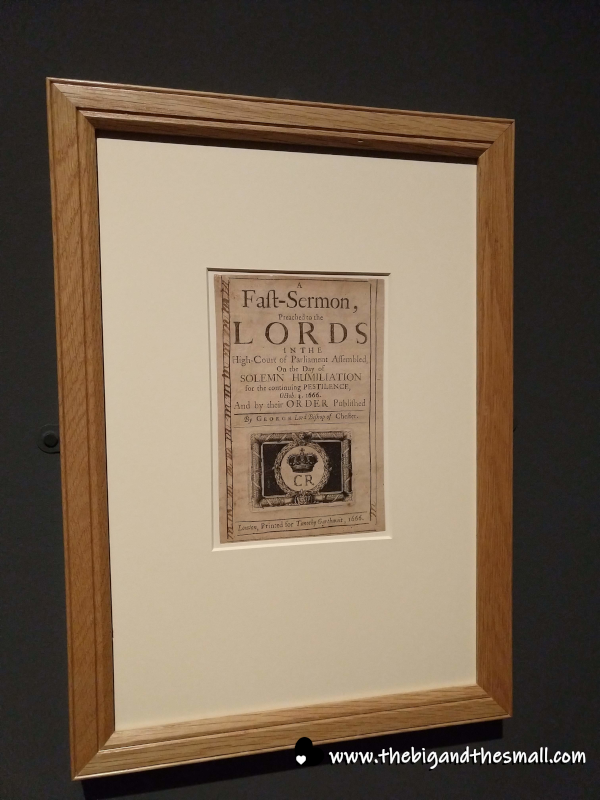 There were so many interesting things on display here, I wish I could share them all. Alas, I didn't take pictures of absolutely everything. The last rooms explored many still life paintings by artists throughout the years - all featuring food in some way - from baskets of fresh fruit to freshly killed rabbits. At the very end, they had an interactive display set up where they encourage visitors to sit and attempt to draw a still life of their own! I have zero talent as an artist so I skipped that part, but I was captured by one simple, small, still-life painting that featured my absolute favorite vegetable of all time - the humble asparagus. I would totally love a print of this in my kitchen someday. 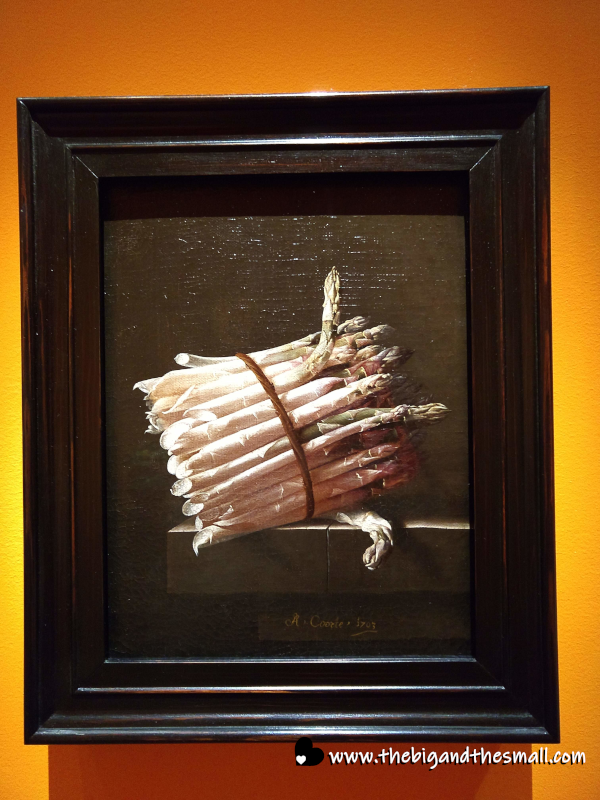 If you find yourself in Cambridge sometime in the next few months I encourage you to check out both of these special displays before they are gone! If you are there at a later date you should check out the Fitzwilliam anyway - the permanent displays are also amazing and I'm sure whatever future temporary displays they bring it will also be incredible! Make sure you set aside enough time to thoroughly explore.