Last week our current hosts offered to take us on an excursion to somewhere nearby. Several options were suggested, but in the end, I chose Cambridge for two reasons: 1. Vince went to school there so I figured it would be more fun to see the place through the eyes of a local rather than go on our own someday. 2. Uh, the Duke and Duchess of Cambridge! Spoiler alert: I did not get to meet William or Kate. Boo. (But also, duh, haha.) We did, however, manage to pack a lot into one day, so almost this whole week is going to be about my day in Cambridge! 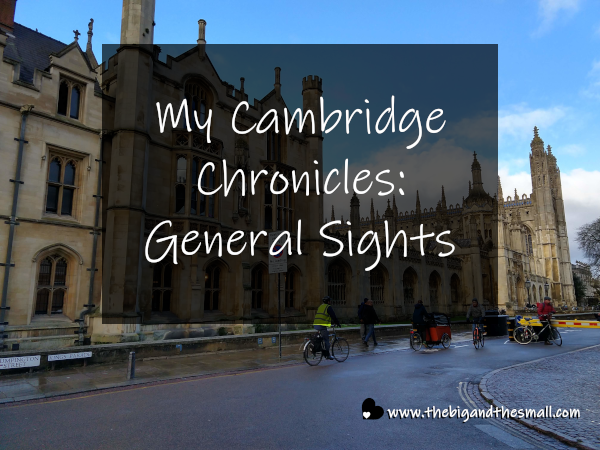 We drove for about 45 minutes to get to a car park just outside of Cambridge. There we could park for free and take a bus into the city for only £3 to get there and back. Not bad! The town is exceedingly walkable, once there we could get to everything we wanted to see very easily. The weather wasn't quite as good as we had hoped it would be - it rained off and on all day - but hey, it's England, what do you expect!? Also, I don't mind the rain so much. (Though I'll mind it even less when I finally get myself a proper raincoat and some rain boots.)

The architecture in Cambridge is stunning, with many buildings looking like they could easily be castles. Everywhere you look there is some small detail that is gorgeous, intriguing or filled with some kind of history. One of the first items to catch my eye was this completely fascinating clock. The picture does not do it justice, as I couldn't get a good one without the glare of the glass. But in person it was stunning, and to be honest, I didn't even realize it was a clock until Vince told me! You have to know how it works in order to tell the time and well, I don't know how it works. But I do know it is super awesome to look at (and apparently cost upwards of a million pounds!) 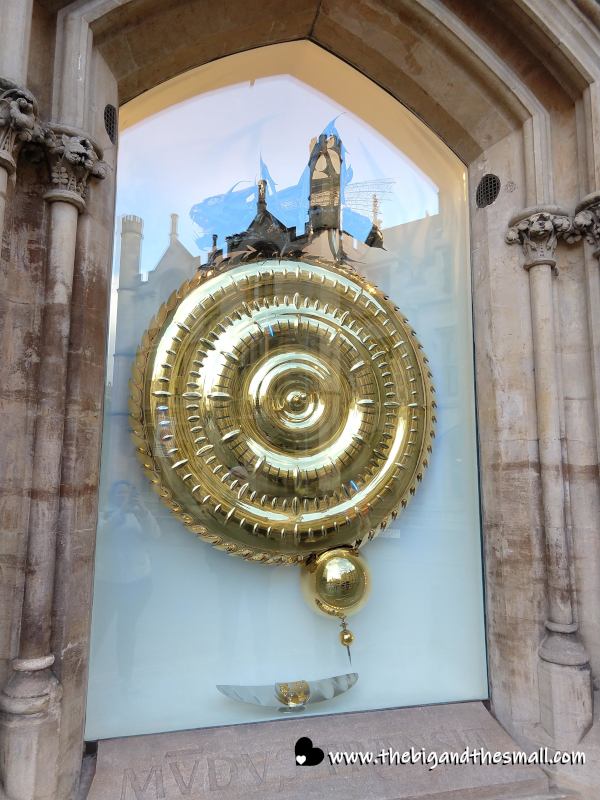 Our first official stop was at a place Vince had told me several stories about already. The Eagle is a pub in Cambridge that has been around since 1525. That is not a typo. Since 1525! (The history is one of the many things I just love about England in general.) As you can imagine, a lot has happened in this place over the centuries, though the two things we are most interested in today are relatively recent in the grand scheme of things. 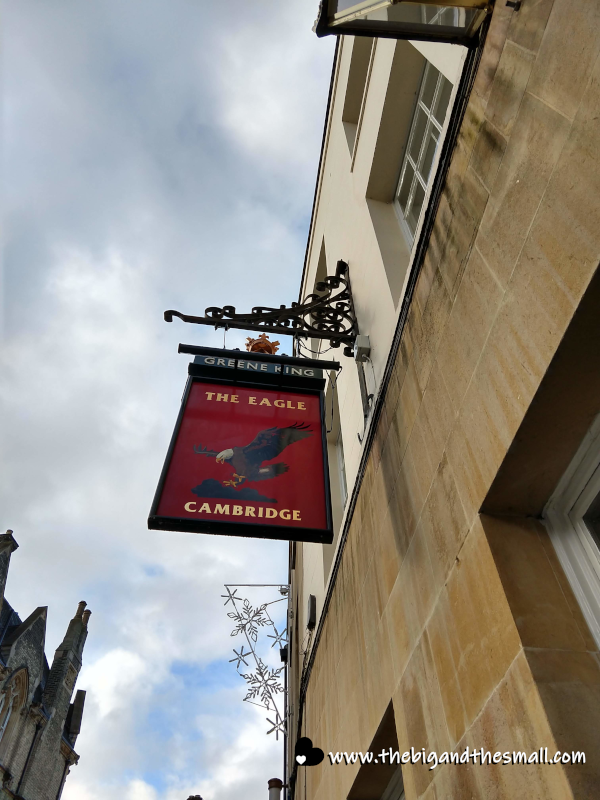 During World War II, the pub was a popular hangout space for members of the Royal Air Force and the United States Army Air Force. These young men would gather here when not on duty - perhaps to celebrate having survived so far, or to mourn the loss of a friend and brother in arms. At night, the blackout curtains would have been drawn because of the threats of bombs from German aircraft. The space would have been loud, boisterous, and filled with cigarette smoke. It draws quite a different picture than the spacious light-filled pub I got to see. 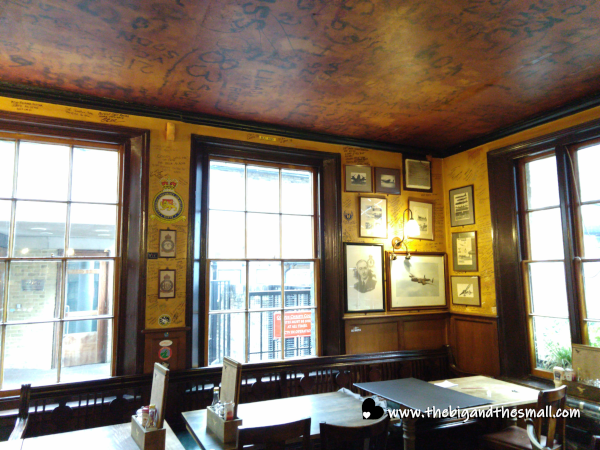 But notice the ceiling in that picture. One night, an enthusiastic young man jumped up on a table, and, cigarette lighter in hand and the cheers of his comrades in his ears, inscribed his name on the ceiling in soot. Quite unintentionally, I imagine, he started a tradition. For the remainder of the war men from both the RAF and the USAAF would continue to gather here and leave their mark on the ceiling. By the eighties, the names had faded and become a rather unsightly mar on the ceiling. When the pub underwent renovations in the early nineties, it seemed that the ceiling would be painted over, and lost to history. Instead, the owners allowed former RAF Chief Technician James Chainey to research the names and restore the ceiling. Now it is a tourist attraction for many! 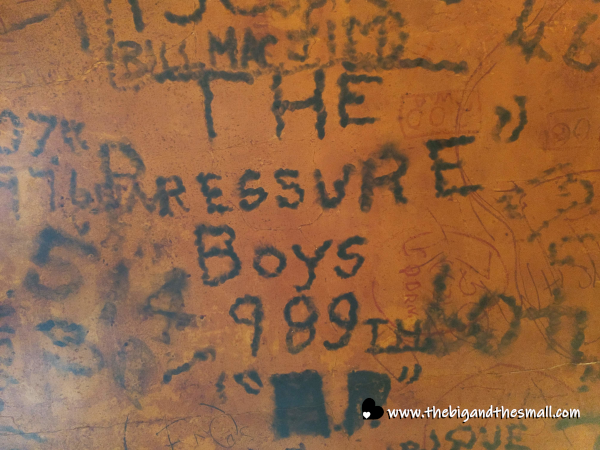 One other thing that makes the Eagle particularly noteworthy is that it was a frequent hangout for Francis Crick and James Watson. Do those names sounds familiar? They are the scientists who discovered DNA! The story goes that it was in this pub (in this very spot pictured!) that they made the first public announcement about their discovery, saying, "We have discovered the secret of life." Supposedly they dined in this establishment six days a week while they were doing research! 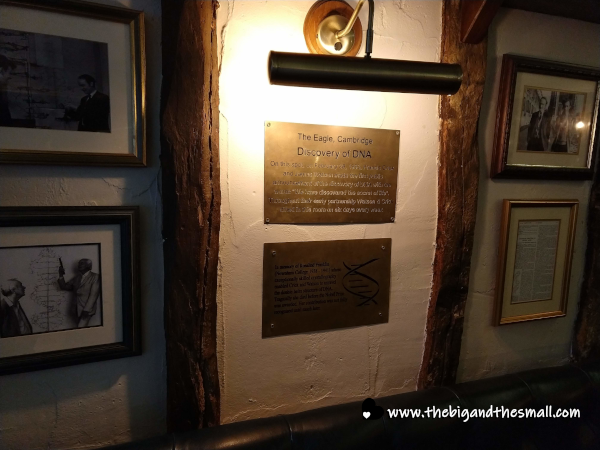 After our tour of the pub we went for lunch somewhere else (I'll share all about the food joints later this week!) and then we went for a tour of some of the college campuses. Because Cambridge is an active university and a tourist attraction, they actually restrict parts of the campus quite heavily. Unless you are a student, an alumni, or the guest of alumni, you have to pay to enter. Luckily for us, Vince is an alumnus! He received his degree in engineering from Cambridge, and while he was here he lived and worked in Trinity Hall, so that's where we headed. Stepping behind the medieval stone walls is so cool. I can only imagine how amazing it would have been to go to school here. 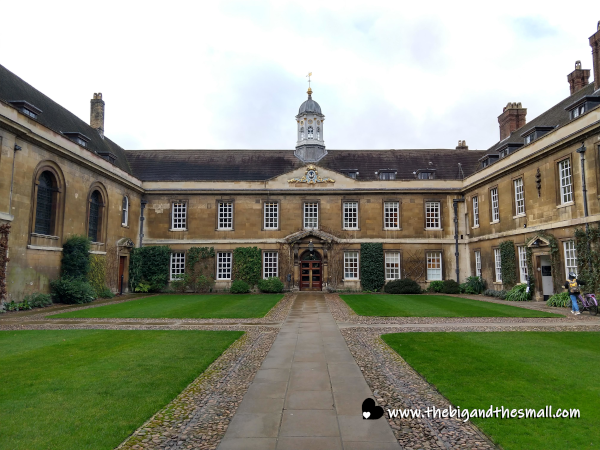 Part of me is kicking myself for not setting my sights further when I went to college - I knew I wanted to leave Iowa but I didn't get as far as thinking to leave the country! Of course, I'm not sure I would have appreciated as much at 18 as I do now. At one point I asked Vince if he really understood the incredible position he was in, getting to study at Cambridge. He said in part yes, he knew he was blessed to be there, and in part no, he was a typical teenager who sometimes takes things for granted. We visited the chapel for Trinity Hall (each college of the university has their own) where students can attend daily worship services by the Church of England. 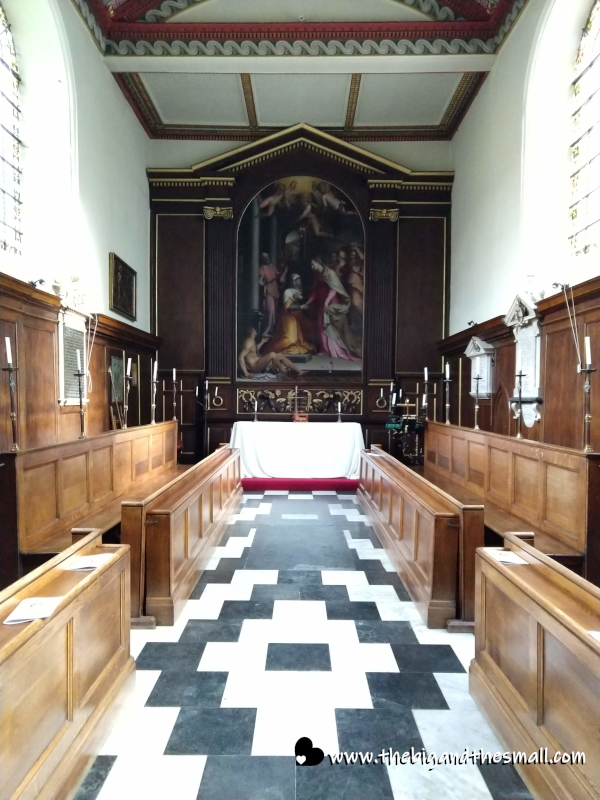 We walked all around as Vince reminisced, and it was so fun to hear about the memories he has here. Even living vicariously through his nostalgia made me feel a bit nostalgic for my own college days. We only got to see the buildings from the outside (even an alumni pass only gets you so far) but I could imagine what it would be like to live in these storied halls. Vince pointed out the dorm he lived in his first year - it was the middle window in the picture below, but on the other side of the hall so overlooking the other courtyard. 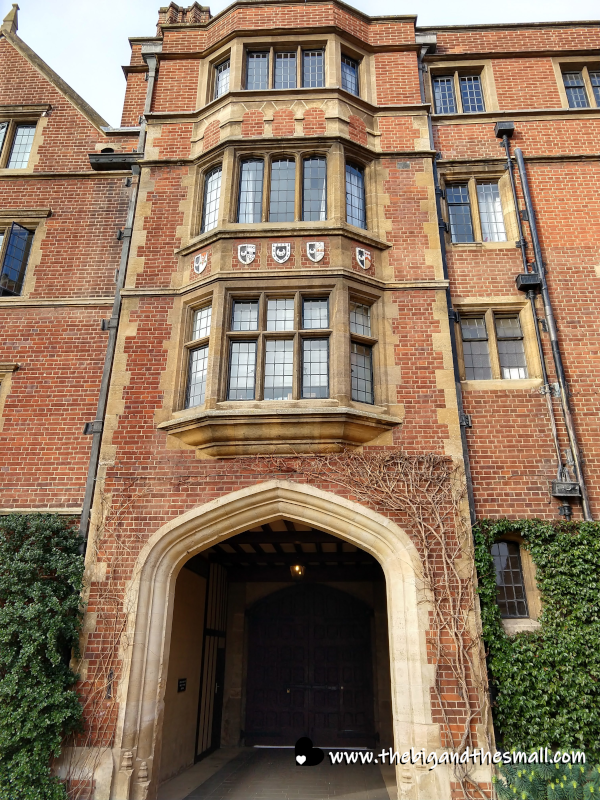 This building dates back to sometime in the 1300's, and has been beautifully restored. It is now used for fancy meetings and events - when we peeked inside we could see the space being set up for a formal dinner. My favorite is the wooden door halfway up the wall - a door to nowhere! I love that they kept it even though the original staircase that would have made the door make sense is long gone. 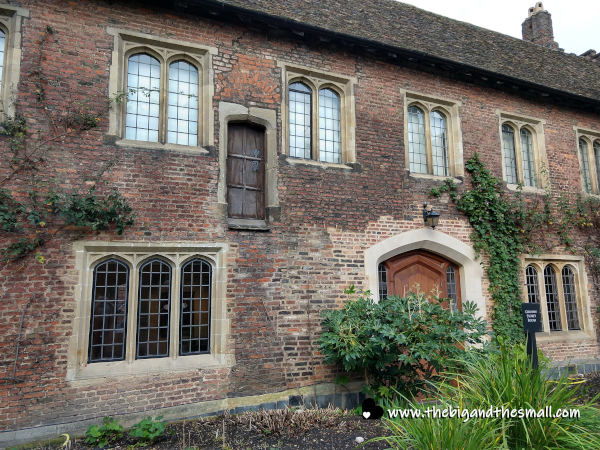 The Trinity Hall campus is back ended by the river Cam (aka the river the town is named for.) There are special types of boats used on this river called "Punts" - and when you use one you are "Punting." The 'driver' so-to-speak stands at the back of the long, flat boat, using a huge pole to push off the bottom of the river to steer. Vince worked his way through school as a punter and reckons he could still do it if he got out on the water. However, we decided it was too cold and rainy to try it this particular day - though it didn't stop others from being out there! Someday I want to go back and try this out. (It reminded me a lot of the gondolas in Venice!) 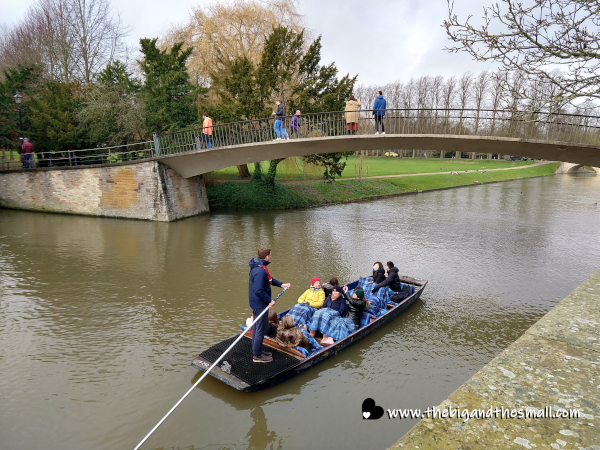 After our thorough walk down memory lane, we still had plenty to do in Cambridge and I will tell you all about it this week. It was a full and amazing day and I am so grateful Vince and Joan took me with them!