Make new friends, but keep the old, one is silver, and the other, gold!

Who else sang that song as a child? I learned it in the Girls Scouts and it has often popped into my head as an adult. I don't really remember why some friends are silver, some are gold, or how to differentiate between the two, but I love the idea of making new friends, keeping old ones, and having an ever-expanding social circle. One of the best parts of travel, for me, has been meeting new people all over the world. We've kept in touch with many of the people we housesat for, I've made countless Facebook friends and connections with people in every place we've been to, and then, of course, there is Steve, who has played a large role in many of our adventures since we met him over a year ago now. 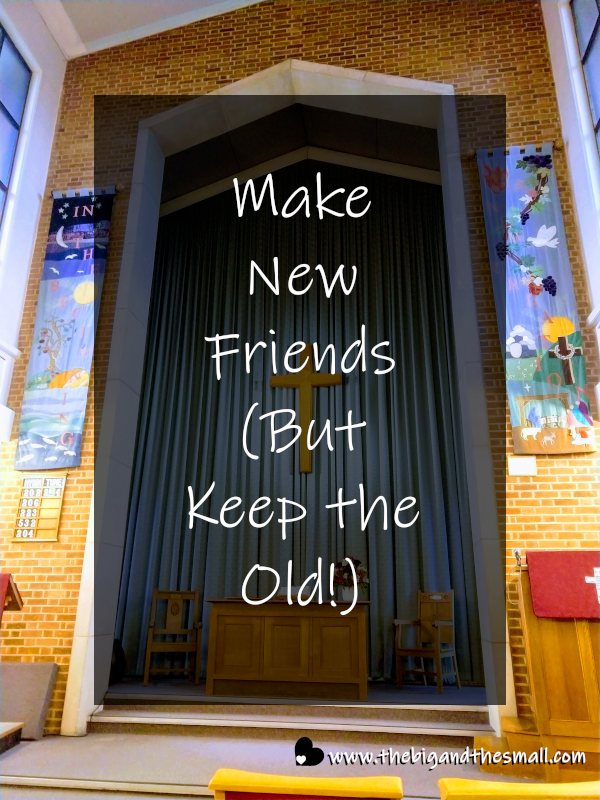 I've had several people ask me how we make new friends as we travel and my number one answer besides housesitting (as through that we meet our hosts and often their friends/neighbors they introduce us to) has been going to church. Now, going to church hasn't always been possible. Sometimes we've been too far away from one, or unable to understand the language at another, but any time that we have been close enough to attend an English-speaking church I have attended, at least once.

In Wales in the fall of 2018, it was through the local Methodist church that we met people in the community, ended up hosting a dozen people for Thanksgiving, and, in a roundabout way is how we met Steve. Those relationships are what led me to feel called to applying to the Methodist Church in Britain and that has now determined what the next five years of our lives will look like. When we returned to Wales in November of 2019 I was hoping we would be close enough to a Methodist church to attend one, but unfortunately, there were none near enough to where we were located.

When we left our final housesit and entered into this time of limbo, we booked a pretty random Airbnb in a suburb of London. And by suburb I mean we are a good 50-minute drive or hour-plus train ride into the city proper. We picked this Airbnb for the price - it was pretty much the only one that fit into our very limited budget. When we arrived, I did a quick Google search of the area and was delighted to find there was a Methodist church less than a mile away! So the first Sunday we were here, the 29th, I headed to church.

The church building itself was cold (they turned the heat on just for the morning and it didn't have time to really heat the large space) but the welcome I received was warm. The worship service was very Methodist, precisely an hour, and then I attended the fellowship time after for a cup of tea and a biscuit. People always notice my accent (or I would argue, lack of one!) right away and strike up conversations about where I'm from, what I'm doing here, etc. In the middle of one conversation, I was asked if I had any plans for the afternoon and when I responded with no, Joel and I were invited to lunch! I am always up for dining with new people so I said yes (knowing that introverted Joel would have hesitated a bit more but he would go along with it.)

We ended up at the home of a lovely couple named Vince and Joan. Vince is British and Joan is an American from Georgia! They met about 15 years ago through an online church they were both helping run, and once they met in person, the rest, as they say, is history. The conversation (and the wine) flowed easily as we chatted about church traditions (Vince is Methodist, Joan is Anglican, both serve as lay preachers in their respective denominations), the challenges of living in a foreign country, and what foods or other things Joan misses from back home. Many stories were shared and laughter was abundant.

Lunch that day was a cottage pie made from Christmas leftovers so instead of beef mince, they used chopped up roast beef. Holy moly was that tasty! Dessert was a traditional English Christmas cake, which is to say, a fruitcake covered in frosting. Vince shared that the tradition is to eat this cake with a slice of sharp cheddar cheese, so we thought we'd give that a go. It was...um...interesting. I love British cheddar cheese. Christmas cake? Not so much. The cheese made it better but I'd really rather just eat the cheese on its own. 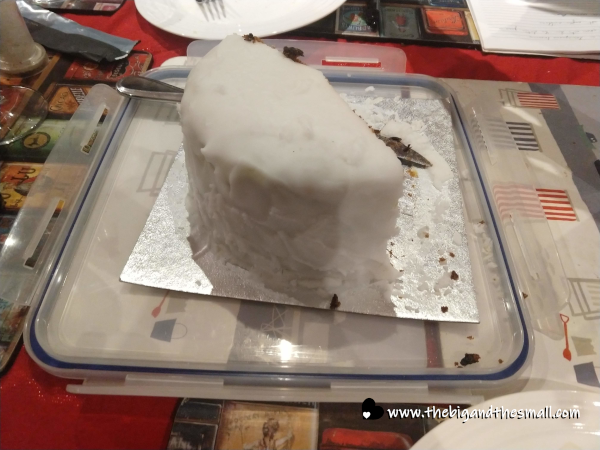 Late in the day we parted ways after Vince drove us back to our Airbnb and we exchanged numbers and promised to keep in touch. Before the next Sunday rolled around Joan texted and invited us to lunch after worship again. The food and the company was so wonderful we, of course, said yes. This week we were treated to vegetable soup which, while it isn't much to look at, was delicious. 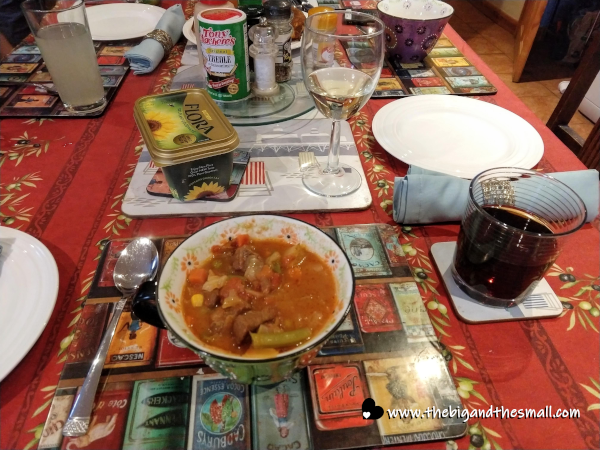 Joan also made homemade cornbread which she said you can't get anywhere in England but in her kitchen! In true southern fashion, it was made with buttermilk and baked in a cast-iron skillet. Again, it's not much to look at but I love fresh from the oven hot cornbread smothered in butter. I ate two extra slices in lieu of any dessert. 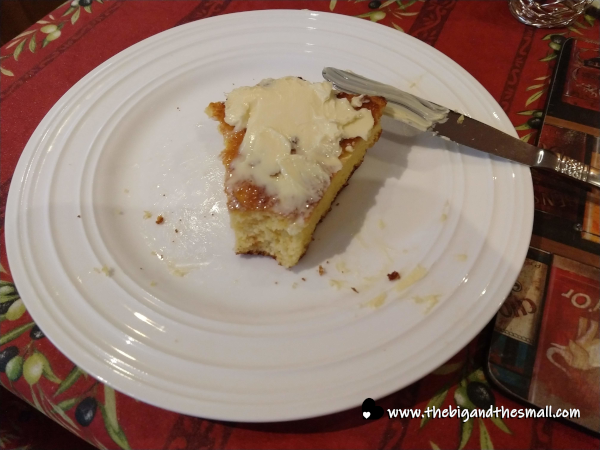 Dessert this time was homemade ice cream pulled from the freezer. They shared how every summer they host an ice cream social fundraiser that features five different kinds of homemade ice cream and five different kinds of homemade toppings including hot fudge! It was then I knew we were in the presence of some truly epic hosts. Joel really enjoyed the ginger ice cream (ginger is not my jam) while I found it amusing to watch everyone eat their ice cream with a fork and spoon. (The ice cream was quite frozen so they used the fork break it up into edible chunks.) 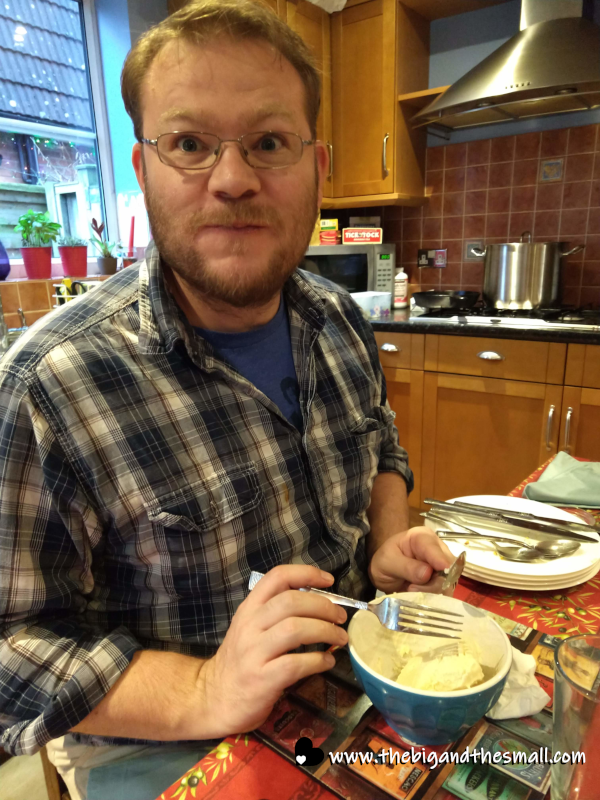 Over the course of getting to know them, we shared with Vince and Joan our current unique situation as we wait an indeterminate amount of time for something that may or may not come through and the financial strain that has put on us as we are having to pay for housing (which we normally don't with housesitting.) Bless them, they asked us when the time was up at our Airbnb and offered to let us stay with them for the foreseeable future. So, as of this Friday, we'll be moving from our current spot to Vince and Joan's home and staying with them until either what we are waiting for works out, or we decide to cut our losses and move on to something else. I anticipate a decision being made no later than the end of the month.

After what happened in Australia with a seemingly generous host we are, of course, a bit wary. However, we have spent more time with Vince and Joan already than we did with that person, and they are truly wonderful people. Meeting them through church puts me at ease as well. We have promised to either pay them back by hosting them in our place at some point in the future (when we have one!) or at the very least to pay it forward someday by hosting someone else in need. (That is actually something we have done quite a bit in the past and one of the reasons I'm excited to have a home of my own again!)

I am looking forward to many shared evening meals, being able to cook again (in our Airbnb we just have a mini-fridge and an electric kettle), and growing our friendship with Vince and Joan. We will do what we can to be the best guests possible!

So, once again, we find ourselves relying on the kindness of relative strangers. This lifestyle of the last 18 months sure has taught me a lot about hospitality and grace! Keep us in your prayers that this will work out well and that what we hoping to come through will come through, quickly.