If you ever ask Joel about his birthday, he'll tell you that he has the worst birthday ever.

He doesn't just mean that he's had some bad birthdays (though there have been some of those), he means that he literally has the worst possible date on which someone could be born. That's right, out of all 365 days of the year, apparently, December 23rd is the worst. 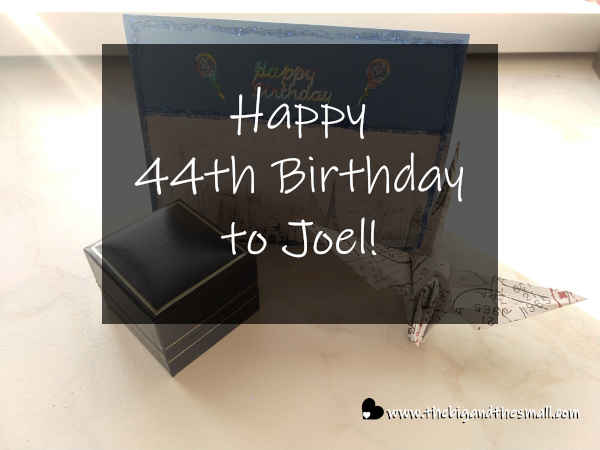 When he was growing up his birthday often got overlooked in the midst of family gatherings that focused on Christmas. While throughout the year his siblings/cousins would get a whole party and multiple presents just for their birthday, Joel would just get the same Christmas presents everyone got, with maybe one extra for his birthday, if anyone remembered at all.

As his spouse, I have to say, I agree. It's tough to be born this close to Christmas. When I wanted to throw Joel a surprise party for his 40th birthday I had to plan it for the first weekend in December because the closer we got to Christmas, the less family and friends were free to attend a party. Everyone travels or has other obligations this close to Christmas, so it's hard to celebrate right on his birthday.

Of course, Joel also went and married a pastor, so this is usually one of my busiest times of the year. Since I'm on sabbatical right now we were able to take the day and really focus on his birthday but next year it won't be quite so easy to do.

But wait, you might say, isn't being born on Christmas Eve or Christmas worse? Well, according to Joel, not so. If your birthday is on the 24th or 25th, at least your birthday falls on a holiday. You might get the day off work or school, people are focusing on fun and celebration, and everyone will always remember that your birthday falls on one of those special days. The 23rd is just close enough to get overlooked, forgotten, lost in the hustle and bustle of preparing for Christmas.

However, I do my best to make Joel's birthday special. I'm one of those people who thinks my birthday should be a national holiday so I want Joel to feel just as special on his birthday. This year, I bought a gift way back in Australia in September and it almost killed me to keep a secret this long! I'm not great at buying gifts for people but I knew this one was good and I could not wait to give it to him.

So what is it?

That's right, I bought my husband jewelry for his birthday. When we got married in 2013, we did not spend much money on Joel's wedding band. To be fair, he had already lost the first one (from our legal wedding in 2012) at his bachelor party. I know, it's a bit complicated. We went with something inexpensive that still looked good and that was that.

Fast forward this many years and Joel has lost a bit of weight and his ring is loose. Then, when we were wandering through a mall in Australia, we came across a jewelry store that had a very eye-catching ring in the window. It was a similar style to Joel's current ring except it has a black center and then an electric blue highlight. My engagement band has sapphires so we thought it would be cool if Joel had a wedding band with blue to match! We went into the store, he tried it on, and it fit perfectly! However, we decided it wasn't worth spending the money on the ring just then. (It was not expensive, actually cheaper than his original inexpensive ring thanks to the exchange rate and a sale that was happening, but we are on a tight budget as we travel.)

Unbeknownst to Joel, I went back the next day without him and bought it. When he wanted to admire the ring again a few days later he was disappointed to learn it had been sold, and it was all I could do not to burst with the secret that it had been sold to me! I was so excited today to finally give to him. 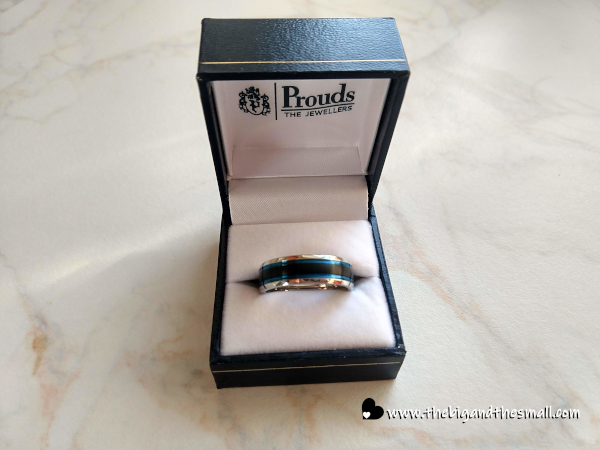 I also gave him a homemade card (courtesy of Elaine's craft room in Australia) and a paper crane I folded out of craft paper printed with passport stamps (as an homage to our travels.) 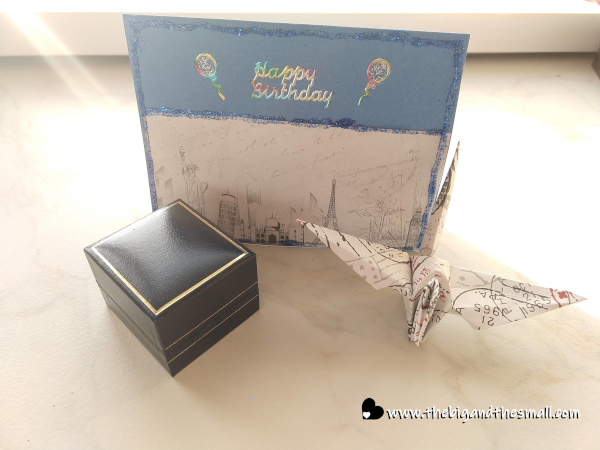 I gave Joel his present this morning and then we watched a movie of his choice (Black Death - happy, right?) Then we went for a long walk on what was an absolutely beautiful day here - the sun was shining and everything! Joel then took a nap while I made dinner - I pulled together a broccoli cheese soup with chicken from some food we needed to use up and while it was delicious it was labor-intensive and I will never make it again. (I had to shred an entire 1 pound block of cheese by hand - my arm hurts!) I also made chocolate peanut butter puff pastries for dessert and I didn't take any pictures of any of the food because I was tired.

Now we are settling in for a night of more movies (just finished Scott Pilgrim vs. the World, I'm not sure what's next!) and relaxing.

The plight of the NEARLY Christmas'd birthdays...

Happy Birthday Joel! My dad's is the 28th, directly between Christmas and New Year's and is also often overlooked. We celebrate his with "the birthday tree" where we reuse the Christmas tree in his honor. His birthday gifts get two days solo under the tree and sometimes we throw some bows on the top.

I Want A Birthday Tree!

That's such a fun way to celebrate! Maybe I should put Joel's present under the tree next year... since we don't really do Christmas presents it doesn't have to compete, lol.