On the day that we ventured to Mwnt with Steve, we also made it over to Cardigan, the bigger town in the area. This is also the closest town with good grocery stores (Tesco and Aldi) so we have been back several times to stock up! Every time we went we explored a little bit more of the area. I really love the High Street in Cardigan and this is totally the kind of town I would love to settle down in when we finally get to live here for real! 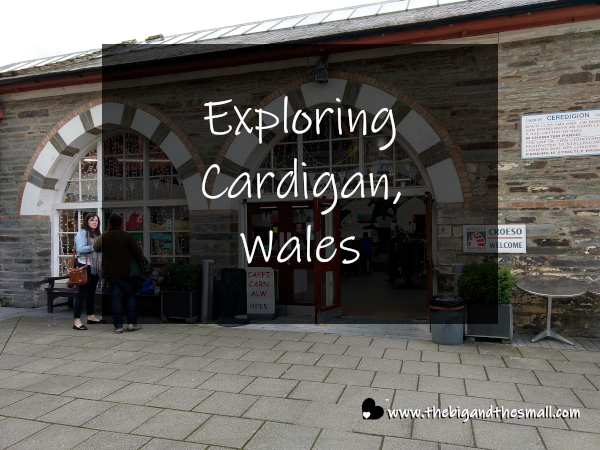 In addition to all of the shops on the High Street there is a huge indoor market area where a multitude of vendors have little booths set up. It was pretty much exactly like the markets we went to in Fremantle, Australia except that instead of hot it was cold. If you know me by now you know I'll take the cold over the heat any day! There were these neat wicker dolphins hanging from the ceiling, I assume a nod to the supposedly famous dolphins that hang out in the nearby Cardigan Bay. 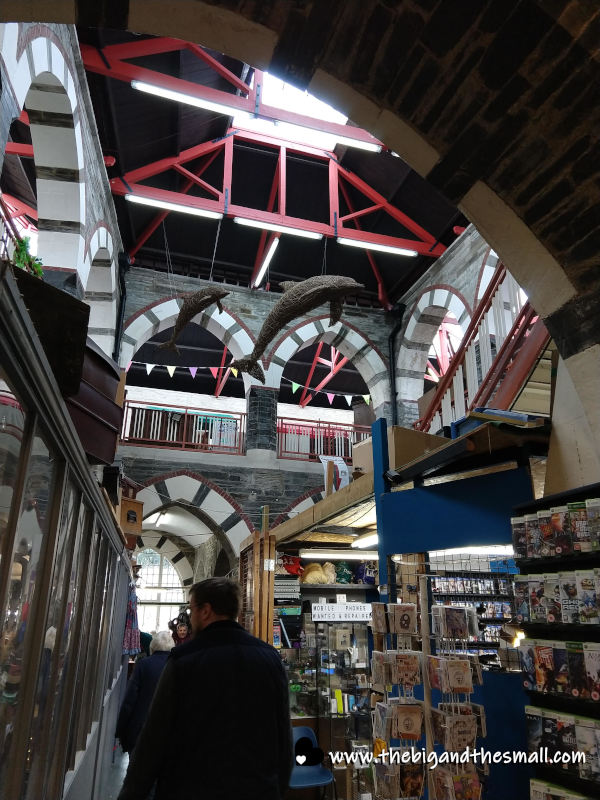 As we left the market I noticed a plaque on the ground denoting that a time capsule was buried underneath. The time capsule was placed there on New Year's Eve 2010 - in celebration of the town existing for 900 years. Nine hundred years!! This is something I don't think I'll ever get over when in the UK - exploring towns and places that existed centuries before the USA was even a dream in somebody's mind. There was nothing noting when the time capsule would be opened...perhaps another 900 years? 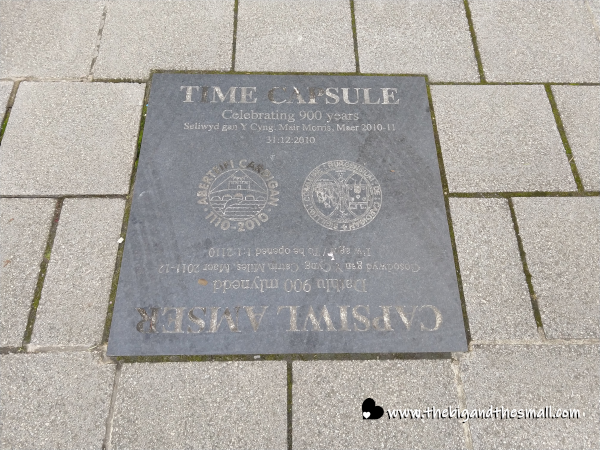 Almost every time we go we take a while to wander up and down the High Street. We are always impressed with how many people are out and about. Whether it's a Saturday afternoon or a random Tuesday morning the streets are always bustling. When I've lived in towns with similar main streets (Ames, Fort Dodge) I have never seen them this busy, unless there was some special event. I love that people here really seem to invest in their towns. My absolute favorite part was the day we wandered around with Steve and there was a man sitting on a little side street, playing the accordion. He was very good and the music lent an air of magic to an ordinary day, like life was suddenly a quaint movie complete with soundtrack. We put some money in his case to show our appreciation. 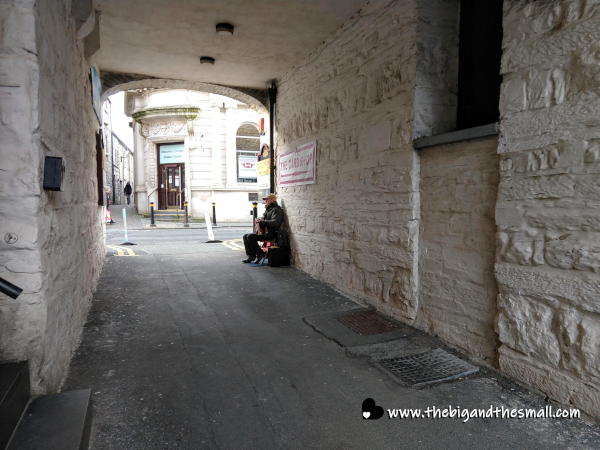 Of course, a close second favorite for me is all the charity shops! I don't think I made it to all of them, but over the course of our visits, I explored quite a few of them. I found plenty of things I wished I could buy (including a fully lit and decorated Christmas tree for only £10!) but I restricted myself to only a few things I actually needed - a pair of jeans and a real winter coat. I cannot wait until we settle down sometime next year and I can start furnishing a home with treasures I find at the charity shop. Until then, I do love my new (to me) jeans that were only £3 and this coat was only £12! 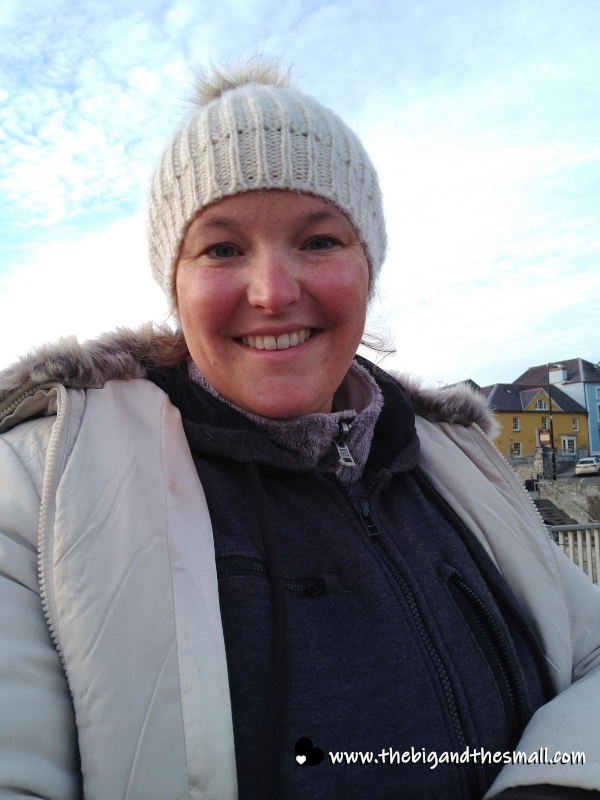 At the end of the High Street is the castle (which we skipped! So unlike us!) and then the river. The bridge was old, stone and beautiful, and this area in front of it appeared to be some sort of outdoor theater area. 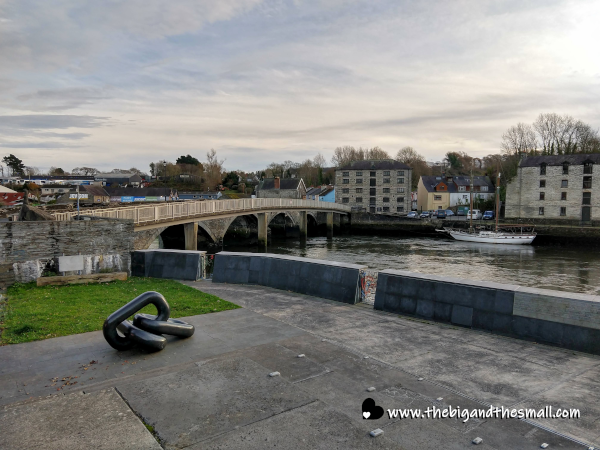 The first time that we went to get my fingerprints taken, we asked for recommendations at both the library and the post office as to where we could get a good English breakfast. Both places emphatically recommended the Priory Cafe so that's where we went! Every iteration of the English breakfast seems to be just a little bit different, and I'm still working out what my favorite version is. This one contained 3 pieces of bacon, 2 sausages, 1 egg, mushrooms, beans, a hashbrown, black pudding, fry bread and toast (not pictured). Joel and I did make one mistake here - we each ordered one instead of splitting it! We thought we were hungry enough...but this is so. much. food. We have decided that from now on we will always split an English breakfast. 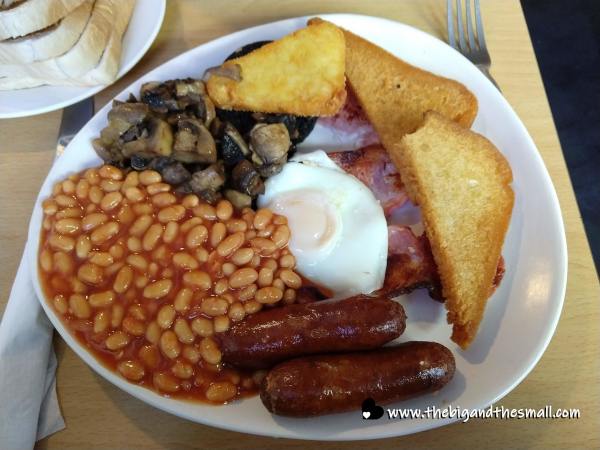 We kept our promise the next time we got one, which was on the way home from the grocery store one Saturday. Joel spotted a sign for a roadside food truck so, on a whim, we decided to stop. I was grateful that this English breakfast came with a cup of tea as we ended up sitting outside to eat it and the hot drink came in handy. 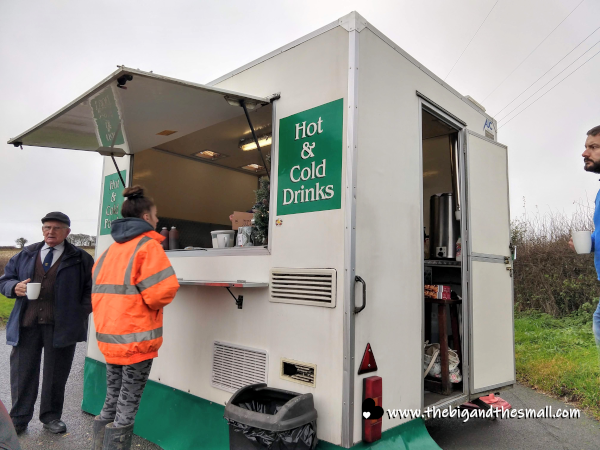 They were nice enough to split the meal onto two plates for us - you can see that even with splitting what is supposed to be one meal we each had a full plate! This one was the same as the one before minus the black pudding/hashbrown/fry bread and plus tomatoes. I missed the fry bread but I don't mind not having the black pudding or hashbrown. Also, the mushrooms in this one were some of the best I've had - whatever seasonings they used were delicious! 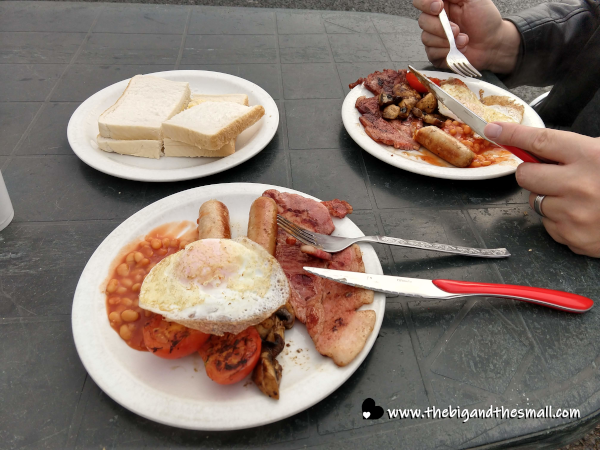 We actually had a third English breakfast at a cafe near the bus stop just this past weekend. However, we were so hungry at the time I forgot to take a picture. This one swapped the fry bread and hashbrown for chips (aka french fries) and instead of whole cooked tomatoes, they were crushed tomatoes. I really liked this version! We complimented the chef on his chips as they were some of the best we've had, and he said the secret was he made them fresh from actual potatoes - they weren't frozen from a bag. No wonder they were so good!

I may be kind of obsessed with finding the best (in my opinion) English breakfast and I plan to keep trying new places until I find it. I'm hoping once we settle down I'll find a local place with my favorite and become a regular there!

Okay, enough about food. If you ever find yourself in western Wales, Cardigan is a great little town to visit!