When we left off yesterday we had explored the ancient church in Mwnt and climbed to the top of what felt like a mountain but I'm sure was just a big hill. From there we climbed back down, past the church, past the car park, and headed to the beach and waterfall area of Mwnt. 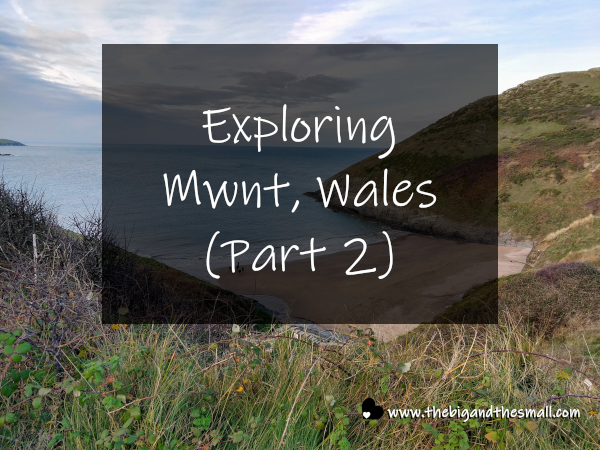 At the top of the road was a sign that told us we were entering the coastal path. It was a bit of steep walk down to a small park area then from there we could take stairs that went alongside the waterfall on the way down to the beach. 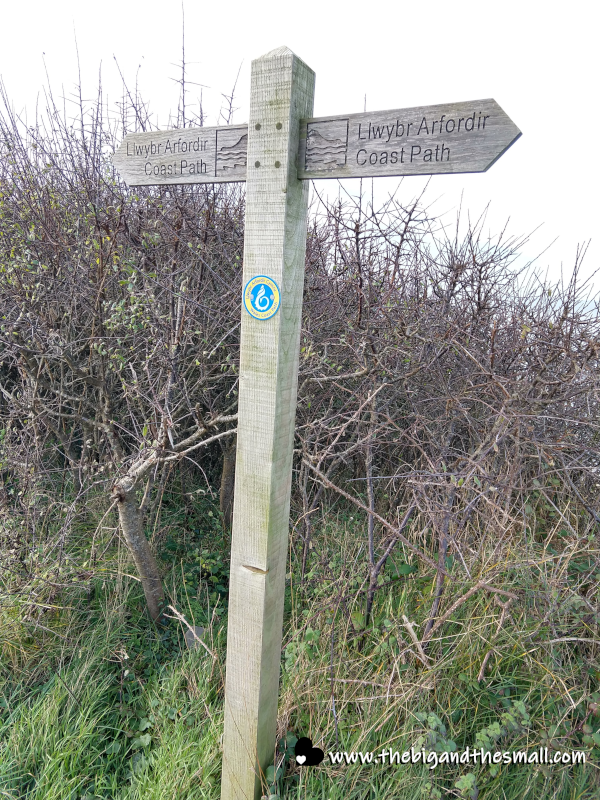 From the park area, we had a good view looking back at where we had just hiked. If you squint at the top of the hill you can just make out two people standing there. That's where we had been just 10 minutes previously! 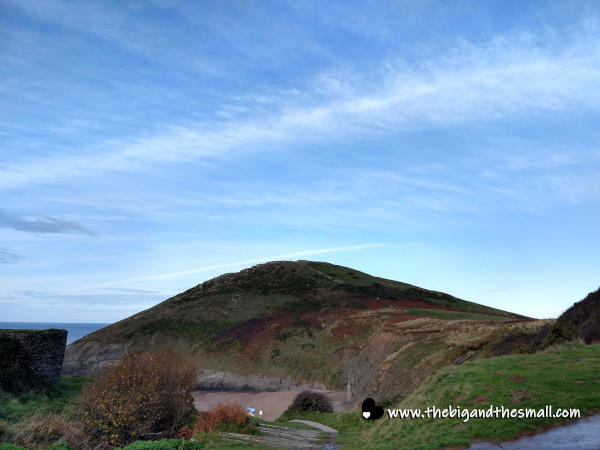 Before heading down near the waterfall we walked a little further on, to a cliff that gave us an incredible view of the water and the beach below. From a distance, the cliff looked like it was all even land but when we got there it turned out there was a big divot in the ground. I asked Steve what he thought it was and he said it might have been some sort of kiln or furnace way back in the day. 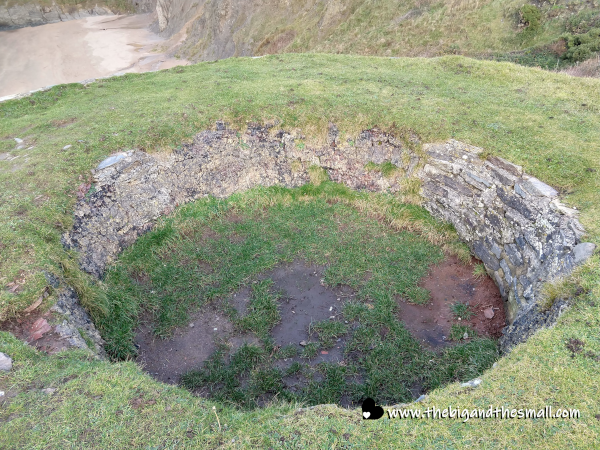 From this vantage point, we could see the stairs that would take us down to the beach, and more of the waterfall that ran alongside. I was excited to get close to both of those things! (Yes, I know I said I hate the beach, but they are different in the UK!) 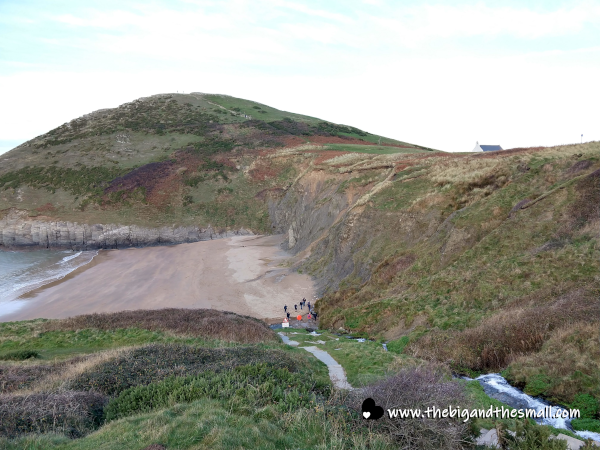 The walk down to the bottom was easy and the view upon arrival was incredible. I loved looking out at the ocean from this safe (aka non-sandy) viewpoint. A sign at the top had told me to keep watch for the "famous bottlenose dolphins and grey seals of Cardigan Bay." I kept watch for a good long while but unfortunately, I never spotted any. 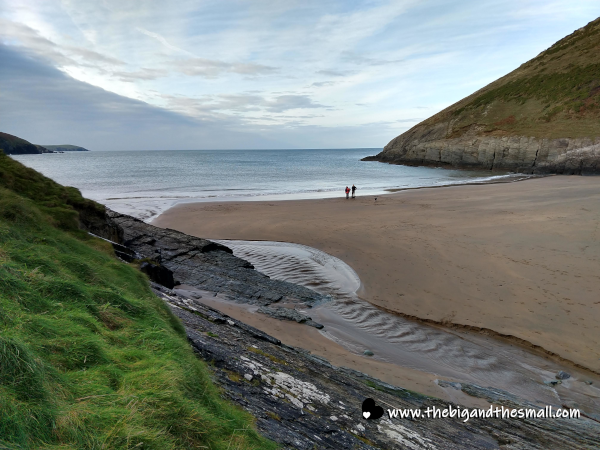 The sound of the running water from the waterfall was comforting and energizing at the same time. I made sure to breath deep as the air just seemed fresher here! 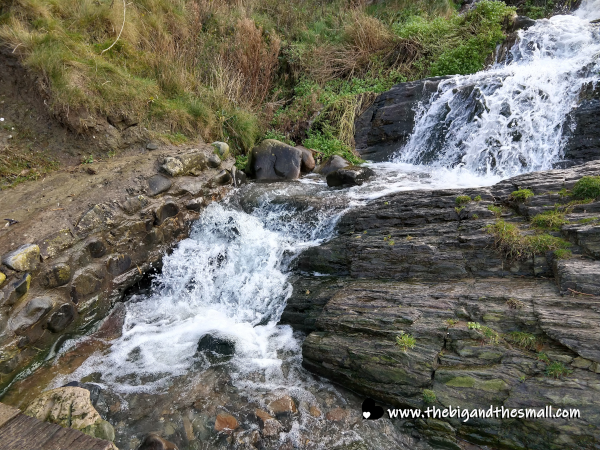 While I sat there, Steve started reminiscing about times in his childhood when he went to the seaside. He said his favorite thing was to find little rivulets of water like this and work with nearby sticks and rocks to dam them up. Before I knew what was happening Steve had wandered out onto the sand, found a big stick, and thrown it into the water to try and begin a dam. 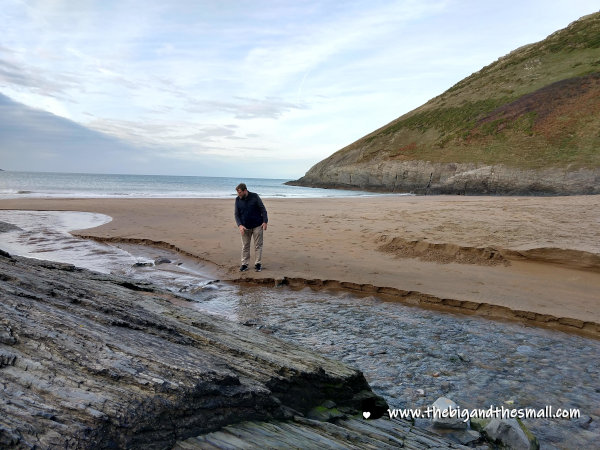 Then things got even sillier as both boys decided to remove their shoes so they could walk in the water! Keep in mind it was only about 45 degrees outside at this time. I decided to sit on the stairs and document their craziness rather than join them. 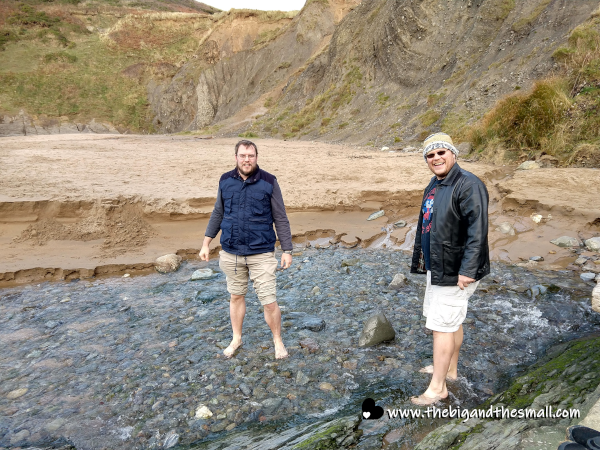 Steve continued his mission to create a dam by picking up rather large rocks and carrying them down to where he had thrown the stick. Joel was going to join him until I reminded him that while Steve has the advantage of the NHS (Britain's universal healthcare) he does not. By which I meant if Steve dropped a big rock on his foot, oh well, we'd take him to hospital and he'd be fine. If Joel did the same it would cost us a lot more money! So Joel decided to just supervise instead. 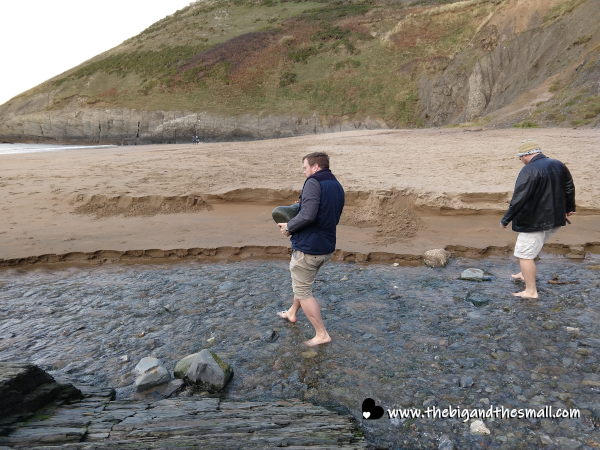 After about ten minutes Steve was satisfied with his work on the "dam" as he had made the water reroute a little around the obstacle he had made. It was fun to see how much joy he took out of such a simple activity, even as an adult. The boys came back to where I was sitting so they could sit and let their feet dry off a bit, then they put their shoes back on and we headed back up the stairs. From there we got back in the car and headed off to Cardigan, another nearby town to explore, which I'll share about another day.