I shared in this post about our exploration of nearby seaside towns that Joel asked a random couple wandering by what there was worth visiting in the area. While a few of the places they mentioned were already on our list, one was not and likely never would have been had it not been for Joel spontaneously asking them that question. They told us about a place on the way to Cardigan named Mwnt. It's not really a town, more of an area, but as soon as they told us there was a 14th-century church one could visit, we knew we would be heading there the next day. I am all about seeing old churches! 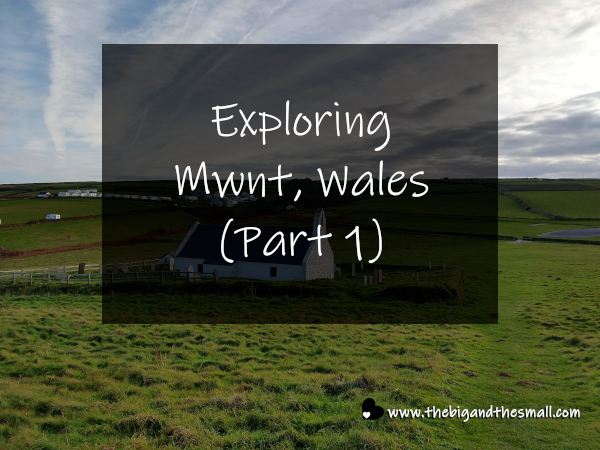 I'm not sure how long the drive was from our housesit as Steve, Joel and I were chatting in the car and I lost track of time. It wasn't very long, however, before Steve was navigating his car through narrow, windy roads that almost felt like they were closing in us. Then suddenly, we rounded a corner and were rewarded with the most expansive, incredible view of the sea. The view was awe-inspiring just from the car park so we were eager to leave the car and set out to explore. Even the view from the parking lot was awe-inspiring. 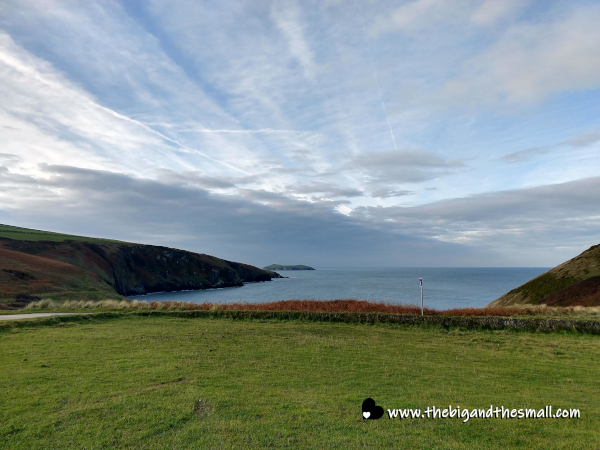 We quickly ascertained that the small white building we saw in the distance must be the Holy Cross Church we came to see so we headed in that direction. Though the lot had about a dozen cars parked in it we had the church to ourselves the whole time we were there. 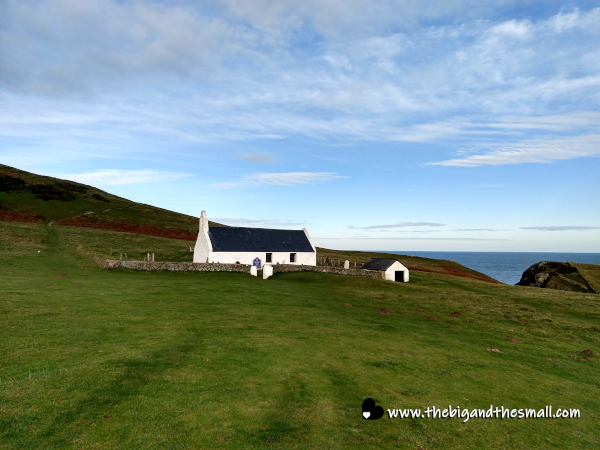 The blue sign posted outside the church let us know that this is still an active congregation in the Church of Wales, at least for part of the year. At first, I was quite excited, thinking perhaps we could go to a service here on a Sunday, but alas, they only have Sunday services during the summer months. (I assumed due to a lack of heating.) They also have a Christmas Eve service and while I would love to attend that we will no longer have use of a car by that date (due to insurance reasons) so I won't get to. 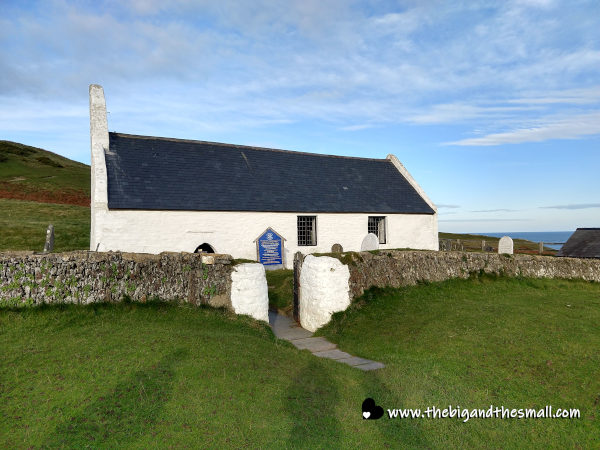 The grounds surrounding the church contain gravestones which, while common around here, is not something I've really experienced with churches back in the States. So it still slightly unnerves me every time I see it. 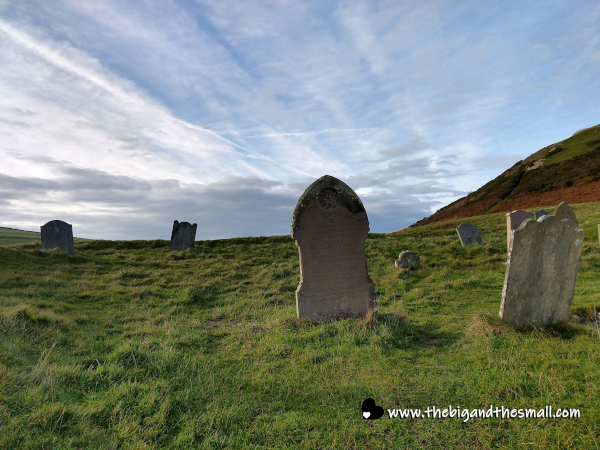 Inside the church was simple and rustic, yet enchanting. I love thinking about the centuries of worship that have taken place in buildings like this, and someday I dream of leading worship somewhere with such a magnificent history. Information in the church told me that worship has taken place on these grounds since the "Age of the Saints" in Wales, which dates back to the 5th and 6th centuries. The particular building still standing doesn't have an exact age but likely dates back to the late 13th or early 14th century. A fun fact, for this Methodist minister at least, is that in the late 18th/early 19th centuries, during the Methodist Revival in Wales this church became a frequent meeting place for clergymen with Methodist leanings. 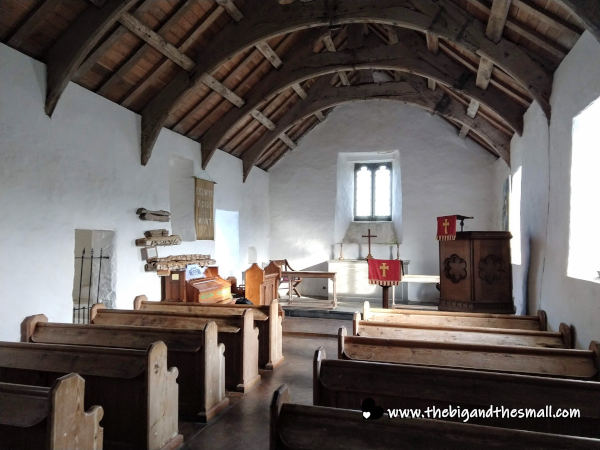 It is likely that the inside of the church was more elaborate at one point, but today it is rather austere. I found beauty in its simplicity, however, especially in the way the sun shone through ever so brightly that day. The doorway to the church had a lovely shape, but it was rather small for this day and age. People were shorter centuries ago so I'm sure it was adequate for the time, but these days people like Joel and Steve had to duck to enter! I could walk through the center of the doorway perfectly. 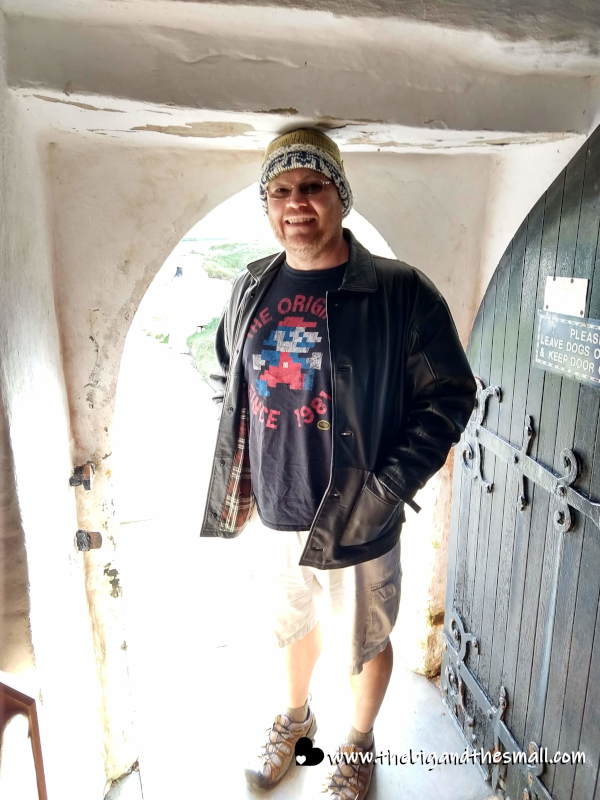 After spending quite a while in the church (I spent some time in prayer over what I discussed yesterday) we set out to explore the hills and the coastline just outside the church. Joel sped on ahead of us, making it up the hill (mountain?) in record time. 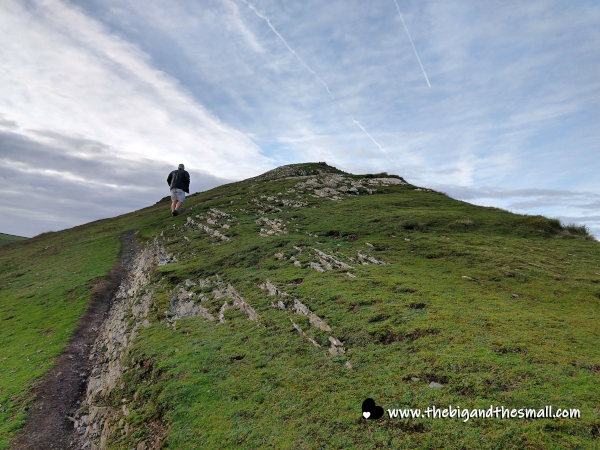 However, before he could get to the very top his struggle with heights kicked in and he had to turn around and go back down. You can see the top of his head in this photo if you squint, and you can see the church in the distance, giving you an idea of how far up we were. 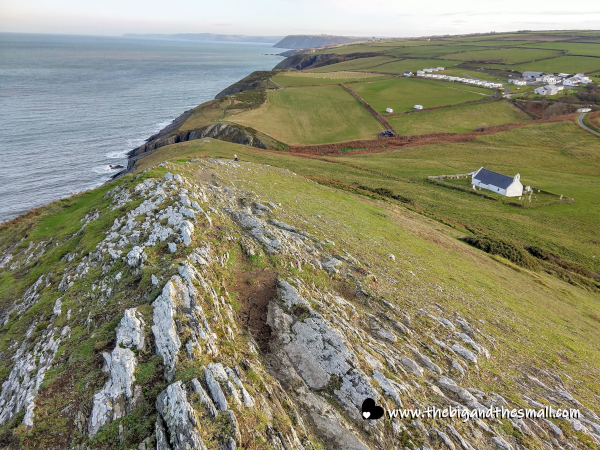 I'm still not in as good of shape as I would like to be but I am at a point where I enjoyed the challenge of getting to the top of this hill. I was slightly out of breath on arrival and yet I felt more energized than I have been in a long time. As a pastor, I sometimes talk about how there are "thin places" in the world - places where the divine seems much closer than normal. I would name the top of this hill near the church in Mwnt as a thin place, at least for me. I felt an incredible sense of freedom and peace. 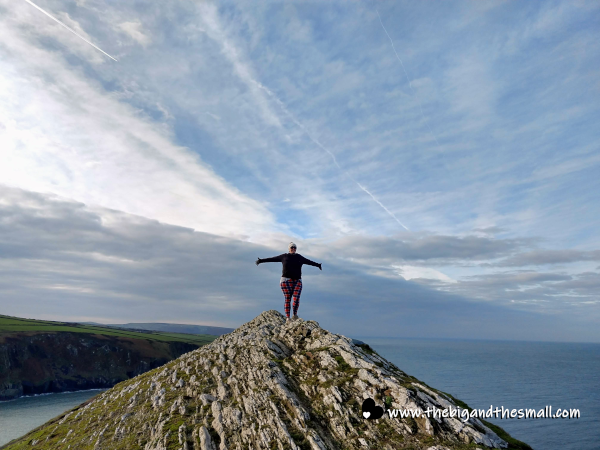 I can understand why for centuries people have gathered in this place to worship, it truly feels like God is near. The smell of the sea, the wind in my hair, the sun shining on my face, and this view that looks like it could be the edge of the world... yes, this is holy. 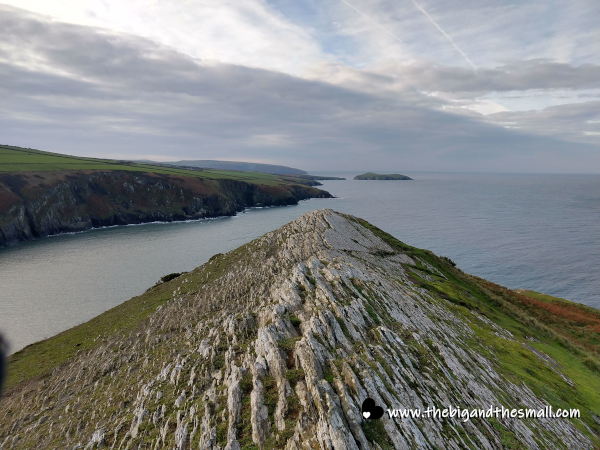 From here we also spotted a nearby beach and, more importantly, a small waterfall! After enjoying our time on top of the world we made our way back down and headed over to the area you see in this next picture. I'll share more about that tomorrow! 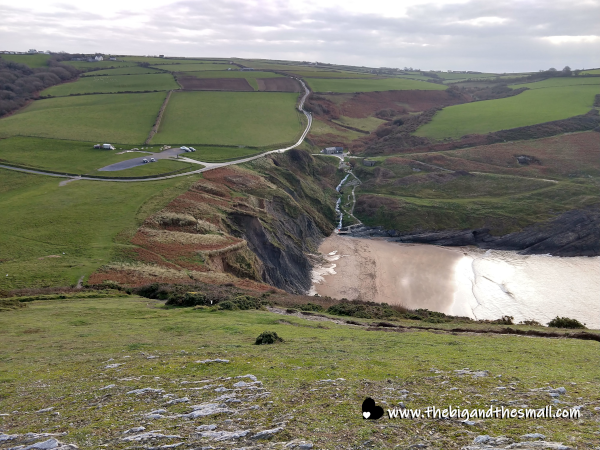 There is something about all of Wales that just speaks to me, to my heart, to my soul. Every time I am outside in Wales I can't wipe the smile off my face (yes, even when it's windy and rainy.) My mom has done my DNA profile and learned that a good portion of me hails from the British Isles, so her theory is that something here speaks to something deep in my DNA. Perhaps she is correct. Whatever it is, I am so glad to be in Wales and for opportunities to explore places like this!