When Steve was here last week for Thanksgiving we set out to do a bit of exploring around the area. This time last year we were on our epic road trip through the UK with Steve so it was fun to feel like we were re-living a bit of that even if we could only go out and explore for about 4 hours at a time (due to needing to get home to care for Eddy.) So on Friday last week, we headed out to the nearby town of New Quay (pronounced New Key.) 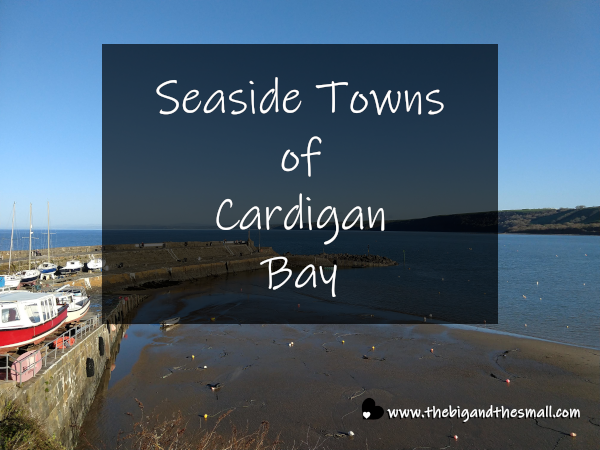 I must be honest, the initial motivation Steve and I had for heading to New Quay is that we were craving gelato. The night before we had chatted about how much I missed the gelato from Italy and Bulgaria and Steve said you can get it here, it's just often called "Italian ice cream") instead of gelato. That led to a Google search of the nearest place to get Italian ice cream which led us to New Quay. New Quay is a seaside town along Cardigan Bay and was about a 30 minutes drive away. The drive itself was absolutely gorgeous as it took us along the coastline of Wales. When we arrived we were treated to a stunning view of the bay! 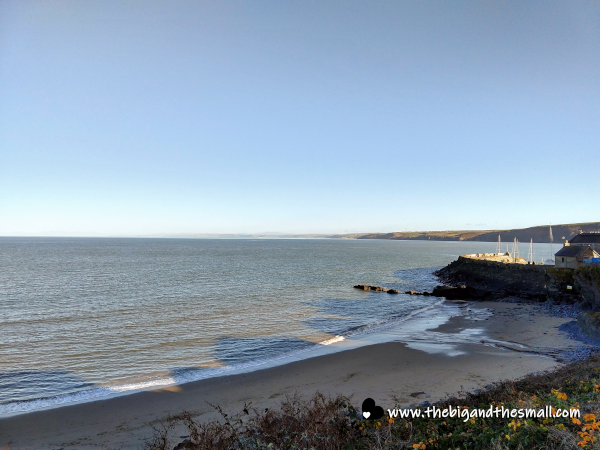 Despite the chill in the air, we wandered around the town to see what there was to do (and to find the Italian ice cream.) As it turns out, New Quay is mostly a holiday destination and not during the winter holidays so much of the town was shut down for the season including, of course, the ice cream place. Don't they realize people still want freezing cold sugary treats even when it's freezing cold outside?! Nevertheless, we continued to wander, affording ourselves of views like this. What I wouldn't give to have one of those homes with a view like this! 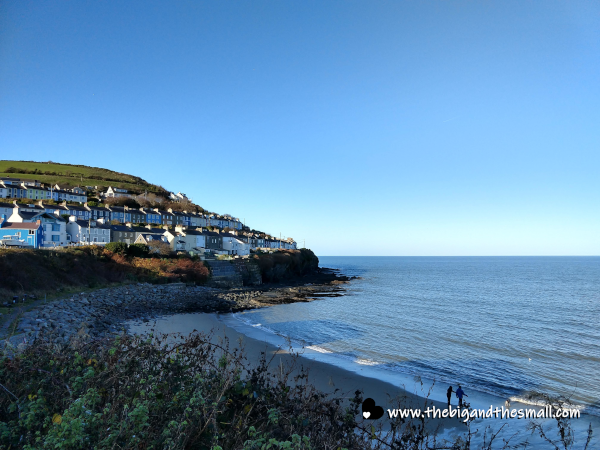 There was a long pier we wandered out onto that brought us close to the water. In fact, there was a set of steps you could walk down to get right to the water's edge - at a higher tide those steps would end up underwater. From signs all around town we gathered that during the summer you can go out on boats to go dolphin watching - at the really quite reasonable sum of only £10 per person for an hour. We never got to go on our dolphin/whale watching tour in Australia so perhaps we'll do this one someday to make up for it! I took this picture standing on the pier looking back at the town. 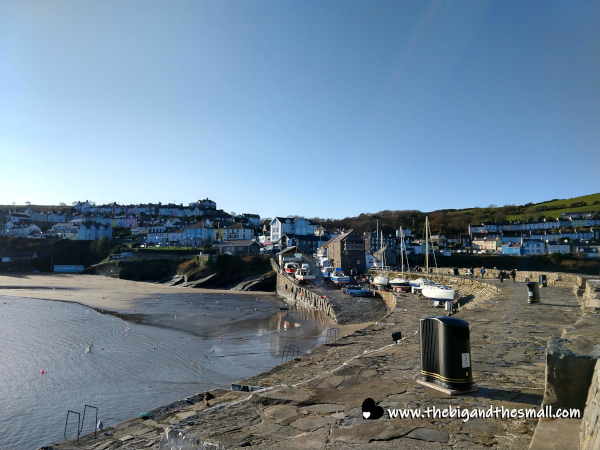 Though there are quite a few houses in New Quay the high street and business district was rather small and for the most part not open. As we wandered aimlessly around the town Joel randomly stopped a couple walking by with their dog to ask what else there was to do in the area. I'm so glad he has the guts to do stuff like that (I never do!) because they ended up telling us about the town we went to next, and a place we ended up going to the next day that was super amazing (I'll share about that next week.)

Before we moved on we did come across a sign in a park that told us about the curious history of the town of New Quay and the author Dylan Thomas. If you are familiar with his play Under Milk Wood I am pleased to inform you that he took inspiration for the play and the town featured in it from his time living in New Quay. The town in the play is named "Llareggub" which totally looks like it could be a Welsh word...but read it backwards! He lived in the town in for only a year (1944-1945) and didn't finish the play until 1953 when he was living in America, but it still features many of the places that were his favorite haunts in New Quay.

After learning about this fun fact we got back in the car and headed about 10 minutes further to the town of Aberaeron. New Quay is a bit too small for my taste but Aberaeron, while not much bigger, is much more my speed. There was an excellent high street with lots of adorable boutiques (including one called Elephants & Bananas for no discernible reason) and plenty of charity shops (my fave.) I especially adored this bridge which connected one side of town to the other, arching over the waterway ever so elegantly. 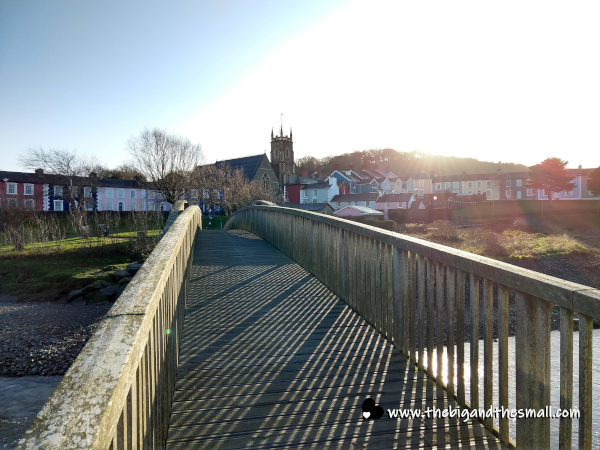 The homes in this town were noticeably colorful - almost every single one sported a shade you don't often see on houses. I loved how it differentiated them, one from another, and found a hot pink one that I would love to live in. I would never buy a home then paint it hot pink, but I would totally love to live in one that was already that color. (Sadly, no Methodist church exists in this town, I checked.) 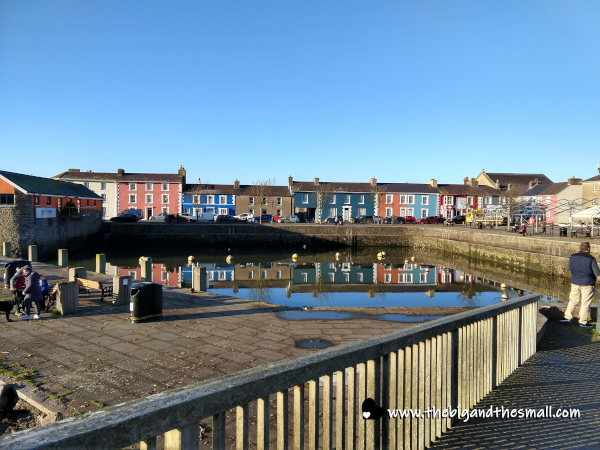 The tide was still low which you can see when you look at this photo of the waterway the bridge traversed. No, that's not Jesus walking on water down there, just a fisherman who was checking on his boats and I think perhaps some lobster traps or something of the sort. 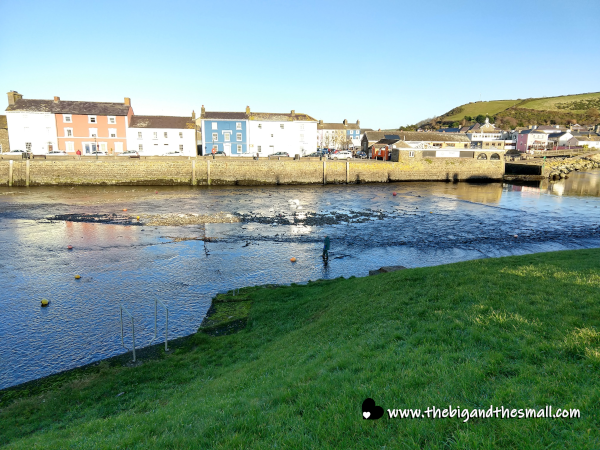 The beach at Aberaeron was a rock beach, which I much prefer to sand as it does not get everywhere as sand does. With this view in our sights, we were treated to an informational sign that told us some interesting information about where we were in the world. I was surprised to learn that at this point we are further north than anywhere in the United States except for Alaska. The town is on the same latitude as Rosslare (Ireland), British Columbia (Canada), Warsaw (Poland), and Lake Baikal (Russia.) If you were to fly due south of here you would cross France, Spain, Western Africa and then nothing until Antarctica. If you flew instead to the North Pole you would only cross Scotland on your way there. Also, a fun fact - for at least 70 days of the year the wind strength here is above 25 mph. 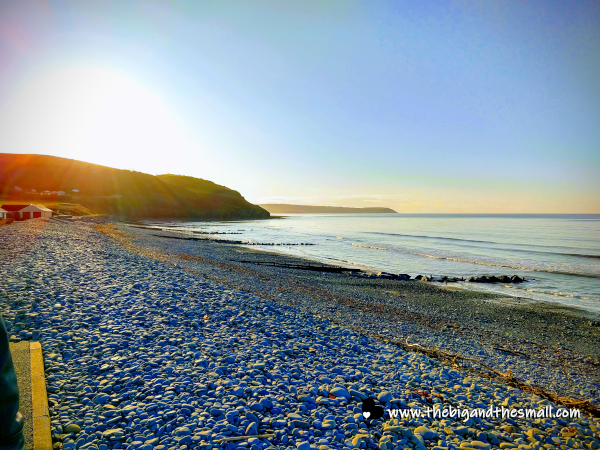 Perhaps the most interesting bit of information on the sign was only given one line when it really deserves much more. It simply said this: "There is a sunken kingdom called Cantre'r Gwaelod off the coast of Aberaeron - flooded because the gate keeper got drunk." What?! TELL ME MORE SIGN! Alas, it did not. So we did a quick Google search and learned that this legend is sometimes known as the "Welsh Atlantis" and has been featured in folklore, literature, and song. You can check out the Wikipedia page about it if you want to learn more.

After enjoying the view for a while longer it was time to head back home to let the dog out and enjoy the rest of our evening at home. We were grateful for the gorgeous day with the sun shining to explore these charming seaside towns!