We Made A Huge Mistake

Back in August, when we were in Bulgaria, I wrote this post about what it's like when a ton of little things go wrong while traveling. All of that is nothing compared to what went wrong last week when we were making our way from Chepstow, Wales to Carmarthen, Wales. What should have been a simple 4-hour coach journey with one changeover turned into a 12-hour overnight journey involving multiple coaches, a midnight walk through a city, and multiple train rides. Yeah, it was rough. 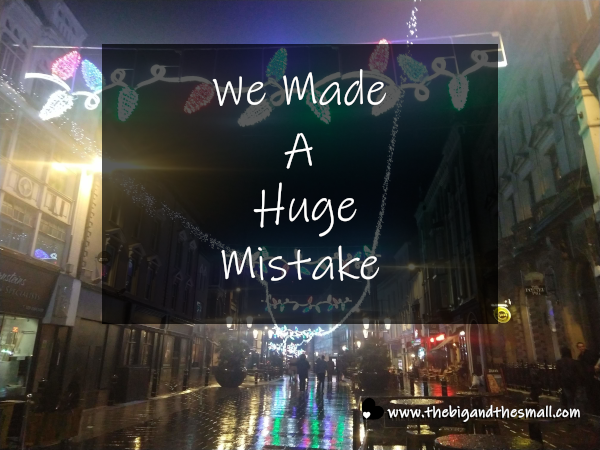 The day started out lovely with my trip to Tintern Abbey with Rachel. That afternoon she drove us to the bus station where we were supposed to catch the 3:45 bus from Chepstow to Cardiff. That ride should have taken about two hours to get to Cardiff where we would then have an hour-long "layover" before catching the 6:15 bus that would get us to Carmarthen at 8:25 pm where our new housesit hosts would then pick us up. Easy enough, right?

All seemed to start really well as when we walked up to the bus stop with all of our stuff the National Express bus was just pulling in. The sign on the bus said Cardiff via London which, in retrospect should have given us pause, but at the time I saw it said Cardiff so assumed it was the right bus. We showed our tickets to the driver who quickly glanced them over then waved us on. Joel asked him "Cardiff?" - as in "This bus is going to Cardiff, right?" - and the guy nodded, "Yeah, yeah, Cardiff and London." So we figured the bus was perhaps going to London after Cardiff.

The bus was the most crowded we have ever seen - there were exactly 3 seats left and at first, we didn't even get seats together. Joel asked someone if he would switch spots with me so we could be next to each other and the guy graciously agreed. Again, in retrospect, the crowded bus should have been a clue - would that many people really be going to Cardiff on a Friday afternoon? Turns out, no.

But y'all, it took us a long time to realize this. Looking back, we should have figured it out pretty quickly. In the moment, we did not realize we had gotten on the wrong bus until it was far too late. When the time ticked to ten minutes past what should have been our arrival time in Cardiff, I started to get nervous. Joel pulled up Google maps to see how far away we were and surprise! we were very far away. As in, we were about 5 miles from the heart of London which is in the complete opposite direction of Cardiff.

Joel immediately went up to talk to the driver who was like "Yeah mate, this bus goes to London! And then I'll go to Cardiff." Now, to be fair, we definitely hold some responsibility in this situation. We should have checked the bus closer, we should have paid attention to where it was heading at the beginning instead of just settling in with our phones and my Kindle. But also, the driver is at fault here as well. He should have looked at our tickets, realized we did not actually purchase tickets for his bus, and not let us on.

However, here we were, about to be in London when we were meant to be in Cardiff, and we had a problem to solve. Our first step was to message our new hosts and let them know we would be late. The second was to chat more with the driver about what we could do. He said that since he would be going from London to Cardiff that he would let us on to his next drive as long as it wasn't full. (Oh sure, now he's worried about actually having the right tickets.) We briefly considered renting a car (far too expensive) or taking the train straight from London (also more expensive) but in the end, we decided to stick with the bus.

We finally arrived at Victoria Station in London and we had to exit the bus with all of our stuff. The station was an absolute madhouse with tons of people waiting to catch buses to various places around the country. We waited for a little over an hour (the driver had to take a mandated by law 1 hour break) and then we had to figure out where his bus was going to load. It was a bit confusing and at one point there was a mad dash from one side of the station to the other, but in the end, we found it, the driver let us on the bus and we were finally on our way to Cardiff.

Now we still had to figure out how to get from Cardiff to Carmarthen. The next bus between the two wasn't until the next afternoon, which would get us to our housesit too late. We had been continually in touch with the homeowners and they found us the train schedule that would take us from Cardiff to Carmarthen. According to the driver we were supposed to arrive in Cardiff around 10:45 and the last train to Carmarthen was at 11:30 so it looked like things were going to line up just right.

But then. You know it wasn't that easy, right? Our bus was running late and the driver was kind of rubbish at estimating how long it would take him to get to Cardiff. There was some extra traffic leaving London. And then we pulled off the motorway to pick up passengers from another bus that had broken down on the side of the road. All that meant we arrived in Cardiff around midnight, completely missing the last train. We figured the next step was to get to the train station and we'd figure it out from there.

Of course, that wasn't easy either. It would be just too convenient for the bus stop and the train station to be the same place, right? Or even close to each other? Instead, the bus dropped us off in the middle of the city, at what wasn't really a station at all, but rather the middle of the bar district. It was midnight on a Friday so there were plenty of people about, in various states of intoxication, and we had to navigate the cold, rainy streets, with all of our luggage. Not my idea of a fun time. There were these Christmas lights, though, which was nice. 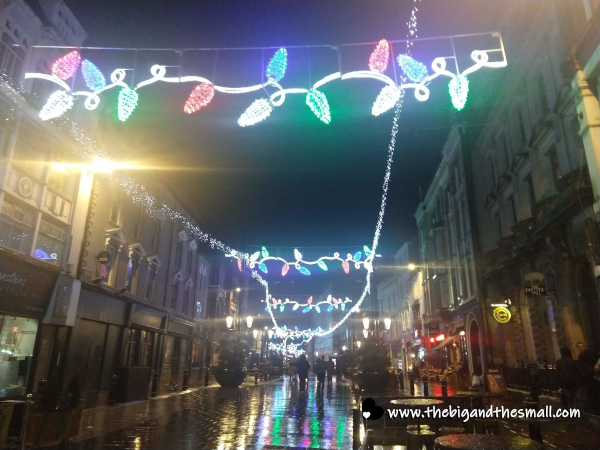 Our walk to the train station ended up taking about twenty minutes and involved several wrong turns as Google maps wasn't being it's most accurate. We finally found it and at least got out of the rain, though it was mostly open air so it wasn't any warmer. The next train directly to Carmarthen wasn't going to leave until 5:30. It was 12:45 am by now, so we resigned ourselves to sitting in the train station for the night.

Except, then at about 1:15 am a staff person informed us the train station was going to close at 1:30. There was currently a train in the station that was going to Swansea, and then we knew there was a train from Swansea to Carmarthen, so in the end, we decided to jump on that one. A guy on the train warned us that the Swansea station was also going to close overnight, but we figured at least this gave us an hour on a warm dry train which was better than nothing.

When we arrived in Swansea it was about 2:30 in the morning. We wandered out towards the exit (with the vague plan of walking half a mile to a 24 hour McDonald's) and asked a passing staff person if they were A. really closing and B. what time they would open again. He said, yes we are closing and we'll open at 3:30. Joel said, "Really? You're going to make us leave for an hour?" The guy took a good look at us, I think saw that I was on the verge of tears, and took pity on us. "No, you can stay here" and he gestured towards some nearby chairs before wandering away.

We settled in on the chairs and I took a few moments to dig out my shoes and socks and change out of my now soaked and freezing cold Rothy's. This part of the station was still open-air so while we were out of the rain it was still quite cold. But, it was better than having to walk in the rain with all of our stuff to McDonald's! About ten minutes later things got even better. Another staff person wandered out and asked if we would like to move to the official waiting room instead. Um, yes, please?

He took us over to a locked room, unlocked it and turned on the lights for us, and finally, we were in an enclosed heated space with plenty of seating. There were even outlets so we could charge our phones! It was now about 3 am so we settled in for another almost three-hour wait until the 5:45 train would finally take us to Carmarthen. The time passed ever so slowly, though I was grateful for the warmth, a bathroom, and my Kindle.

When our wait was finally over, things were pretty smooth sailing. We got on the train, rode it for about 40 minutes, and arrived in Carmarthen at 6:30 in the morning, only 10 hours later than we were supposed to arrive the night before. Our new host arrived around 7:15 and then it was a 45-minute drive to their house.

So, finally, after a ridiculously long, cold, wet, needlessly expensive journey (the train cost us an extra £50) we had arrived. Our hosts were incredibly warm and welcoming and we were grateful for their hospitality. They immediately offered tea (I love the British!) which was all I had been dreaming about through the long cold night. They also made us a delicious breakfast of fried eggs, toast, sausage, and bacon which was ever so tasty - and not just because I hadn't eaten anything since a bowl of soup at Rachel's the previous afternoon.

We spent some time with our hosts learning about the house and our new pet - a golden retriever named Eddy - and then it was off for a nap for us. It took us several days to fully recover and settle in here, but we are finally feeling normal again. I will share more about our new housesit later this week!

Until then, let me leave you with this lesson - always double, nay triple, check your tickets! Don't trust the bus driver to actually know where you should be heading. We feel like big doofuses having made this mistake but you better believe we will never make it again.