Walking through one ancient stone building with my new friend Rachel wasn't enough, so the day after visiting Chepstow Castle we headed off to see a Benedictine monastery that dates back to 1131. I'm pretty sure I still owe the blog a full post about this, but in the summer of 2009 I lived in a Benedictine monastery in Wisconson, so I was very excited to see one with such history! 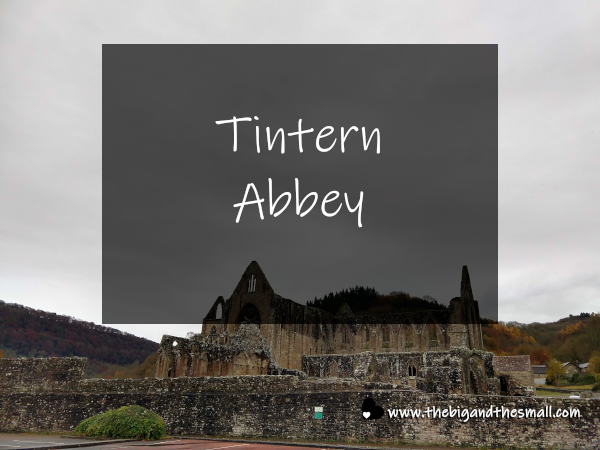 Tintern Abbey is located about a 15-minute drive from Chepstow and the drive itself is beautiful as the narrow road winds throughout the hills and forests. Eventually, the road opens up and the Abbey appears before you, nestled in the valley and, at this time of year at least, with a stunning backdrop of fiery trees. Again, the day was gray, gloomy, and rainy, but for me, that does almost nothing to dull the beauty of Wales. I'm sure this view would have been even more spectacular on a blue sky sunshiney day but I don't mind the rain. In any case, I definitely see why the monks chose to build their abbey here. 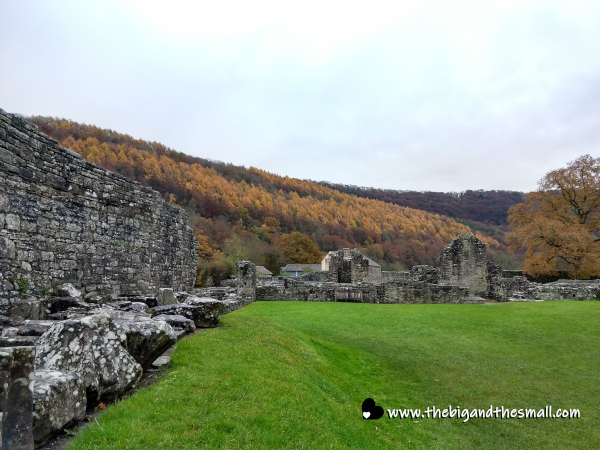 This particular monastery was part of the Cistercian Order - a reform group that attempted to return their practice to the original Rule of St. Benedict which they felt others had become too lax about. Their name came from their founding at Citeaux in 1098. They became known as "White Monks" because they wore garments of undyed wool. This order emphasized self-sufficiency through agricultural labor, keeping communities remote, and, apparently, "simplicity in their buildings." That last bit surprised me as I don't think I would label any part of this building "simple"! 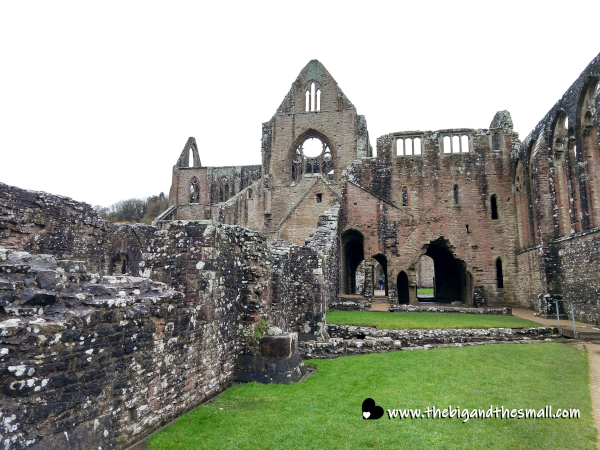 Despite the near-constant drizzle falling around us, Rachel and I enjoyed wandering around the abbey and learning about what life was like for the monks so many centuries ago. At one point we walked through a place labeled the "Warming House." Here we learned that a fire would have been lit and kept burning from the first of November through Good Friday every year. Remains of the central hearth and part of the chimney arrangement still survive. Archways to either side allowed the monks to huddle around all sides of the fire. Almost simultaneously Rachel and I both commented that we wished they had a fire burning there right then! 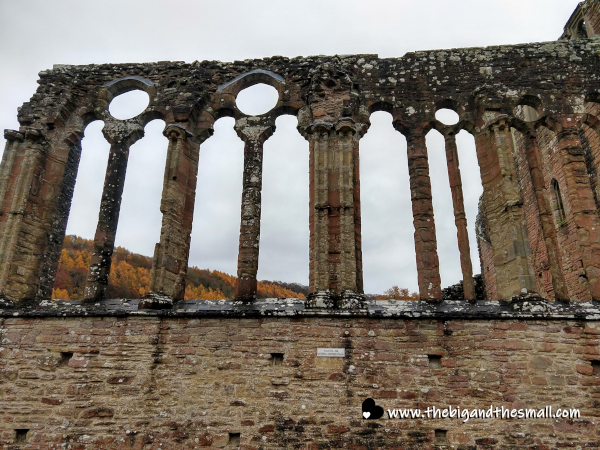 The western front of the abbey shows just how impressive and glorious it would have been in its heyday. This was completed in around 1300 in the "decorated" style and is a work of singular beauty, embodying some of the most fashionable architectural developments of the day. (Again, who would call this simple?!) The pointed-oval niche over the central doorways probably housed a carved figure of St. Mary, to whom all Cistercian churches were dedicated. 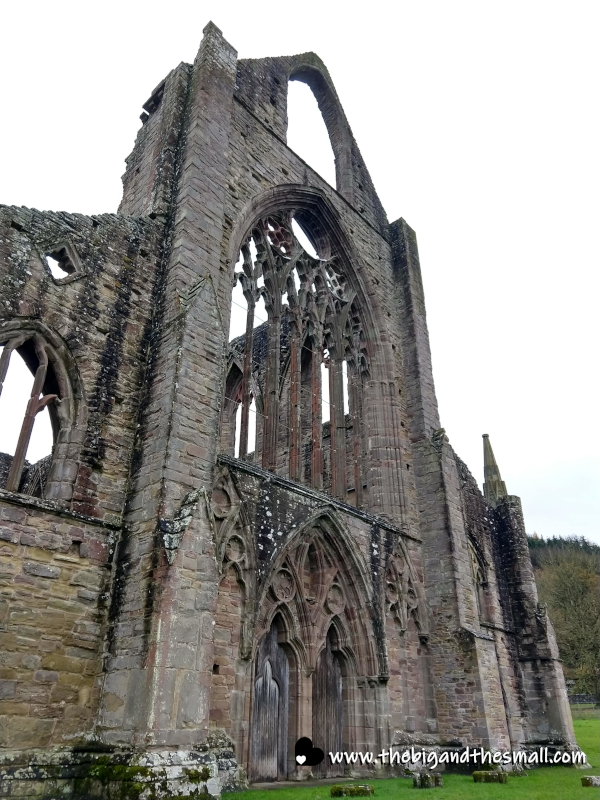 Here is a view of the doors from the inside. I should have put a person in the picture for scale but just know they are massive! I'm always fascinated by huge doors that have smaller doors cut out of them. Those smaller more manageable ones must have been the everyday doors. 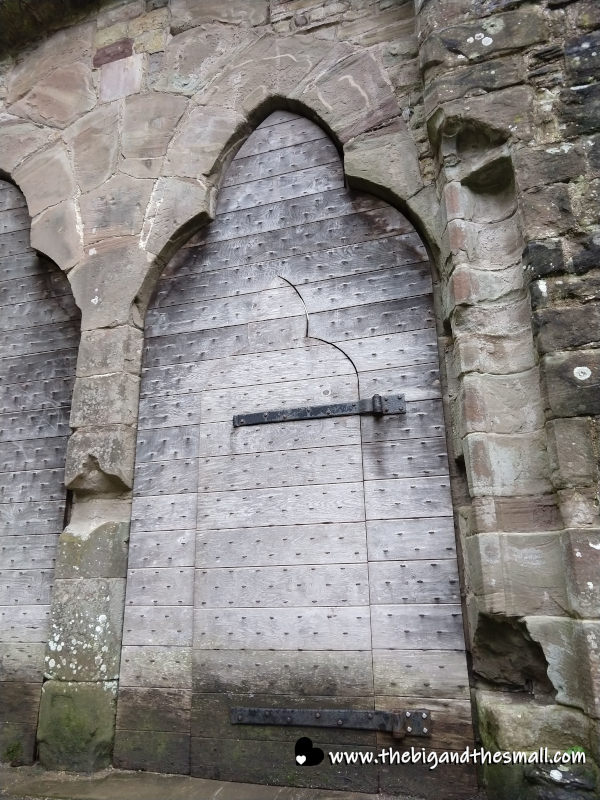 Walking through the central hall, where worship would have taken place, felt particularly poignant. What remains of the abbey is still absolutely incredible, especially considering how long it has been in disuse. After King Henry VIII severed links with Rome, he ordered the dissolution of all religious houses. Tintern's end came on September 3, 1536 - the property was seized and everything of value was removed. At the time the property was valued at £192  (which is approximately £125,000 today which still seems way too low.) With the lead gone from the roofs and its windows smashed, the shell of the abbey soon fell into decay and oblivion. 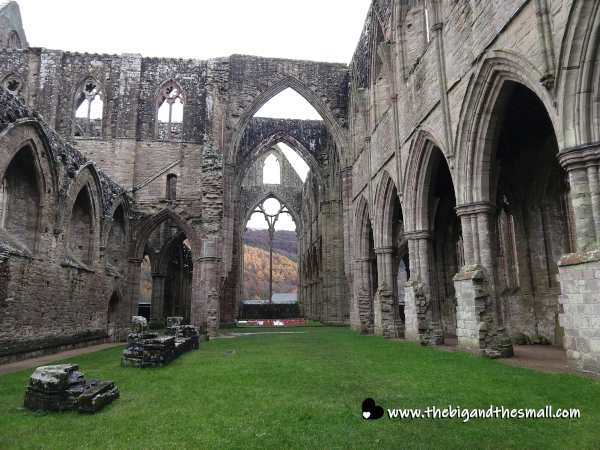 On the day we visited there was a display set up for Remembrance Day - these clay poppies were created by local residents and were available for sale with the proceeds divided between the Royal British Legion and the Monmouthshire District Scouts. There were 1560 poppies to represent the 1560 people from Monmouthshire county that have fallen in all conflicts. 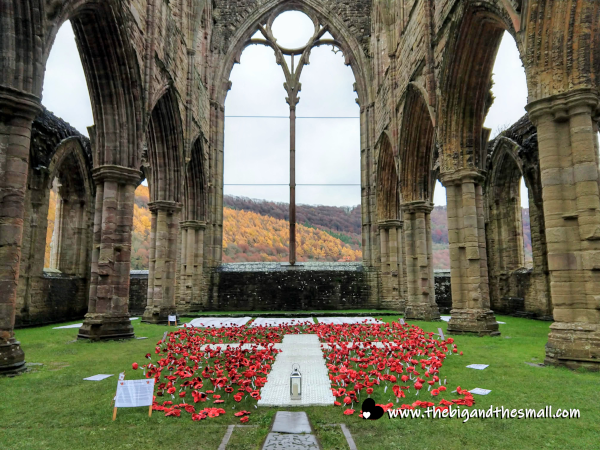 Certain areas of the abbey outside of the worship spaces have not stood the test of time quite as well. You can see the foundations of the buildings here that would have been outbuildings providing services such as the infirmary, the library, and more. 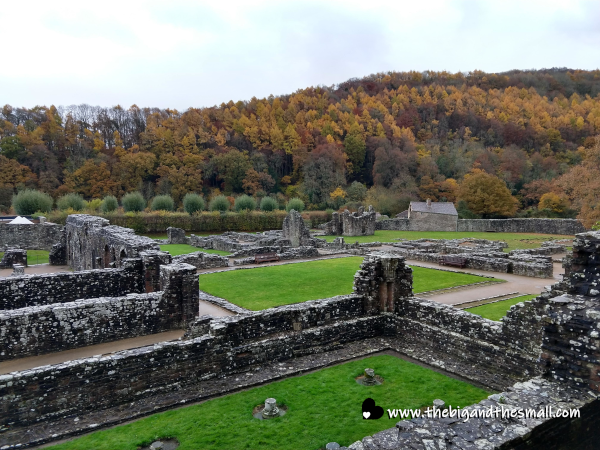 While the abbey languished in disrepair for centuries after its forced closure, it became fashionable with tourists again in the 1780s. Tourists who traveled along the River Wye enjoyed stopping to tour such ruins and it became ever more popular with travellers and artists. Towards 1900 there was a shift to more scientific study of ruins which eventually led to investigation and conservation of the site. 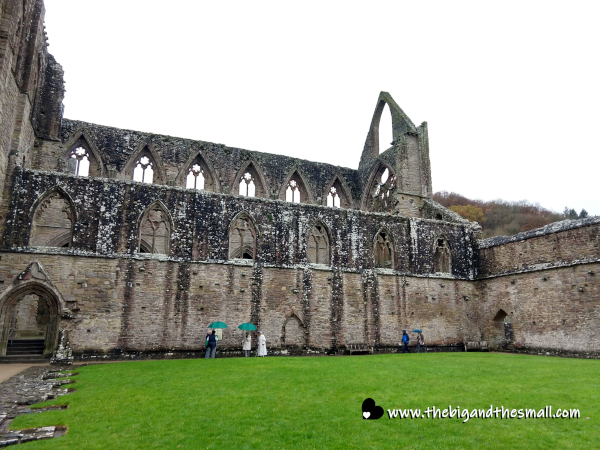 The pictures hardly do justice to the majestic beauty that is the abbey. If you ever find yourself in the area it is definitely worth a visit!