Y'all, it's time I come clean about something.

I know, I know, who doesn't like the beach?

For most people, a day at the beach, or a whole vacation centered around going to the beach is a beautiful thing. I've always liked the idea of it in theory. My experience with beaches throughout most of my life has been rare enough that the theory has held up - I thought beaches were great! Sun! Sand! A cold drink in my hand! What's not to love? 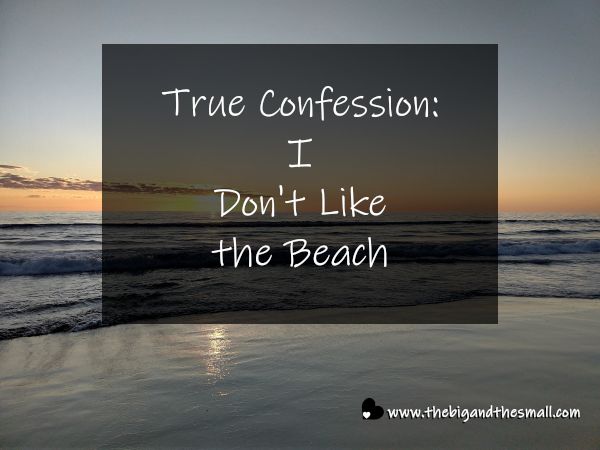 Turns out, there's a lot not to love. As I've binged on beaches in the last few months - between Thailand, Australia, and Bali, I have come to realize the cold hard truth - I do not like the beach.

Also, I get it, this a very first-world problem. But allow me to vent for a minute. Here's what I don't like about the beach.

Sand gets everywhere.
I mean, everywhere. Sand is like the glitter of the natural world. And we all know that glitter is just the herpes of the craft world. A bit crass, but you know what I mean, right? It gets everywhere and it's really hard to get rid of! Ugh, it's the worst.

Beaches are hot.
Okay, I realize that not all beaches are hot. But for the sake of argument, you know what I mean. People love going to the beach in summer and summer is my least favorite season. I hate being hot, sweaty, getting sunscreen in my eyes when it inevitably drips down my face. It's all just the worst. I think I'm extra salty about this right now because we moved to Australia at what should have been the beginning of fall but what was really the beginning of summer here which means I skipped my favorite season so experience my least favorite one twice. Whoops.

The ocean is a giant fish toilet.
I can't take credit for this hilarious joke, it's actually a line said by Schmidt on the TV show New Girl. (The scene is super hilarious but try as I might I could not find a clip of it on YouTube. Get on that, internet!) I mean, think about all of the creatures that call the ocean home and all that entails. I realize most of you probably think this is part of what makes the ocean beautiful and magical but I'm with Schmidt on this one. I don't want to swim in a fish toilet.

Beaches at lakes/rivers don't get a pass.
The water at a lake or a river might be less dangerous when it comes to creatures of the depths or riptides, but I still don't like that you can't see the bottom of the water. If you start struggling or drowning, once you are under that water no one can see you!

For the most part, I can just totally pass on the beach. Give me a ski lodge in the mountains in the middle of winter any day.

So what about you? Are you a beach or a mountain person? The ocean or a pool? Or both? Or neither? We all have different things that make us happy!