Our time in Australia has been spent in Perth, Western Australia. This area is growing and as such the housing market is booming. Everywhere we drive there are new neighborhoods being built and two of the three homes we've stayed in were built in the last three years. There are billboards and ads everywhere about buying land and building a custom home - including on my Facebook feed as soon as the internet overlords figured out where I am!

I love seeing different homes and how people live and always enjoyed going to open houses with my mom when I was growing up. So imagine my delight Elaine and I came across a model home neighborhood we could tour! We went through a half a dozen houses and I noticed some consistent trends that are different from what I am used to in the US and what I saw in the UK. 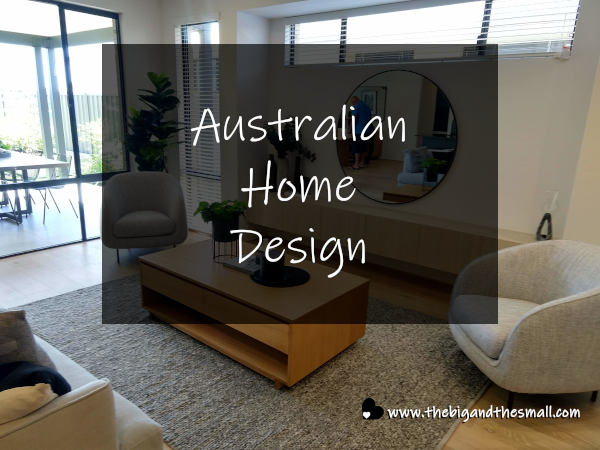 2. Open floor plans are all the rage
When we visited show homes in the UK not even the brand new builds utilized the open concept floor plan. (And the older ones definitely didn't.) Here, every single house has been an open concept plan. I used to love open floor plans...but the more I live with them the less I like them. I have determined that if I'm going to live in an open floor plan, I want to be able to see the TV in the living room from the kitchen. Some of the floor plans, while open, don't have that visibility. Which to me seems like the worst of both worlds - you are connected to the living room so you can't do your own thing in the kitchen (listen to a podcast, watch your own TV, etc.) but you can't really enjoy what people in the living room are enjoying. Another downside to the open floor plan? If your kitchen is a mess, you can't hide it! 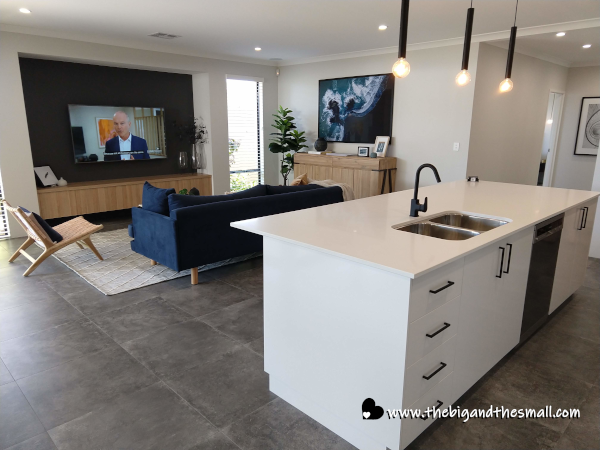 3. New kitchens all have a scullery
That said...the Australians have figured out a hack for that! Most of the open kitchens also have something called a scullery - a little room off the kitchen for more storage, prep space, and sometimes even the sink. Some sculleries were basically just really fancy pantries - though I must say I would love to have this kind of kitchen in my house. 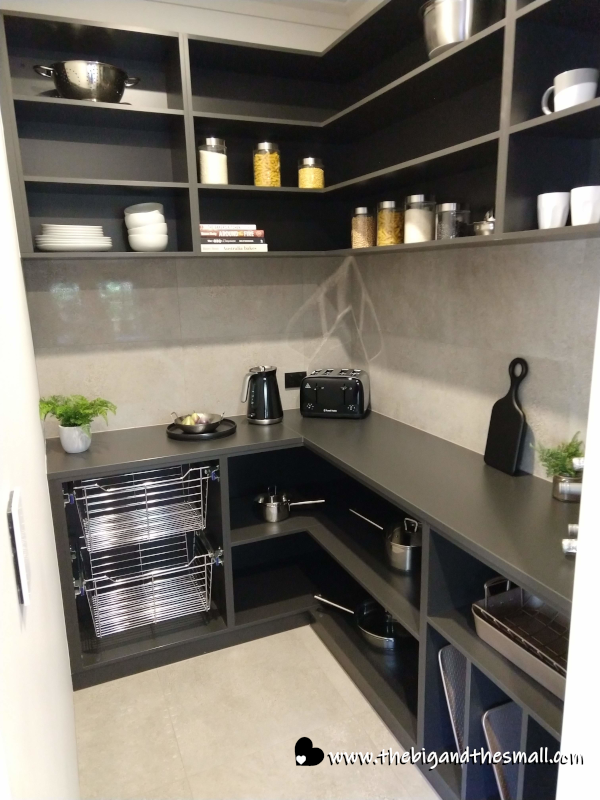 Others were basically an extension of the kitchen where you could hide all of the dishes. These designs usually had a small "prep sink" in the island but the main sink was off to the side. The benefit of this is that you can stack all the dirty dishes in the sink you want and most visitors to your home are never going to see it. I honestly can't decide if I like this design element or not. 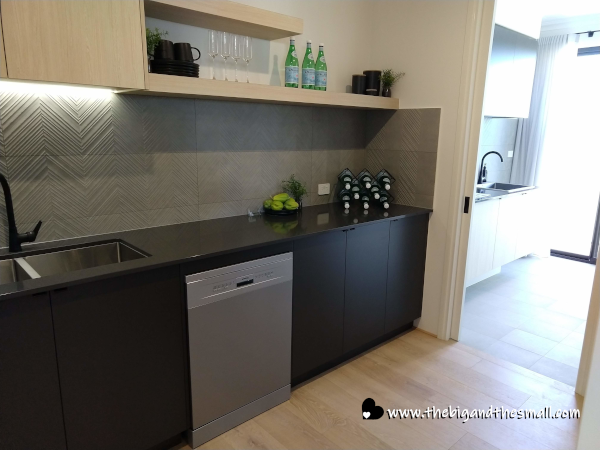 4. The open floor plans continue with open closets
I did not see the design feature in any of the homes we actually stayed in, but it was all the rage in the model homes. Sometimes the closets were at least around a corner so they were somewhat hidden even if they didn't have a door. Others, like this one, were fully open! While these closets with their perfect organization systems look fabulous when staged...I'm guessing this doesn't hold up so well in real life. I like an organized closet as much as the next gal but I still don't want everything in it on display. I just don't get it. 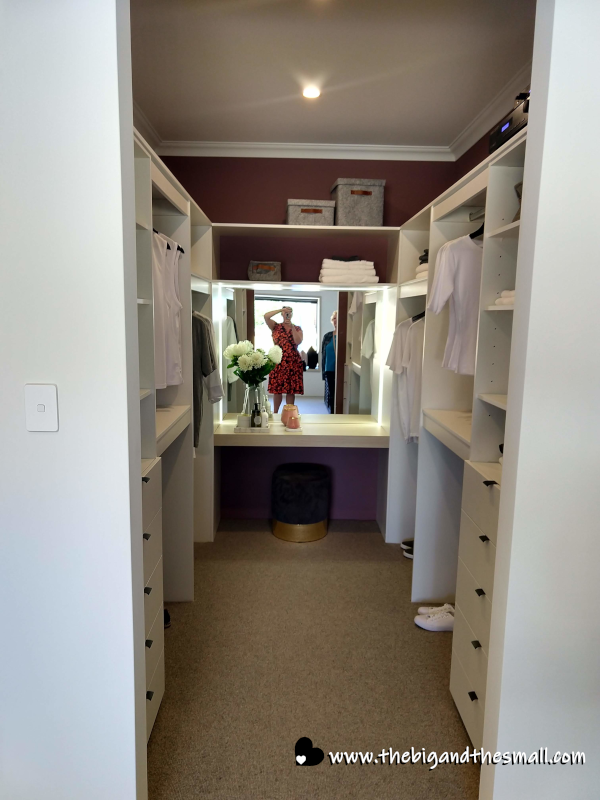 5. They even go as far as open plan bathrooms!
Speaking of things I don't want on display...the bathroom! Seriously!? I was literally shocked when I saw this design - it was in at least two of the show homes so it's not like it was some random one-off. I just don't get it. That bathtub looks lovely, but also, like, wouldn't it be cold? Also, this design was exclusively located in master bedrooms which really makes no sense to me. Assuming there are two people sharing this room, the open bathrooms really seems terrible. If one spouse gets up for work before the other one, there is no getting ready quietly and without disturbing the sleeping spouse. As soon as you turn a light on or do anything everyone in the room is awake. This design choice is a hard no for me. 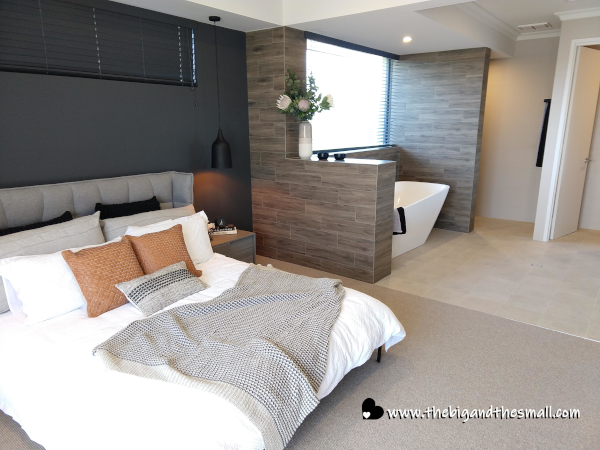 6. Most homes had a media/theater room
This seemed to be practically a standard design in most of the show homes. They ranged from being basically an extra living room used exclusively for watching TV, to being more of a true theater room complete with stadium-style seating. I am totally on board with this home design element and would absolutely include one if I ever built a new house. Elaine, on the other hand, took what was supposed to be the theater room in her home and turned it into an extra-large master bedroom walk-in closet! 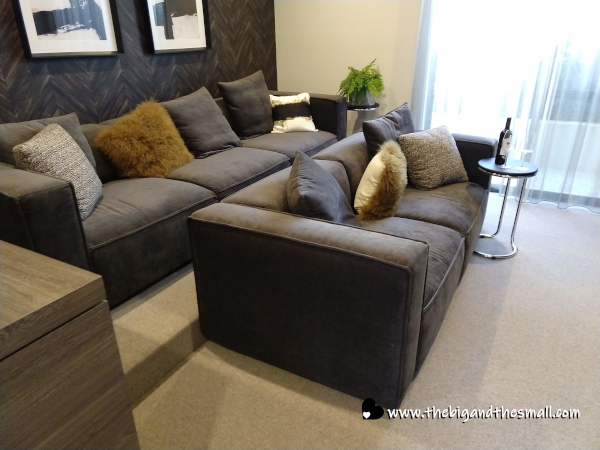 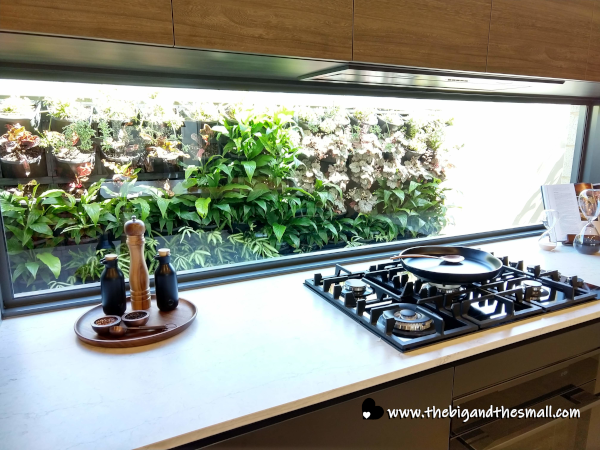 8. Alfresco spaces combine indoor/outdoor living
The weather in Australia is conducive to being outside most of the year (if you don't mind the heat) so all new builds really combine indoor/outdoor living with what they call "alfresco" spaces. I'm all for a spacious covered patio that connects to my kitchen. However, if I lived here, I don't think I would take advantage of it all that often because of one thing - the flies! They are particularly bad in our current area, though they are better near the coast. I think they could really benefit from the screened-in backyards I've seen often seen in Florida - that way you can take advantage of being outside without the bugs! 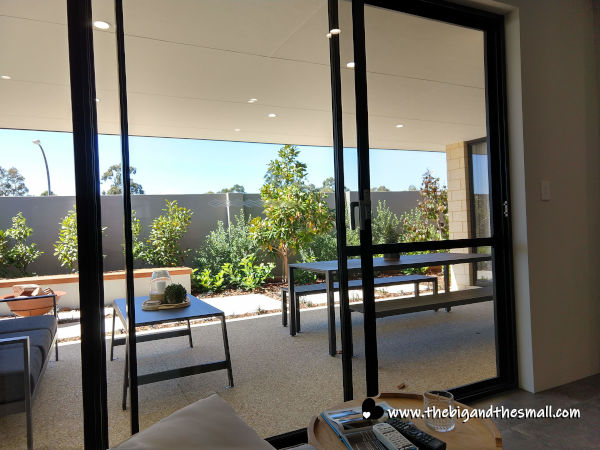 9. Random fact: light switches are opposite
I'm not sure this one is so much design-related as just a weird quirk of Australia. In most places, you flick a light switch up to turn the lights on, and down to turn them off. Here in Australia, it's the exact opposite! It's not super weird but it does take some getting used to.

Some of these design elements are likely to be popular in the States with new builds as well, but I was surprised at how consistent and near-universal they seem to be here. I wonder if other areas of Australia are similar or if these are just Western Australia or even just Perth suburb trends. I guess someday I'll have to keep traveling to find out!

Open concept bathroom... HA! That one made me laugh. I agree that one is a hard pass. Other cons that crossed my mind with that one - let's make the bedding humid, that's good.

Kitchen design - I'm torn on liking the idea of a scullery and just wishing that it were all part of the same space. I could see it as useful but at the same time, why not just have it be together? I think I'd have to live with it in action to make a decision about it. A big kitchen trend in the US is no upper cabinets at all and while I can give that it is ascetically appealing, functionally, I want that space to tuck away kitchen goodies (same with open shelving - I want to close cabinet doors, my dishes are not all pretty, I like the minimalistic clean slate).

Ooh that's one I didn't catch - getting moisture in the rest of the bedroom! Such a silly design concept. I can see it for a high-end hotel room as it might be a fun novelty every now and then, but definitely not in a home.

I am also torn about the scullery and think living with it for a while would help me decide if I like it or not. I am definitely anti open shelving - the dusting! Just, why?! And I neeeed upper cabinets. Maybe it's because my back often hurts but I hate having to bend down to get my everyday items in the kitchen.