Part of the fun of traveling to a new country is trying new food, right? When we are housesitting we don't usually eat out very much as we have access to a kitchen and cooking/eating at home is a great way to stick to a small budget. However, for our trip to Bali, we knew we would be eating out for dinner every day (after having brunch at the hotel.) Luckily we had a ton of restaurants to choose from within mere seconds of our hotel! 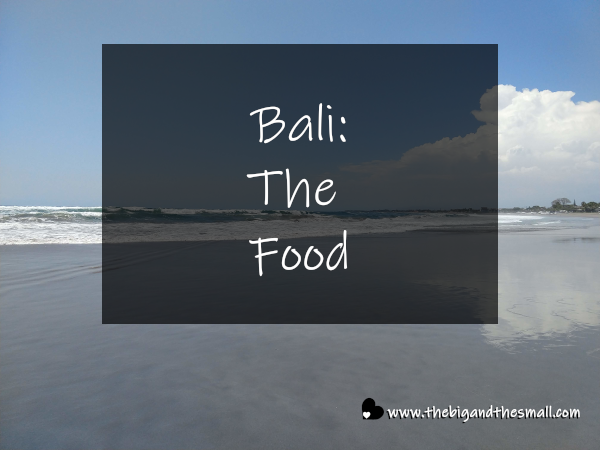 On our first night in Bali, we landed around 9:15 and made it to our hotel around 10 pm. We don't usually eat that late at night but after a long afternoon and evening of travel, we were starving! We headed around the corner to a place called The Crackling Pig. Since it was so late we decided to split an entree, and we went with something that was indicated on the menu as a specialty of the restaurant - pork belly. If you've never had pork belly before (Joel hadn't) it's kind of like an extremely rich, incredibly flavorful bacon. This iteration of it was crispy on the first bite then melted in my mouth. It was served with creamy mashed potatoes, a gravy-like broth, and some cracking pig (aka pork rinds.) It was delicious! 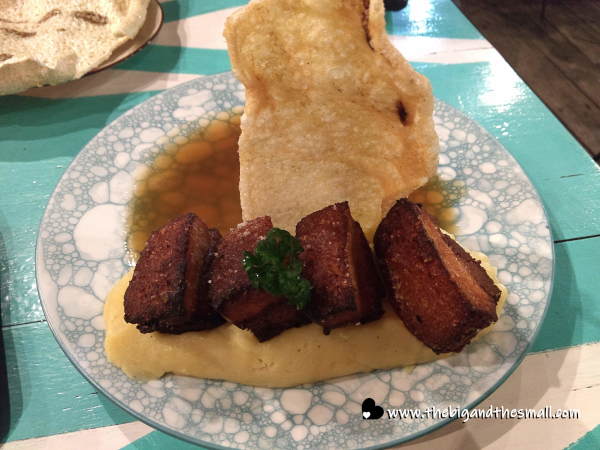 For dessert, we chose the red velvet lava cake. I'm a big fan of chocolate lava cake but this is the first time I have encountered a red velvet version. While we were still at the table I was googling recipes so I could recreate this at home again someday - I knew I would need to eat it again! I think it was actually a tad undercooked, even for a lava cake, as there was a lot more lava than cake. Tasty, nonetheless. 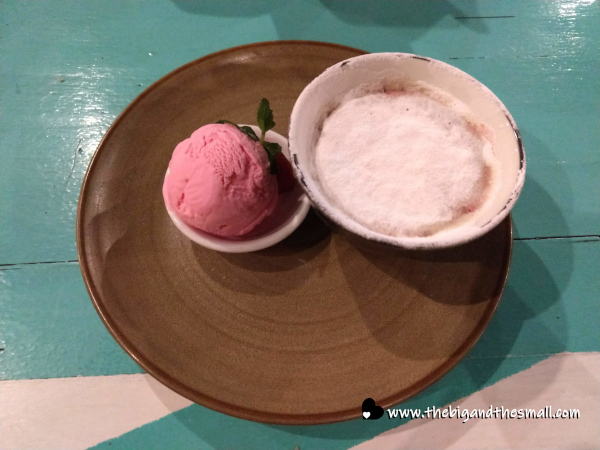 It might seem a bit weird to go all the way to Bali to eat Mexican food but what I can say, I love Mexican food! This place was right next door to the hotel and had good reviews online, not to mention it was really affordable - so I couldn't resist. We started with the chips and dip appetizer - it was about $3.50 for chips with guacamole, salsa, and pico de gallo. The chips were not great, a bit stale, though still edible. The dips were all fantastic and I wish the chips had been better so I could have enjoyed them even more. 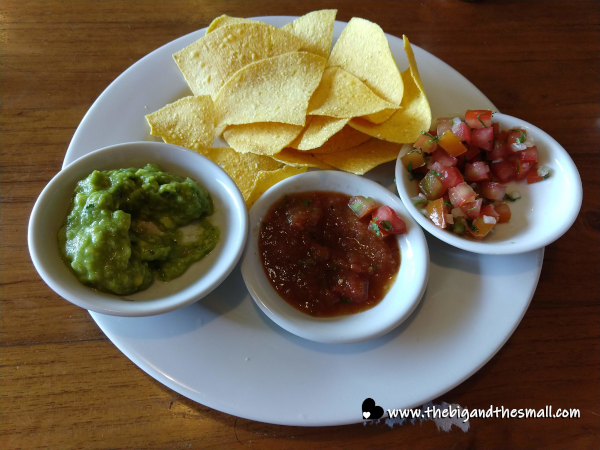 For my meal, I went with something called the "wet burrito." Not the most appetizing name in the world, I'll grant you, but luckily it tasted better than it sounds! This humongous burrito was filled with rice, black beans, lettuce, tomato, cheese, and a generous amount of seasoned steak. The whole thing was then smothered in enchilada sauce (thus the "wet".) It was so good I actually ate it twice during our 4 days in Bali! 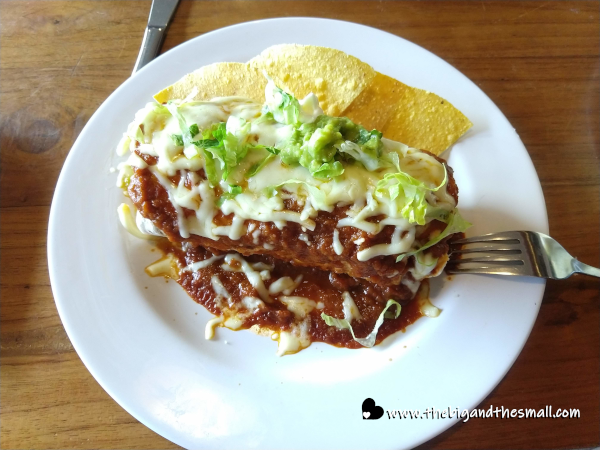 Joel went with the chicken taco salad which was as good as any taco salad - lettuce, tomato, your typical toppings, etc. One thing set it apart, however, a Ginger Lime dressing that was served on the side. I am not a fan of ginger in general but that dressing was so good I will be looking for something similar in the future! I usually just top my homemade taco salads with hot sauce but this has me changing my tune. 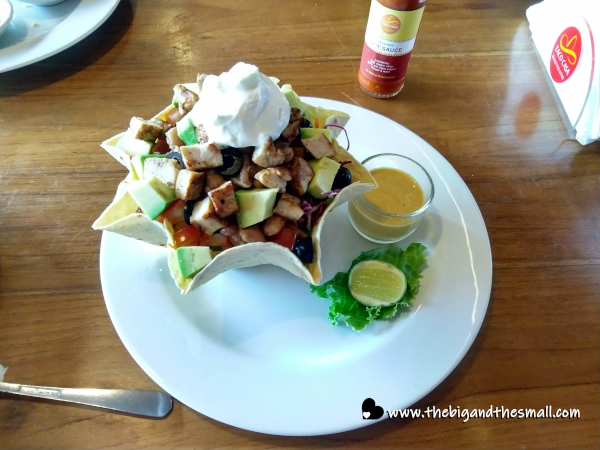 Dessert was this unappetizing looking black rice pudding, but have no fear, it tasted better than it looks! I'm not a big fan of rice pudding but this was tasty. Joel, who loves rice pudding, really enjoyed this one. 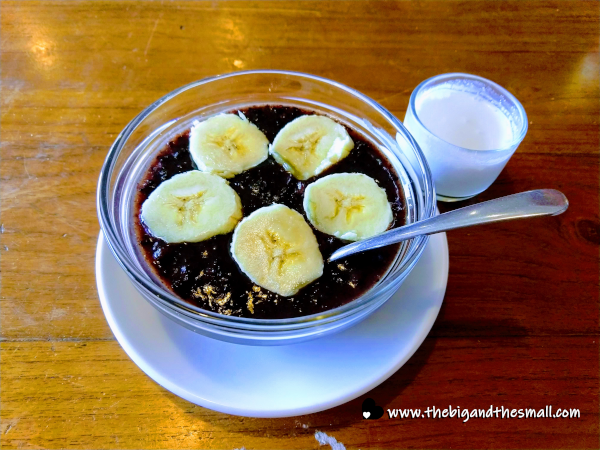 This restaurant drew us in with a sign outside claiming they had the best crispy duck in Bali! While I think we might have had a bit of an Elf situation on our hands, we decided to give it a try. It was hot outside so when we first sat down they talked us into trying a coconut drink to cool down.  Joel was super excited to try what turned out to be an actual coconut with a straw stuck in it. Turns out that is not as delicious as it sounds. Perhaps if the liquid had been cold it might have been more refreshing? As it was the liquid was lukewarm and there was a bit of a slimy texture. 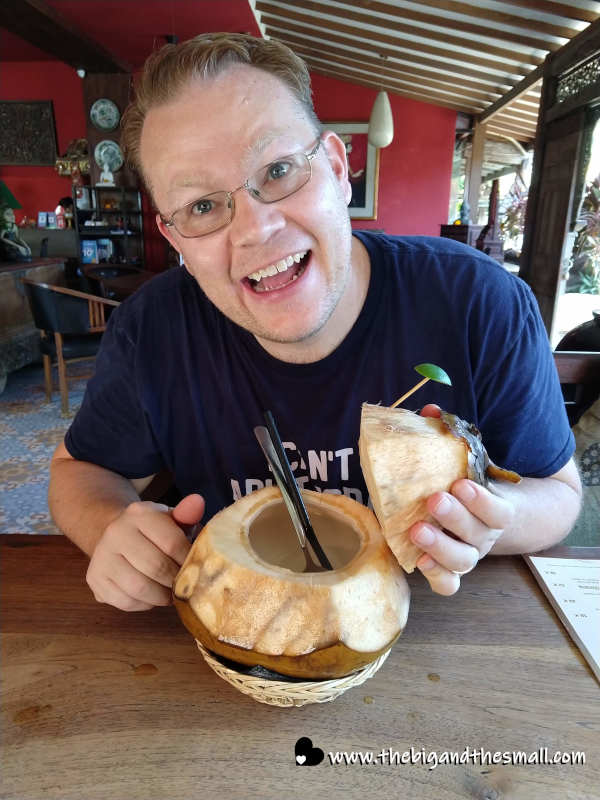 We obviously had to try the crispy duck, which came with rice, a veggie mix, and three different types of hot chili oil. As much as we were looking forward to the crispy duck, it was the least interesting thing out of everything we ordered. Joel said it was just "more expensive chicken." (Though, to be fair, the prices here were exceedingly reasonable.) 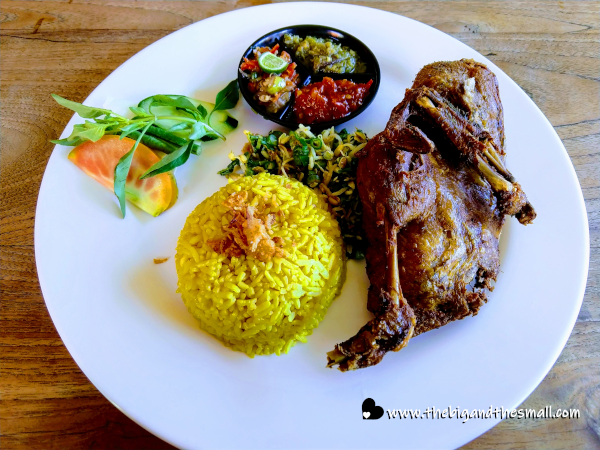 The real star of the show was my entree which consisted of balinese rijsttafel, chicken, sate lilit, pindang egg, urap-urap, peanut, and pelalah chicken. I didn't know what half of that was but the picture on the menu looked good so I took a chance. I'm glad I did because everything on this plate was exceedingly delicious - especially when I enhanced it with some of the chili oil from the crispy duck plate. The best thing was the chicken on the stick! 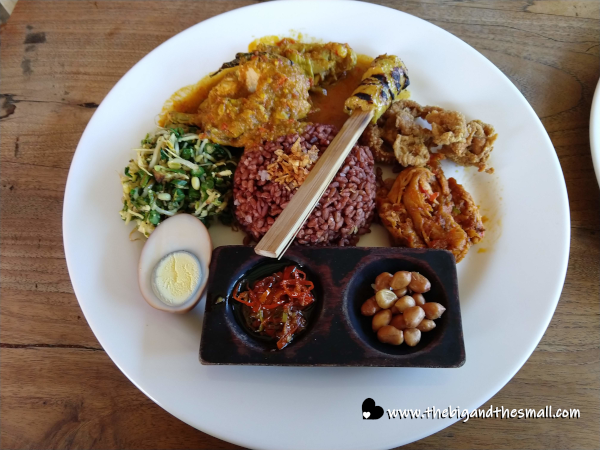 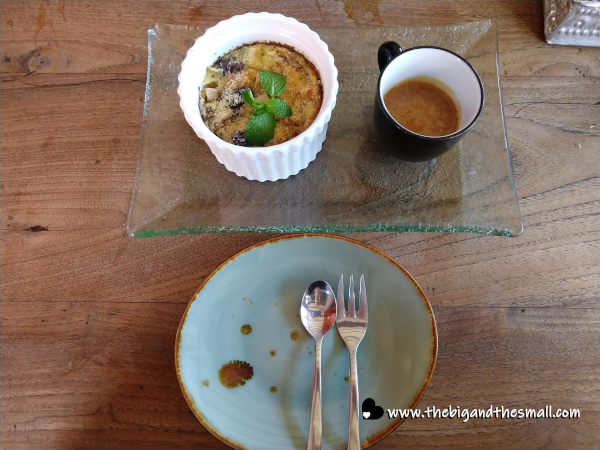 I am not a fan of seafood so it should come as no surprise that a sushi restaurant is not exactly my first choice of places to eat. Joel, however, loves seafood, in particular, sushi, so when we saw how affordable it was here he couldn't resist. He actually ate here three times over the course of our trip! On our last day, it was a welcome respite from the blazing sun outside - as one of the only closed in restaurants we enjoyed the crisp, clean interior and the strong air conditioning. We also enjoyed that the sushi chefs worked in an open kitchen in the middle of the dining room so you could watch the masters at work! 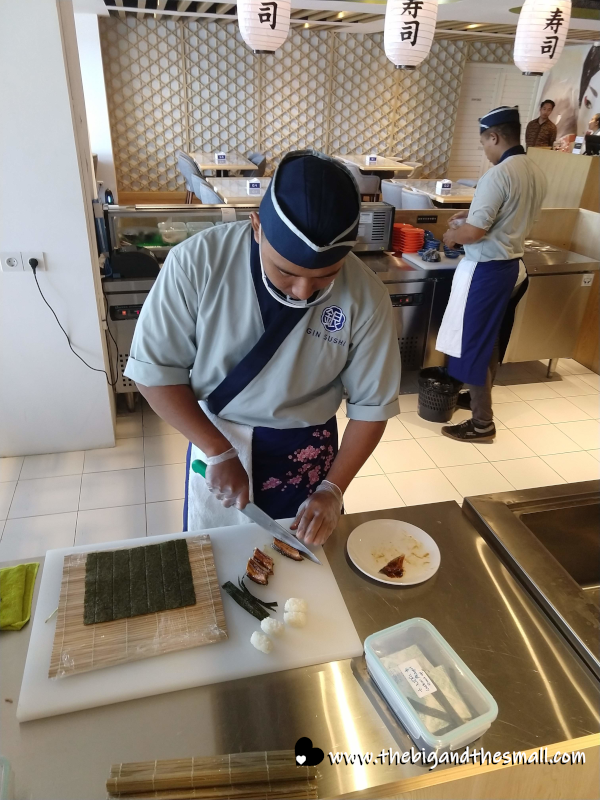 Joel tried several different kinds of sushi there but his favorite was this plate - called "Rocket Sushi." 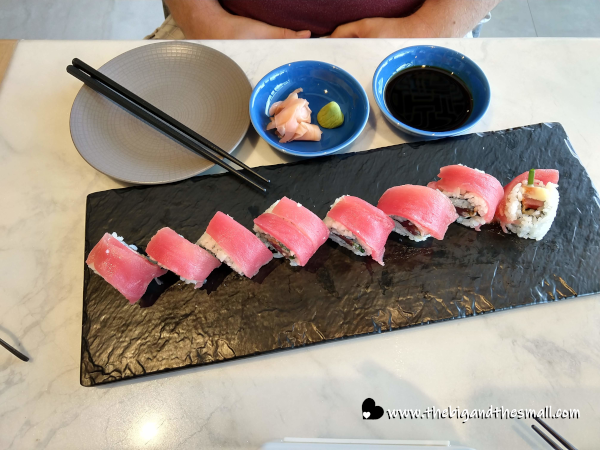 I was grateful to discover they had some non-seafood options available so I went with the chicken skewers. The chicken was incredibly tender and the sauce that came with them was so good I almost drank it when my chicken was gone. 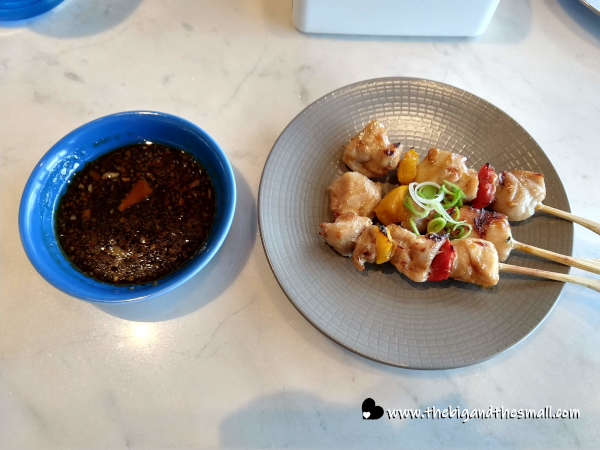 I also tried a strawberry smoothie and while the smoothie was just okay, I was impressed that it was served with a metal/reusable straw! Way to be sustainable! 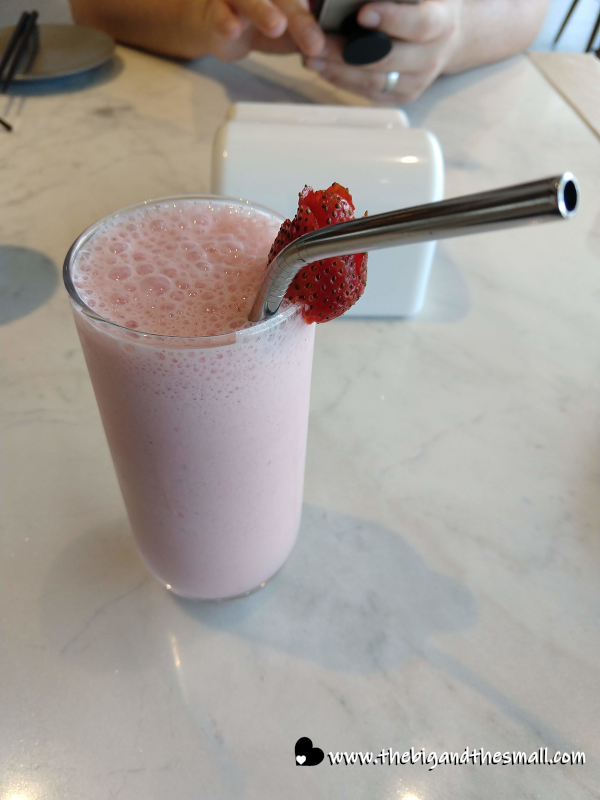 While eating out in Bali wasn't quite as cheap as Sofia, it was still very affordable and quite good. The restaurant options around us were endless and there were more places we wanted to try that we just didn't get to in our short time. Although, I still think eating that burrito twice was worth it.