I promised to talk about all things Bali - the big, the small, and the mini! So today I'm here to share what might be the most creative and exciting mini-golf course I have ever played in my life. We are big fans of mini-golf and tend to play whenever we get a chance - which so far has meant playing in Germany, two different places in England, Australia, and now Bali! (In case you are curious, Joel has won every single game of mini golf we have ever played together.) 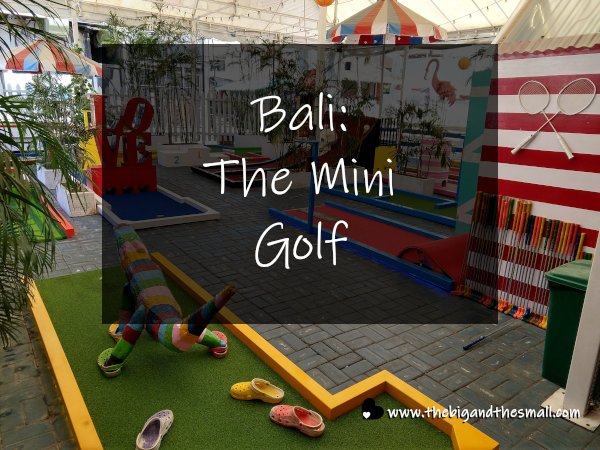 We did not set out to play mini-golf in Bali, rather we discovered this place purely by accident as we wandered around the area near our hotel. When I spied a sign for mini-golf that only cost 30K per person (that's a little over $2 each) there was no question about what we were going to do with our time. We immediately crossed the street (no small feat!) and paid for our game. It was hot and humid outside, but thankfully the mini-golf course was covered so we didn't have the sun beating directly down on us, and there were a few fans making a feeble attempt to get the heavy air moving. This course had 14 holes and not a single one was ordinary or boring. I'm going to share my 6 favorite ones! Yes, I literally could not narrow it down more than that.

I had a soft spot for this hole from the start as the skulls gave me a real Halloween-vibe. It was a pretty easy hole to shoot - as long as you gave your ball enough power to get up and over that curve at the top it would settle very close to the hole - making it an easy two shot. After we both completed the hole this way Joel discovered something else - if you hit the ball so that it went into the biggest skull in the middle, you were guaranteed a hole in one! From there it went into a chute that was in that black divider in the center, then came out right at the hole. I don't think anyone would know to do that unless they really studied the hole beforehand or got lucky. I loved hidden gems like that! 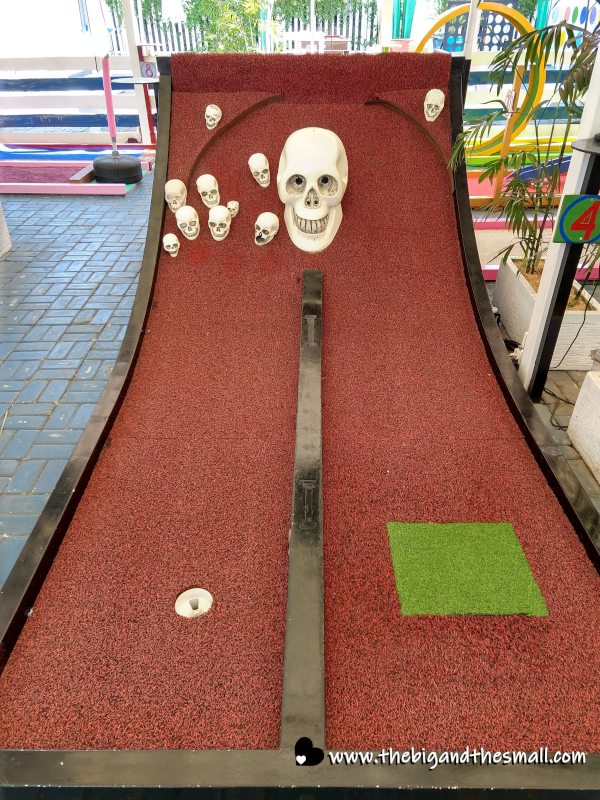 I'd be hard-pressed to name a favorite on this course, but if you absolutely made me, it would be this one. I have never in my life seen a hole like this - it was made out of a pool table! You literally had to climb the steps to stand on the pool table to take the first shot! Depending on which pocket your ball went into it landed at a different place on the green below, where you had to climb down to complete the hole. I got such a kick out of this even if I was a bit worried about the sturdiness of the table at first. 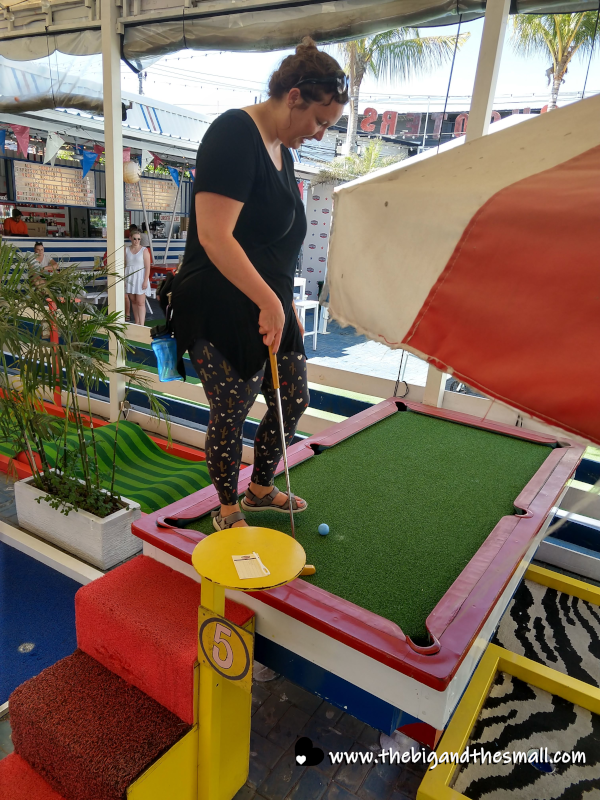 File this one under another style I've never seen before. Instead of a traditional putt to start off the course, you place the ball in the catapult and throw it at the angry birds! You could also purposely go short so the ball would just land on the green near the hole, so Joel and I made a house rule that if you didn't get it to hit one of the birds first you had to add a penalty stroke to your score. The actual "green" on this one was more like a shag carpet which was a bit weird but it was a fun and creative hole nonetheless! 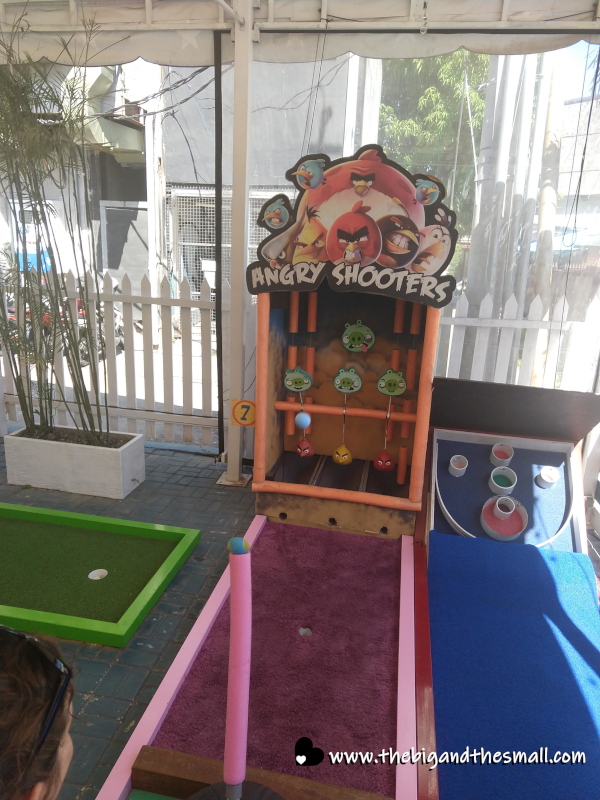 We have seen a skee ball type hole before (check out the Germany post) but this one had a twist that took us a minute to comprehend. When you got the ball in one of the skee ball holes, that was it. They didn't send the ball through anywhere to get to the actual hole. Each skee ball hole was labeled with a number from 0 to -3. Whichever hole you landed in, that was your score for that hole! I landed in the -2 so I subtracted 2 from my total so far. I have never seen this on a course before and I thought it was a brilliant idea! 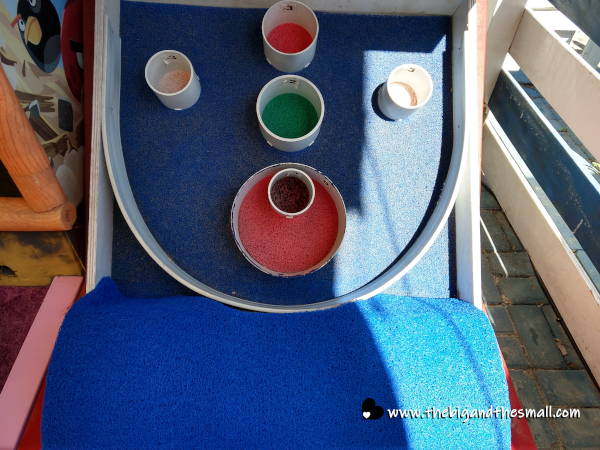 This hole was one that was cooler in theory than in execution. If you wanted to bypass the fun you could simply hit the ball to the left and around the corner to get to the hole. We, of course, wanted to use the contraption, so we hit our balls straight up the ramp and into the machine. While each of our first hits were perfect, the machine was not. One ball fell out of the bucket, one somehow made the machine go the wrong way which dumped another ball out, it was all very confusing. We had to get an employee over to get the thing working right. When working properly, a straight hit into the machine guaranteed a hole-in-one after the ball went through the whole shebang so that's the score we gave ourselves in the end. 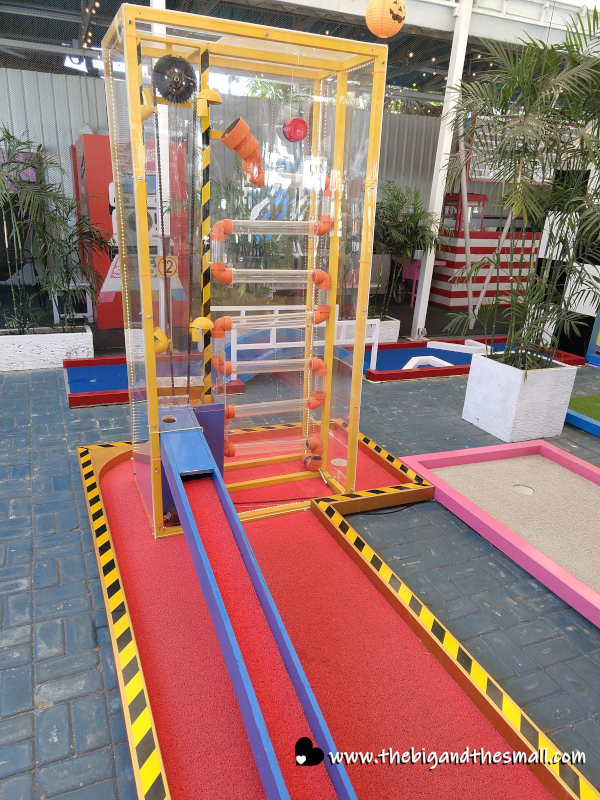 This was the final hole on the course and involved an actual toilet. You had to hit the ball hard enough to catch air on the ramp and fly into the toilet bowl. If you missed, the ball landed in a no-man's zone that would require an extra stroke just to get back to the start. We gave ourselves some extra grace on this one. Joel thought it was going to be really easy at first, but it took some finesse to get just the right amount of power on the ball! 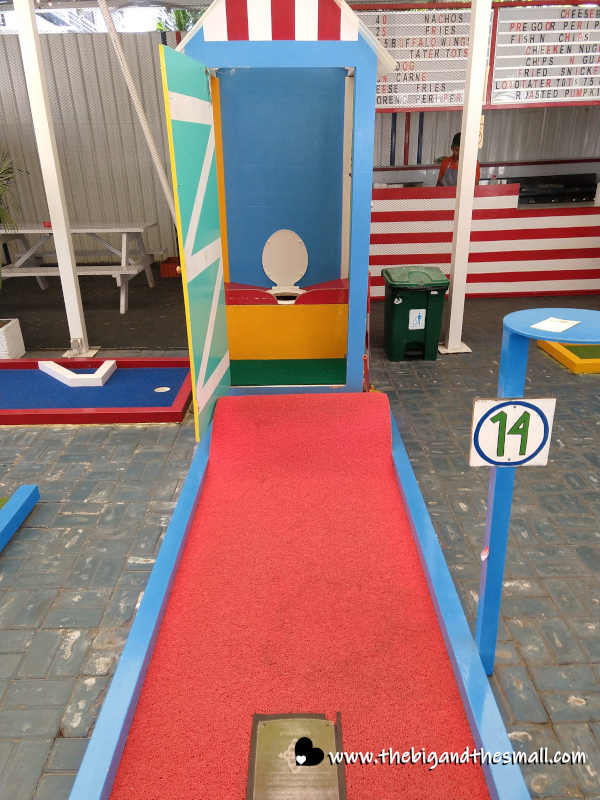 This game of mini-golf was so fun and so inexpensive we had plans to return and play it the next day. However, I ended up knocked down with a cold and did not feel up to leaving the sanctuary of our air-conditioned room so we never got around to it. I firmly believe that given a second chance I would have beat Joel at this course, but alas, we shall never know.

If you ever find yourself in Seminyak, Bali, the place is called Shooters and I highly recommend getting in a round or two!