McDonald's Around the World: Perth, Australia

American restaurant chains abound in Australia - within walking distance of our current place we can get to a Pizza Hut, Subway, KFC, Burger King (though it's actually called "Hungry Jack's" here it's the same thing) and, of course, McDonald's. We've had plenty of chances to eat at the golden arches during our time in Perth so far, but we finally took the plunge earlier this week! 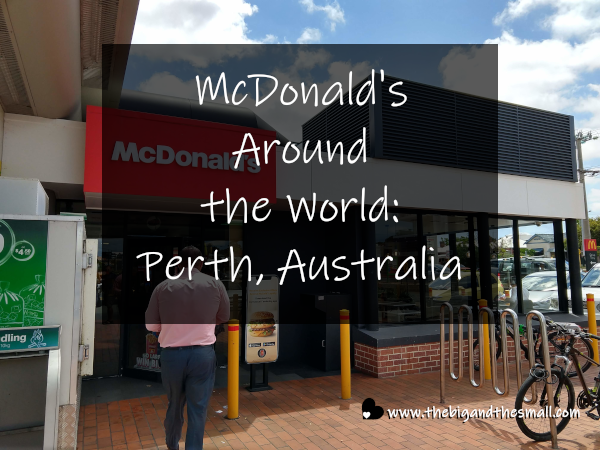 While our last visit to a McDonald's in Kuala Lumpur meant experiencing things very different from what we are used to from McDonald's, here in Australia it felt much more like any one that could be found back home. If you blindfolded me and dropped me in the middle of this restaurant I don't think there is anything that could have clued me into the fact that I wasn't in the US. They even had the Monopoly game going on! Of course, I'd figure it out once I heard someone speak with that distinctive Australia accent. 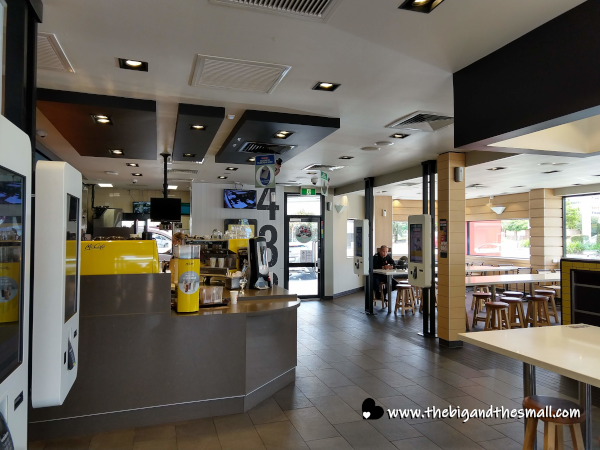 We always look for something unique to try, and while all of the menu items here were familiar to us, there was one big difference. Everything was bigger! McDonald's has a bad rap for being unhealthy, and after the movie Supersize Me revealed some things and the healthy eating movement took off in the States, McDonald's there made some changes. Supersizing is not an option anymore so food comes in slightly more sensible portions. We were very surprised to see that here we could order a variety of sandwiches doubled - look at this choice of a double McChicken or a double Filet O'Fish! 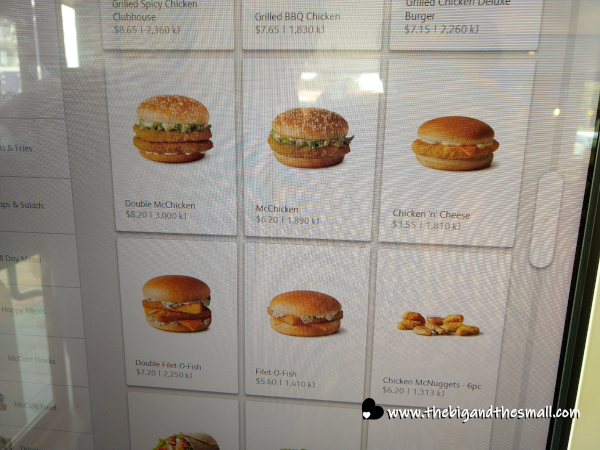 What really blew our minds, however, was the option of a double Big Mac. That's right, they took the biggest sandwich they make and doubled it. Also, the chicken nuggets came in a pack of 24! 20 is the most we've ever seen at one time in the States. I was actually craving nuggets and while 24 seemed like a ridiculous number, it was only $2 more expensive than ordering 6 so...we basically had to. At the end of the checkout process, we were given the option of rounding our order total up to an even number with the extra going as a donation to the Ronald McDonald house which I thought was really cool. I hope all McDonald's start offering this option! 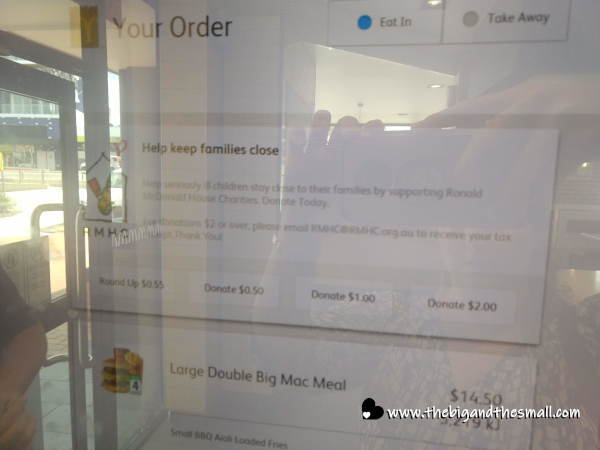 Our food came quickly and soon we were ready to dig in to our 24 piece McNuggets, double Big Mac, fries with special toppings, and a Diet Coke. 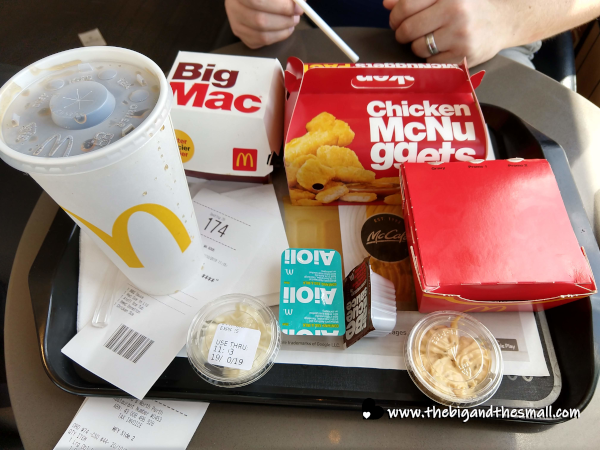 Well, as soon as we could figure out exactly how to eat a double Big Mac. It definitely took some finagling to fit a sandwich of that size into a normal human mouth. I'm usually not a fan of the Big Mac because I think it has too much bread, but the extra meat seemed to balance that out for me so I actually liked this one. Go figure. 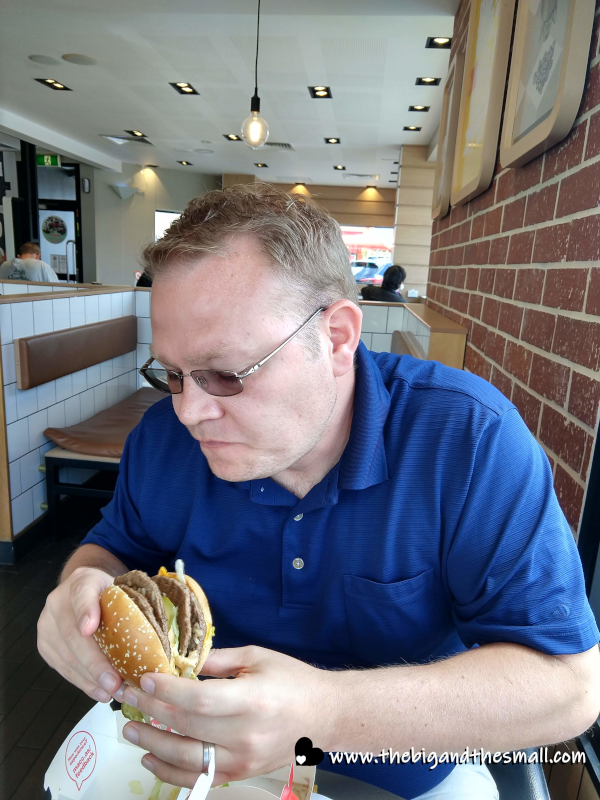 Other than the size of the sandwiches, the fries were the one unique thing on the menu that we haven't seen anywhere else. We could order them topped with Aioli and BBQ sauce! For some reason I haven't discerned yet, BBQ sauce is a thing here in Australia. They put it on everything - breakfast sandwiches, roast chicken, and it was even an option to replace the tomato sauce on the pizza we got last week. As toppings for fries go, it wasn't bad, but it also isn't something I would order again. I'll stick to lots of salt and ketchup for my fries, please. 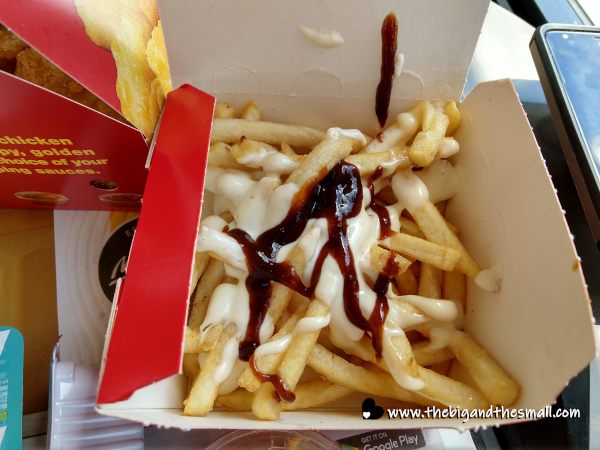 The nuggets themselves were classic McDonald's chicken nuggets and by that I mean delicious. I don't eat these often but when I do I love them. I was excited by the fact that we got to try some different sauces that I've never seen available before. We picked the four most unique ones on the menu - Aioli, McChicken sauce, Big Mac sauce, and BBQ (because see above about BBQ being a thing.) The Aioli was decent, very creamy, although best when mixed with the BBQ sauce like on the fries. What they called McChicken sauce I'm like 99% sure was just mayonnaise and while I like mayonnaise, it definitely doesn't deserve to be a dip for nuggets. By far my favorite of these choices was the Big Mac sauce, like, to the point that I might request that at other McDonald's' in the future. 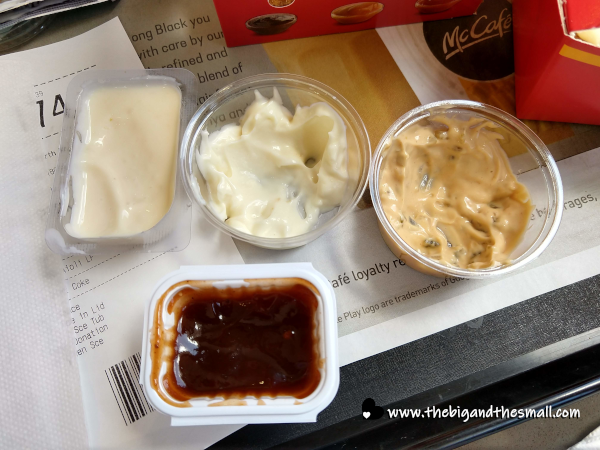 I honestly didn't think we'd be able to eat all of that food even between the two of us, but somehow we managed! It was definitely a filling meal. I am still shocked at how much bigger the portions were here as the US usually wins when it comes to gigantic restaurant food - but when it comes to McDonald's Australia takes the crown! It just goes to show one more way that Australia is both like the US and yet uniquely it's own place!