The Six Seasons of Australia

I love all four seasons - Winter, Spring, Summer, and Fall. As much as I love traveling the world and experiencing new places, anywhere I settle down for good must have all four - I could never live in the perpetual summer of the American South or even California. Of all the seasons, fall is my absolute favorite, so it's been very odd for me to spend October here in Australia where we are sliding from spring into summer rather than reveling in the changing leaves and cooler, crisper air. 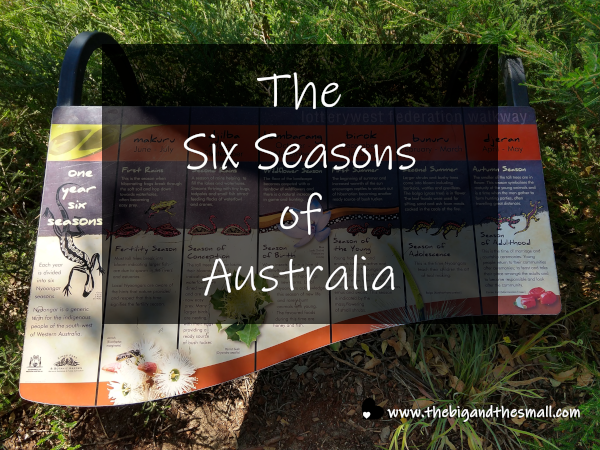 When we went to King's Park last week, I was fascinated to learn that the original inhabitants of Western Australia divided the year into six seasons. I thought it would be fun to explore with you the six seasons of Australia! (All of this information is from a helpful sign in King's Park.)

Makura June-July
First Rains This is the season when hibernating frogs break through the soft soil and hop down towards waterholes, often becoming easy prey.
Fertility Season Most tall trees break into bloom indicating larger fish are due to spawn in the rivers and estuaries. Local Nyoongars are aware of the hints that nature provides and respect that this time signifies the fertility season.

Djilba August-September
Second Rains A season of rains helping to fill the lakes and waterholes. Streams thriving with tiny bugs, tadpoles, and small fish attract feeding flocks of waterfowl and cranes.
Season of Conception The tall trees are now losing their blooms, a signal indicating that the waterfowl have dined well and are now easy prey. Many larger birds are nesting, with their eggs providing a ready source of bush tucker. (Edited to add - According to Google "bush tucker" is food, typically uncooked, from plants and animals native to the Australian Outback.)

Kambarang October-November
Wildflower Season The floor of the landscape becomes carpeted with a rainbow of wildflowers and there is a natural increase in game and hunting.
Season of Birth When insects are in a hive of activity other animals are feeding their hatchlings or newborns. Local Nyoongars acknowledge this season of new life and rarely hunt animals with young. The favored foods during this time are honey and fish.

Birok December-January
First Summer The beginning of summer and increased warmth of the sun encourages reptiles to venture out of hibernation becoming another ready source of bush tucker.
Season of the Young Young hatchlings and animals become active and playful. Local Nyoongars use this season to take children out to teach them hunting skills on young game including kangaroos, emus, and swans. This season is indicated by the mass flowering of small shrubs.

Bunuru February-March
Second Summer Larger shrubs and bushy trees come into bloom including banksias, wattles, and grevilleas. The balga (grass tree) is in flower. The leaf fronds were used for sifting sand and ash from meals cooked in the coals of the fire.
Season of Adolescence This is the time Nyoongars teach their children the art of tool making.

Djeran April-May
Autumn Season The smaller of the tall trees are in flower. This season symbolizes the maturity of the young animals and is a time when the men gather to form hunting parties, often traveling great distances.
Season of Adulthood This is the time of marriage and courtship ceremonies. Young people return to their communities after ceremonies; to feast and take their place amongst the adults and to become responsible and look after the community.

So there you have it! We are in the season of Kambarang and we should be eating a lot of honey and fish! I'm on board with the honey but I'll pass on the fish. And apparently we should be on the lookout for wildflowers! It's not quite the same as my golden fall leaves, but I can appreciate a different kind of beauty.

Which of these six seasons do you think would be your favorite?