So far during our time in Australia, we have not done much eating out. We've tried a few fast-food restaurants that sent good coupons in the mail, but every time we've looked at any other kind of restaurant we've had sticker shock. The food here is expensive. (The grocery store tends to be more expensive than we like as well, but definitely better than restaurants.) On Tuesday of this week, however, I did not feel like cooking. In fact, due to some unexpected conflict with our host at the time, I didn't even feel like being in the kitchen at all. I was going to settle for a piece of toast and a cup of tea for dinner (high anxiety tends to make me lose my appetite) but Joel insisted we go out to dinner instead. 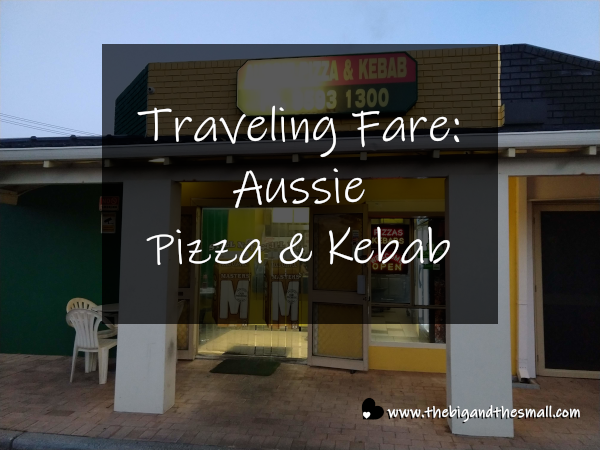 We had been craving pizza for a few days (after seeing a character in a movie eat a delicious looking slice) so we went to Google to try and find the nearest local pizza place. We had tried Domino's in Bulgaria and they have it here in Australia, too, but we decided to take a risk on something new. The nearest non-chain pizza place was called Aussie Pizza & Kebab which sounded pretty darn authentic, so we punched the location into Google maps and off we went! Even with help from our smartphones, we had a little difficulty finding the place. We accidentally pulled into the wrong parking lot and from that vantage point, the restaurant looked closed. But a quick walk around the corner showed us this hole in the wall place was very much open for business. 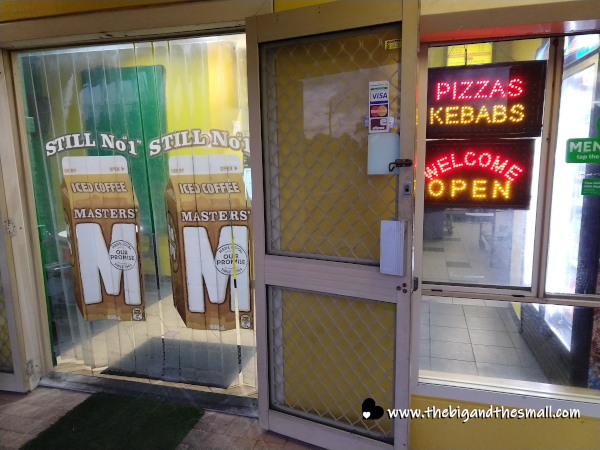 There was exactly one table in the whole place, so it wasn't exactly an eat-in restaurant. But it was bright, clean, and the staff were very friendly. When I spotted this sign on the counter I knew we were in for a real treat! 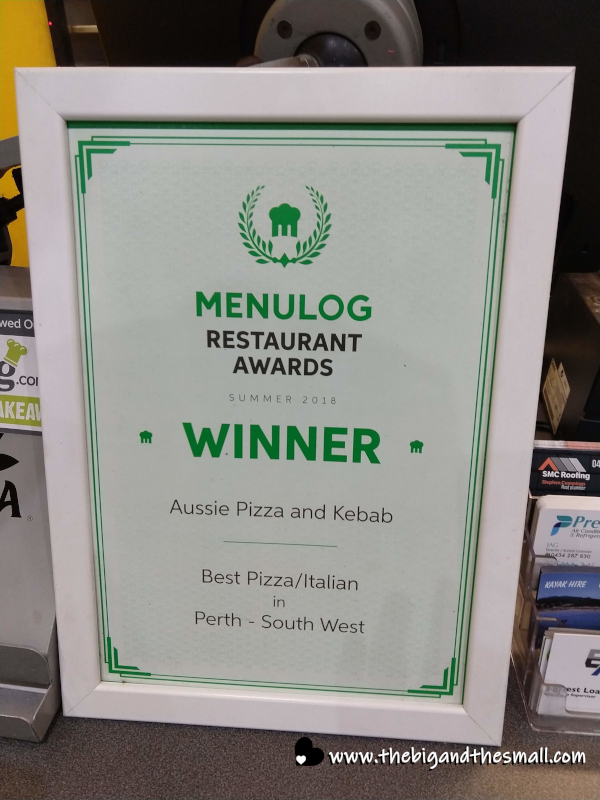 A quick read through the menu gave us one stand out option that sounded pretty unique. Called "The Dan" (which is Joel's brother's name, seemed like a good sign,) this pizza comes topped with pepperoni, beef, onion, capsicum, mushroom, olives, bacon, feta cheese & a swirl of garlic on top. Not sure what capsicum is? Joel didn't know either! It's the word Australians use for Bell Pepper - I only knew this because I had noticed the signs at the grocery store. After we ordered Joel got into a chat about politics with the store owner while I perused some recipe magazines that were chilling on the one table. 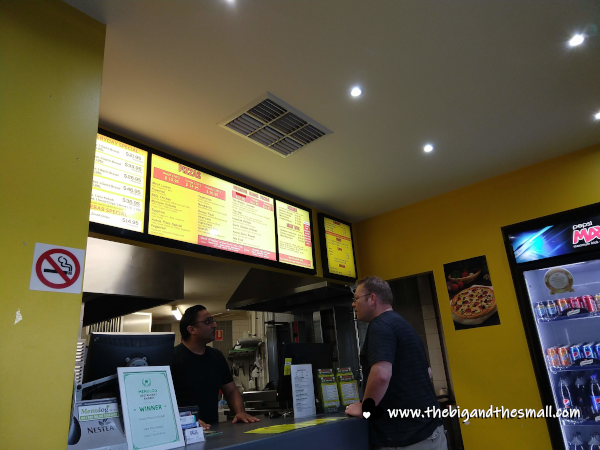 We were upsold into getting a meal deal that included the largest pizza they had (my appetite came back as soon as I smelled this place), an order of cheesy garlic bread, and a liter-sized drink. The cheesy garlic bread wasn't anything super special but it was delicious and absolutely hit the spot. I know I shouldn't use food as emotional comfort but darn it, it works! And for me, forget about the sweets, it's all about the carbs and cheese. 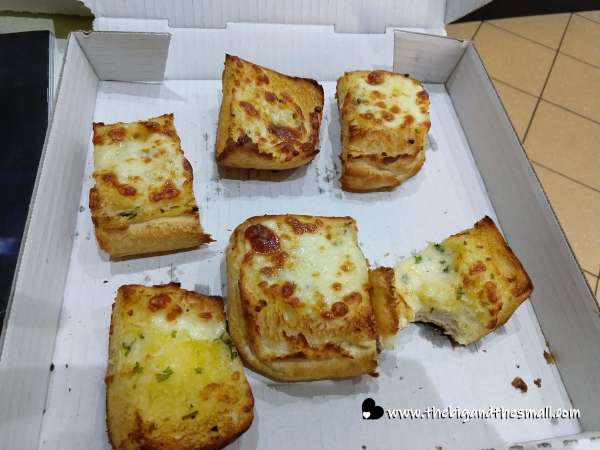 Our order was ready pretty quickly and even in that short time they place did a lot of takeaway business as people came in to grab their orders to go. It seems to be a popular place and after I got one taste of the pizza we ordered I knew why! Joel was pretty psyched to break into the pizza but I made him pause for a picture first. 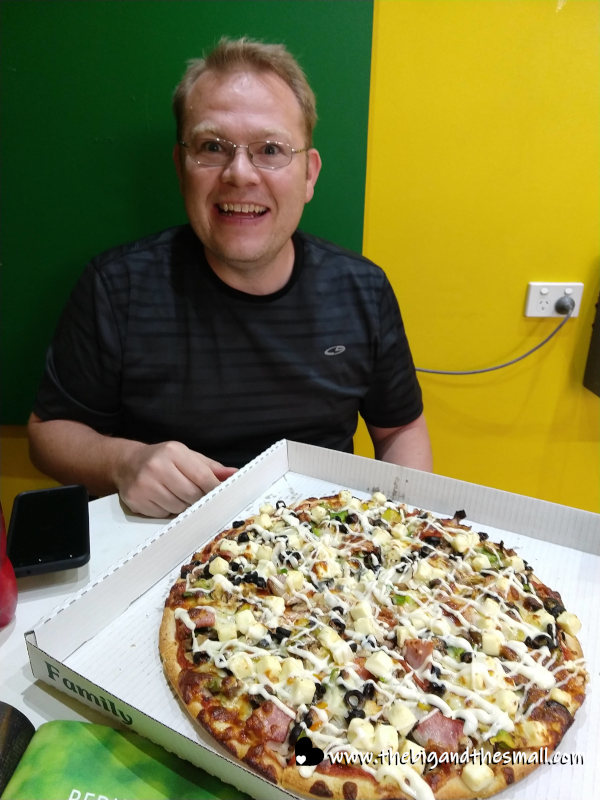 This pizza was so. freaking. good. To be fair, I'm kind of a sucker for pizza. If I could only eat one food for the rest of my life it would probably be pizza (though I still claim mac and cheese as my all-time favorite food.) But really, this pizza is in my top 5 of best pizzas I've ever in my life, and it might even take the top spot. What made it so awesome? The two final toppings - feta cheese and the garlic swirl. The feta was like none other I have seen in my life - it was cut into perfect cubes (I've only ever seen it crumbled before) and that shape meant that the cheese was a little crispy on the outside and perfectly creamy and delicious on the inside. Bites of the pizza that didn't include the feta were good but the bites that did include it were out of this world! The creamy garlic sauce that was generously swirled on top was the perfect final touch. 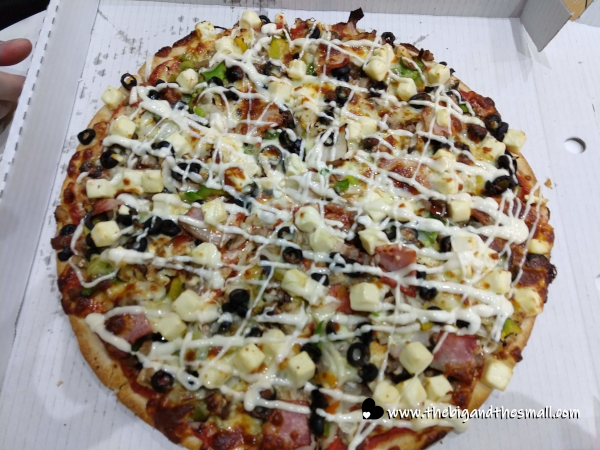 We were both impressed with how generous they were with all of the toppings, and we loved that they went almost all the way to the edge of the crust. The crust itself was perfect - thick enough to support all the toppings but thin enough to not overpower and it was cooked to an even crispness with no accidentally burned or charred spots. I think Boyle would say that this pizza had a great "mouth feel." (Anyone else a Brooklyn 99 fan?)

We were about two bites in when we began plotting how many more times we would eat this pizza while we lived here (it was also pretty decently priced.) We had settled on at least once a week but then our plans got a little upended when this happened and we are now a 30-minute drive away instead of a 5-minute drive, so I'm not sure we'll make it back at all which makes me sad. But we have internet now which makes me happy so I guess it all evens out in the end. And I'll always have the memories. Thanks, Aussie Pizza & Kebab!