Since we have officially determined that our next housesit is going to keep us in the general Perth area, we have decided to spend our last couple of weeks at this housesit exploring the towns and areas south of us. Our next housesit will move us about 15 minutes closer to the city, so we'll go north and explore the city once we are there! So this weekend we set out to explore Mandurah, Australia, a cute little coastal town about 15 minutes south of our current location (so about an hour south from the city of Perth.) 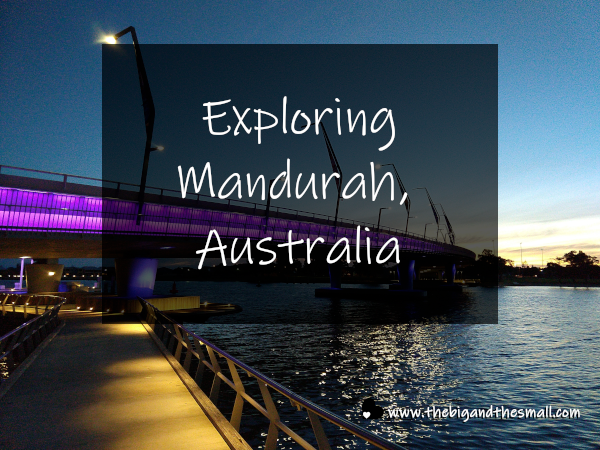 Our first stop was at a fast-food restaurant - Hungry Jack's to grab some breakfast. We got some coupons in the mail so we figured, why not? The restaurant was right next to a mall so after eating we stepped next door to check out the shops available at the Mandurah Forum. This mall was gigantic, and look what US favorite I found inside! That's right, a Target in Australia! We had to check it out, of course, and found that it was a bit different than what we are used to from Target back home. It was designed and felt more like a department store than a typical Target, and the prices seemed to reflect that as well. Or perhaps we are still just getting used to the higher price of everything in Australia! 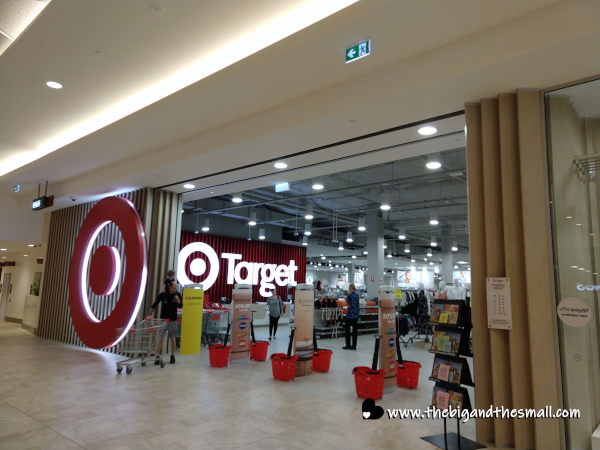 Next, our plan was to go to the local Visitor's Center to get information on any "must-see" places in the area, then spend time walking around and exploring. It turns out most things in Mandurah are within walking distance - 20 minutes or less - of that center so we spent the rest of the day exploring the area! Almost everything was located along the water so it was a lovely walk, and we were impressed with the ways the city of Mandurah makes the area inviting - like with this picture-perfect photo opportunity! 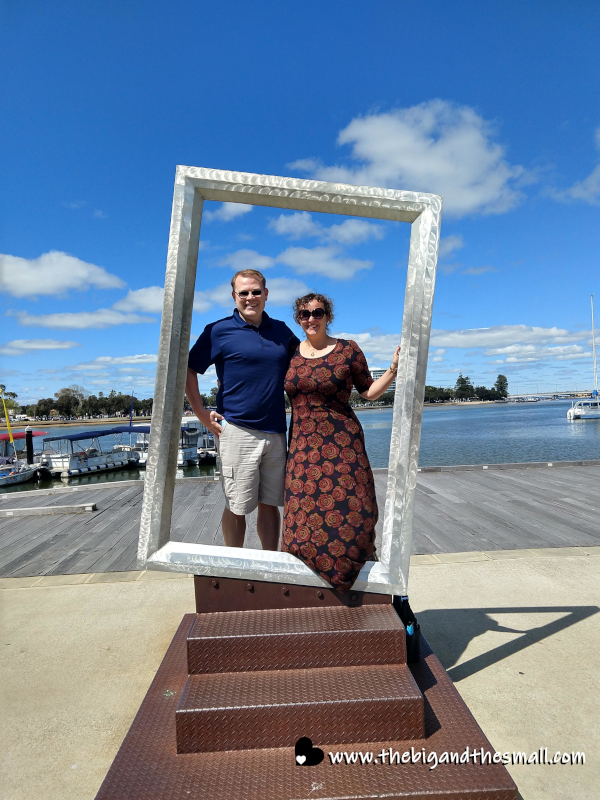 At one point on the boardwalk was this cute "love locks" display. Love locks are a tradition around the world - the idea is that you take a padlock, put the initials of you and your love on it in some way (carve, paint, etc.), then lock that padlock onto a structure as a way to show that your love is forever. The tradition started in Paris (I believe) but eventually the bridge where the locks were placed became so popular that the weight of the locks actually threatened the integrity of the bridge! The city of Paris has since removed the locks, but the tradition has spread to other parts of the world. This one was started in Mandurah on Valentine's Day in 2015. 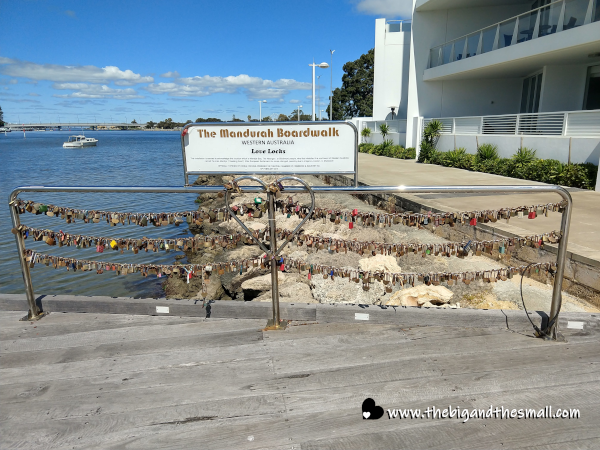 After the locks, we came to "Stingray Point" (no stingrays to be found, unfortunately) and admired this tree which is on the "Significant Tree Register" of Australia. It is a Moreton Bay Fig which we confirmed when we walked underneath and found a whole crop of figs lying on the ground. The tree was beautiful and it was highlighted by the gorgeous day we were having! 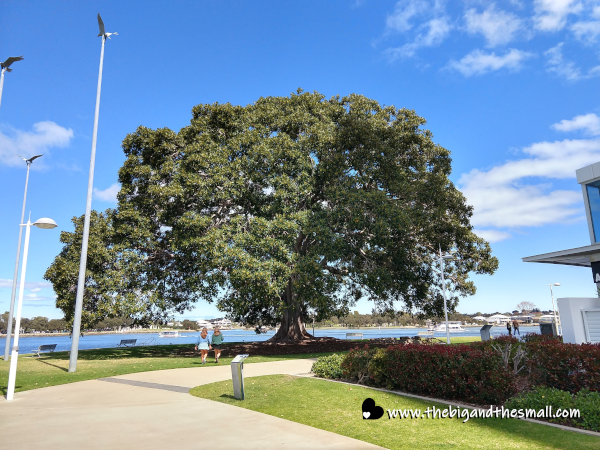 Our walk continued into a residential area featuring canals that were inspired by Venice! They are even called the Venetian Canals! While quite a bit more modern and updated than the canals we saw in Venice just a few short months ago, I can definitely see the inspiration. Truth be told, as beautiful as Venice is, if I was going to live on some canals I think I'd pick these. Less chance of flooding! 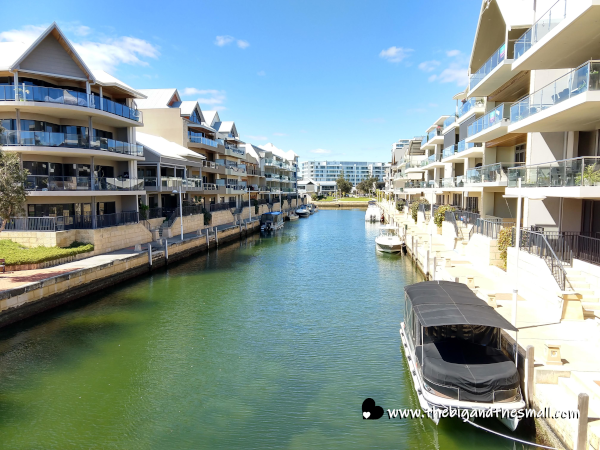 From there we found a pedestrian bridge that took us over the enticingly named "Dolphin Pool" (where there were no dolphins to be found, unfortunately.) The whole area is very foot traffic friendly and features plenty of shops and restaurants as well as a great swimming beach and pirate themed kid's play area. 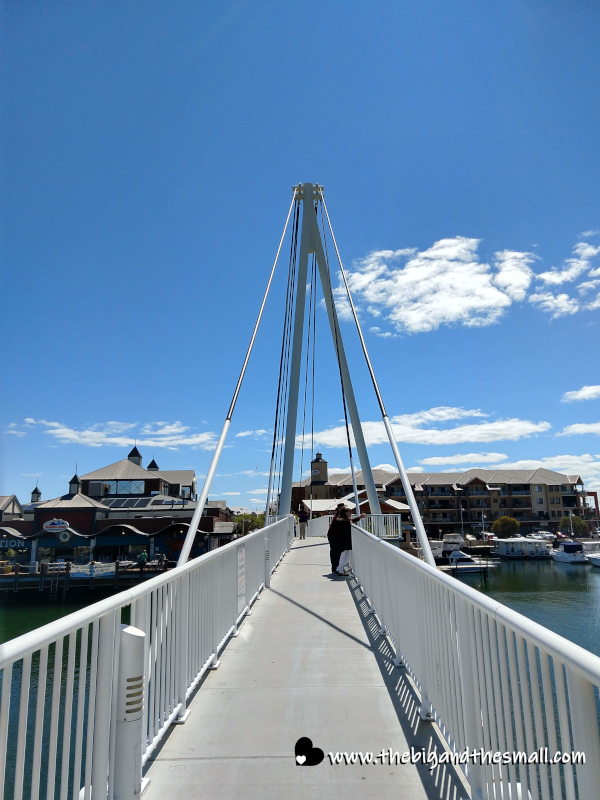 After browsing the shops (but not buying anything!) we traced our steps back to where we started at the visitors center. I was, apparently, itching to shop so we drove just a few kilometers away to the one thrift shop that was open in the area (a new to me thrift shop - I couldn't resist!) I still haven't found the perfect dress I'm looking for but I did find a skirt I'm planning to debut on my birthday tomorrow. We also grabbed a cheap lunch/dinner at a place called Chicken Treat (again, coupons) then headed back to the visitors center. We had some time to kill before going to a movie and we ended up stumbling upon a very cool modern art display. I will blog individually about both the art and the movie later this week!

After the movie we continue walking around Mandurah, this time going the opposite direction of where we started the day. There was another cool photo opportunity in the form of this heart sculpture - made even more beautiful by the water and the sunset in the background. 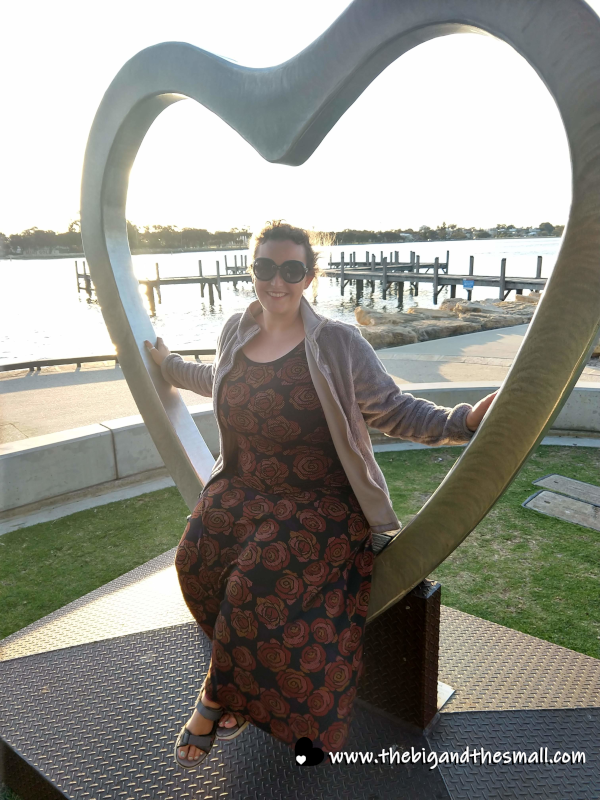 We continued along our walk with our goal being the Mandurah War Memorial. It was about a twenty-minute walk that took us along the water and over the Mandurah Bridge. We were impressed with the wide pedestrian walkway on the bridge and particularly enjoyed that it was set below the driving part of the bridge. This meant that as we walked we could hear cars that passed above us but they didn't affect our view of the water. 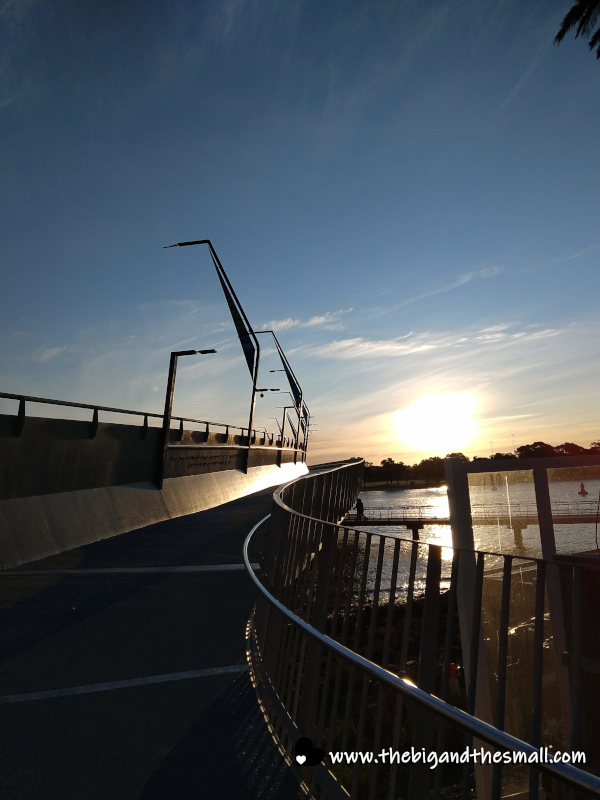 As we approached the war memorial we found something unique to Australia - a flock of parrots! That's right, like you might find a flock of pigeons or crows somewhere else, here we came across a flock of bright pink parrots. I tried to get as close as I could for a picture but ended up startling them and they took off! 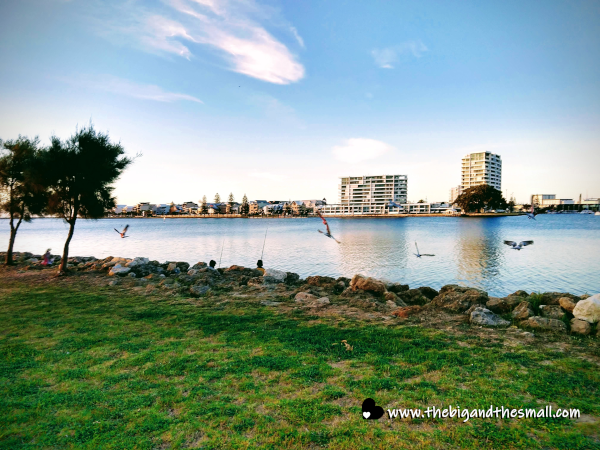 The war memorial itself was very interesting and worthy of its own blog post so I will also write about that later this week. On the way back we crossed the bridge again and were delighted to see how it is lit up at night! The lights are a different color every day of the week, and business or non-profits can book the lights to be a certain color to bring awareness to a cause or an event. What a neat feature! 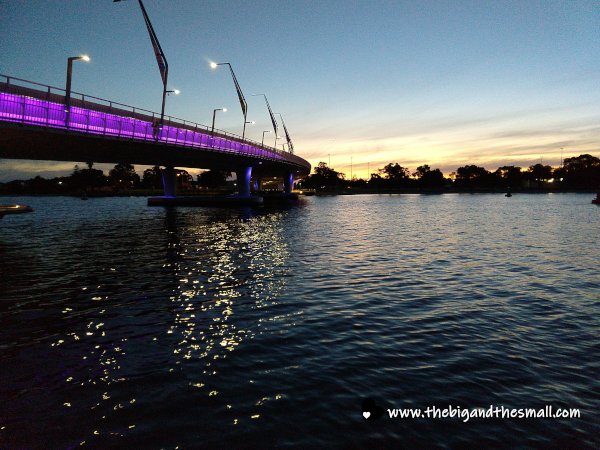 Our final walk back to the car was made beautiful by the sunset and then lit up by colorful string lights on local businesses after darkness fell. We declared this day the first day of my birthday celebrations (my birthday is on Tuesday) and I think it was officially a success! 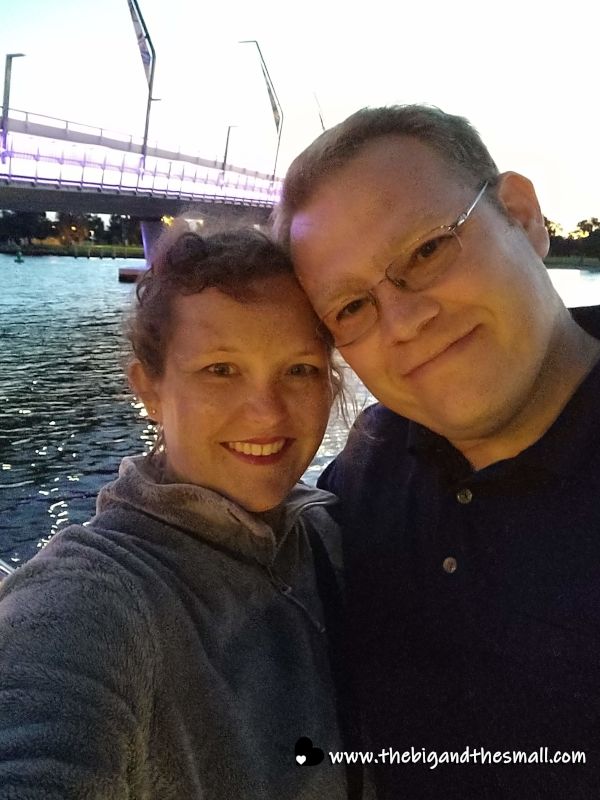 This week I'll be chatting more about the art we discovered, the very Australian movie we saw, and the war memorial, so stay tuned!