Opportunity Knocks at the Op Shop

Ever since we lived in England at the beginning of this year I have fallen in love with thrift shopping. It's sort of returning to an old love for me as I used to be an avid Goodwill shopper in high school (much to the chagrin of my mother who did not think my vintage t-shirt finds were nearly as cool as I thought they were.) In the UK we learned that thrift shops are called "charity shops" because each one is run by a different charity and the money raised in each shop goes to support that particular charity. In Australia we have learned that thrift shops are called "op shops" - when we asked why at the first one we went to, they said the "op" was short for "opportunity" because, and I quote, "You never know what you will find!" 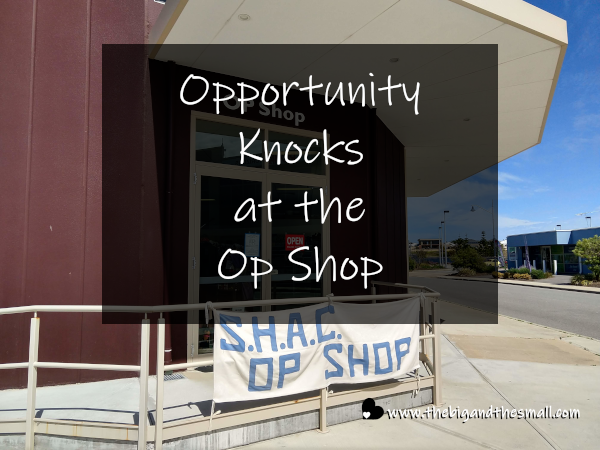 Almost as soon as we arrived I was asking our host, Emma, for the scoop on any nearby op shops. I had been itching to thrift and I had two goals for items I want to thrift in Australia - a mug and a dress. I want a mug because I miss having my own mug at each housesit. I had one last year as we traveled but I left it at my parents this summer thinking I didn't want to take up the room in my suitcase for it, but it turns out that was a bad idea. As for a dress, well, I love dresses and it's the perfect "souvenir" from a place as I'll always remember our trip to Australia when I wear it! To start our search we went to the nearest op shop which happens to be adjoined to and run by the local Anglican church I've been attending on Sundays. 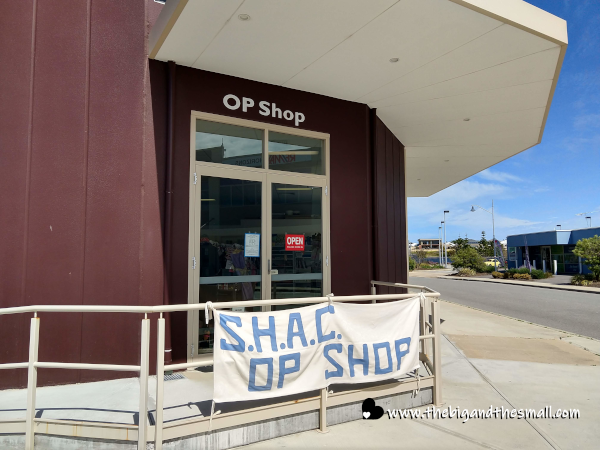 I love the idea of a thrift shop run by the church - it is staffed by volunteers from the church and all proceeds go to support local ministries! We've been to this one a couple of times (it's within easy walking distance) but so far I haven't had any luck finding anything yet. 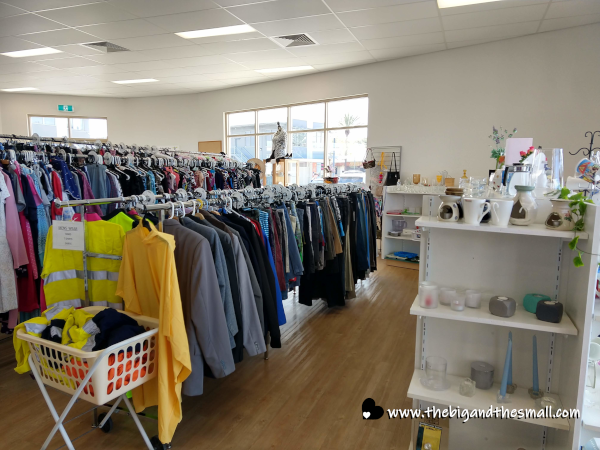 Emma told me the best ones were just a short drive away so we hopped over to Port Kennedy (about a 7-minute drive) and found 3 huge op shops within blocks of each other! The name of this one cracks me up - Good Sammy. I think Sammy is short for Samaritan? As in Good Samaritan? I'm not 100% sure though. I thought I was about to find something good here the other day - I tried on 3 dresses and 5 tops - but nothing was quite right. Even at thrift store prices, I am very picky about what I buy right now (because minimalism and saving money.) There was a tee that was white with black stripes that I loved except the white part was see-through! Why do they even make shirts like this? It drives me crazy. 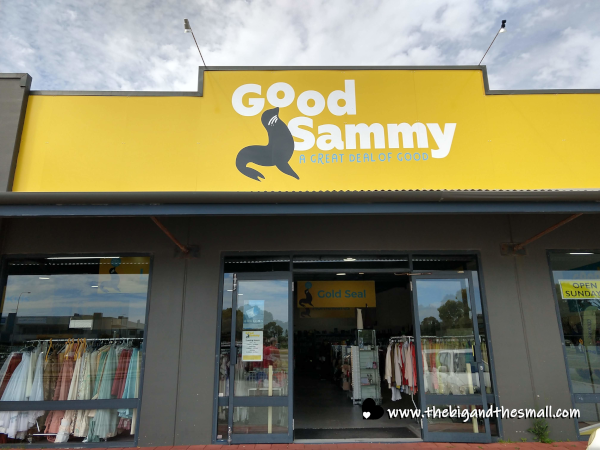 The next stop was Salvos which is linked to the Salvation Army. We have had some good luck here, actually finding two mugs that we have purchased! I'm going to share those in a different post soon as, like the dork I am, I'm going to create a blog post dedicated to my mug collection. (I plan to have a varied, quirky, hopefully hilarious mug collection so I want it all documented in one place.) So, that's coming for you to look forward to. 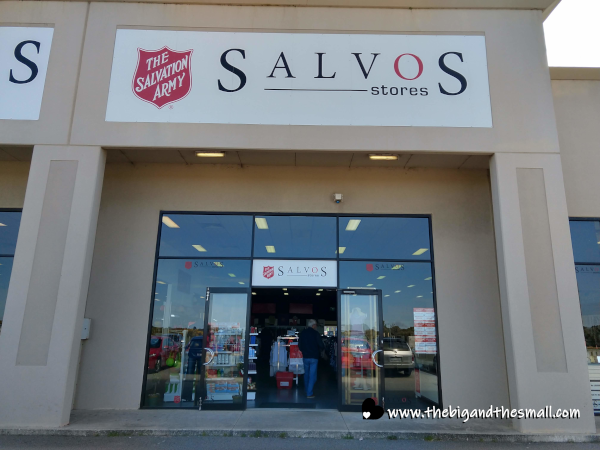 I also tried on several dresses here including a red one that was so close to being perfect except it had one random zipper right above the left boob. It didn't even actually open a pocket or anything it was just a zipper. Does not compute. What I thought was particularly neat here is they have a specially curated section called the Salvos Street Boutique. It appeared to be higher-end items and everything was displayed like a boutique shop rather than standard thrift store racks. It's pretty cute! 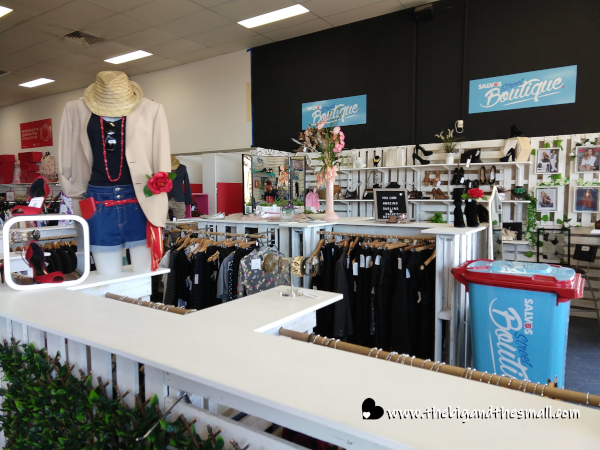 Also while we were here Joel spotted what he called the "mascot" but what I really think was just a random employee trying on a costume they had for sale. By the time we found him for a picture the employee had removed the mask but we asked him to put it back on for a picture and he was a good sport about it. 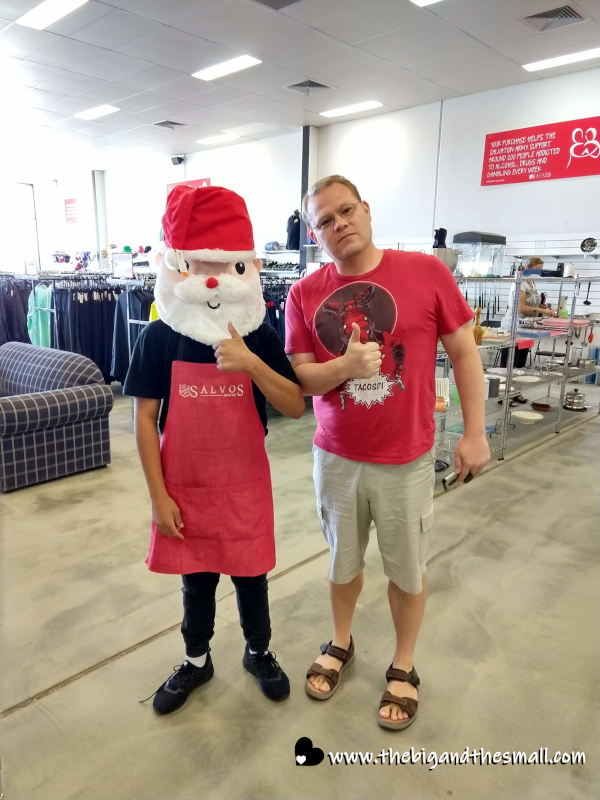 We've been to all of these stores multiple times by now and we have had by far the best luck at this last one - Vinnie's. On our first trip, we found three pairs of shorts for Joel that cost us a total of $12 US dollars. Joel actually needed new shorts far more than I need a new dress so this was a real score for us. On our second trip, we found a hat for me, and our next housesit! 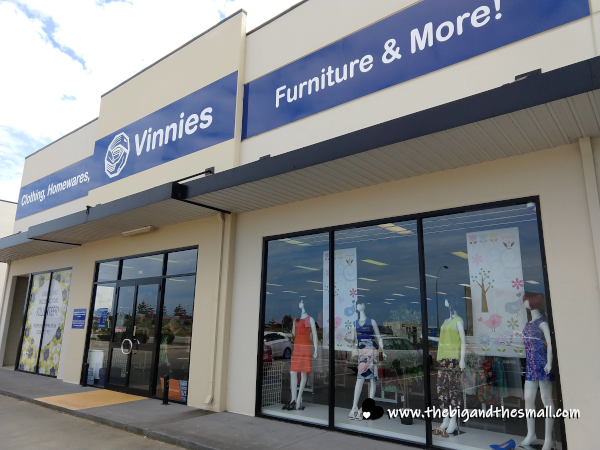 First, the hat. As soon as I spotted the hat I tried it on and fell in love with it. I wore it around the store for like 20 minutes but ultimately ended up leaving the store without it. I already have a hat with me so I don't need another one, although this one is totally different in color and style. Two days later I was still thinking about the hat so we went back and purchased it. I couldn't resist! 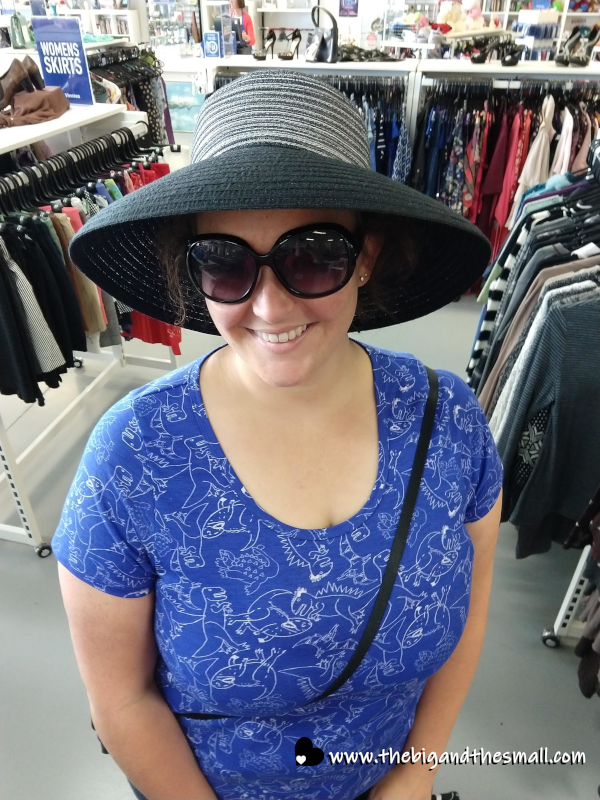 I almost bought a dress here, too - this gorgeous red with white polka dot number. I loved it but Joel did not. So, to try and get another opinion on my side, I asked a lady standing nearby what she thought of the dress, thinking surely she would back me up. She said, in a lovely Polish accent, "You are beautiful. But you cannot buy this dress." Cue the sad trombone. 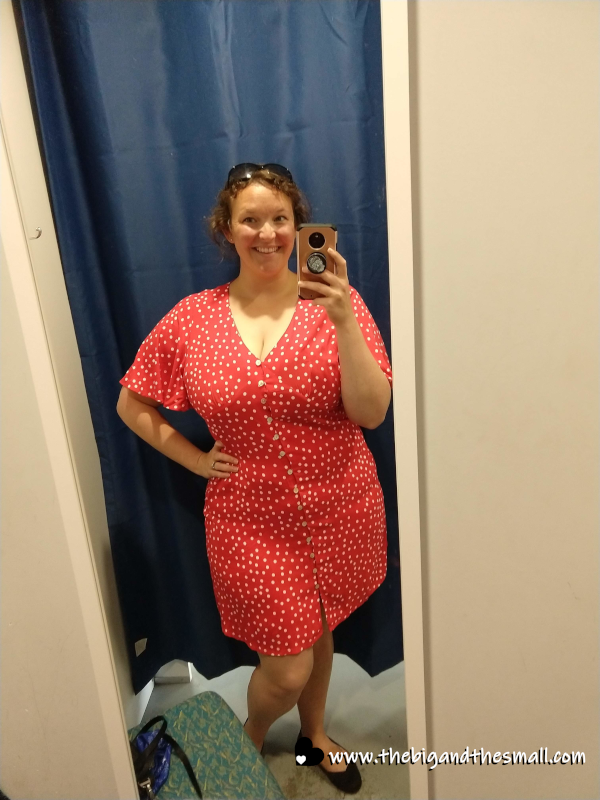 I moved on from the dress and we continued exploring the store. We ended up chatting to the lady behind the counter (about why I was not going to buy the hat I had been wearing for 20 minutes) and we shared that we were housesitting in the area. The lady who told me I couldn't buy the polka dot dress overheard us and joined the conversation and it turns out she needs housesitters towards the end of this year!

She leaves to go back to Poland on November 12 and plans to stay through the end of the year. She has two dogs that need to be cared for and usually, she has to pay a coworker to do so. At first, we didn't think this would work out because our current housesit ends on October 3rd and we wouldn't have anything to do in the area until November - we thought we would end up having to take a housesit on the other side of Australia (Sydney or Melbourne) and then it would be too expensive to come back to Perth for another one. When she heard this Stef (we had learned her name by now) said no, just stay with me when you are done where you are!

We clarified with her that we would need a place to stay starting October 3rd and she wouldn't leave until November 12th - are you sure that's okay? Yes, yes, of course! It will be great! (She has the most lovely accent.) We set up a time to visit her this week to see the house and meet the dogs, which we did this afternoon. At the end of that visit, our plans were firmed up - we will be moving to Stef's place on October 3rd, then housesitting for her through the end of the year!

Sometime during those few weeks while Stef is still home we will have to take a trip outside of Australia. Our visa is good for 1 year but we can only stay for 90 days in a row at a time. Since we entered in early September we wouldn't be able to stay through the end of the year without taking a trip out of the country. So we are currently looking at possibly going to Bali, Singapore, or dreaming of New Zealand if it's not too expensive. The lovely thing about staying with Stef is that our time will be flexible so we can book the cheapest flights and we can leave our big suitcases with her and travel light!

The other great thing? We are saving money by getting to stay in Perth and not having to travel to the other side of Australia (just yet.) So we plan to take some of that savings and spend it really exploring all that Perth has to offer! Often we try to stick with just the free things we can do wherever we go, but this will allow us to splurge a bit on some more costly tourist attractions (petting kangaroos here I come!)

So that's the story of how we found one hat, two mugs, three pairs of shorts and our next housesit at the Op Shop. You never know what you will find, indeed! I'm still looking for that perfect dress, though.