I must admit, I was very late to the Downton Abbey party. I never watched the show when it was airing, despite all of my friends and my mother raving about it. Thankfully, when the series ended my mom purchased the whole set on Blu-Ray, and I finally got around to watching it last year before we left on our adventure. I'm actually quite glad I didn't watch until it ended, some of those season end cliffhangers would have been quite brutal with a year-long wait until the next season! 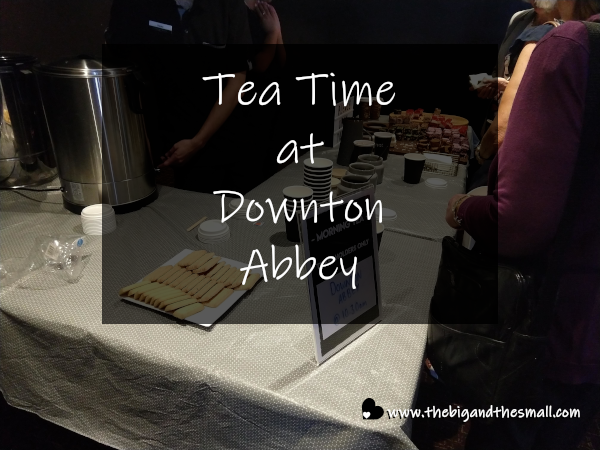 And bonus? I didn't have to wait too long for the next installment of Downton Abbey - the movie! I like to joke that while we are in Australia we are "living in the future" since we are 13 hours ahead of everyone back home. Well, when it comes to the Downton Abbey movie we really are living in the future - it opened here (and in the UK) a full week before it will open in the US! Last week we started researching movies in the area (hoping to find a "cheap day") and instead we found that not only was Downton going to be playing, but several theaters were offering "tea times" with some of the first showings. Um, getting to see Downton Abbey and have a tea time? Yes, please!

There was one extra fancy one promising a "high tea" experience but it was a 50-minute drive away and over $20 a person. As much as I think I would have enjoyed that we decided it wasn't quite worth it. Instead, we went with a theater only 15 minutes away that was offering a simple tea time in the half an hour before the movie started. When we arrived, it was clear we weren't the only ones excited about the movie (or the tea!) as the line was almost out the door! 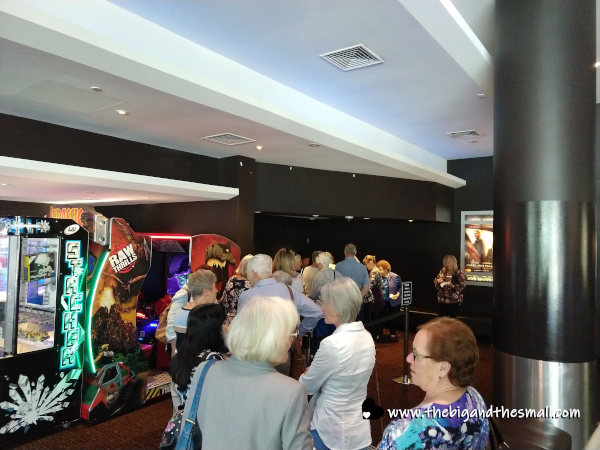 We hadn't purchased our tickets online because there was an extra fee, so when I saw the line I was a little nervous that it might be sold out. But thank goodness it was not! I stayed in line for the tea and cakes while Joel went to get us tickets. When he came back I made him take a selfie and said, "Show how excited you are to see the movie!" As you can see, he was less than thrilled. 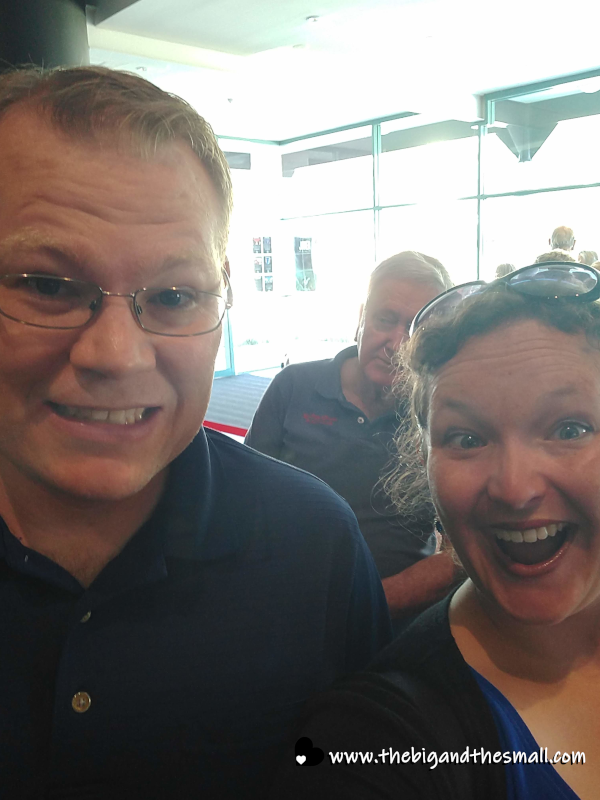 The tea and snacks cheered him right up though. There was a little snafu with the water for the tea not being hot at first (they forgot to plug in the giant kettle) but once that was all sorted we got our tea (with milk and sugar) and moved on to the cakes. They all looked delicious and I wish I could have tried them all but alas, we were limited to two each. I tried the two from the third tray while Joel tried the two from the second tray. We shared a bit of each with each other. Mine were red velvet cake with cream cheese frosting and a sort of tiramasu-like cheesecake, while Joel's were a mint chocolate brownie and a coconut something or other that tasted like one of those pink snoballs from Hostess. 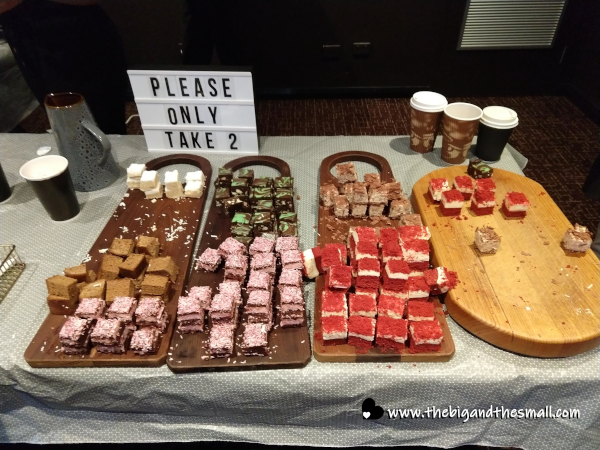 After we were properly prepared with our tea and dessert we went into the theater! I was worried about getting good seats because it was so packed, but the theater was huge! (I took this picture after the movie) We picked some great seats then settled in to wait for the movie. Joel and I were actually accompanied by a new friend of ours - Elaine. My mom's friend Emily is friends with Elaine and when Emily learned we were going to Perth she introduced us via Facebook. Early last week I messaged Elaine to meet up and she was excited to learn we were going to the Downton Abbey movie! She actually left later that night to go back to the States for a month-long visit, so we were glad to spend time with her before she left town. 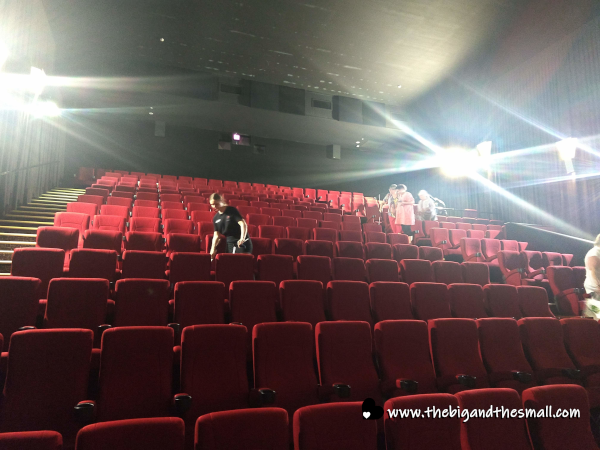 So how was the movie? Fantastic! You can read our whole (spoiler-free!) reviews here. I must say, after living in the UK for almost 6 months I find the whole show even more fascinating. Now I have been to some of the places they reference and it's fun to see the bits of 1920's culture that have stuck around in the UK - like tea time! (Brits really, really do love their tea.) After the movie we headed outside and walked around the theater for a bit. It turns out to be located right on the water! (We didn't notice beforehand, I was too focused on getting to the movie on time.) 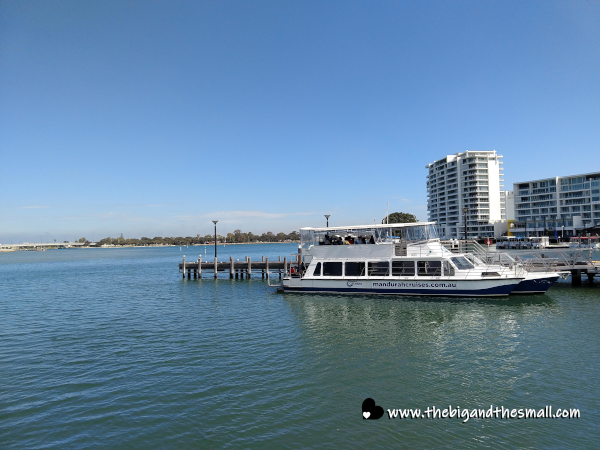 The day was absolutely gorgeous (low 70's and sunny) and it was the perfect weather to sit outside and chat with Elaine for a bit. We ended up wandering down the marina to an ice cream place that she said was really delicious so we decided to get some (despite just having had cake at the movie!) I was very much tickled by the sign on the ice cream counter - I love a good pun! 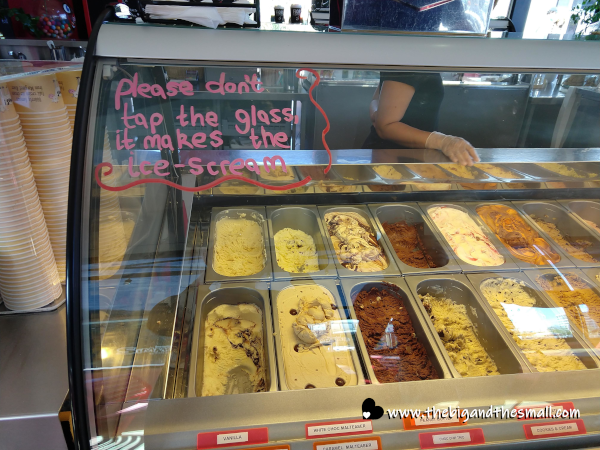 We had a tough time choosing the two flavors we wanted to try as there were a lot of intriguing choices plus some of our regular favorites like chocolate and peanut butter. In the end, we went with burnt caramel and white chocolate blueberry. While delicious, it was not quite as good as the gelato we had in Rome or even Bulgaria. Also, it was expensive with this cone clocking in at $8 Australian (which was about $6 in US money.) (Compare that to the $1.75 we paid for three scoops in a cone in Bulgaria and you can see we are having some sticker shock here in Australia!) 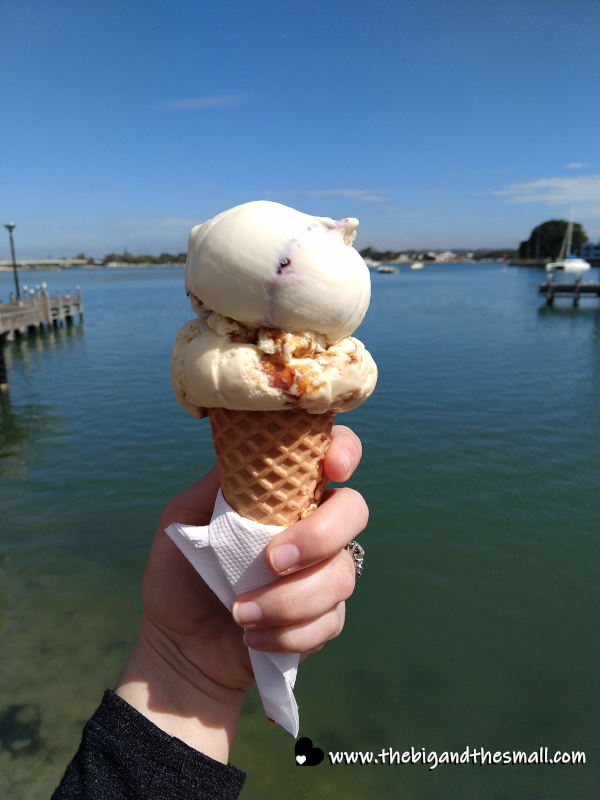 Of course I had to take a selfie with Elaine to prove we really met! After our ice cream, we accompanied Elaine to her house so Joel could provide some tech support. Before the movie started she mentioned that her soundbar was not working with her Blu-Ray player so she was unable to watch any movies at home. It took Joel about an hour but he finally got her whole system working together! Plus we got to see her beautiful house. 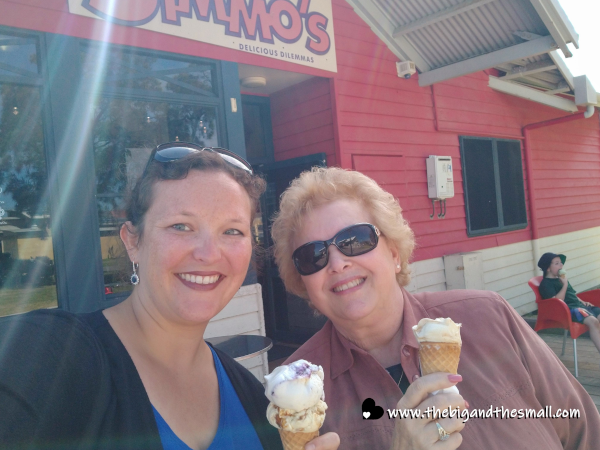 All in all Friday was a wonderful day here in Australia. I can't wait till all my friends back in the US get to see Downton Abbey so we can chat about it! Also, what is Downton Abbey in the movie is Highclere Castle in real life and the 8th Earl and Countess of Carnarvon still live there! They do open the home several times throughout the years for tours and special events and you better believe it is on my UK bucket list to go to one of these someday. I'll be taking my mom with me, hopefully!