Here at our first housesit in Australia, we are taking care of four different animals - two dogs, a cat, and for the first time since Germany, we are caring for something other than a cat or a dog! I know you've heard about all the crazy/dangerous/terrifying animals that can be found in Australia...but don't worry, we don't have anything exciting like that. 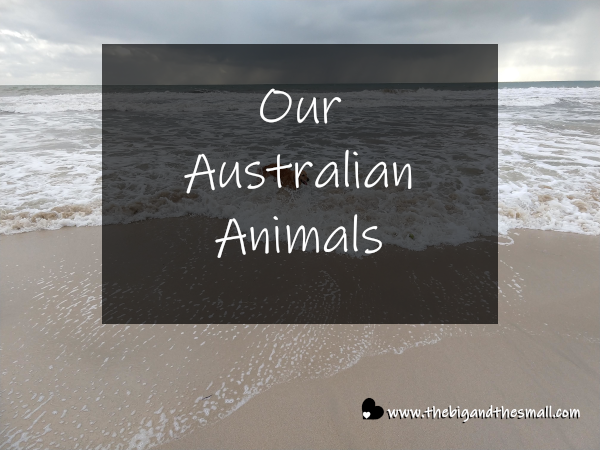 So what are we caring for? A lizard! His name is Wilson and he is pretty chill. He lives in a cage with lights that turn on and off with a timer. We don't even have to clean the cage while we are here so that makes it pretty darn easy! When I went to take his glamour shot today he wasn't in the best spot for a picture. Can you find him? 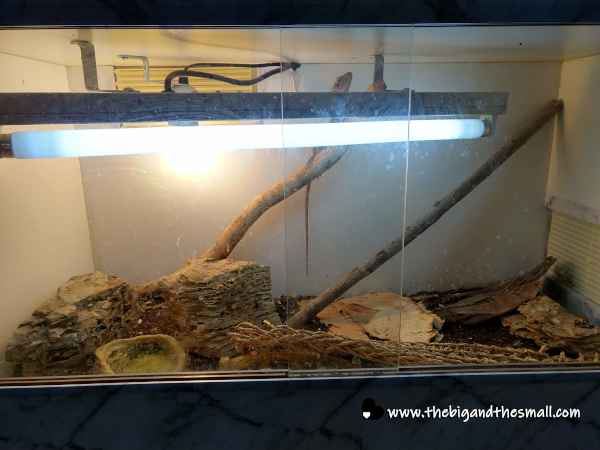 There is one thing that is a bit unusual about taking care of Wilson... He eats crickets - live crickets! Every other day we have to give him about 4-5 live crickets. I say we, but I mean Joel, I do not partake in any part of feeding Wilson. Joel has to pick the crickets out of ths box with the tweezers, then put them in the cage for Wilson to eat. Since the crickets are live they don't last forever, so we have to buy some new ones for him soon. 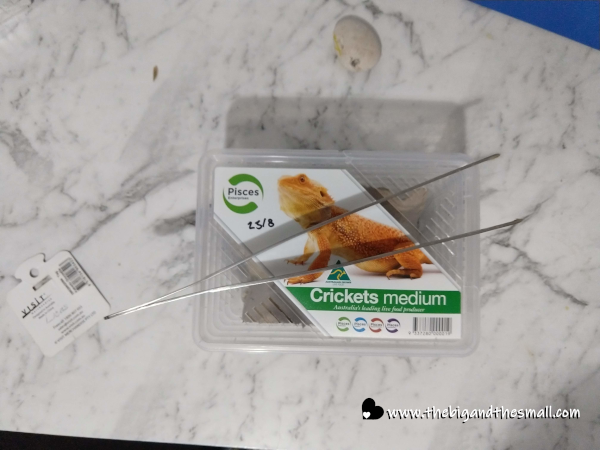 The cat here is named Monty, and he very sweet, cuddly and easy to care for. We make sure he has biscuits out all the time, then give him wet food in the morning and the evening. Other than that we just let him in and out of the house as he pleases. Since he spends plenty of time outdoors we don't even have a litterbox to change! Yay! Also, unlike our French outdoor cats, he has yet to bring us any "presents" (a fact for which I am ever grateful.) He loves to cuddle at night, and I swear he was not as annoyed in real life as he looks in this picture. 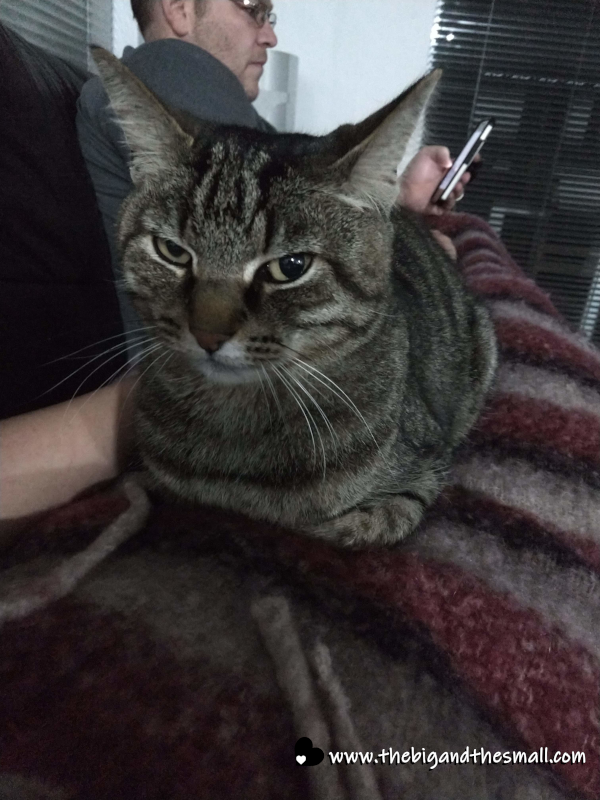 He does have one very odd habit. At night, when we are snuggled on the couch watching TV, he likes to hop up on the media cabinet and sit right in front of the television. At first, we thought he just did it when he was hungry as a way of saying "Hey humans! It's time to feed me!" But now the last couple of nights he has done it even after he's been fed! He doesn't stay long so we usually just tolerate it until he moves on. 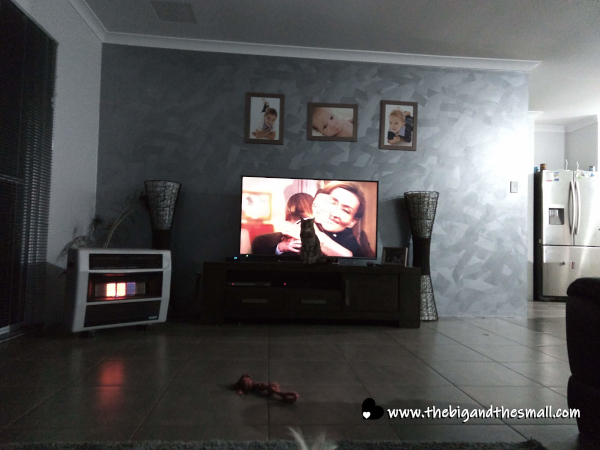 I am impressed at how well Monty gets along with the two dogs who live here. I've yet to see them fight or get mad at each other and often they hang out together! 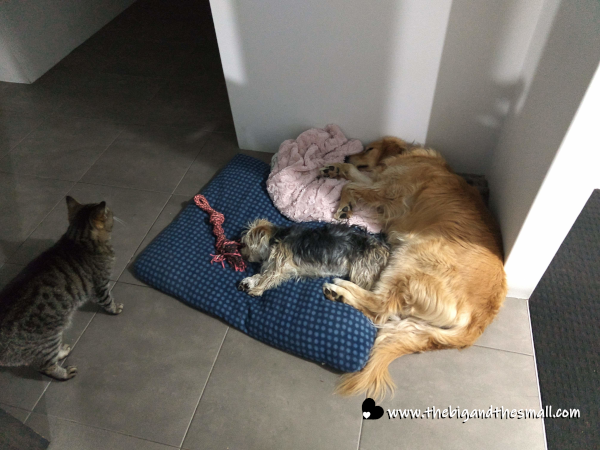 The two dogs are Gypsy - the four-year-old golden retriever, and Milly - the one-year-old terrier mix. They get along with the cat and each other very well, though the two dogs do like to play fight with each other sometimes. I am very impressed with Gypsy's restraint with Milly. She could easily take her down if she wanted to but she is always very gentle with her! It's fun to watch them mess around together - although I took this shot when I was trying to do yoga and they were getting into my personal space, lol. 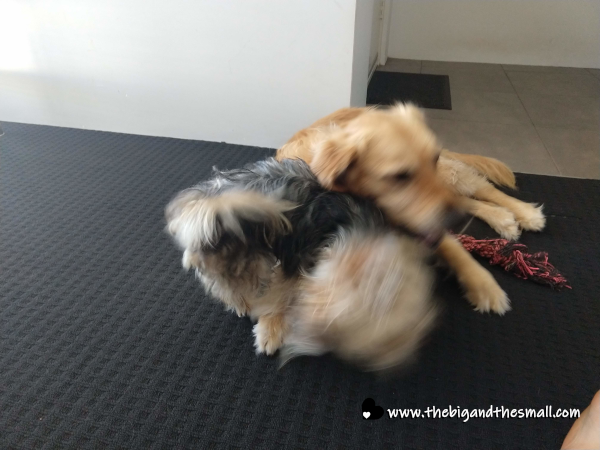 Gypsy seemed to like us right away and is a big fan of anyone willing to play fetch with her. Milly, on the other hand, took a few days to warm up to us. At first, she was really freaked out by Joel, and they said that was common for her, she used to be freaked out by Heath (her owner) too, to the point that she peed on the ground every time he came home. After a couple of days, she decided she liked us after all and now anytime I sit down on the couch she is not far behind asking for a cuddle! 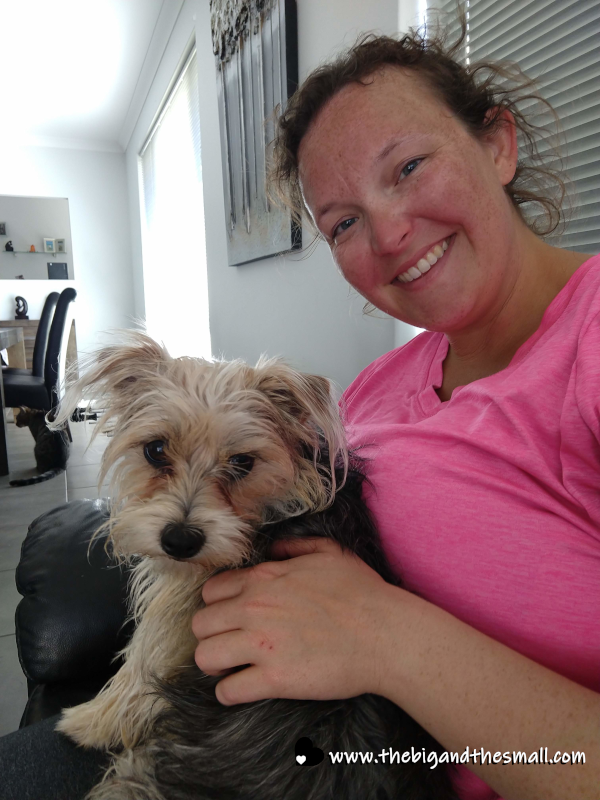 The really unique thing (at least to us) about these dogs is how much they love the beach and the ocean! I mean they love it. Their owners take them to the nearby dog beach, take them off-leash, and just let them run. They even play fetch with Gypsy and throw her tennis ball way out into the water and she goes after it! Can you see her all the way out there? 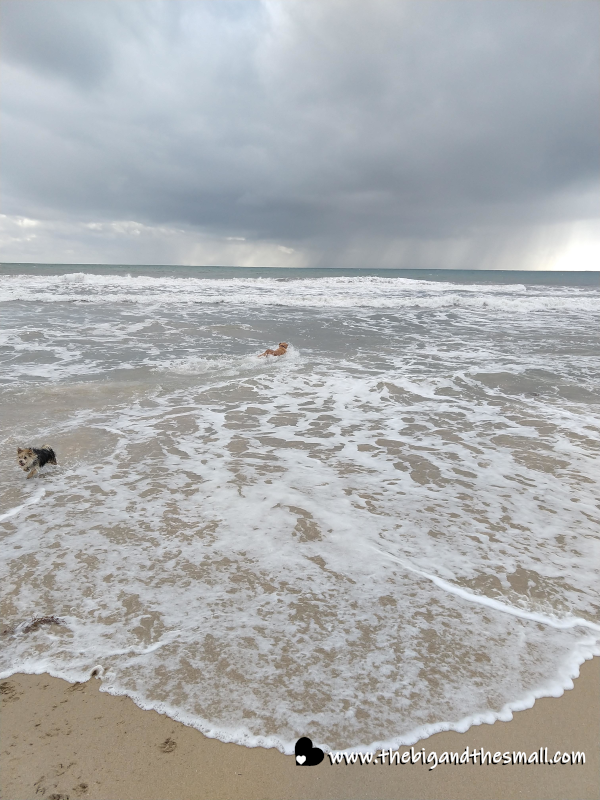 It makes us nervous to do this with the dogs - what if they don't come back when we call? what if they get attacked by a shark? what if? what if? But we have decided to take them to the beach at least once a week while we are here because we saw how much they love it and would feel bad depriving them of that joy. I mean look how cute. 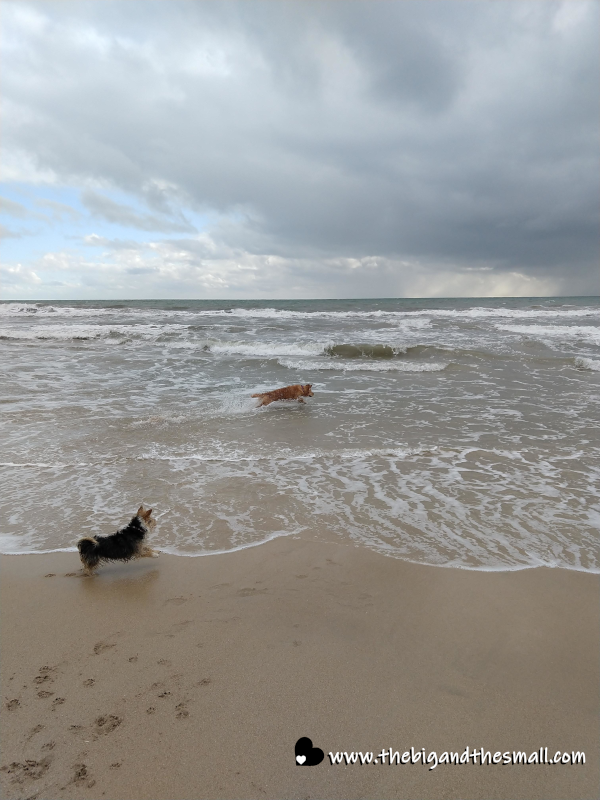 Gypsy in particular really gets soaked and looks quite different when she's all wet. Here ears end up looking they are that crimped style from the eighties which really makes me laugh. Milly doesn't usually get quite so wet but she does get sandy! She, for some odd reason, really loves when sand gets kicked up in the air. She will follow around right at your feet while you walk because she loves it so much. We started really kicking some up in the air for her and she went completely nuts, it might have been the cutest thing I have ever seen any dog go! I will post a video of it on our Facebook page sometime soon. 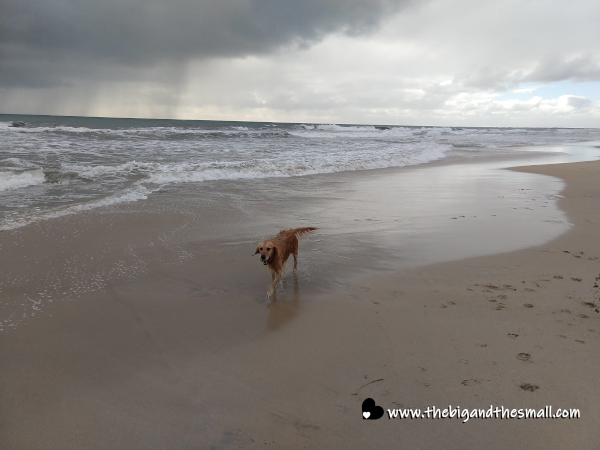 So there we have our four Australian animals keeping us company over the next few weeks. Cross your fingers for us that we don't lose any dogs to the ocean!