After our 13-hour layover in Malaysia (complete with a unique entree at McDonald's!) we boarded our plane and took flight for Perth, Australia a little after midnight. This time we were flying with Air Asia which was not nearly as comfortable and luxurious as our recent flights with Turkish Airlines but was completely adequate. I probably should have slept more than I did but I was wired and way too excited about getting to Australia!

We arrived at the Perth airport around 5 am local time, which puts us at 13 hours ahead of home time zone (Central in the USA.) It feels very odd to be living in the future! (But boy is it good for me getting blog posts done on time, they aren't "due" until 11 PM my time now!) After disembarking our flight we had to get our baggage and then go through customs. They are very strict here about bringing in outside food/plants/wildlife/etc - basically anything that could upset the local ecosystem. Not only do they screen all of your baggage you get checked by some very hard-working dogs! The very last barrier to entry involved standing in a line while a handler brought the dog around to sniff everyone's baggage. I was curious what the dog would do if it found something, and it turns out I got to see - they just sit down beside the luggage. (The lady in front of us had some medication that set the dog off, she just had to get a further inspection before leaving.) They had signs posted about not taking pictures at this point and I was not about to break any rules that could get me kicked out of Australia before we got in.

[Side note: Australia is the first place we've been where we had to get a visa! They were super easy to get online (took less than 10 minutes total) and cost twenty Australian dollars each, which came to about thirteen US dollars. They attach electronically to our passports and give us access to Australia for one full year, and we can come and go as many times as we want. The only catch? We can only stay for 90 days consecutively. So at or before 90 days, we have to step outside Australia, but then we can immediately come back if we want. Like, some people just book a flight to Bali, stay for a couple of hours, then come right back. We are hoping to make it to New Zealand while we are on this side of the world!]

Once we were released into the wilds of Australia we were picked up by one of our new hosts! We actually booked this housesit due to one we did at the beginning of this year. When we were in Street, England, the couple we were housesitting for were traveling to Australia to visit their daughter, her husband, and their three children. Now, we are here housesitting for that family as they go back to England to visit grandma and grandpa! After Heath picked us up at the airport we had about a 50 minutes drive south to get to their house.

We were exhausted, but we enjoyed meeting Emma and the three boys. With three kids, 2 dogs, a cat, and a lizard the house was a little chaotic, but in a good way! Before he went to work, Heath took us on a quick drive to the local beach, just to get us oriented a little. And I do mean quick - it's less than 5 minutes in the car! It had been storming all morning (was pouring down rain as our plane landed) but by this time the skies had cleared just enough to afford us a gorgeous first look at the ocean. 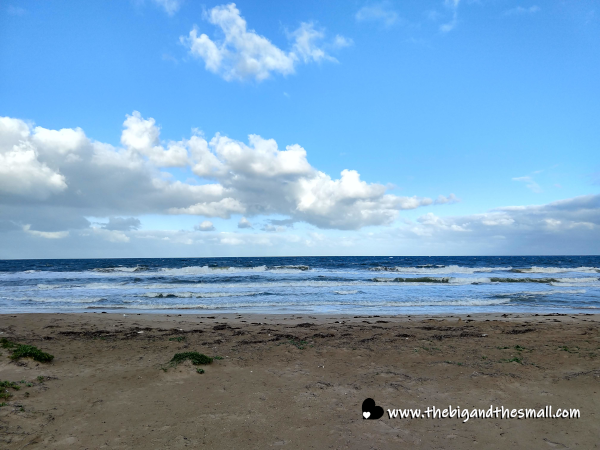 We went back to the house and while Heath went off to work and Emma got the boys off to school/daycare/herself to work, we promptly crashed in the guest room. After an overnight on a plane it was nice to have a bed again! We slept until the afternoon and got up just in time to shower and be presentable when Emma and the boys got home around 3. Then it was back to the beach, this time with the dogs! I will introduce all of the pets more thoroughly in a separate post tomorrow, but for now, just know that these dogs LOVE to play on the beach and actually go in the water! 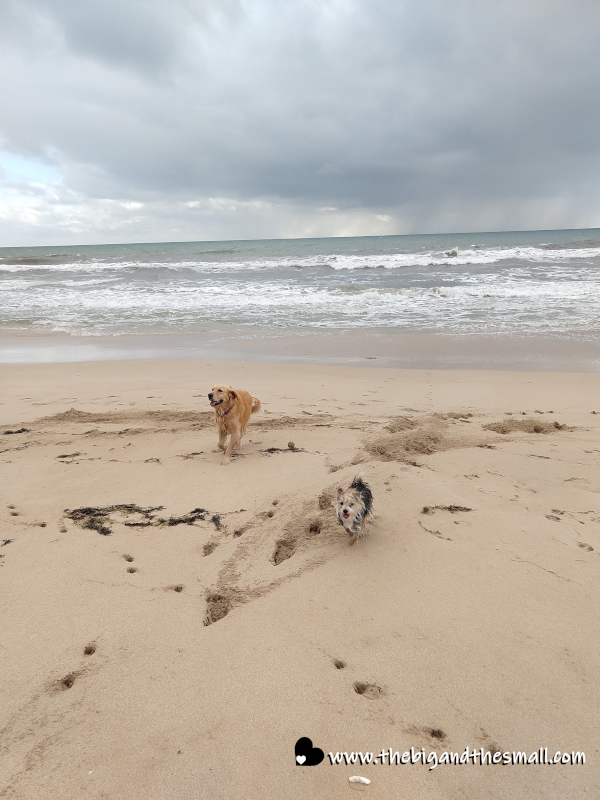 While we were there the clouds parted and there was the most beautiful rainbow. We could actually see the whole arc and where it began and ended! Pictures never do rainbows justice (at least with my photography skills) but if you squint you can see it in this photo. 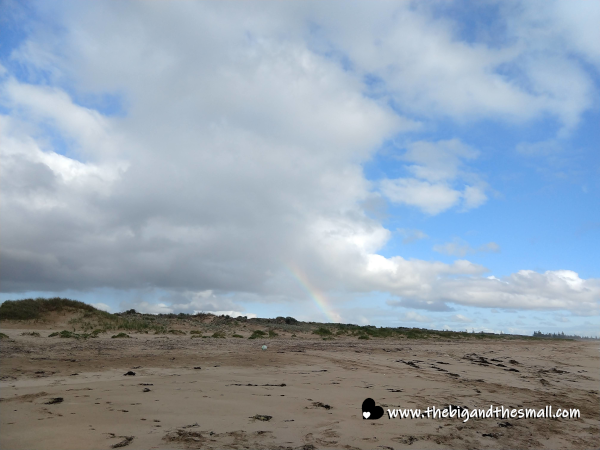 After the beach Emma took us to see some Kangaroos in the wild! Heath had promised us a glimpse of some on our way to the house from the airport earlier in the day...but all of the fields that usually have them were empty. Fortunately, Emma knew just where to go! There were at least a dozen kangaroos just hanging out in this field, eating the flowers and being entirely chill. I really wanted to see them hop, but even when Emma honked the horn to try and rouse them they just sat there. Kangaroos are about as common here as deer are back home, which is so hard for me to wrap my brain around! Emma even told us to watch out for them if we drive at night! 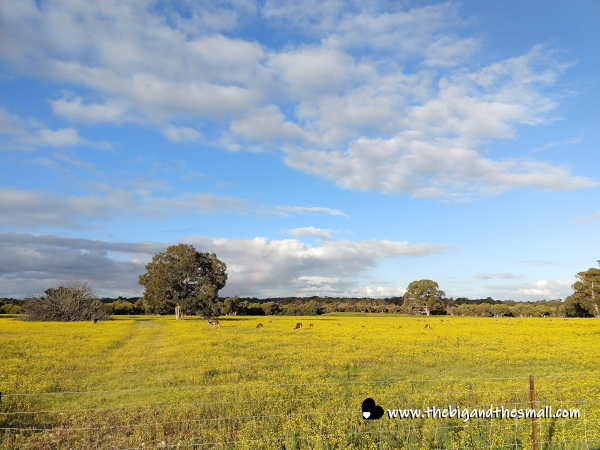 When we got back to the house Joel and I decided to go for a walk to check out the local area. We are about a 15 minute walk from a local shopping center/mall that has three different grocery stores and pretty much everything we could ever need while we are here! We do have a car to use while we are here, but for the most part, we try not to drive too much (walking = free, driving = paying for gas.) When we got back from our sojourn Emma had already fed the boys and laid out a fantastic spread for the adults! Despite sleeping most of the day we were still ready for bed around 9 PM - which is a good thing since it meant we weren't going to get on a weird sleep schedule. 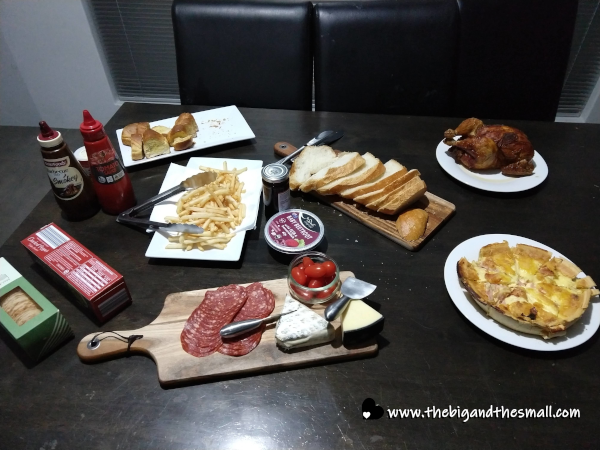 The next day we woke up after everyone had left for school/work, so we had some time to get to know the pets, unpack, and settle in. When everyone got home we had fun chatting about various things while they got ready to leave - their flight was at 11 pm so they left the house around 7. Heath and Emma planned to leave us some Australian money because we have to buy live crickets to feed the lizard (more about that tomorrow!) so the boys ended up getting out their piggie banks and showing off what Australian money looks like. It is so pretty! This is hands down my favorite money I have seen so far in all our travels. It makes US money look so boring. Plus it's waterproof! Heath said, "Leave it to the Australians to make money waterproof! This way if you go surfing with cash in your pocket it isn't ruined." 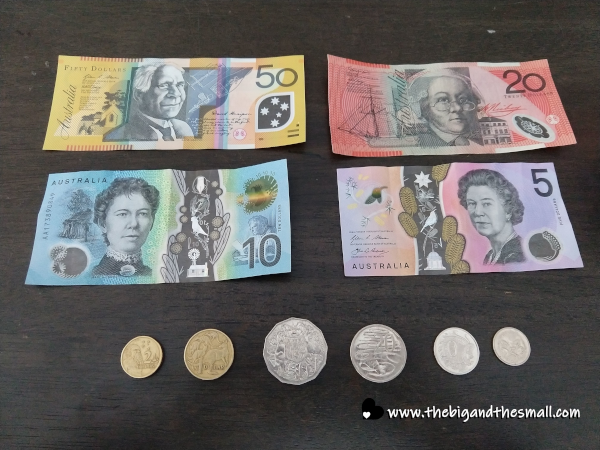 We also, somehow, ended up talking about a children's tale that exists down here. They call pacifiers "dummys" and have a tradition that helps kids let go of using them. The book is called "Minky Mary the Dummy Fairy" and it helps prepare kids for getting rid of their dummies. When they are ready, they put the dummies in a blue bag and hang it on the door handle. Overnight, Minky Mary comes to take away their dummies, and in their places leaves a small stuffed mouse! The boys had fun showing off the book and the littlest one (two years old, who had just done this not long ago) brought out his mouse for us to play with. It was so adorable. 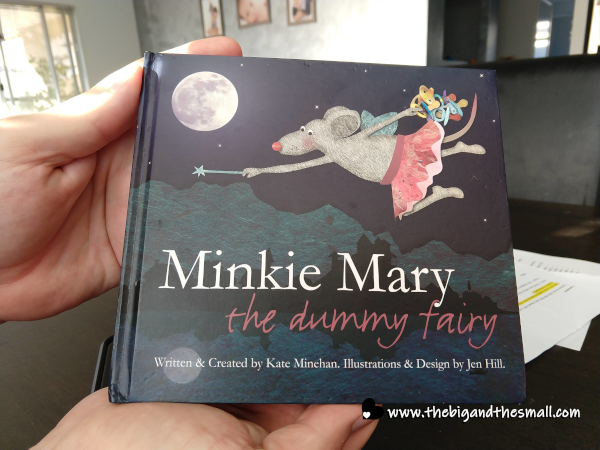 The rest of the evening was a whirlwind of preparing 5 people (of which 3 are children under the age of 8) get ready for an almost 24 hour journey to England where they will be for four weeks. It was exhausting just to watch, and made me very grateful that Joel and I travel as just the two of us! I hope the family has an amazing time in England and I know we are going to enjoy exploring our new temporary home in Australia!