After our relaxing stay in Thailand at a gorgeous hotel and eating Pad Thai on the beach four days in a row, it was time to move on to our next housesit in Perth, Australia. However, as part of getting there, we first had a flight to Kuala Lumpur, Malaysia and then a 13-hour layover before our overnight flight to Perth. Our transfer from the hotel to the airport was smooth (and the hotel even gave us a boxed breakfast since we had to leave before the buffet opened!) and our first flight was quick and easy. 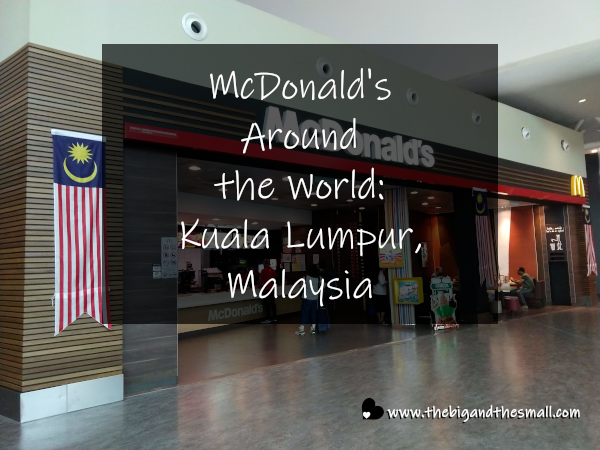 We arrived at the airport in Kuala Lumpur around 11 AM local time. Oddly, we had to go through security to get into the main waiting area of the airport (and then through a second round before getting to our gate later!) When we first booked our flight plan that included this long layover, I did some research on the airport in Kuala Lumpur and I actually got a bit excited. The airport has a rainforest in the middle of it! And a free movie theater! And a McDonald's! (yay for another McDonald's Around the World post!) When we arrived...well, it turns out that we were at the auxiliary airport in Kuala Lumpur. Which means there was no rainforest. And the movie "theater" was more of a general seating area with two TV's (one of which was completely broken and the other which had a big dark spot in the middle of it) playing the Fox movie channel with sound levels that could not be heard from even the first row of seats. It was a disappointment, to say the least. 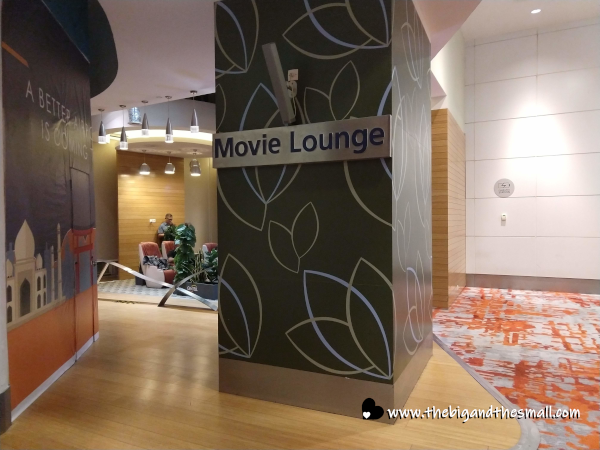 However, there was still a McDonald's so all was not lost! And this Malaysian McDonald's had by far the most unique food that we have found at a McDonald's abroad so far! I'm going to start with the dessert and the drink we got and work my way up to the main course. For dessert we got a McFlurrry - a typical dessert found at any McDonald's the world over. What changes, of course, is the toppings. When we were there they had a special flavor called the Cempedak McFlurry. Cempedak is a type of fruit that is native to southeast Asia, and in the McFlurry, it seemed to have been turned into some sort of jam. I was not a fan of it but Joel loved it. 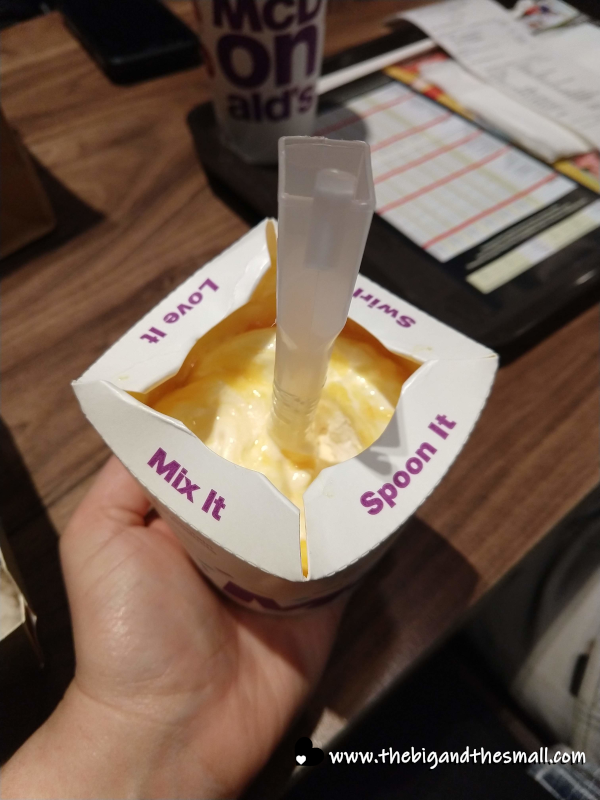 The drink we got was some sort of fruity ice tea. Again, I was not a fan, but Joel enjoyed it. Why yes, I am the pickier eater of the two of us, how did you know?! 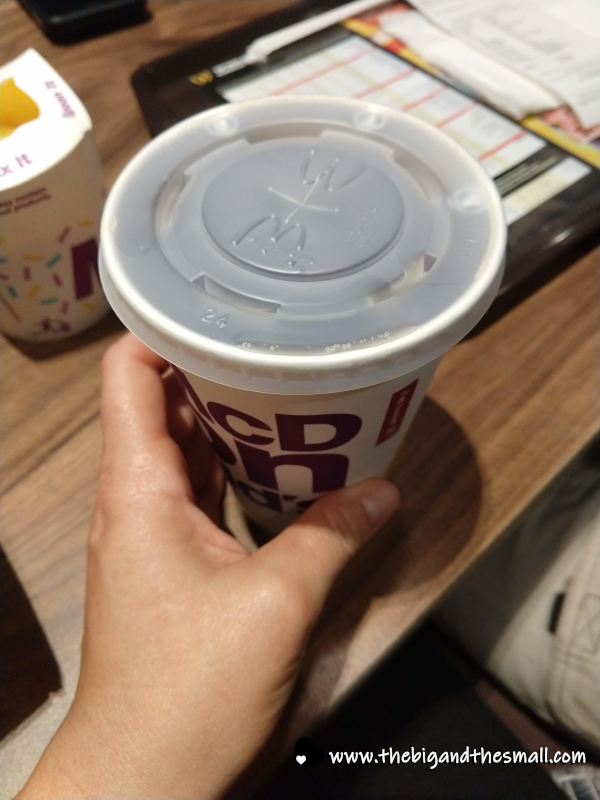 For the main dish we ordered something called Nasi Lemak, which turns out to be the national dish of Malaysia! It is commonly served at breakfast but can be eaten all day. The dish is traditionally composed of rice (usually cooked in coconut milk, not sure how accurate the McDonald's version is) topped with a hot/spicy sauce, fresh cucumber slices, small fried anchovies, roasted peanuts and an egg that is either hard-boiled or fried. Our McDonald's version came with all of the above except the peanuts which means, yup, we got fried anchovies at a McDonald's! 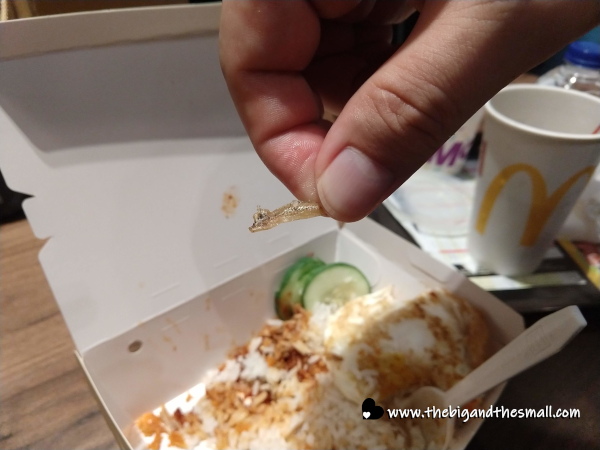 All of that is usually served in banana leaves but we just got a typical McDonald's food box. Often the dish is also served with some sort of meat - chicken, fish, or beef - ours cames with two fried chicken pieces.  The spicy sauce was indeed spicy - I like to think I have a decent tolerance for spicy food but one bite of that stuff left my lips tingling for quite a long time and my heartburn threatening to act up. The rice and cucumbers helped to cool that down and when it was all eaten in one bite it was pretty tasty. I even liked the anchovies kinda - to be honest before I knew exactly what they were I thought they were fried onions like you find on green bean casserole, lol. 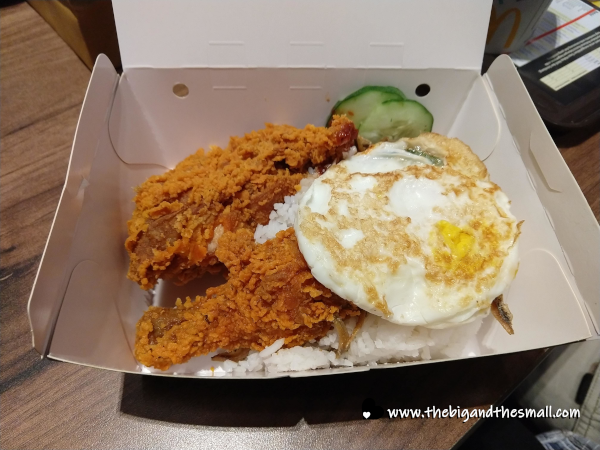 After splitting that meal we were still hungry, so we wandered around the airport looking for something else to eat. We debated on Burger King, a few noodle joints, and even a Popeye's chicken, but in the end, McDonald's had the best prices so we ended up back there for a second time. This time around we went traditional American with a Big Mac for Joel, a Quarter Pounder with Cheese for me, some fries,  a Coke (a regular one as they did not have either Diet Coke or Coke Zero) and a hot fudge sundae for me (since I did not care for the previous dessert.) I felt okay ordering some comfort food since I had stretched out of my comfort zone with that first order! 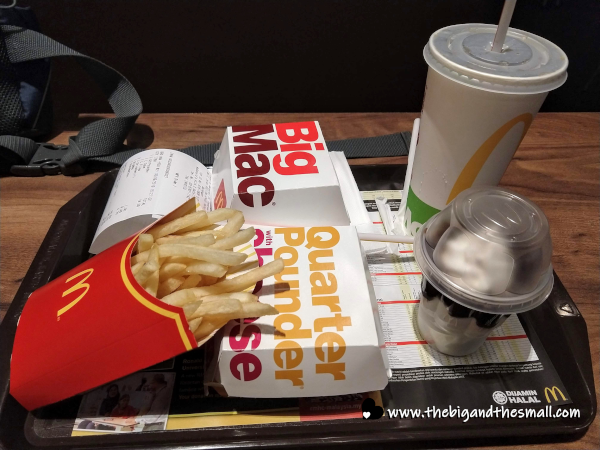 Even with eating at McDonald's twice that only took up maybe 2 of our 13 hours (and that's if I'm being generous.) The rest of the time was spent napping as able (yay for benches!), watching shows on my tablet (yay for Netflix and free wi-fi), and writing this blog post. We finally boarded our flight to Perth just after midnight! What a weird time for a flight to leave, right?