When we got out of hibernation mode and into exploration mode in Sofia we discovered something wonderful - eating out was very, very inexpensive! At first, we thought it was a bit of a fluke, that perhaps we had just stumbled across one exceedingly affordable food stand. But then it kept happening everywhere we looked! Eventually, we just full-on took advantage of it and started going downtown to eat every day. 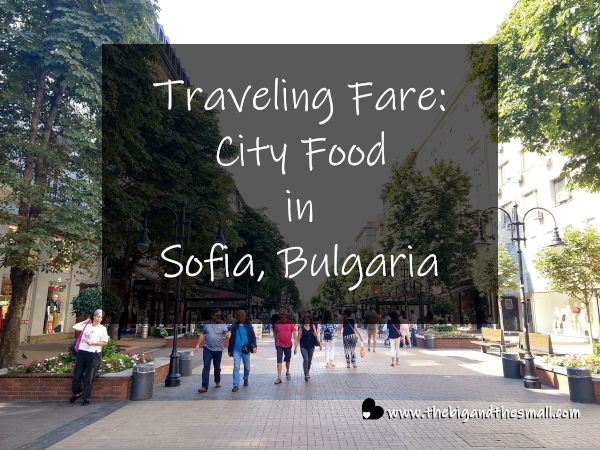 On our first day going downtown we arrived and realized we were very hungry. So before going on our Free Sofia Tour we stopped at the first food stand we saw because we were floored at how cheap the English Breakfast was. We got all of this food for only 4.50 lev which is about $2.25! The breakfast included 2 eggs, bacon, beans, cucumbers, tomatoes, a giant roll, and was enough to fill up both Joel and me. 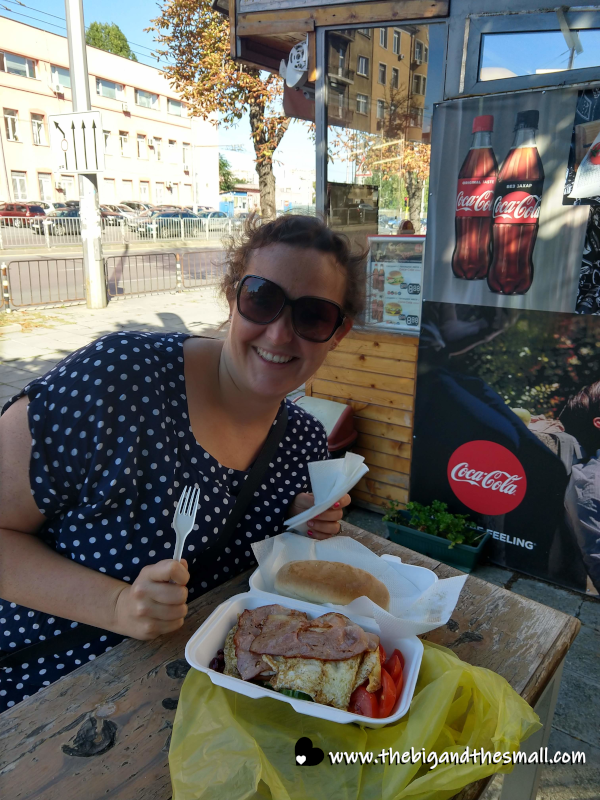 Later that day, after the tour, we hit up the same food stand to get a burger. Again, we thought that this was just a randomly cheap place and we hadn't really looked at anything else yet. Plus we had seen a sign for the burger when we got breakfast and it looked delicious. The burger was topped with sausage, bacon, cheese, an egg and cost 5 lev so about $2.50! I mean, really, I could not buy the ingredients and make this burger at home for anywhere near that price. 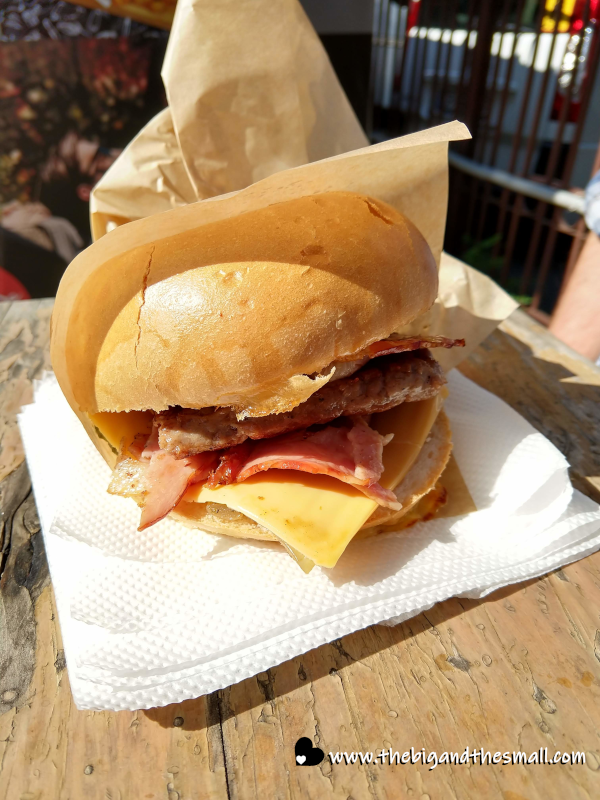 The next time we went downtown for the Free Jewish Tour of Sofia, we tried a pizza place that was right across from the Palace of Justice (the starting point for all tours.) We were so excited to find these decently large pieces of pizza for only 2 lev for the ham/mushroom, and only 1.50 lev for the veggie. That makes them clock in at $1 and $0.75! 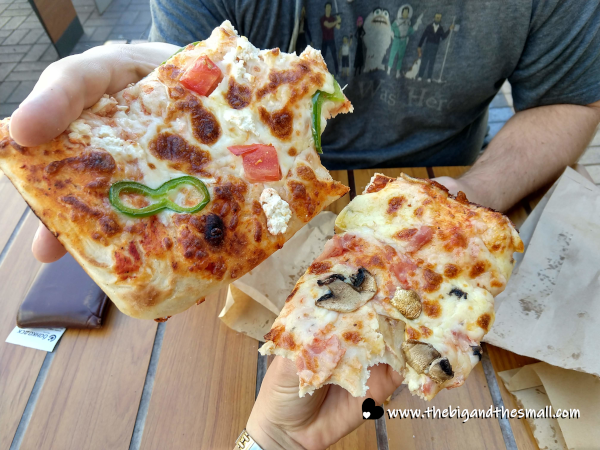 From the same place we also tried our first Bulgarian banitsa - a pastry traditionally filled with spinach and Bulgarian cheese. I love pastries, and especially savory ones, so this was right up my alley. Over the next week we tried all sorts of banitsa from a lot of different places - a fancy bakery well known for them on Google, a random food stall down by the subway, and everything in between - pretty much every version we had was delicious. 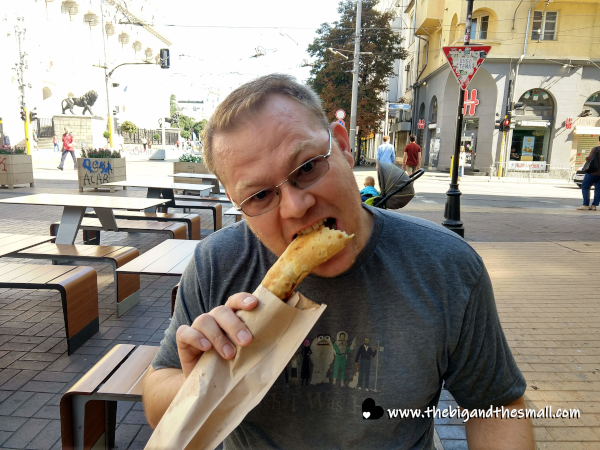 The next time we went downtown was the day all the things went wrong, and it took is far too long to finally get to some food. We ended up at a place on the pedestrian walkways called Miral Foods, which was a fast-food chain of sorts. We sent Joel in with a 10 lev budget (about $5) and he got three different sandwiches for that price! I'm glad it was cheap, though, as this was probably our least favorite place we ate. From left to right was a spicy veggie wrap, a chicken sandwich, and a falafel wrap. None of them were done well and the bread on the sandwich was kind of stale. We saved the rest of that day though by finding our favorite gelato place in Sofia. 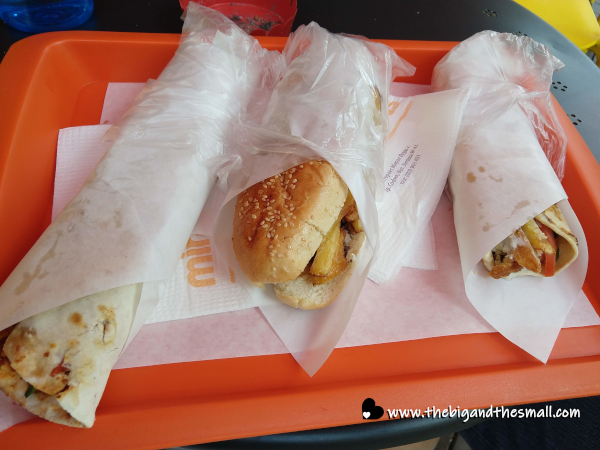 Often, as we walked around the city, when we found ourselves hungry we would just randomly grab a slice of pizza. These giant slices were available on every corner for about 1-1.50 lev (so about 50-75 cents!) So cheap! We noticed that when we saw locals eating the pizza it was often covered with some sort of white sauce. We wanted to try it, so we asked several vendors what the sauce was. Imagine our surprise when we learned it was just mayonnaise! Joel tried it on a bite and confirmed that it was just as bad as I suspected. We like our mayo, but it does not belong on pizza. 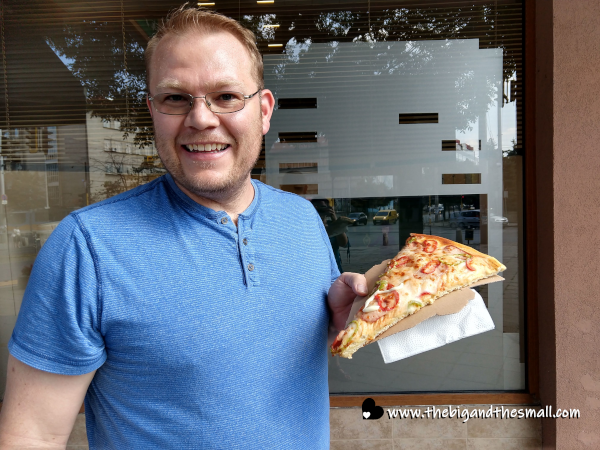 On another day, Joel was craving pancakes that he had seen signs for around the city. Turns out that by pancakes, they meant crepes. Instead of stopping at a roadside stand we went to an actual restaurant with seats and everything to try this one. The two ladies working were really friendly and spoke just enough English to help us order. 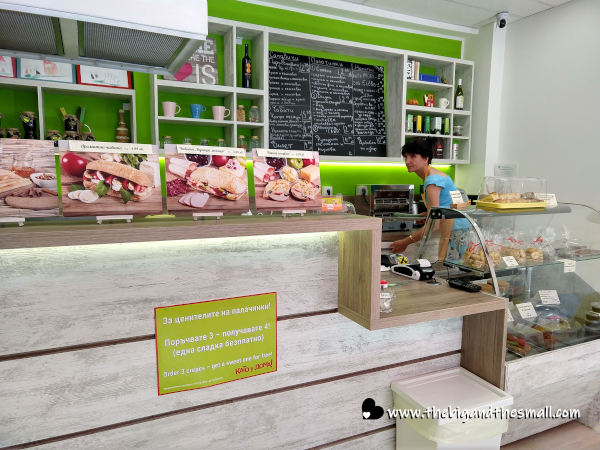 We went with two savory choices and two sweet. The savory ones were Bulgarian sausage and cheese (the best one!) and a turkey and cheese. My favorite sweet one was Nutella with walnuts. The other one was quite unique - rosehip jam and tahini. I have only encountered tahini in savory contexts (it's an ingredient in hummus) but in this crepe it was kind of like a sweet peanut butter. Rosehip are part of the rose flower, which Bulgaria is famous for, so it makes sense that they make jam out of it too! 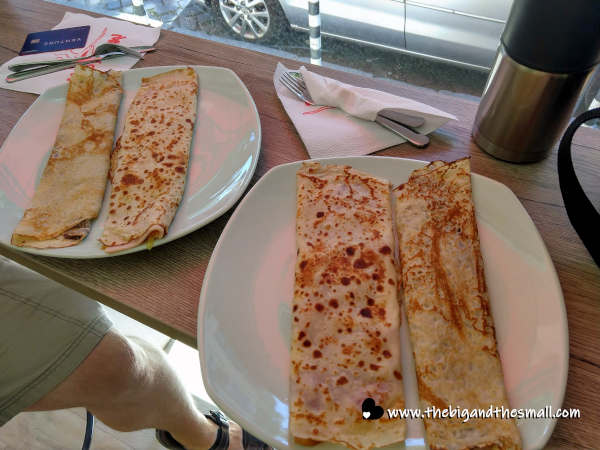 On the day that we ended up riding the bus to nowhere (while in search of a monastery we never found) we did find some excellent food. We couldn't buy as much as we wanted of it because we ran out of cash, but we got a good taste. First was a fried zucchini cake which seemed to consist of shredded zucchini mixed with some sort of batter then fried. It was served piping hot and I wish I could have had about 10 of them instead of just half of one (I begrudgingly let Joel try the other half.) 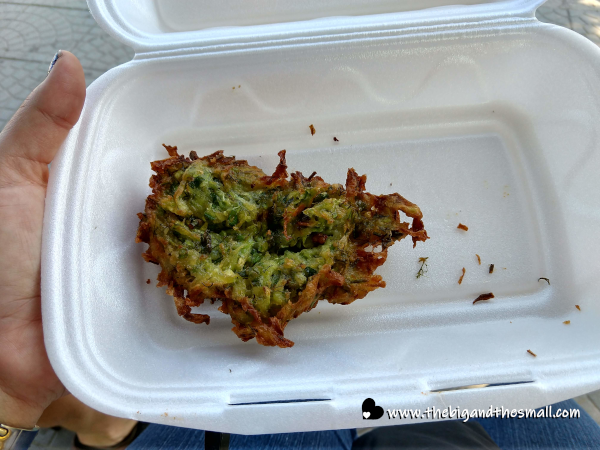 At the same place we tried something that the lady behind the counter told us was a traditional Bulgarian dessert. It was some sort of fried dough that I think had been soaked in honey. I wish I knew more about it but I can tell you this - it was delicious! 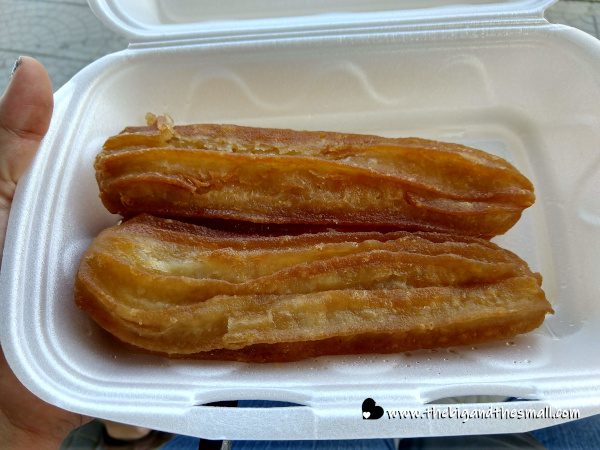 Perhaps our favorite meal ever (besides Senor Taco, which I went back to eat at on the last day) was a roadside stand where we grabbed some doner kebabs for super cheap. We had first tried this in London where Joel and I split one because it was like £7 for one (almost $9.) In Sofia, we got the same things for only 4 lev each which is only about $2. Each! We both ate and were full for only $4! I'm telling you, as cheap if not cheaper than eating at home. 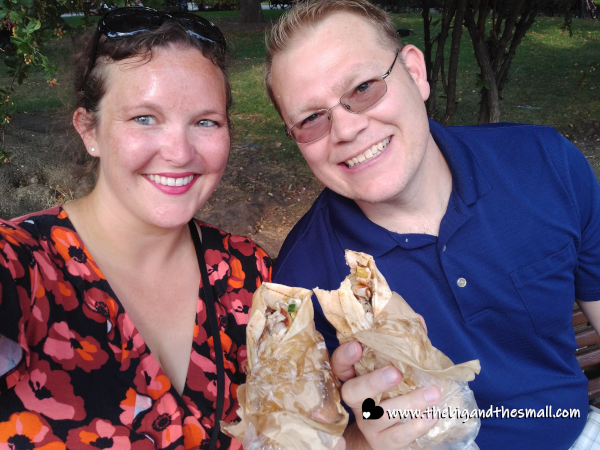 The last thing I want to share about is the gelato. We had just been in Italy, where we ate gelato every single day, and I was sure that whatever we found here would not be as good.  Well, thank goodness I was wrong. We tried several different places and they were all delicious. This cone had poppy seed gelato - a flavor I have never seen before - and it was great. The poppy seeds added a really interesting texture! 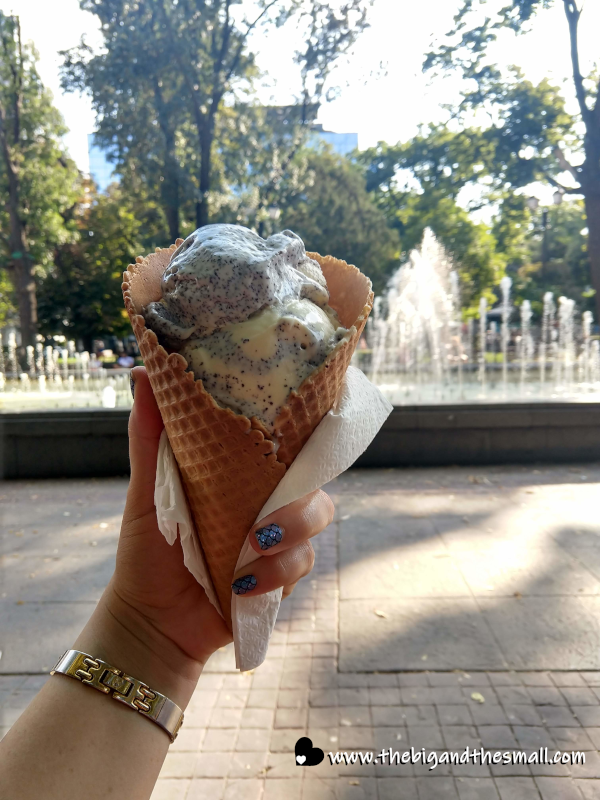 Our favorite place, however, was on the pedestrian walkway. They had a pistachio gelato that was almost as good as the one we had in Italy and a chocolate cake batter flavor that became my second favorite gelato of all time! (After the pistachio of course.) We got this cone several times and made sure to get downtown and eat it on our last full day in Sofia. 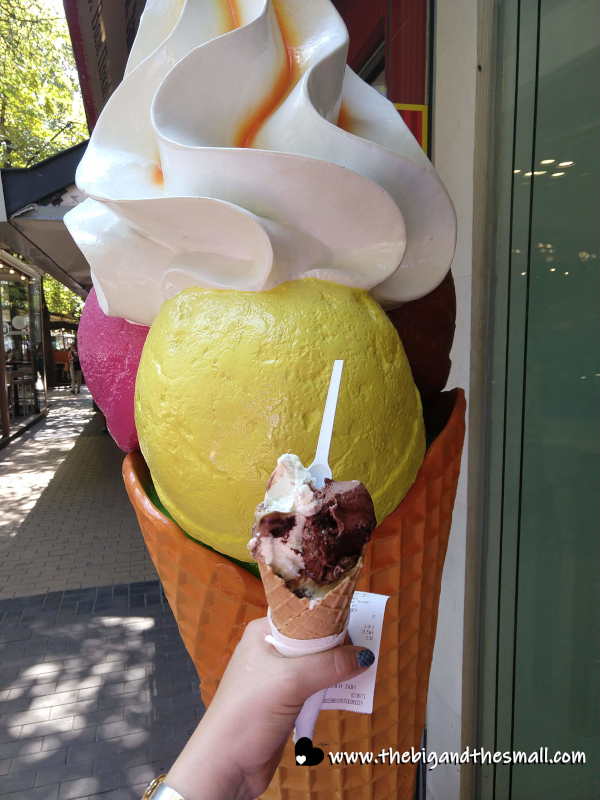 This isn't everything we ate in the city of Sofia but it is a pretty good representation. Joel and I were able to eat plenty of delicious food for a daily cost of about $6 total. Not each, total! The city is so incredibly affordable it's almost unbelievable. We really think Sofia, Bulgaria should be added to every European traveler's itinerary!

I totally want to add Bulgaria to my list of to-visit cities. I'm surprised by how many people you encountered that spoke English.

Sofia is the Best!

Yes, I think you and Shawn would really enjoy Sofia! We were also surprised by how many people spoke English as we had been warned that many didn't. I'd say it was definitely a higher percentage than when we were in France (though we were in rural France so take that for what you will.) Once we got the hang of things I was shocked at how easy the city was to navigate and it really seems friendly and open to tourists! I hope you guys go someday!