I've mentioned in passing in several of my posts about Bulgaria that I did not do a lot of cooking while we were there. Usually, I do cook a lot as grocery shopping + making our own food at home is almost always the cheapest way to eat. In Bulgaria, however, the options for prepared food were so prevalent and so inexpensive that it made just as much sense (if not more!) to skip cooking and let someone else do all the work for me. It was great! 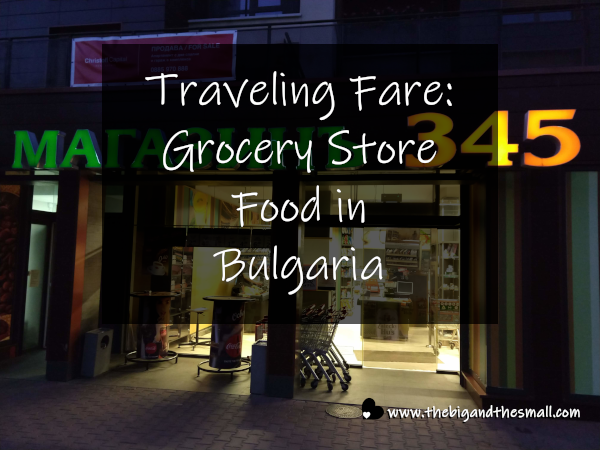 When we were in hibernation mode in Bulgaria (read about what I mean by that here) we got most of our food from the grocery store that was about a seven-minute walk from the house. I'm not sure what the real name of it was since the sign is in Bulgaria, but we just called it "345" for obvious reasons. 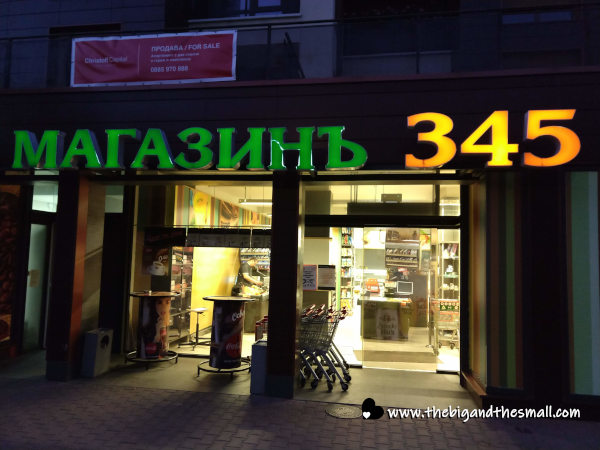 Of all of our grocery shopping experiences in all the countries we've been to, this one was my favorite. Why? Because there was one awesome worker there who became our friend! The first time we went there Tony started speaking to me in the vegetable aisle and at first, I could not understand him. "English?" I asked. "I am speaking English!" he said, in perfect English. Tony could speak English so well, in fact, that I didn't understand him at first because he was speaking so quickly. We immediately chatted with Tony for a while and he became our guide to all things 345 and Bulgarian food. He's the one that clued us in to the fact that after 9pm, all of the prepared food at the deli counter goes on sale at 50% off! We thought it was well-priced to begin with, but 50% off made it actually cheaper than buying and making our own food. 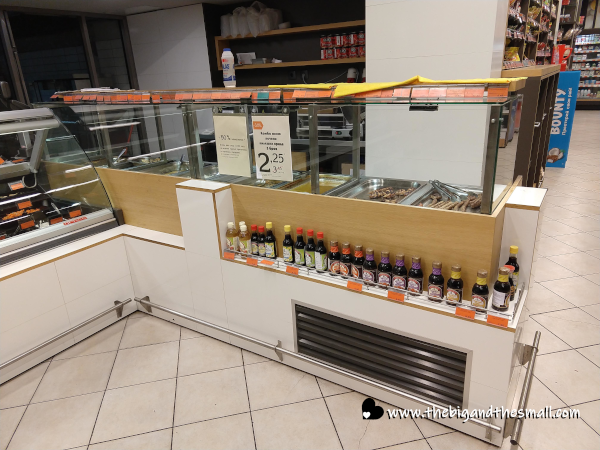 From then on I made breakfast at home, then we would get dinner from 345. We tried almost everything they had available, most of which we loved. My absolute favorite thing was a dish that was chicken & mushrooms in a white sauce - but sadly they only had it once and I never got to eat it again. The biggest miss was a dish that the lady behind the counter told us was "chicken" but when we tried it turned out to be "chicken liver" and neither Joel and I like that very much. Our favorite staple was these amazing stuffed peppers - they were roasted and stuffed with a rice/beef mixture, were always delicious, and re-heated easily at home. 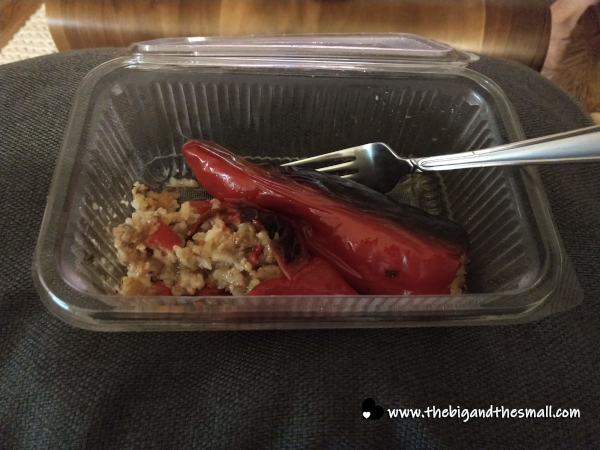 Almost always they would have a moussaka like dish that was spiced ground beef, diced potatoes, topped with cheese. When we started going after 9pm it was hit or miss whether or not we would get any as it often sold out. I understand why, it was delicious! 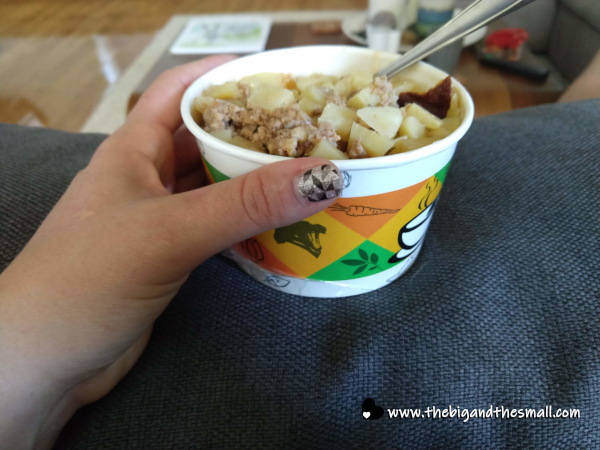 The weirdest thing they had I somehow didn't get a picture of, which is too bad. When we bought it, we thought it was macaroni and cheese because, well, that's what it looked like. Mac and cheese is literally my favorite food so I was so excited to try the Bulgarian version of it! I took one giant bite and almost spit it out because it was sweet! It tasted like mac and cheese baked with some kind of custard it was so odd and not at all what I was expecting. The next day we asked Tony about it and he said, yes, it is a sweet mac and cheese and is a Bulgarian specialty. I'm glad I can say we tried it, but I am definitely not a fan.

This stuffed meatloaf was also kind of odd, but not as odd as sweet mac and cheese. There were full hard-boiled eggs baked inside the meatloaf! 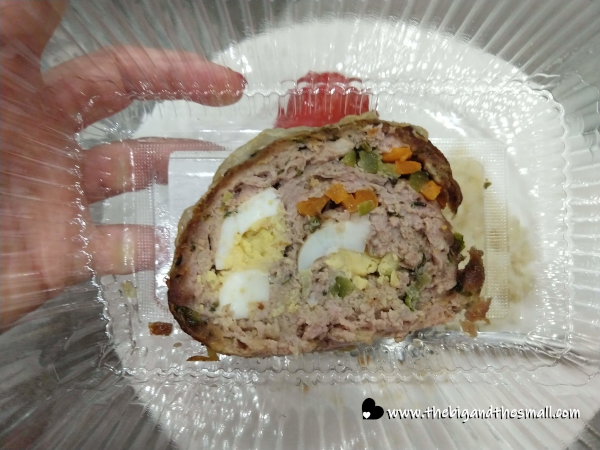 Most times our meals from 345 consisted of a stuffed pepper and whatever meat/rice dish they had on hand that day. On this plate, the rice had pork in it, and I topped it with a chicken/vegetable/sauce mix. I don't think they were meant to go together but they did really well. There was also a bit of pork. They had cooked pork chops that, when on sale, cost only $0.50 each! Like I said, this stuff was crazy cheap! 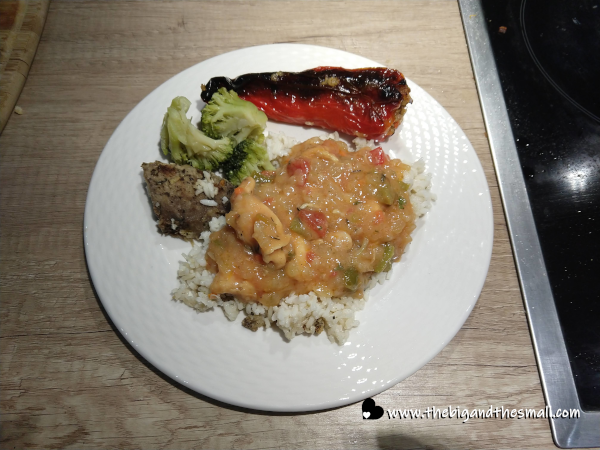 This plate contained my favorite meat dish from 345 - the kebab. The meat on it was some kind of pork, and I think it was wrapped in bacon, plus peppers. The meat was always charred just right and practically melted in my mouth. So good. Just under the kebab is something they called "mish-mash" which was red and green peppers sauteed with Bulgarian cheese (which is kind of like a mild Feta.) We learned our favorite use for that was to add it to our scrambled eggs in the morning. To the right of that is a chicken leg with cooked cabbage (good on it's own, and I turned some leftovers of it into a really good soup.) Then there is a pork and vegetable mix. 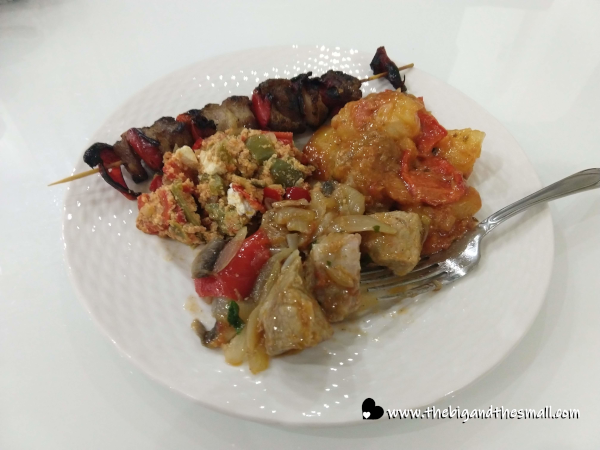 Usually, our dinner from 345 consisted of some mix of all the dishes you see above, we bought from whatever was left after 9PM! As we got to know Tony more every time we went there, eventually he started suggesting other things in the store for us to try. He really enjoyed introducing us to very Bulgarian things that most tourists wouldn't even know to try. The first was this dessert which is made from sunflower seeds. 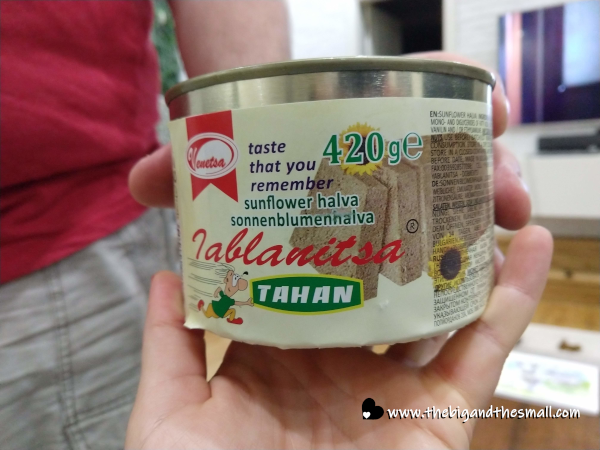 It looks like cat food, but don't let that deter you! The taste is very sweet, even Joel (who used to eat sugar straight) couldn't eat a lot of it at once. Have you ever had a Butterfinger candy bar? The best way I can describe this dessert is that it tastes like the inside of a Butterfinger (so, without the chocolate.) I actually didn't care for it much, but Joel started adding it to vanilla ice cream and really liked that. d

Tony also had us try a drink that is very unique to Bulgaria. It's called Boza and is a sweet fermented wheat drink with very low alcohol content (around 1%). It looked and smelled unappetizing and I never worked up the courage to try it. The texture was very thick, Joel said it was like chia seeds. The taste was apparently like a weird coffee latte with pieces of bread soaked in it. I wish I had gotten a picture of it but somehow in the hilarity of watching Joel try it (the faces he made were great), I apparently didn't take any.

For the most part we really enjoyed everything we tried from the grocery store deli counter! I really enjoyed getting to take a break from cooking, trying local food, and saving money in the process!

Which of these foods would you be brave enough to try? Is there anything you would skip? Do you like to try new things in a new country or stick to what you know?

Thanks for the summary and yay for Tony! He sounds fun. I wonder if the sunflower stuff would be good as a piece taken as a component to something less/not sweet to mediate it? Seems like a fun adventure though!

Yes, Tony was extremely awesome! I agree that it should be more of an ingredient in a dessert rather than a stand alone dessert by itself. I think with chocolate (therefore making it more like a Butterfinger) would have been great!